Amazon’s second-gen earbuds are improved in almost every way

Share All sharing options for: Amazon Echo Buds review: very hard to beat for the price

Amazon’s new second-generation Echo Buds are the company’s second crack at true wireless earbuds. They’re smaller, lighter, and more comfortable than before, and now have more effective noise cancellation. The first time around, Amazon borrowed some of Bose’s tech to help the original Echo Buds block outside noise, but version two was built completely in-house. Hands-free Alexa voice commands still get top billing, but the most compelling thing about the Echo Buds is still their aggressive price — and the solid mix of features you get in exchange.

The Echo Buds cost $119.99 or $139.99 with a wireless charging case. During the preorder period, Amazon offered both for $20 off. Not only is Amazon undercutting premium noise-canceling buds from Apple, Bose, Sony, and others, but it’s also seemingly trying to obliterate mid-range options like the Anker Liberty Air 2 Pros. 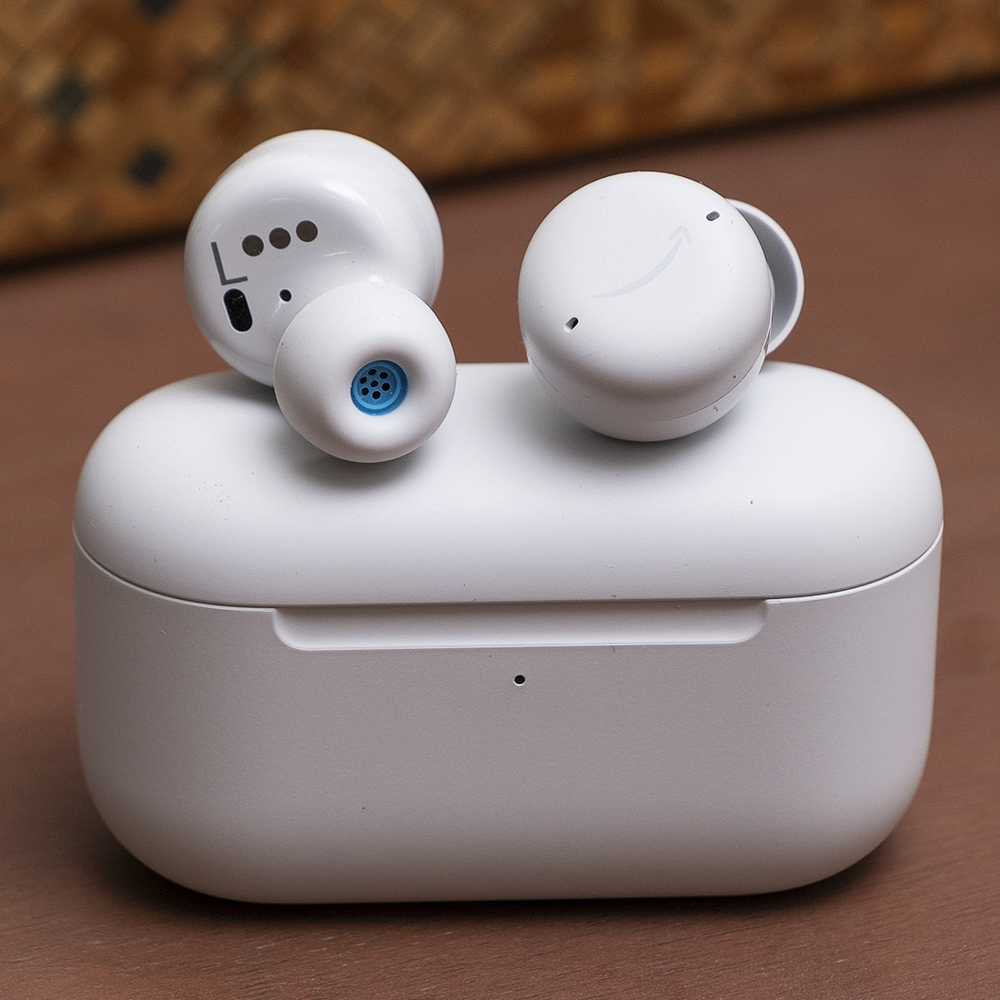 The revamped Echo Buds are 20 percent smaller in footprint and have a shortened nozzle, so they protrude from the ears a bit less. They ditch the glossy outer touchpad for a matte design (though the side facing your ear is glossy) The Amazon “smile” logo is present on both earbuds, but it’s not as obnoxious as I assumed it’d be. It’s matte and printed onto the buds instead of being embossed or given a different texture to stand out, so the logo doesn’t really call attention. Still, I’d have preferred it not to be there at all. The charging case is far more understated; there, the smile logo is on the underside — where most people are never even going to see it.

That case has also been downsized and is roughly 40 percent smaller than the last gen, but still carries enough juice to provide the earbuds with two full recharges. The Echo Buds last for five hours with ANC enabled, which is extremely par for the course in 2021. This stretches to 6.5 hours if you disable noise canceling and hands-free Alexa. Oh, and the case does charging LEDs right: you get separate indicators for the case’s charge and both earbuds also have their own.

Amazon has included everything but the kitchen sink to help guarantee a good seal and snug fit. There are four sizes of silicone tips in the box — S, M, L, XL — and three different pairs of optional wing tips. The ear tips are color coded, which makes it much easier to tell the different sizes apart without having to squint at them. The wing tips might prove useful if you’re going to use the Echo Buds for intense workouts, but they weren’t necessary for everyday use or outdoor runs in my ears; the reduced size of the earbuds was enough to keep them locked in place for me.

The new Echo Buds now feature a vented design to cut down on ear pressure, similar to Apple’s AirPods Pro and recent Samsung Galaxy Buds models. But the flipside of this change means if you turn off ANC in the Alexa app (or with a voice command), you’re going to hear a fair mix of ambient noise. If you want to hear more, Amazon gets credit for its passthrough mode, which nearly matches the AirPods Pro and Bose in how natural sound it sounds. If you crank it up all the way, it almost feels like superpower hearing — but there’s a very noticeable hiss at max passthrough.

Amazon claims that the second-gen Echo Buds cancel out “twice as much noise” as the original pair, and the improvements are most concentrated in lower sound frequencies — exactly what you’d want for flights or bothersome hums around the house or office. But remember that the original Echo Buds utilized Bose’s noise reduction technology, which isn’t the same as full-blown active noise cancellation. (Even at the time, Bose said it could do better.) So while Amazon is advertising significant gains over the prior model, you won’t hear any claims that it’s outperforming earbuds from Apple, Bose, Jabra, or other companies. Those are different goalposts.

And the Echo Buds objectively aren’t as effective as the AirPods Pro or Bose QuietComfort Earbuds at turning down the volume knob on the outside world. You might assume that it’s because of the vented design — but the AirPods Pro have that design trait too — so it’s really just that Amazon’s proprietary noise cancellation tech doesn’t yet measure up to the best out there. Occasionally when holding the Echo Buds in my hands, I’d hear a high-pitched whine or squeal coming out of them. This has happened with other earbuds, and Amazon tells me it’s due to an ANC-related feedback loop. Amusingly, I’m also told there’s a “squeal detection algorithm” that’s meant to suppress this. The noise is never really a bother when they’re in your ears, thankfully, but it does pop up from time to time.

Passable ANC aside, the Echo Buds do sound good. They handily beat out the AirPods Pro at bass, which is becoming a regular occurrence at this point. Amazon says the 5.7mm drivers are “optimized for increased fidelity in bass and treble,” and they make for easy listening when you’re playing spoken word content like podcasts, audiobooks, or watching videos. All of this proves out as true when using them. The bass has ample kick and the treble is well contained and never gets earsplitting. Tracks like Lil Nas X’s “Montero (Call Me By Your Name)” or Dua Lipa’s “Don’t Start Now” are perfect demonstration of what the Echo Buds are good at. I get the impression that Amazon has tuned these with modern hits in mind.

The Echo Buds can technically be paired over Bluetooth and used without agreeing to anything in software, but you’ll be stuck with reduced functionality in this mode without hands-free Alexa support or any way to customize the controls. To access those features, you’ll need to download the Alexa app for iOS and Android. An Amazon account is required to sign in. By signing up for one of those, you must agree to its conditions of use.

Final tally: No mandatory agreements, but 13 optional agreements that border on mandatory.

But they do lack a layer of depth and texture that you’ll find in the higher price tiers of true wireless earbuds. Acoustic-heavy tunes aren’t as warm as they could be, and tracks like Phoebe Bridgers’ “Graceland Too” don’t have as wide of a soundstage. The powerful bottom end can make up for that somewhat on songs like “Chinatown” by Bleachers, where the bassline never gets lost to the synths, vocals, and guitars.

So even before you get to the Alexa part of the equation, the Echo Buds establish themselves as worthy contenders at a hard-to-resist price. They also offer IPX4 water and sweat resistance, and voice call quality has improved some over the first-gen buds. Audio automatically pauses when either bud is removed, and each side can be used independently. Like most earbuds (save for those from Jabra), the Echo Buds lack multipoint Bluetooth pairing. Both AAC and SBC codecs are supported. Connection stability has been rock solid in my review period so far with only the rarest blip or dropout.

But how does Amazon’s voice assistant fare? Alexa can aptly handle music requests (“play my Release Radar on Spotify”), weather checks, smart home commands, and other activities that are normally smooth sailing on Echo speakers. Amazon says “later this year” the Echo Buds will get the same VIP Filter as its Echo Frames, which lets you pick which notifications you want to hear.

But on the whole, Alexa noticeably lags behind Siri and Google Assistant at more on-the-go requests. If you ask for directions, Alexa responds that you must tap a notification on your iPhone for those directions to actually open up in Apple Maps. It’s not a huge inconvenience, and some of this — like SMS messaging being limited to Android — boils down to platform restrictions, but there are often middle steps that don’t exist if you’re making the same ask of Siri or Google Assistant. (You also must grant the Alexa app full-time location access for directions to work.) It’s nice that I can ask these earbuds where the nearest COVID-19 vaccine site is or inquire about the status of a given subway line, but these are the kind of things that I’m always going to use my phone for. Getting people to change that default behavior is no small hurdle.

There were also bugs where I didn’t expect them. When I would say, “Alexa, turn on noise canceling,” it would often respond “sorry, what device?” Apparently “noise cancellation” is the term you’ve got to use, but it seems obvious that both should get you there. This was never an issue with voice commands asking to enable or switch off passthrough mode, which worked every time.

Amazon says it has built in a number of privacy-minded features to limit how often the microphones are listening for the “Alexa” wake word. At least one of the earbuds needs to actually be in your ear for the mics to function — they’re automatically muted when both are removed — and there must be an active Bluetooth connection to your phone. You can also manually mute the mics with the Alexa app or by customizing a long-press to do that.

Though Amazon promotes hands-free Alexa as a flagship feature of the Echo Buds, I think it’ll be a negligible value add for some buyers: the price, comfort, and sound are still enough to make these earbuds quite enticing. You’ve also got the choice of using your phone’s native assistant instead of Alexa, which is another option for the long-press command on the outside of a bud. So at least Amazon isn’t forcing anything on you.

If you don’t have an inherent resistance towards Amazon products (and some people certainly do), the 2021 Echo Buds strike a balance of features that’s downright impressive at their selling price. They’re a considerable upgrade from the first-gen earbuds in comfort with improved noise cancellation to boot — even if it’s not close to best in class. You can do better if you’re willing to spend upwards of $50 to $70 more. If you don’t want to go that high, the Echo Buds won’t disappoint.