If you’ve got an Apple TV, it’s a must-have upgrade

It’s so, so, so much better. But the moment Apple showed off the second-generation Siri Remote, it was obvious that this would be a huge improvement over its detested predecessor. It’s easy to tell which way is right side up when you reach for it. The clickable touchpad area that dominated the upper third of the prior remote has been replaced by a more intuitive D-pad. The Siri button has been pushed to the remote’s right side, almost guaranteeing that you’ll never unintentionally trigger Apple’s voice assistant. And now there’s a proper power button for your TV.

Listing all of these “upgrades” on the new $59 Siri Remote really illustrates just how disappointing the old one that somehow lasted six years on the market was. Before this big redesign, the most Apple did in that time was to try to cure the “which side is up?” confusion by adding a white rim around one of the buttons. “Can’t innovate anymore, my ass.”

But this? This new Siri Remote is a very good remote. There’s nothing exceptional about it, but it’s functional, accessible, and painless to use. If you used those words to describe the original Siri Remote, you’d be in the minority. 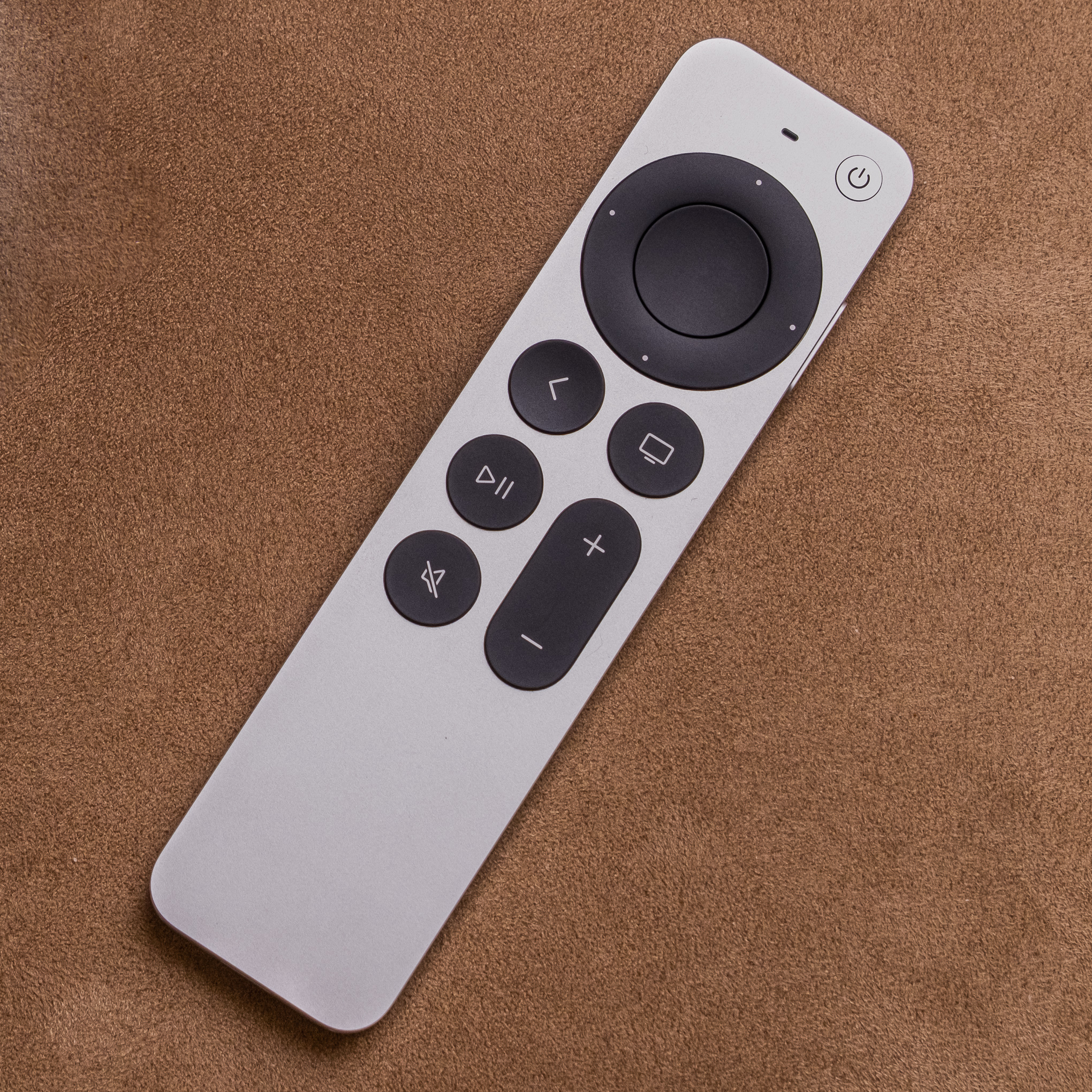 It feels really nice, too. Apple makes the remote from a unibody aluminum shell that’s taller, heavier, and considerably thicker than the old Siri clicker. It’s slightly narrower than the black remote but still feels larger on the whole — and that’s a positive. The previous Siri remote was so thin that it was easily lost to the deepest reaches of the couch. I don’t see that being as much of a problem with the new, chunkier hardware.

The Siri Remote is in keeping with Apple’s renewed fondness for hard edges. With the remote gripped in hand, you never really feel the edges on the front, but you do at the back. The back metal is curved, but there’s still a hard edge at both sides. As long as you don’t squeeze the remote too tight, it should prove reasonably comfortable.

Instead of putting what basically amounted to a trackpad on the top section of the remote, Apple has switched to a much more traditional directional pad. Within that circular D-pad is a touch-sensitive center button that still lets you swipe around content or move in any direction just like you could before. (And yes, you can still play with the subtle movement of app icons on the home screen by gently nudging your thumb around.) But some streaming apps didn’t work perfectly with that input method, so Apple is now including the far more precise D-pad.

This choose-your-preferred-navigation method — Apple calls it the “clickpad with touch surface” — has a very short learning curve. Initially, I would inadvertently activate the touchpad when I just meant to move my finger from down to up or vice versa on the D-pad. That didn’t last long, but if it winds up a bigger hassle for you, there’s an option in the remote’s settings menu to assign the center button to “click only,” which gives the D-pad all navigation duties.

Apple has also come up with a clever jogwheel function that lets you circle a finger around the outer ring to scrub through videos at faster or slower speeds depending on how quickly you’re thumbing around the circle. It’s a direct callback to the days of the iPod clickwheel and does a great job helping you land on an exact moment in a video.

But I must confess something: I had an embarrassing few hours where I couldn’t figure out how to make this work. Eventually, I learned the trick: after pausing a video, you’ve got to rest your finger on the D-pad momentarily before you start circling around it. An animation will pop up in the progress bar (with a little dot that indicates where your finger is) to let you know you’re in jogwheel mode. If you just pause the video and immediately start the circular movement, it doesn’t do the right thing. Don’t be like me and unnecessarily factory reset your Apple TV 4K because of this.

The buttons themselves all have a satisfying click and don’t feel the least bit mushy. The clickpad is quieter when pressed than the buttons below it, which are each significantly noisier than any other remotes I had to compare against, be it for a Roku, Chromecast, or otherwise. Again, it’s not a problem unless you’re sensitive to that sort of thing, but you’ll absolutely hear the volume rocker when you’re turning up a certain scene in a movie or show. The Siri button on the side is whisper quiet; you still have to press and hold it down whenever you’re doing a voice command.

You might also have to overcome some muscle memory challenges since the mute button is now where play / pause was situated on the old remote. The “menu” button has been rebadged as “back” but does the same functions as before, which means, in most cases, the new icon makes a ton more sense. The buttons aren’t backlit, but it’s easy enough to memorize them by feel once you’ve used the remote for a while.

But as good as the new Siri Remote is, it feels like Apple missed some opportunities that frankly seem like low-hanging fruit. The most glaring is that there’s no way to locate the remote if you’re unable to find it. As I said earlier, the bigger dimensions should make for fewer instances where the remote gets misplaced, but some way of having it alert you to its location would’ve been nice. “Hey Siri, where’s my remote?” seems like such an easy thing to make happen, but that voice query won’t do you any good or make the remote beep. And unlike Apple’s recently introduced AirTags, there’s no ultra-wideband chip in the remote to help pinpoint its position in a room. If you’re finding that the remote goes MIA constantly, you might just have to settle for a case that combines an AirTag with the Siri Remote. But having a simple, straightforward remote locator feature is one area where Roku objectively beats out Apple.

A less impactful gripe is the lack of an input button for switching between HDMI sources; the Apple TV automatically becomes the active input when you power it on or wake it from sleep. But an input button would’ve at least made life easier for people switching between an Apple TV and an Xbox or PlayStation. As a result, I just can’t quit my LG TV’s remote, much as I wish I could. Most of my devices automatically grab the TV’s attention when they’re switched on, but a button is foolproof.

I can complain about buttons being absent, but I can also praise Apple for the same reason: there are no branded shortcut buttons whatsoever on the Siri Remote. Not even Netflix can lock down its own button, whereas you’d be hard-pressed to find another streaming box remote without that logo somewhere.

The Siri Remote is an accessory to the Apple TV 4K and Apple TV HD. By setting those devices up, you’re agreeing to:

You can optionally agree to:

The final tally is four mandatory agreements and two optional.

The Siri Remote still charges with Apple’s Lightning connector — despite now being thick enough to house a USB-C jack. USB seems more natural for this type of scenario, but what do I know? I’m just one man who’s elated to have a reliable, sensibly designed remote control again. Apple is going to keep doing Apple things. I was not able to test the new remote with third-party charging stands designed for the old one, but I wouldn’t be surprised if that industry catches up with the new design in the near future.

The gyroscope and accelerometer from the previous Siri Remote are history, so you won’t be able to use this one for Apple Arcade games that rely on those sensors. But it’s unlikely many people were gaming with it to begin with; tvOS now supports many third-party gamepads, including the latest Xbox and PlayStation controllers, if you hadn’t heard.

Any way you slice it, the new Siri Remote is a win on every level. It’s inconceivable that we put up with the last one for so many years, but its time has come. And the remote control taking its place is extremely good at doing remote control things. Much as how Apple’s M1 MacBooks would have earned perfect scores if they’d had competent webcams, the Siri Remote would be flirting with perfection if it just had some way of letting you easily find the thing. Or if the buttons were backlit. My review of the new Apple TV 4K is coming soon, but if you’ve already got the last model, this is the only real must-have upgrade to go for.