Lenovo’s Tab P11 Pro is the company’s top-tier Android tablet. With an 11-inch OLED screen, quad speakers, and snap-on keyboard, it’s meant to go head to head with Samsung’s Tab S7 and Apple’s iPad Air. But while the Tab P11 Pro is excellent for watching movies — that OLED screen and the Dolby Atmos speakers are quite nice — it’s considerably less impressive when you attempt to use it for productivity.

Pricing for the Tab P11 Pro is aggressive, particularly when you add up everything you get. The list price for a base model with 128GB of storage and 4GB of RAM is $499.99, but thanks to Lenovo’s frequent discounts, you can buy one for $375 right now. The model I’ve been testing has 6GB of RAM and comes with a detachable keyboard and active stylus pen in the box. That one’s list price is $599.99, but it’s currently discounted to $460 on Lenovo’s site. 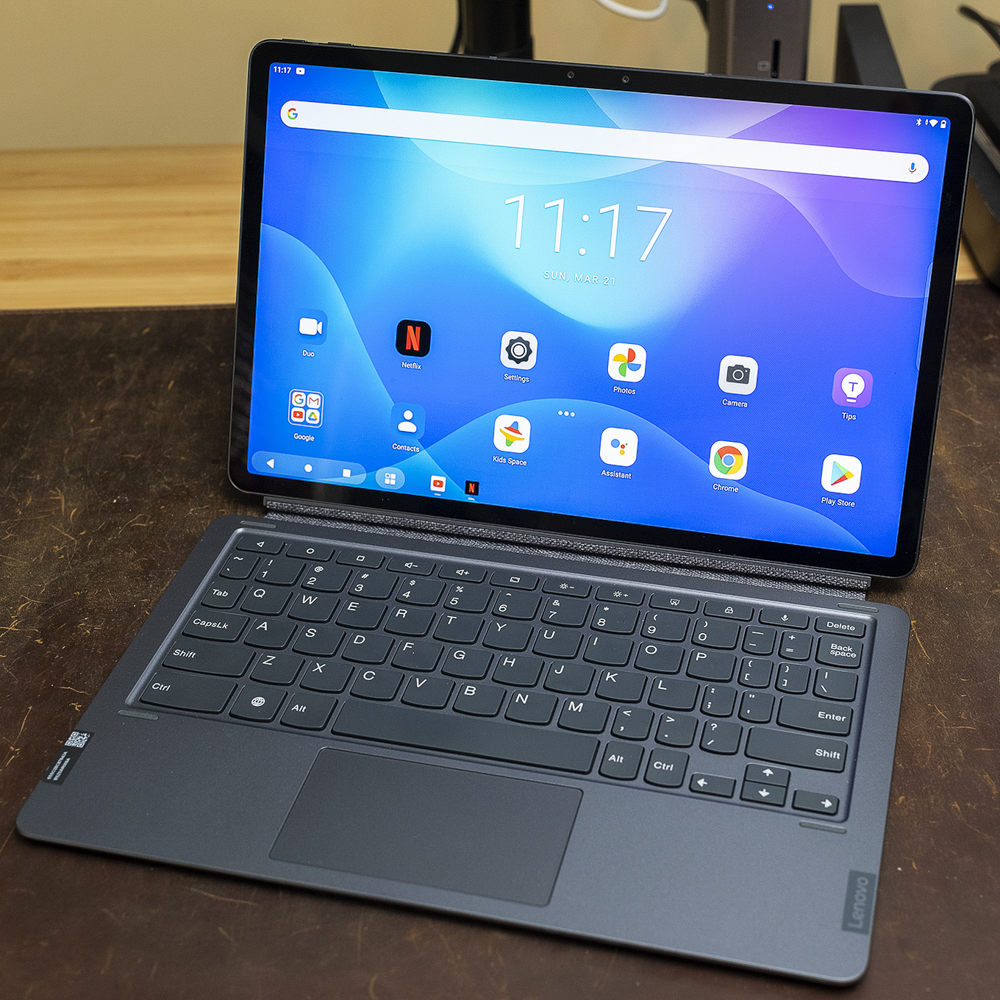 Considering the similarly sized iPad Air starts at $599 before you add a pen or keyboard to it, the Lenovo has a lot of value on its side. No matter which model you opt for, you get the same 11-inch 2560 x 1600 OLED screen; Qualcomm Snapdragon 730G processor; quad JBL speakers with Dolby Atmos tuning; 128GB of storage with the ability to expand it with a microSD card; and premium aluminum unibody design.

The screen and speakers are really the stars of the show here. The OLED panel is not as bright as you can get on an iPad, so it isn’t as good in direct sunlight. But in almost every other scenario, including outdoors in the shade, it looks fantastic. Colors are rich, blacks are deep and inky, and the resolution is sharp. It provides a great experience for watching movies or any video, really.

Similarly, the quad speakers are loud, punchy, and immersive. The Tab P11 Pro’s speakers outclass the iPad Air’s dual speakers and easily hang with the excellent sound system on Apple’s higher-end iPad Pro. Unfortunately, Lenovo is taking the same route as Apple and omitting a headphone jack, so you have the option of using a USB-C dongle (not included) or wireless headphones for personal audio.

Combined, the OLED screen and quad speakers provide the best movie-watching experience on a tablet anywhere near this price. To get something better, you’re going to have to pay a lot more money.

But Lenovo isn’t pitching this as just a couch potato tablet — it’s following Apple and Samsung’s lead in presenting the P11 Pro as a tablet that you can also get work done on. And that’s where the P11 Pro falls on its face.

Starting with the keyboard and pen accessories that are included with the top-end bundle, there’s as much to dislike as there is to like. The snap-on keyboard has a nice fabric cover and comes in two pieces: a back cover with a built-in kickstand that attaches via magnets and the keyboard itself that communicates with the tablet through pogo pins on the bottom edge of the P11 Pro. It’s a similar design to what Samsung uses on the Tab S7 line, and I like the flexibility it affords. I can use just the back cover to prop the tablet up for movie watching without having to have the keyboard in the way all the time. It’s great to have this flexibility when you’re using the tablet on a cramped airplane tray table.

Unfortunately, the typing experience on the keyboard itself leaves a bit to be desired. The layout is as cramped as expected with an 11-inch tablet, and there’s no backlighting available. The trackpad is small and has palm rejection issues — even just using the keyboard to write this relatively short draft was an exercise in patience, as my cursor would randomly jump around any time my left hand brushed against the trackpad as I typed. There’s also very little software support; I can’t adjust the scrolling direction on the trackpad as I can do with a laptop or other tablets.

The bundled stylus is nice to have, but it, too, falls behind the competition. It has many levels of pressure sensitivity, and it writes smoothly enough for my basic note-taking needs. But it doesn’t charge on the back or side of the tablet like Apple or Samsung’s pens (you instead need to plug it in via a USB-C port on its end), and there’s nowhere to safely store it on the tablet. Lenovo includes a rubbery holster for the pen that you’re supposed to stick to the back of the P11’s case with adhesive. But the adhesive is weak, and the pen holder falls off very easily. It all just feels like an afterthought.

Similarly, the software support for the pen is weak. Lenovo includes the Squid notes app (the basic free version, not the full version) for jotting down notes, and you can download many other options from the Play Store. But the pen doesn’t integrate into the system like it does on Apple or Samsung tablets. You can’t use the pen to take quick notes from the lock screen or easily capture screenshots and mark them up like you can on the iPad Air or Tab S7.

When you attach the keyboard to the tablet, Lenovo’s custom productivity mode launches. This is designed to provide a desktop-like interface, similar to Samsung’s DeX feature. But it’s a mess: few apps can be launched full-screen with it, and every app opens in a tiny, windowed box that you have to resize each time. I was able to successfully create a split-screen between a Google Doc and another window, such as Slack or the browser. But in general, the productivity mode feels like a tacked-on afterthought, just like the pen, and really isn’t a great experience.

Elsewhere, the software is standard Android (version 10; there’s no update to Android 11 as of the date of this review, though the P11 Pro does have the latest security patch available), which works best when you’re watching a full-screen video or playing a game, and doesn’t have as many tablet-oriented apps as iPadOS. The Snapdragon 730 processor isn’t as powerful as you get in Apple or Samsung’s tablets, but it’s not really a bottleneck here. You’ll be limited by the lack of tablet-optimized apps way before you hit the performance ceiling of the chip.

In all, the Tab P11 Pro is the tablet to get if you are looking for an excellent movie watching experience and don’t want to spend more than $400. You won’t find a better display or speakers for this price. I’d personally skip the pen and keyboard bundle entirely (even though that does mean you give up the handy back cover and its kickstand) and just use this tablet for what it does best: entertainment.

To use the Lenovo Tab P11 Pro, you must agree to the following items: