Nvidia goes back to 4K for more than $1K

Last year’s Nvidia RTX 3080 was the first GPU to make 4K gaming finally feasible. It was a card that delivered impressive performance at 4K, especially for its retail price of $699 — far less than the 2080 Ti cost a generation earlier. That was before the reality of a global chip shortage drove the prices of modern GPUs well above $1,000. Now that the street prices of RTX 3080s have stayed above $2,000 for months, Nvidia is launching its RTX 3080 Ti flagship priced at $1,199.

It’s a card that aims to deliver near identical levels of performance to the $1,499 RTX 3090, but in a smaller package and with just 12GB of VRAM — half what’s found on the RTX 3090. Nvidia is effectively competing with itself here, and now offering three cards at the top end. That’s if you can even manage to buy any of them in the first place.

I’ve spent the past week testing the RTX 3080 Ti at both 4K and 1440p resolutions. 4K gaming might have arrived originally with the RTX 2080 Ti, but the RTX 3080 Ti refines it and offers more headroom in the latest games. Unfortunately, it does so with a $1,199 price tag that I think will be beyond most people’s budgets even before you factor in the inevitable street price markup it will see during the current GPU shortage. 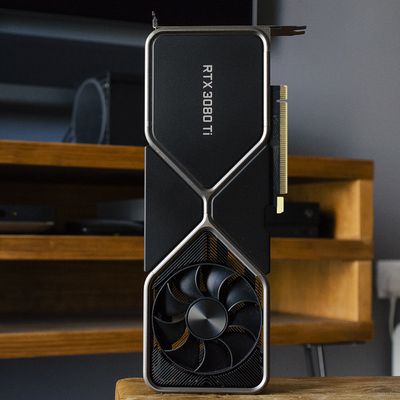 If you put the RTX 3080 Ti and the RTX 3080 side by side, it would be difficult to tell the difference between them. They look identical, with the same ports and fan setup. I’m actually surprised this card isn’t a three-slot like the RTX 3090, or just bigger generally. The RTX 3080 Ti has one fan on either side of the card, with a push-pull system in place. The bottom fan pulls cool air into the card, which then exhausts on the opposite side that’s closest to your CPU cooler and rear case fan. A traditional blower cooler also exhausts the hot air out of the PCIe slot at the back.

This helped create a quieter card on the original RTX 3080, and I’m happy to report it’s the same with the RTX 3080 Ti. The RTX 3080 Ti runs at or close to its max fan RPM under heavy loads, but the hum of the fans isn’t too distracting. I personally own an RTX 3090, and while the fans rarely kick in at full speed, they’re certainly a lot more noticeable than the RTX 3080 Ti’s.

That quiet performance might have a downside, though. During my week of testing with the RTX 3080 Ti, I noticed that the card seems to run rather hot. I recorded temperatures regularly around 80 degrees Celsius, compared to the 70 degrees Celsius temperatures on the larger RTX 3090. The fans also maxed out a lot during demanding 4K games on the RTX 3080 Ti in order to keep the card cool. I don’t have the necessary equipment to fully measure the heat output here, but when I went to swap the RTX 3080 Ti for another card after hours of testing, it was too hot to touch, and stayed hotter for longer than I’d noticed with either the RTX 3080 or RTX 3090. I’m not sure if this will result in problems in the long term, as we saw with the initial batch of 2080 Ti units having memory overheating issues, but most people will put this in a case and never touch it again. Still, I’m surprised at how long it stayed hot enough for me to not want to touch it.

As this is a Founders Edition card, Nvidia is using its latest 12-pin single power connector. There’s an ugly and awkward adapter in the box that lets you connect two eight-pin PCIe power connectors to it, but I’d highly recommend getting a single new cable from your PSU supplier to connect directly to this card. It’s less cabling, and a more elegant solution if you have a case window or you’re addicted to tidy cable management (hello, that’s me).

I love the look of the RTX 3080 Ti and the pennant-shaped board that Nvidia uses here. Just like the RTX 3080, there are no visible screws, and the regulatory notices are all on the output part of the card so there are no ugly stickers or FCC logos. It’s a really clean card, and I’m sorry to bring this up, but Nvidia has even fixed the way the number 8 is displayed. It was a minor mistake on the RTX 3080, but I’m glad the 8 has the correct proportions on the RTX 3080 Ti.

At the back of the card there’s a single HDMI 2.1 port and three DisplayPort 1.4a ports. Just like the RTX 3080, there are also LEDs that glow around the top part of the fan, and the GeForce RTX branding lights up, too. You can even customize the colors of the glowing part around the fan if you’re really into RGB lighting.

Just like the RTX 3080, this new RTX 3080 Ti needs a 750W power supply. The RTX 3080 Ti even draws more power, too, at up to 350 watts under load compared to 320 watts on the RTX 3080. That’s the same amount of power draw as the larger RTX 3090, which is understandable given the performance improvements, but it’s worth being aware of how this might impact your energy bills (and the cost of your PC build to run it).

I’ve been testing the RTX 3080 Ti with Intel’s latest Core i9 processor. For 1440p tests, I’ve also paired the GPU with a 32-inch Samsung Odyssey G7 monitor. This monitor supports refresh rates up to 240Hz, as well as Nvidia’s G-Sync technology.

I compared the RTX 3080 Ti against both the RTX 3080 and RTX 3090 to really understand where it fits into Nvidia’s new lineup. I tested a variety of AAA titles, including Fortnite, Control, Death Stranding, Metro Exodus, Call of Duty: Warzone, Microsoft Flight Simulator, and many more. You can also find the same games tested at 4K resolution below.

All games were tested at max or ultra settings on the RTX 3080 Ti, and most exceeded an average of 100fps at 1440p. On paper, the RTX 3080 Ti is very close to an RTX 3090, and my testing showed that plays out in most games at 1440p. Games like Microsoft Flight Simulator, Assassin’s Creed: Valhalla, and Watch Dogs: Legion all have near-identical performance across the RTX 3080 Ti and RTX 3090 at 1440p.

Even Call of Duty: Warzone is the same without Nvidia’s Deep Learning Super Sampling (DLSS) technology enabled, and it’s only really games like Control and Death Stranding where there’s a noteworthy, but small, gap in performance.

However, the jump in performance from the RTX 3080 to the RTX 3080 Ti is noticeable across nearly every game, with the exception of Death Stranding and Fortnite, which both perform really well on the base RTX 3080.

Assassin’s Creed: Valhalla performs 15 percent better on the RTX 3080 Ti over the regular RTX 3080, and Metro Exodus also shows a 14 percent improvement. The range of performance increases ranges from around 4 percent all the way up to 15 percent, so the performance gap is very game dependent.

Even when using games with ray tracing, the RTX 3080 Ti still managed high frame rates when paired with DLSS. DLSS uses neural networks and AI supercomputers to analyze games and sharpen or clean up images at lower resolutions. In simple terms, it allows a game to render at a lower resolution and use Nvidia’s image reconstruction technique to upscale the image and make it look as good as native 4K.

Whenever I see the DLSS option in games, I immediately turn it on now to get as much performance as possible. It’s still very much required for ray tracing games, particularly as titles like Watch Dogs: Legion only manage to hit 55fps with ultra ray tracing enabled. If you enable DLSS, this jumps to 72fps and it’s difficult to notice a hit in image quality.

For my 4K testing, I paired the RTX 3080 Ti with Acer’s 27-inch Nitro XV273K, a 4K monitor that offers up to 144Hz refresh rates and supports G-Sync. I wasn’t able to get any of the games I tested on both the RTX 3080 Ti and RTX 3090 to hit the frame rates necessary to really take advantage of this 144Hz panel, but some came close thanks to DLSS.

The RTX 3080 Ti comes close to matching the RTX 3090 performance at 4K in games like Watch Dogs: Legion, Assassin’s Creed: Valhalla, Gears 5, and Death Stranding. Neither the RTX 3080 Ti nor RTX 3090 is strong enough to handle Watch Dogs: Legion with ray tracing, though. Both cards manage around 30fps on average, and even DLSS only bumps this up to below 50fps averages.

Most games manage to comfortably rise above 60fps in 4K at ultra settings, with Microsoft Flight Simulator and Metro Exodus as the only exceptions. Not even the RTX 3090 could reliably push beyond 144fps at 4K without assistance from DLSS or a drop in visual settings. I think we’re going to be waiting on whatever Nvidia does next to really push 4K at these types of frame rates.

When you start to add ray tracing and ultra 4K settings, it’s clear that both the RTX 3080 Ti and RTX 3090 need to have DLSS enabled to play at reasonable frame rates across the most demanding ray-traced titles. Without DLSS, Watch Dogs: Legion manages an average of 29fps (at max settings), with dips below that making the game unplayable.

DLSS really is the key here across both 1440p and 4K. It was merely a promise when the 2080 Ti debuted nearly three years ago, but Nvidia has now managed to get DLSS into more than 50 popular games. Red Dead Redemption 2 and Rainbow Six Siege are getting DLSS support soon, too.

DLSS also sets Nvidia apart from AMD’s cards. While AMD’s RX 6800 XT is fairly competitive at basic rasterization at 1440p, it falls behind the RTX 3080 in the most demanding games at 4K — particularly when ray tracing is enabled. Even the $1,000 Radeon RX 6900 XT doesn’t fare much better at 4K. AMD’s answer to DLSS is coming later this month, but until it arrives we still don’t know exactly how it will compensate for ray tracing performance on AMD’s GPUs. AMD has also struggled to supply retailers with stock of its cards.

Nvidia is also competing with the reality of the market right now, as demand has been outpacing supply for more than six months. Nvidia has introduced a hash rate limiter for Ethereum cryptocurrency mining on new versions of the RTX 3080, RTX 3070, and now this RTX 3080 Ti. It could help deter some scalpers, but we’ll need months of data on street prices to really understand if it’s driven pricing down to normal levels.

Demand for 30-series cards has skyrocketed as many rush to replace their aging GTX 1080 and GTX 1080 Ti cards. Coupled with Nvidia’s NVENC and professional tooling support, it’s also made the RTX 30-series a great option for creators looking to stream games, edit videos, or build games.

In a normal market, I would only recommend the RTX 3080 Ti if you’re really willing to spend an extra $500 to get some extra gains in 1440p and 4K performance. But it’s a big price premium when the RTX 3090 exists at this niche end of the market and offers more performance and double the VRAM if you’re really willing to pay this much for a graphics card.

Either way, the best GPU is the one you can buy right now, and let’s hope that Nvidia and AMD manage to make that a reality soon.

The game makers who found careers as asset store creators