I cannot overstate the strength of the reactions the Azio Izo keyboard got when people saw it sitting on my desk. Not many mechanical keyboards out there have big volume wheels attached to their frame, and fewer still style them in a gaudy reflective gold to pair them with a gold spacebar and escape key. Get beyond the gold, and you’ll spot that the rest of its keycaps have a kind of rounded shape that almost makes them look like little pieces of candy.

Azio is no stranger to bold keyboard designs like these. Before now, its most notable keyboards have been from its Retro Classic line. These literally attempt to emulate the look of old-fashioned typewriters with flat circular keycaps and metal frames. The result, as one of my colleagues pointed out, is a keyboard that looks like it could sink a U-boat and only supports coding in COBOL.

I’m all for a piece of consumer tech that’s willing to embrace an eye-catching design like this, but when you’re spending $129.99 on a keyboard, it has to do more than just generate big reactions from everyone that sees it. After spending a week using the Izo as my main work keyboard, my impression is its functionality doesn’t match up to its design. It’s launching on Kickstarter today alongside a matching mouse and calculator, and the plan is to deliver to backers in August. The keyboard’s MSRP is $129.99, but Azio is also offering early bird discounts with its Kickstarter campaign that bring the price down to $79.99 and $69.99. For this review, I evaluated it at its full retail price. 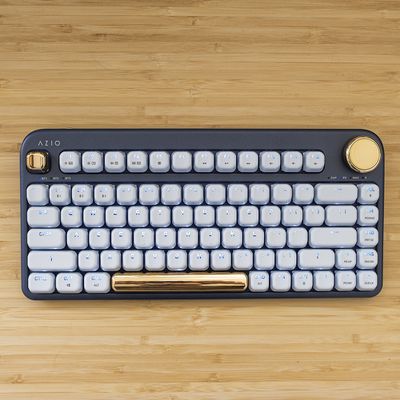 From the photos at the top of this article and throughout the page, you likely already know whether you like the look of the Izo. As well as blue, the keyboard is also available in pink and white. But whichever look you choose, you get rounded white keycaps and a blingy gold escape key, space bar, and volume wheel.

I’m a big fan of volume wheels like this, and the Izo’s is no exception. It’s got a nice tactile feel, and it worked flawlessly regardless of whether I was using the keyboard in its wired or wireless modes. Pressing the dial down also works to mute and unmute your computer, while holding down the Fn key as you turn it will adjust the backlighting brightness. The volume wheel’s functionality cannot be remapped, however.

The only problem with a volume wheel like this is that it takes up space, and space is a rare commodity on compact 75 percent-style boards like this, which omit the numpad of larger keyboards but still include a function row. The more compact selection of keys means you have to be smarter about which you include, and Azio has made a couple of bizarre decisions when it comes to the Izo.

The most egregious of these is that there’s no dedicated print screen key. Instead you get, of all things, an Insert key, which is a key that in my nearly 30 years on this planet I have only ever pressed accidentally. Its print screen button, meanwhile, is hidden behind a function key. For me, this one small omission ruled out using the Izo keyboard for important work events where I have to take frequent screenshots. With no built-in support for key remapping, it’s not something that can be easily fixed.

The keycaps themselves are a bit of an acquired taste. Construction-wise they’re fine: a double-shot combination of hard-wearing PBT plastic and transparent lettering to let the keyboard’s white LEDs shine through (there’s no RGB support here). But their rounded design takes a little bit of getting used to. I found my fingers slipping off the rounded edges of the keycaps a little as I typed, as I missed the sharper raised edges you get on more traditional keycaps. I didn’t have any issues installing third-party keycaps, but good luck finding some that match the unique look of this keyboard. There’s no angle adjustment on the Izo.

While most keyboards are designed with Windows in mind and Mac as an afterthought, the Izo is first and foremost a Mac keyboard. Its bottom row features Option and Command keys, and while it does have Windows and Alt legends printed alongside them, they’re smaller and don’t let the backlighting shine through. It would have been nice to see Azio include replacement dedicated Windows keycaps like Keychron does. You can switch between Mac and PC layouts by hitting Fn + Home. Azio is only producing this keyboard with a US (aka ANSI) layout for now, but it says it hopes to release additional layouts in the coming months.

The Izo works as both a wired and wireless keyboard, via USB-C and Bluetooth respectively, and a gold switch around the top of the board toggles between them. If you’re using it in wireless mode, there’s the option to pair it with up to three devices (much like Keychron’s keyboards), and switch between them with a key shortcut. The initial pairing process is a bit fiddly and involves you selecting one of the three profiles first before putting the keyboard into pairing mode. Keychron’s process is more seamless.

Azio claims the keyboard’s 5,000mAh battery should go for a full year on a single charge if you’re using it with its backlight turned off, dropping to two weeks of eight hours of daily use with it turned on (which, trust me, you will). It’s hard to directly compare, but Azio’s two-week battery life claim translates to around 112 hours of use, which is a little higher than the 68 and 72 hours the Keychron K2 claims with its lights on, understandable given the bigger battery in Azio’s board. I wasn’t able to run the Izo keyboard’s battery down to zero during my review period, but after two days of wireless use, the built-in battery indicator reported I had 60 percent of charge left.

Here’s what typing sounds like on the Azio Izo:

Quibbles aside, the feeling of actually typing on the Azio Izo is fine so long as you like your switches clicky. The keyboard is only available with Gateron Blue switches, which means fans of tactile or linear switches are going to be out of luck. That’s great for fans of clicky switches like me, but if you aren’t, or if you can’t afford for your keyboard to be a little cacophonous, then Azio isn’t interested in taking your money. The Izo isn’t hot-swappable either, which means changing its switches will only be possible with a soldering iron.

I’ll just come out and say it: I think Azio’s Izo keyboard looks great. It’s got the kind of loud, eye-catching design that I wish more consumer tech would embrace. It won’t be for everyone, but if you’re into it, you’re into it.

But you’re going to have to put up with a little hassle if you want to enjoy this keyboard’s looks. The key selection is odd, it’s available with a limited range of switches, and the keycaps are an acquired taste. The Izo might look the part, but it struggles to act it.

A note on crowdfunding:

Crowdfunding is a chaotic field by nature: companies looking for funding tend to make big promises. According to a study run by Kickstarter in 2015, roughly 1 in 10 “successful” products that reach their funding goals fail to actually deliver rewards. Of the ones that do deliver, delays, missed deadlines, or overpromised ideas mean that there’s often disappointment in store for those products that do get done.

The best defense is to use your best judgment. Ask yourself: does the product look legitimate? Is the company making outlandish claims? Is there a working prototype? Does the company mention existing plans to manufacture and ship finished products? Has it completed a Kickstarter before? And remember: you’re not necessarily buying a product when you back it on a crowdfunding site.