In the great pantheon of gadgets we attach to our wrists, two categories have jumped to the front: smartwatches and sports watches. Smartwatches are sleek and more for the day-to-day, but they typically suffer horrible battery life. Sports watches are tougher, longer-lasting, and, well, sportier, but they tend to be big, bulky, and ugly. The Garmin Venu 2 is an attempt to close the gap between the two product categories — and while it isn’t perfect, it’s the closest anyone has come yet.

Our review of Garmin Venu 2 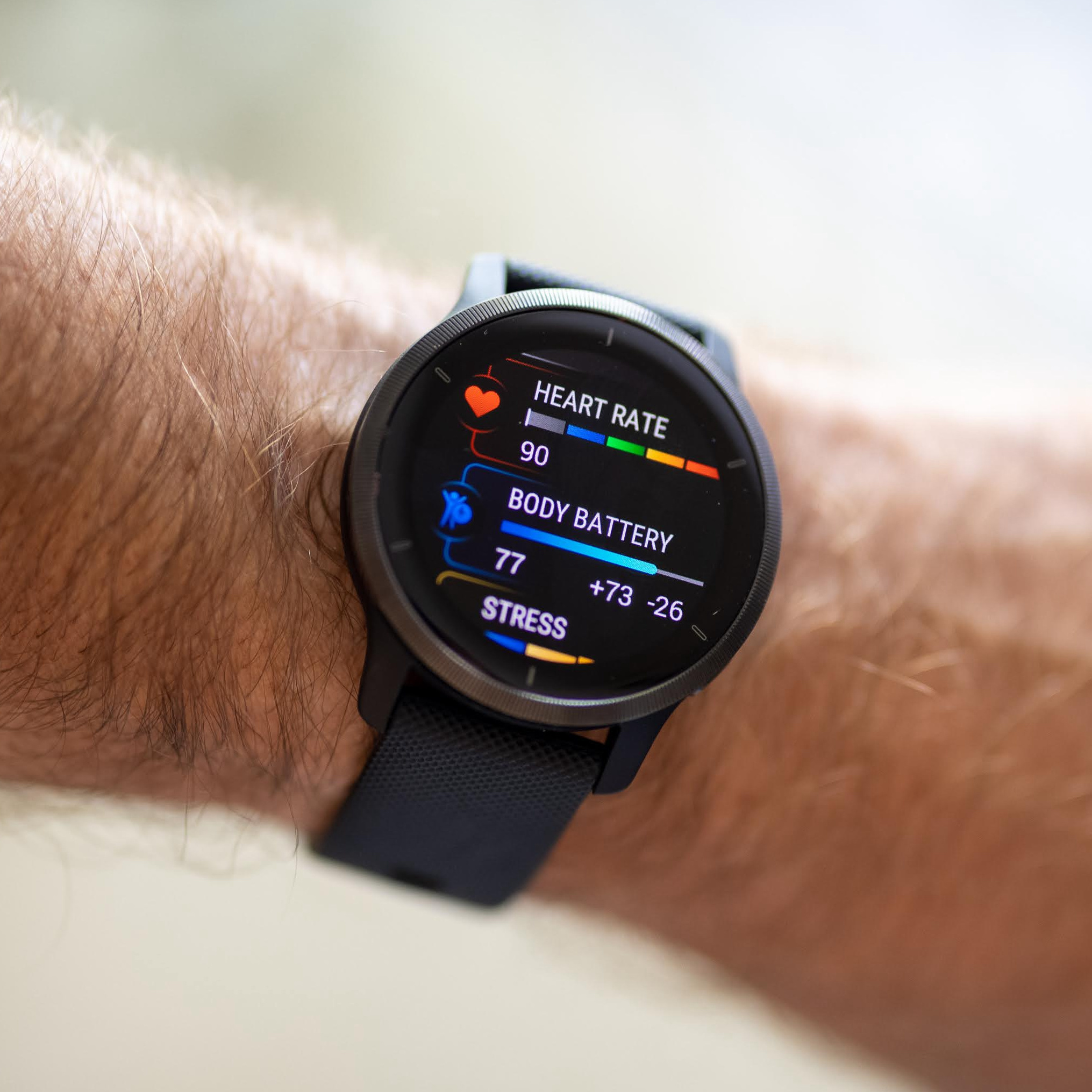 Let’s start with the body. There are two sizes to choose from. The standard Venu 2 comes in at 45mm (1.77 inches), and the Venu 2S is 40mm (1.58 inches). Both watches cost the same $400 and are effectively identical, but the 2S has a slightly smaller screen (1.1 inches versus 1.3 inches) and a nominally shorter battery life. I thought the regular Venu 2 looked good on me, but smaller-wristed people should go for the S. Right up front, the watches have a bright and colorful OLED touchscreen. It’s sharp and clear, and I was able to clearly read it even in bright, direct sunlight while running.

There are only two physical buttons, both on the right side of the watch. The top button is the activity start / stop button, and long-pressing will get you right to you a circle of shortcuts for settings and apps. The bottom button is the back button, but it also doubles as a manual lap / set trigger, and long-pressing will get you into your settings.

The rest of the UI is navigated by touch, and it actually doesn’t suck! That may sound like a low bar to clear, but the vast majority of smartwatch user interfaces are objectively awful. In contrast, Garmin’s is simple and intuitive. It borrows heavily from its sports watches like the Fenix 6 and the Enduro — including its excellent widgets that provide just enough info — you just navigate it with a touchscreen now.

The watch itself is understated and attractive. It’s low-profile enough that it doesn’t catch on sleeves, and you could even get away with wearing it for formal occasions. Changing straps is quick and easy; there are plenty of classy leather type options in addition to the typical workout-focused straps.

Fortunately, it’s outdoorsier than it looks. In addition to being waterproof to 5 atmospheres (about 164 feet), it has basically every sensor you could want, including: GPS and GLONASS for satellite positioning, a barometric altimeter for elevation, a compass for positioning, a gyroscope and accelerometer for motion tracking, a thermometer, ambient light sensor, a heart rate monitor, and pulse oximeter. All of those work very well. The heart rate monitor and pulse oximeter represent the first use of Garmin’s new Elevate V4 sensor suite, which has upgraded infrared sensors (as well as more sensors) for better accuracy. It tracked my runs and hikes accurately, and the heart rate monitor was almost as accurate as the chest strap I wore (the Wahoo Tickr, which also has been excellent in my testing).

On the smartwatch side, the Venu 2 checks most of the boxes, though there’s nothing particularly revolutionary about it. It displays notifications from your smartphone, be it Android or iOS. If you’re using Android (I was testing with my trusty Google Pixel 5), you can quick-reply to text messages and other notifications (you can program your own quick-replies via the app), which is handy when a Yes / No / ”Call you back in a bit” will do. This works fine with texts, but when I tried this with Gmail messages, the replies never actually went through, despite it saying it had been sent on the watch screen. For what it’s worth, Apple would prefer you buy the Apple Watch, so it does not allow you to reply to text messages via any third-party watch, which is annoying.

The Venu 2 has an NFC radio and Garmin Pay, which allows you to store credit card info on the watch and tap to pay when you’re without your phone / wallet. It can also store music (there’s enough storage for up to 650 songs) and pair directly with Bluetooth earbuds. Getting the watch set up with Spotify was a bit of a pain, but once that was done, I was able to quickly download a whole playlist and head out sans phone.

While most smartwatches top out around a day of battery life (maybe two if you’re conservative), the Venu 2 boasts 11 days of battery life in smartwatch mode (10 days for the Venu 2S), which is excellent. Obviously, using the GPS for activity tracking will take a good bite out of that, and I always did a mix of both, but even with logging all of my GPS workouts, the battery never lasted less than eight days between charges. That ends up being a big deal for your 24 / 7 health tracking metrics. The Venu 2 has very detailed sleep tracking, as well as heart rate, respiration rate, and more, and it’s really nice to get a week-plus of uninterrupted measurements without having to worry about taking it off to charge.

It’s worth noting that there are some smartwatch features the Venu 2 does not have, which would be stock on something like Apple Watches or Google’s Wear OS. It doesn’t have any kind of voice assistant built in. In fact, it doesn’t even have a mic or a speaker, so there are no voice calls or voice commands. There are a lot of customizable watchfaces to choose from, and it can display your upcoming calendar events, but you can’t add or edit events from the watch. Basically, it’s smart-ish, but there are sacrifices.

On the sports watch side, there are about 30 activities you can choose from, including running, walking, hiking, pool swim, strength training, snowboarding, skiing, and others, but it doesn’t come anywhere close to the offerings from most dedicated sports watches, including the Garmin Enduro or Fenix 6. For example, there is no option for trail running, open water swimming, or surfing (which are some of my most common workouts), and there isn’t really a good reason why. The Venu 2 has all the necessary sensors, and it has plenty of storage for those tiny apps.

The Venu 2 also lacks not only maps but even a simple track-back feature for runs and hikes to help you find your way back to your starting point, something I sorely missed when I got lost on a run and ended up straining my knee while finding my way back. It does have a “Back to Start” feature, but that just tells you your distance back to your starting place and has an arrow to point you in the (allegedly) right direction. In practice, it’s essentially useless. Because it doesn’t display the path you took, the arrow would frequently lead me down dead-end streets. Often, it pointed in the exact opposite direction of where I started, even though the distance was consistent. This leads you to play colder / hotter as you’re trying to find your way back. It’s just bad.

These are some big omissions in my book, and it seems like Garmin only made these choices because it doesn’t want to cannibalize its sales of its higher-end sports watches, which is extremely disappointing. This watch could attract far more people if it just included more apps. For me, the lack of my favorite workouts would be a deal-breaker, but that begs the question: who is this watch really intended for? It includes things like treadmill, indoor rowing, yoga, Pilates, stair stepper, and indoor climbing, but not kayaking or mountain biking. The watch also has downloadable HIIT and strength training workouts with a muscle map to show you what you’re going to work, clever animations to guide you, and automatic rep counting, but there is no attempt at outdoor route-finding or navigation.

It seems like this watch is more aimed for city folk rather than those who want to get out in the dirt. Garmin effectively confirmed that to me, saying the Venu 2 was designed for more of an “active lifestyle” versus an adventure / outdoor customer in mind.

If you look at the list of activities and you see that all of your favorites are covered, then this watch is liable to be an excellent workout companion for you. The smart features are nice, the battery life is fantastic, and the activity tracking is highly accurate.

But if you, like me, prefer to get your exercise out in nature, then it’s worth shelling out the extra money for a Fenix 6. It’s a real shame because this watch could have been great for both, and it would be a better fit for far more people if it just had more activity options. We’ll update this review if Garmin has a change of heart and fixes that with a software update, but I wouldn’t hold your meticulously tracked breath.

To use the Garmin Venu 2 or 2S, you must agree to the company’s terms of use and the end user licensing agreement for the Connect App. If you want to use the watch’s built-in Garmin Pay system, you have to also agree to the terms and conditions for that.