Amazon’s smallest smart display has gotten the tiniest of refreshes

Amazon recently updated a couple of its Alexa-based Echo Show smart displays. The new Echo Show 8 (second gen) saw a couple of enhancements over its predecessor, but the smaller Echo Show 5 has received an even smaller refresh.

There are only three basic changes in the new $84.99 Echo Show 5 (2nd Gen): it has a 2-megapixel camera instead of the 1-megapixel sensor of the first model; it comes in blue as well as the black and white color options; and the 3.5mm output jack on the back is gone. Unlike the larger Echo Show 8, the new 5 didn’t get a new processor, and its camera doesn’t feature the automatic panning and cropping that the Echo Show 8 and 10 offer. 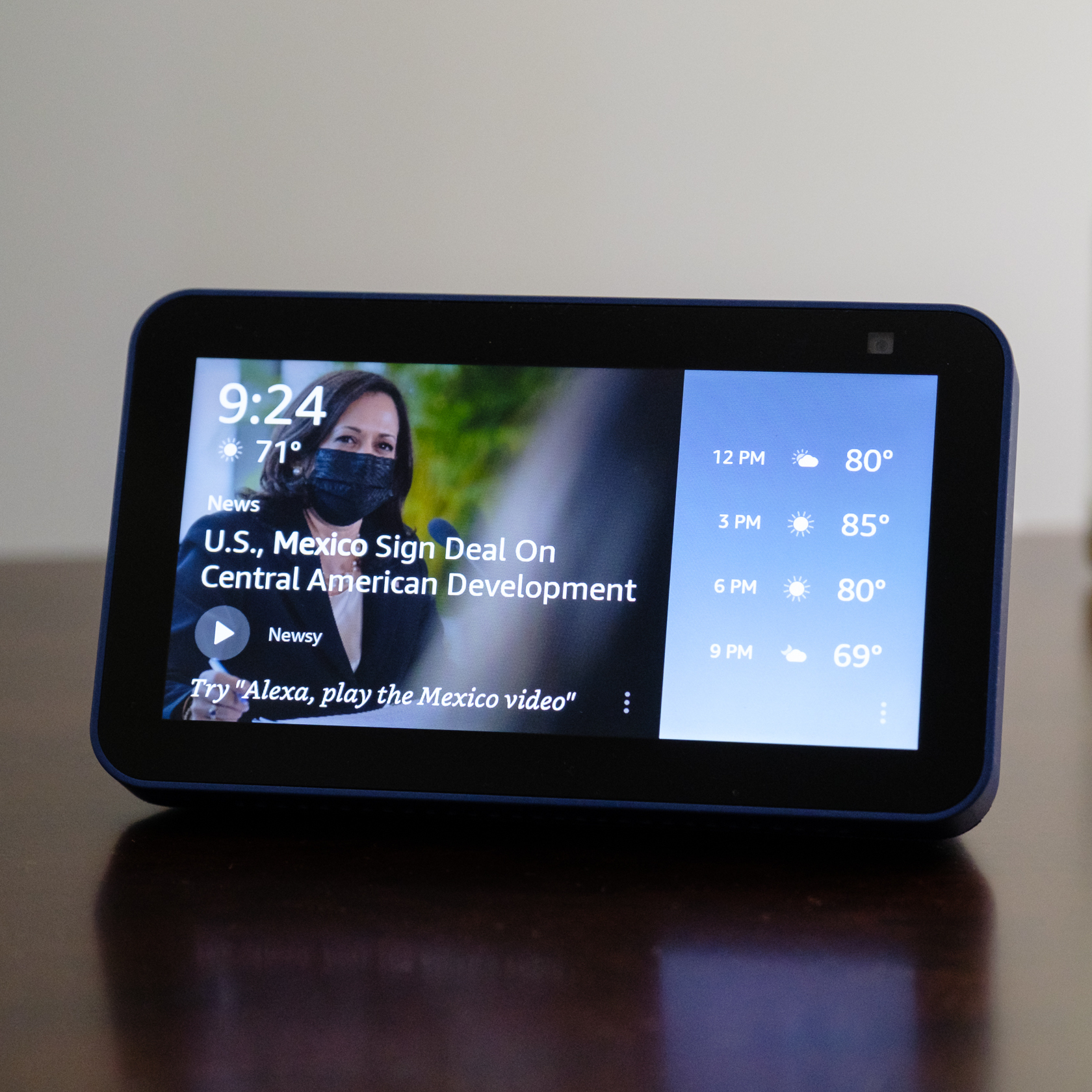 That means that this new model provides effectively the same experience as the prior generation. It’s a compact smart display that’s best used as a smart alarm clock or a desk companion in a home office. The 5.5-inch 960 x 480-pixel touchscreen is bright and colorful, but not as easy to read from across the room as Amazon’s larger smart displays. It works as a monitor for a security camera or video doorbell, but I wouldn’t want to watch much video on it — your phone is a better device for that. If you insist, the Echo Show 5 supports Amazon Prime Video, Netflix, and YouTube via its browser, but not as many video services as the larger models.

The single speaker inside the wedge design gets surprisingly loud and puts out more bass than expected for its size, but it won’t as easily fill a room with sound. It works great for a morning alarm or listening to a podcast at a desk. The Echo Show 5 also has a handy feature that lets you tap the top of the device to snooze an alarm, which is easier than trying to say “Alexa snooze” when you’re half awake. (The Google Nest Hub’s ability to just stop the alarm with a single word, or to snooze when you wave your hand in front of it, is still better, though.)

Though the camera in the new model is 2 megapixels instead of 1, that’s not a huge upgrade. The Echo Show 5 doesn’t support Zoom, so you can’t use it for work calls, but it’s fine for calling from one Alexa smart display to another or to the Alexa app on a phone. Perhaps a more useful feature is the ability to view the camera’s feed through the Alexa app, so you can see what’s going on at home when you’re gone. If you don’t want to use the camera at all, you can block its view with the built-in privacy shutter.

Since the second-gen Echo Show 5 has the same processor as the last model, it’s not any faster. Of Amazon’s smart display lineup, it’s certainly the pokiest, taking the most time to load a video feed from a security camera and taking an extra beat or two to pull up different screens or menus when you interact with it. Most people will probably not find that to be a problem, but if you were hoping for a speed increase this time around, sadly there isn’t one.

Along with the standard Echo Show 5, Amazon is also now selling a Kids Edition model for $10 more. That gets you a custom blue-green-yellow chameleon color, a year’s subscription to the Kids Plus service, and a two-year warranty against accidental breakage. (A two-year damage warranty for a device that is supposed to stay put on a shelf or dresser doesn’t seem very valuable to me, but I’m sure some kid out there will find a way to break the thing.)

The Kids Plus service on the Echo Show is similar to what’s available on Amazon’s Fire HD Kids Edition tablets. It allows parents to customize which content and features are available on the devices and tailor them to their child’s age. It will play music from Amazon Music and won’t allow explicit tracks. It also removes certain features like smart home controls from the Show’s touch interface.

On the tablets, it’s possible to have multiple profiles that can be switched between different kids, but the Echo Show doesn’t support that. If you’re planning to have more than one kid share it, you have to set the limitations to the age range of just one.

In all, the new Echo Show 5 (and its Kids Edition derivative) is basically the same as the prior model. It’s still a handy, compact smart display for a nightstand or desk, but it’s not as capable or fast as the larger Echo models in Amazon’s lineup. Given the limitations with the camera, I would be more interested in a model without a camera at all, similar to Google’s Nest Hub, as the bedroom alarm clock is the ideal use case here.

At $84.99, the new model is $5 less expensive than its predecessor at launch, but Amazon frequently discounts its Echo devices and you’ll likely be able to find it for less than its retail price quite often.

In order to use the Amazon Echo Show 5, you’ll need to have an Amazon account. By signing up for one of those, you must agree to its conditions of use.

When setting up the device, you agree to a whole host of mandatory terms. In Amazon’s own words: “By proceeding, you agree to Amazon’s conditions of use and all of the terms found here.”

In addition, the Echo Show 5 has three optional things to agree to: remote livestreaming via the Alexa app, Amazon’s Sidewalk network, and locating items through the Sidewalk network.