Is it an e-bike or an e-moped? Who cares, it’s fast

The Juiced HyperScrambler 2 is a lot of bike for a surprisingly affordable price. The classic mini-bike-meets-moped design is very popular among e-bike companies right now, with dozens of smaller brands trying to cash in on the trend. But Juiced is one of the first to do it, and do it well.

With the HyperScrambler 2, the SoCal company went all in on speed and power. The dual-battery setup ensures hours of riding without fear of getting stranded miles from home without any juice. (Sorry.) The only question is whether your butt can actually endure so many hours of riding in this particular saddle. (Mine could not.)

When I say this is a lot of bike, I’m not exaggerating. At a whopping 119 pounds, the HyperScrambler 2 is one of the heaviest e-bikes I’ve ever tested. That’s mostly thanks to those twin 52-volt / 19.2 amp-hour batteries strapped to the middle of the frame. That weight can either be a blessing or a curse, depending on what kind of riding style you prefer.

Our review of Juiced HyperScrambler 2 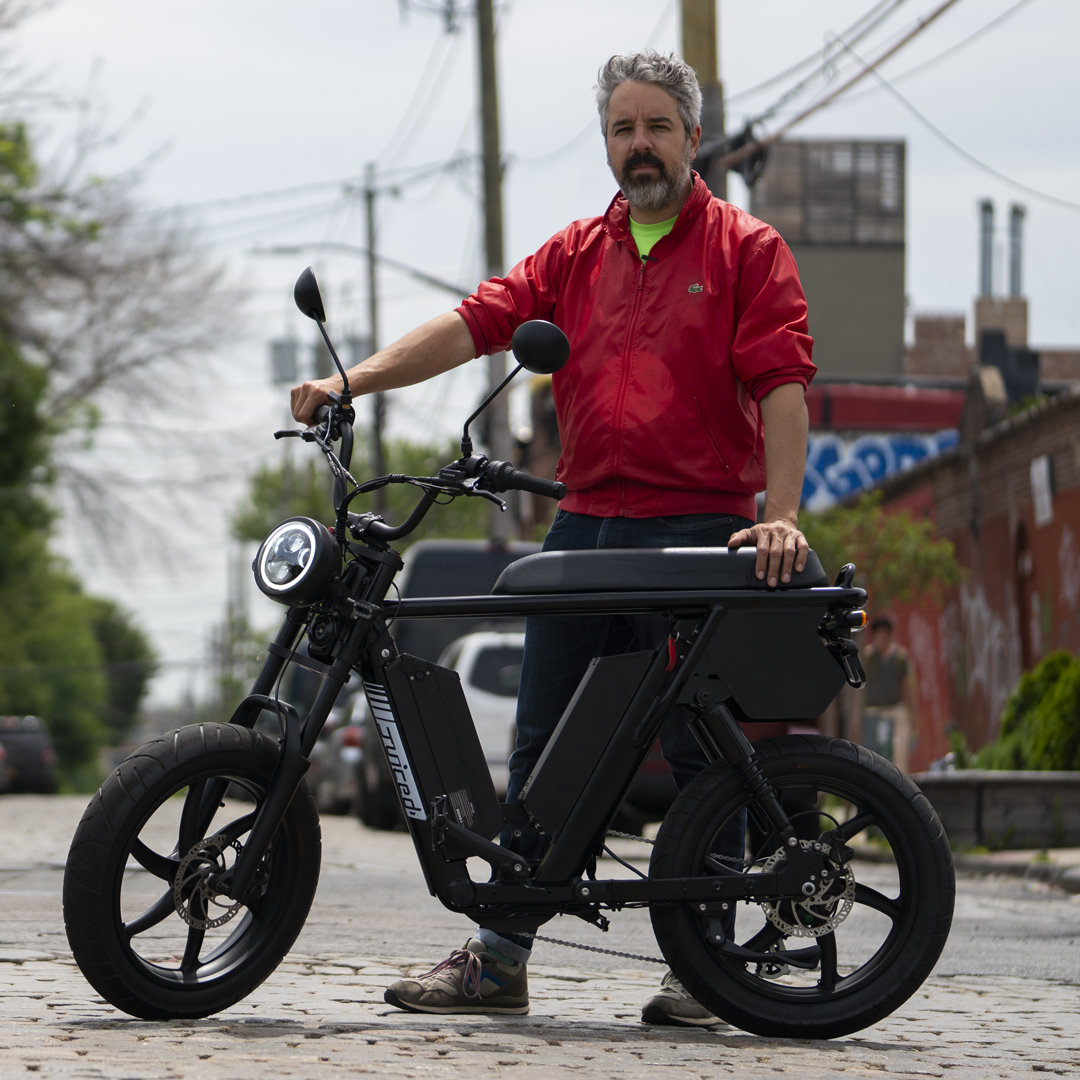 The HyperScrambler’s girth certainly gives it a more commanding stance on the pavement, which can help improve riding confidence. On the other hand, this is not a bike meant for carrying up and down stairs or even throwing in the back of a truck or SUV — at least not without the risk of a herniated disc.

But forget all of that for a moment: I have a lot of e-bikes in my garage right now, but every time I’ve had friends over in recent months, there was only one they wanted to try out for themselves. The Juiced HyperScrambler 2’s ostentatious design and powerful motor practically begs to be ridden — and ridden fast.

Juiced is a Southern California company, as if that wasn’t obvious. Founded in 2009 by Tora Harris, a Princeton graduate and former Olympic high-jumper, the company originally was focused on importing lithium-Ion batteries before pivoting to e-bikes. A year later, Juiced launched its first bike, the low-step ODK utility bike (which kind of looked like a precursor to the RadRunner by Rad Power Bikes).

Juiced now sells 10 models under four distinct categories: the Rip-Current fat tire bikes; the moped-style Scorpions; the Scrambler minibikes; and Cross-Current for urban commuting. The company has earned consistent praise for its ultra-fast, moped-lite bikes. Bicycling magazine named the HyperScorpion one of its best fat tire e-bikes of 2020.

I can confirm the “insane” range on this bike

I can confirm the “insane” range on this bike, but is it the perfect mobility solution? Not exactly. There’s no question that there’s a lot to like about this bike, but there are also some serious trade-offs that need to be considered.

First, let’s talk about the specs:

It may not be the most high-performance e-bike on the market — the Super73 RX proved to have a little more pick-me-up than the HyperScrambler 2 in a side-by-side test — but it provides more than its fair share of white-knuckled, dumb grin-producing experiences.

Juiced offers five different versions of the HyperScrambler 2: three pedal-assist models and two throttle speed models. I tested the highest spec version, the throttle-based Race Track Mode with a top speed of 30-plus mph. With a twist of the throttle, the bike rocketed up to a top speed of 32mph — just fast enough to make my palms sweaty. The noise from the motor was tolerable, though it wasn’t nearly as silent as most of the Bosch-powered bikes I’ve ridden.

With a twist of the throttle, the bike rocketed up to a top speed of 32mph

I did experience some problems with the HyperScrambler’s throttle. Occasionally, the motor would stay engaged even without pedaling or using the throttle, which created some awkward moments. Squeezing the brake would turn it off, but releasing the brake would cause the bike’s motor to turn back on without twisting the throttle. These are the kinds of wiring problems that your local bike shop probably isn’t equipped to repair.

If I was thinking about buying this bike, I might be concerned about longtime service and repair issues. When things break down — and they inevitably will — it’s going to be more of a hassle to get these bikes fixed than your average 10-speed. Juiced has a fairly extensive warranty, but it only applies to new bike purchases. If you buy the HyperScrambler used, you’re out of luck.

The two-foot-long (62-centimeter) padded seat is where the HyperScrambler gets most of its classic mini-bike looks, but I really wish Juiced had gone with something more adjustable and more comfortable. For short rides, the seat proved to be no problem; but for those longer trips, my butt was a little worse for wear.

Juiced claims you can get up to 100 miles of range on a single charge, but that’s only riding in the lowest possible setting. In my experience, very few people will ride a bike this way. But with the dual-battery configuration, the HyperScrambler 2 has 1,989 watt-hours, which is just an incredible amount of battery capacity. Juiced has a balancer module that automatically draws power evenly from the two batteries. And you have the option to simply turn one battery off if you only want to drain one at a time.

The dual batteries really did wonders for my range anxiety. I test a lot of e-bikes, and I’ve been stuck miles from home with a dead battery more times than I can count. It’s not fun. But the HyperScrambler 2 is one of the longest-range bikes I’ve ever ridden. If you’re gunning it all the time at 30mph (and, real talk: you will be; it is so friggin’ fun), you are going to get about 20–25 miles per battery, so about 50 miles total. And riding in a more laid-back style will get you even further.

The components on the HyperScrambler 2 are really, well, very busy. In addition to the 8-gear shifter, there’s a USB plug, turn signals (!), an extremely loud (and annoying) horn, and an LCD display, where you can toggle between power settings. The sideview mirrors and turn signals were a nice touch and certainly improved my riding experience. They were also a good reminder that the HyperScrambler is really pushing the common definition of what many would consider an electric bike.

I think the main question you need to ask yourself before buying this bike is: what kind of riding do you plan on doing? If you’re looking for an e-bike that can replace a car, with some room for cargo or even a kid seat, this is not the bike for you. But if you’re looking for a bike that can go wicked fast, impress your friends with a uniquely classic design, and won’t break the bank (but may break your head — always wear a helmet!), then this should definitely fall under your consideration.

This is a vibes bike, the kind you take out on a warm summer night when the sun is low over the horizon, you have some cash in your pocket, and the good taco truck is just down the street. It’s for boardwalk cruising, gravel grousing, and definitely anywhere there’s a flat stretch of pavement and no cars. Just twist that throttle, and let it rip.