Android TV on the go

Xgimi’s latest all-in-one smart projector not only looks good, but it supports native 4K and HDR content. Better yet, the Xgimi Horizon Pro boots straight into Android TV and features a pair of 8W Harman Kardon speakers that sound great despite the projector’s compact size. Couple that with a bright LED light source, built-in Wi-Fi, and the ability to automatically avoid obstacles when determining where to project the image, and you’ve got a 300-inch display that can go anywhere there’s a power outlet and a flat surface. Hell, it’ll even double as a Bluetooth speaker in a pinch.

I’ve never been a fan of smart televisions when it’s so easy to offload those smarts to a more capable streaming box or stick, which can be neatly hidden out of sight. But it’s much harder to do the same thing with a projector when they’re mounted to ceilings or placed on a coffee table for an impromptu movie or gaming night with friends. With projectors, the more self-contained they are, the better. The Xgimi Horizon Pro measures just 8.2 x 8.6 x 5.4 inches / 6.6 pounds (208.4 x 218.4 x 136.2mm / 2.9kg), making it a fairly portable party box. And Xgimi’s “no advertising” pitch is refreshing at a time when ads are increasingly polluting the television viewing experience.

I’ve been using the $1,699 Xgimi Horizon Pro for a few weeks now, using it to stream media from Disney Plus, YouTube, Apple TV Plus, Amazon Prime Video, Plex, and HBO Max, to name just a few of the Android TV integrations available on the Google Play Store. The notable omission is Netflix, which isn’t officially supported on the Horizon Pro. While I did manage to install the app via a hacky workaround, it’s not something most people would be willing or even capable of doing. And because Netflix is used by over 200 million people around the world, the lack of official support is a big deal that you should be aware of at the outset of a review for a nearly $2,000 projector from a company you might never have heard of.

Our review of Xgimi Horizon Pro 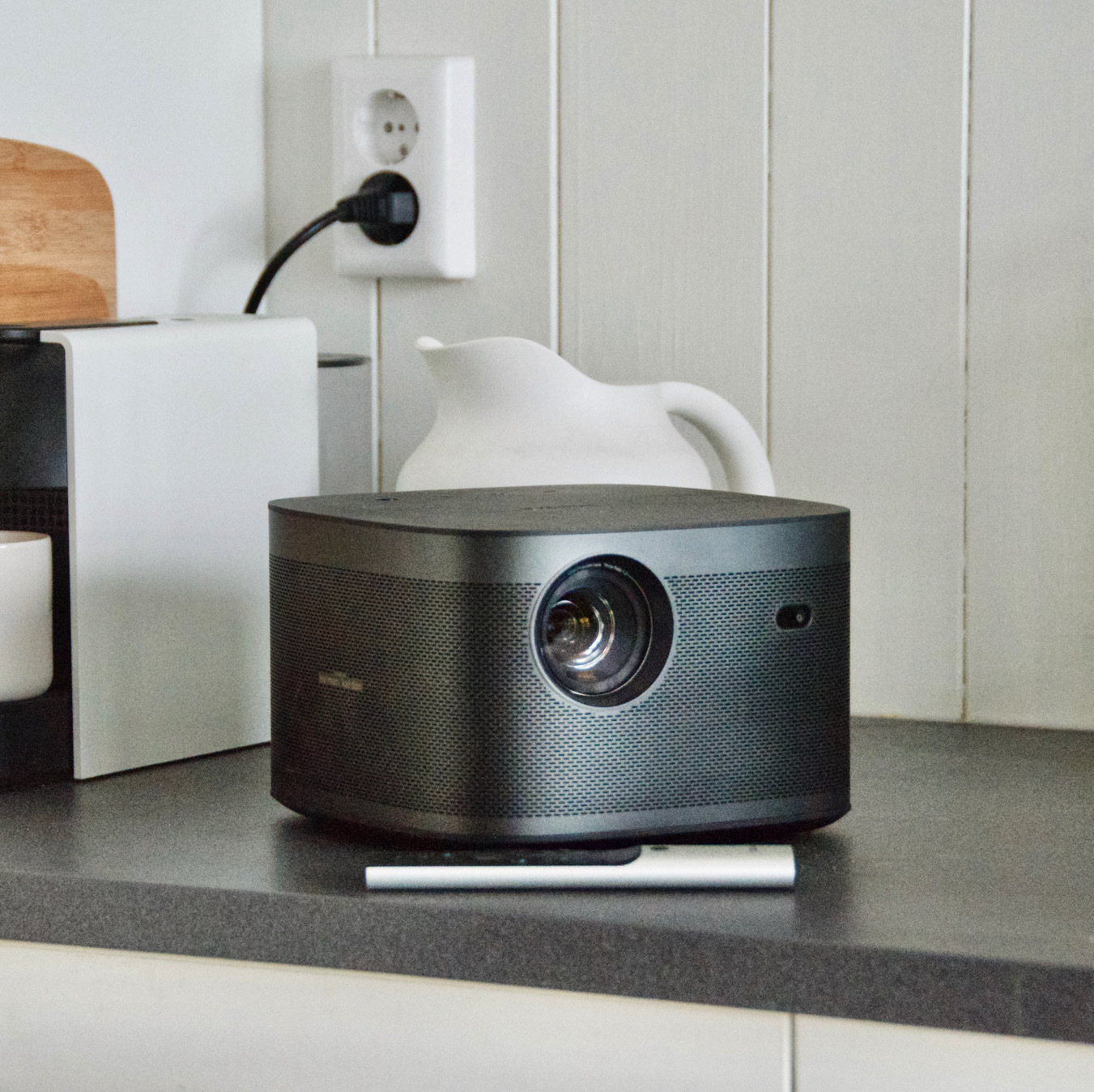 Xgimi got its start in 2014 in China. It officially debuted in Western markets in 2016 as part of an Indiegogo program to promote established Chinese brands. The company has since developed a loyal fan base for its smart projectors that favor a mix of good design, ample specs, and low pricing. If the Z4 Aurora I tested back in 2016 was a work in progress, then Xgimi’s new Horizon Pro flagship is the culmination of those efforts.

To start, the Horizon Pro’s integrated AI makes setup a breeze. Turn it on and point the lens at a wall or projector screen, and Xgimi’s spatial algorithms will detect any obstacles and calculate what it thinks is the ideal picture size, location, and image brightness. The whole detection process takes less than 15 seconds upon first boot. The automatic screen adaption is close to magical at times and simplifies a process that can be laborious on other projectors even when Xgimi gets things wrong.

In my testing, the AI generally found the gap on my living room wall above the TV, but only with the projector mounted to a tripod in order to first aim it upward. I still had to manually tweak the keystone in order to extract the largest display possible. It did much better when the image was cast onto a dedicated projector screen, quickly finding the surface and neatly aligning the projected image between the defined black borders. Fortunately, the Horizon Pro drops you into a manual keystone mode after every automatic attempt in order to position the screen exactly where you want it, even at some fairly extreme angles. The Horizon Pro can level the picture when tilted on its side by as much as 45 degrees, with a keystone correction of ±40 degrees on the horizontal and vertical axis.

Beware that those extreme angles will create elongated light shadows around the keystone-corrected image. It’s an unfortunate side effect of the Horizon Pro’s DLP engine having to project “black pixels” of light onto the wall where the projected image naturally falls. This overflow of light can be distracting when viewing dark scenes in very dark rooms, so it’s best to use as little keystone correction as possible. Using a projector screen with a heavy black border can help minimize the effect.

Xgimi’s brushed aluminum remote control is a joy to use. The tubular remote looks as good as its weighted mass feels in the hand. It includes only a minimal set of controls, but I didn’t miss anything. From the top down, you’ll find a built-in mic and buttons for power, settings, and a dedicated Google Assistant button. Below the D-pad are buttons for back, menu, home, volume down and up, and focus. It can’t control an on-screen pointer like other Xgimi projectors, which might disappoint some. (I didn’t miss it.) It’s also not rechargeable like previous Xgimi remotes, opting for a pair of AAA batteries instead. Conveniently, the settings button slides a useful Shortcut Settings menu over your content to quickly toggle image and sound modes. (More on those later.)

Brightness, measured in ANSI lumens, is one of the most critical measurements of any projector, especially one capable of 4K (3840 x 2160) HDR. Xgimi lists the Horizon Pro at 2200 ANSI lumens, which is bright, especially for a portable DLP projector, but not anything close to what a modern LCD or OLED TV can produce. As such, contrast and HDR content suffer by comparison.

I don’t have blackout blinds, which means the Horizon Pro isn’t watchable until about mid-afternoon (when the sun shifts to the other side of my house). From there, it has to be set to the brightest mode, the blinds have to be closed, and the projection is limited to a size of about 60 inches in order to compress those lumens into a tighter rectangle. Given my choice, I’d rather fire up my 55-inch LG OLED during the day, so long as I don’t have to carry it anywhere.

It’s in darkened rooms where the Horizon Pro really comes alive. Here, those 2200 lumens provide enough contrast to make 4K HDR content pop. It reminds me just how much I’ve missed viewing films on a richly colorful giant screen ever since my local cinema shut down last year. The Horizon Pro does a good job with 1080p and 720p content in my testing. And let’s face it, the majority of legacy content viewed on this 4K projector will require upscaling long into the future.

The Horizon Pro comes with four optimized Image Modes. Movie mode includes 60Hz MEMC motion compensation, which I promptly disabled. Football mode is designed for fast-paced sports. Office mode is optimized for presentations, and Game mode is meant to reduce lag for consoles connected to the Horizon Pro’s two HDMI inputs. There’s also a Custom mode where every setting can be tweaked at will. I noticed very little difference between Movie and Sports modes, so I left the projector in Movie mode for most of my testing. There’s also a general Brightness setting, which can be adapted automatically using a built-in ambient light sensor. I ignored the sensor and left the projector in Bright mode to help it overcome the long summer days here in Northern Europe.

Regarding gaming, the Xgimi Horizon Pro won’t help you bring home any professional titles. Its input latency hovers around 35ms, which is above the 25ms that Rtings generally considers acceptable on TVs, and its HDMI ports are version 2.0, so you don’t get HDMI 2.1’s gaming-focused features like support for variable refresh rates. But those specs should be more than good enough if you just want to project a 300-inch Nintendo Switch screen onto your wall for an evening of Mario Kart.

Now, as to Netflix support, Xgimi tells me that it’s unlikely to come soon, even though Disney Plus was added recently. According to a Xgimi spokesperson, Netflix requires its own certification process due to its proprietary Open Connect program that works with ISPs to make Netflix streams more efficient. While Xgimi is applying for certification, I’m told to not expect anything in the immediate future. As such, I had to install the Aptoide TV store in order to install the latest version of Netflix, which means fretting about malware. Alternatively, you can cast Netflix content from a phone or tablet, thanks to the Horizon Pro’s built-in Chromecast feature, which is a safer, easier option for most people.

The sound produced by the Horizon Pro is good — not just compared to what you’d normally get from projector speakers but also in relation to the Bluetooth speaker you’d typically want to use with portable beamers. I easily preferred the sound produced by the two integrated 8W Harman Kardon speakers over my trusty (4W) Jawbone Big Jambox Bluetooth speaker when listening side-by-side. The audio from the Horizon Pro sounded fuller by comparison. Obviously, we’re not talking home theater quality (for that, there’s optical audio out), but it’s good enough that you won’t feel compelled to carry an extra speaker around should you take the projection show mobile (as I did multiple times). The Horizon Pro even lets you turn off the LED light and use the projector as a Bluetooth speaker, which I did quite a bit while writing this review.

There are three preset sound modes available, which are aimed at Movie, Music, and Sports. The audio can be further refined with a Volume Balance setting and a DTS Studio toggle to enable a virtualized surround-sound audio experience that’s meant to enhance dialogue and bass. While the different modes and settings do alter the sound output by making it seem wider, deeper, or louder (but with a notable hiss), I left everything set to Movie mode with both DTS Studio and Volume Balance turned on since I was using the Horizon Pro primarily for TV episodes and film, some sports and gaming, and occasional music over Bluetooth. I did enjoy the Sports mode with DTS and Volume Balance both turned off for a more arena-type experience, but the minor improvements usually weren’t worth the effort of toggling all of the options each time I changed content types.

$1,699 is a lot to spend on anything, so you’d better have a clear idea how a projector like the Xgimi Horizon Pro fits into your life before pulling the trigger. But that price isn’t too bad when you consider Wirecutter’s budget 4K projector lists for about $3,000, and the Xgimi is $100 less than The Verge’s budget 4K pick, which isn’t nearly as portable or connected.

Importantly, the projectors that Xgimi is making for Western markets in 2021 are light-years ahead of what it started selling back in 2016. If you’ve got the cash and a dark room, then the Horizon Pro won’t disappoint at home or on the go.