The 12.9 Max Plus is Brydge’s best iPad keyboard yet

The biggest trackpad you can get, if not necessarily the best

Share All sharing options for: The 12.9 Max Plus is Brydge’s best iPad keyboard yet

Brydge has been making iPad keyboards for nearly a decade now, and while the iPad itself has changed a lot over that time, the company has largely followed the same formula: design a keyboard that makes the iPad look like a MacBook Pro. The key design element has been the company’s trademark rubberized hinges, which the iPad slots into to form the other half of a laptop-style device.

Now, Brydge is trying something slightly new. The 12.9 Max Plus, which starts shipping this week, is a keyboard case for the iPad Pro that does away with the hinge clamps and instead makes use of magnets for a sleeker and more convenient experience. The product also leans hard into Apple’s recent addition of cursor support to iPadOS, with a huge trackpad that’s comparable in size to what you’d find on a MacBook Pro.

At $249.99, this is a premium product aimed at heavy iPad Pro users, and it’s only available for the biggest iPad size. Apple’s own Magic Keyboard is clearly formidable competition. But Brydge is able to undercut Apple by $100, and in some important ways, I prefer the Max Plus to the Magic Keyboard.

Our review of Brydge 12.9 Max Plus 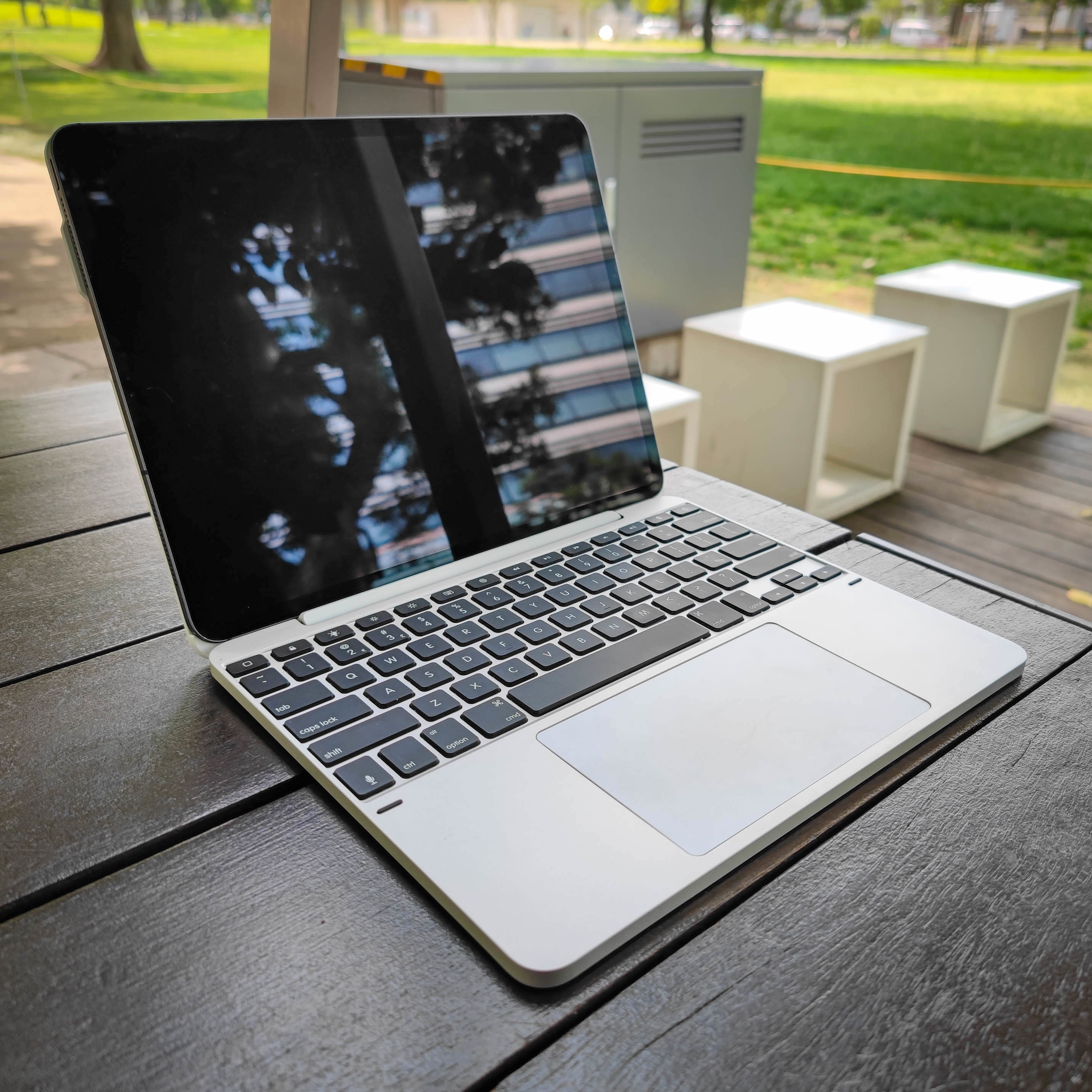 The most obvious difference between the Max Plus and other Brydge keyboards is the magnetic plate in which you rest the iPad. This offers protection for the back of the iPad without having to attach the snap-on magnetic cover that Brydge included on prior models, and more importantly, it’s far less fiddly to attach and detach the iPad than it was to squeeze it into the old-style hinge clamps.

The tradeoff, of course, is that you’re adding a few millimeters of thickness behind the iPad, especially if (like me) you never bothered with the magnetic protective back covers supplied with previous Brydge keyboards. With 17mm of thickness and an extra 970g of weight, the resulting 12.9-inch “laptop” you get with the Max Plus is quite a bit thicker and heavier than a 13-inch MacBook Pro. The heft does help stabilize the combination, however, and it supports a wider range of viewing angles than the Magic Keyboard while feeling much more premium. As a tall person, the Magic Keyboard doesn’t always tilt back far enough to be comfortable for me, but I don’t have a problem with this Brydge. It’s also easier to use on your lap than a kickstand-based solution, as found in many of Logitech’s iPad keyboards.

While the magnet mechanism is convenient, the Max Plus unfortunately doesn’t use Apple’s Smart Connector for power and connectivity. This is still a Bluetooth device that you have to charge over USB-C, though the battery should last weeks or months on a charge depending on your usage (specifically how much you use the backlight). The Smart Connector would have been preferable, but it’s only ever appeared on Apple’s own products and Logitech devices that have been designed with Apple’s cooperation; it hasn’t shown up in any Brydge products or other devices from similarly smaller companies.

Brydge has at least improved the Bluetooth experience in one notable way compared to most of its older products. The Max Plus has a feature called Instant-On that makes use of Bluetooth 5.0 to stay in a low-power state for up to four hours, meaning that if you step away from the iPad and come back it’ll instantly wake with a button press with no need for reconnection. That goes some way to making the combination feel more like a coherent product, because in practice you aren’t likely to find yourself running into laggy reconnection issues during a typical work day.

The keyboard itself is good. It feels a touch more responsive than previous Brydge products, but you’re not getting mechanical-level tactility here, of course — it’s just an above-average laptop keyboard. What really sets it apart when compared to Apple’s Magic Keyboard is the extra function row, which is very useful in iPadOS for things like brightness and volume control.

The trackpad is a key selling point for the Max Plus. It can’t quite match the Magic Keyboard on pure responsiveness, which is no surprise given Apple’s low-level system access, but it does a good job nonetheless, and Brydge has been making continuous improvements to the firmware. It’s a huge trackpad by any standard, which makes using it for things like photo browsing and text editing a lot more enjoyable. Even though it has a diving board-style mechanism that doesn’t let you click everywhere (particularly in the upper left and right corners), there’s more than enough space and I had no problem using it just like I would a MacBook Pro’s.

The Brydge Max Plus isn’t for everyone, but then neither are iPad keyboards in general. Even though Apple came out with a good option last year, it’s very expensive and not without its quirks. What you get with the Max Plus is a less expensive — but still quite pricey — option that, more so than any Brydge keyboard to date, gives the iPad a laptop’s form factor and functionality. It’s not as slick or as inventive as the Magic Keyboard, but it’s more useful for my workflow.

Brydge is really competing with itself here as much as Apple. Its previous highest end model, the 12.9 Pro Plus, just got a significant price cut to $169.99 and offers essentially the same functionality, just with a smaller trackpad and the old hinge design. I prefer the Max Plus, but the Pro Plus is a good option if you want to save some weight and cash.

There are still clear limitations to iPadOS, but cursor support really transformed the experience of working on an iPad, and no accessory embodies that better than the Brydge Max Plus. It’s not perfect, but right now it’s what I’d choose to get work done on the go.