This inexpensive backlight makes your big TV even more immersive

Share All sharing options for: This inexpensive backlight makes your big TV even more immersive

I’ve been intrigued by Philips’ Ambilight televisions for almost two decades. Watching those displays bleed onto the wall in radiant synchronicity is something to behold. I just couldn't justify the price premium, despite the promise of a more immersive viewing experience. Then Philips Hue introduced an external Hue Play Box that adds Ambilight to any TV. But at $229 and requiring you to buy lights to use with it, it was still too expensive for my cheap ass.

A few months ago, I discovered the Immersion TV backlight while checking out Govee’s new Lyra free-standing lamp. The Lyra is cool, but Govee’s Immersion backlight kit seemed like the stuff of my budget-priced dreams. Together, they can transform a bland living room into a hyper-chromatic party. At $80 (and sometimes less if you find it on sale), including all of the components you need to make it work, short of a TV itself, the Govee Immersion kit offers a much better value proposition than Philips. 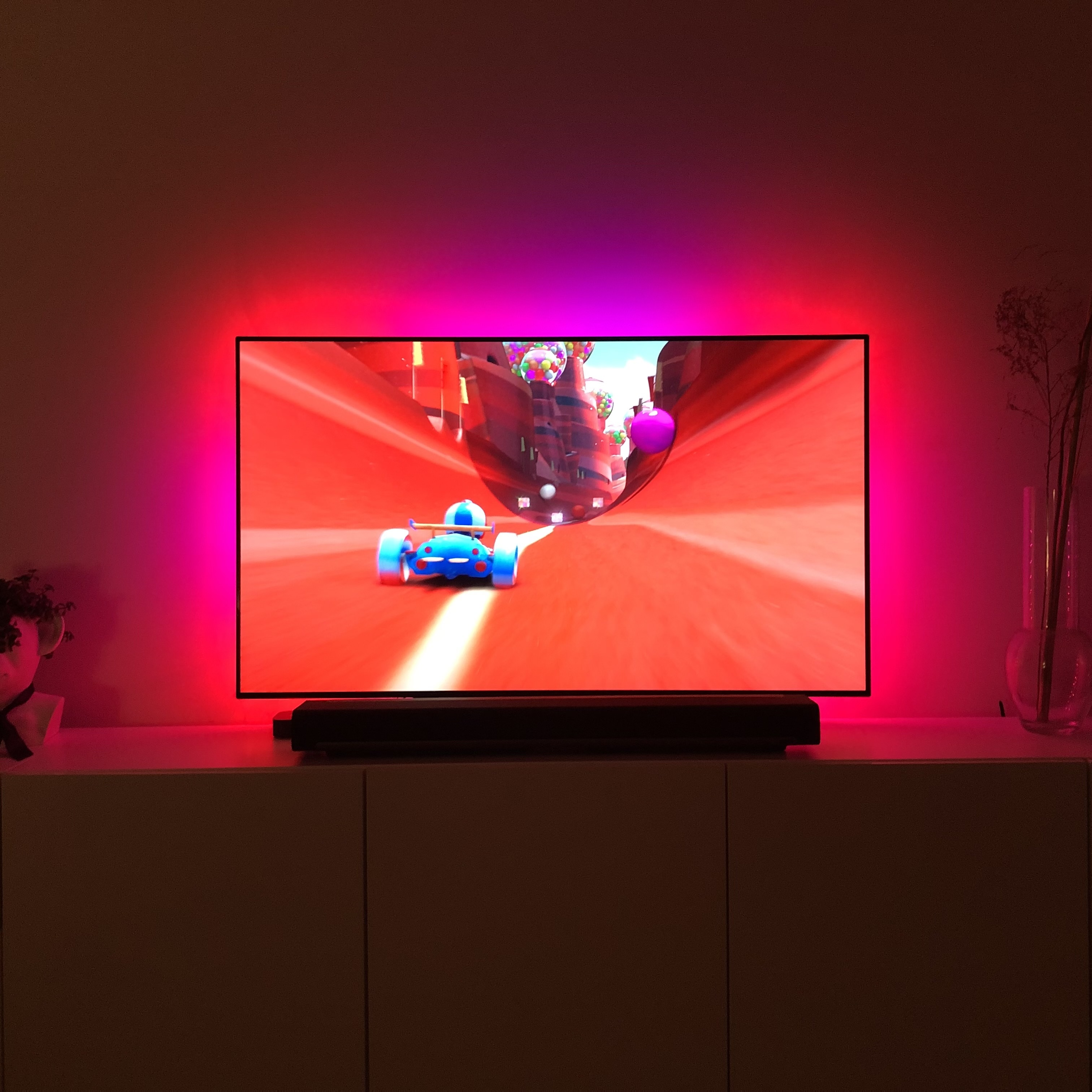 Installing the Govee Immersion light kit on the back of my TV took about an hour, mostly because caution is advised when gluing over 12 feet of LED lights to a thin and expensive LG OLED TV. The Immersion light strip is a single strand of RGBIC LEDs that sit atop a layer of strong 3M adhesive. I used masking tape to stage my installation before removing the back of the 3M tape to permanently attach the LEDs around the entire perimeter of the TV.

Even then, I still had to move the left and right LED sections. It was only after turning on the lights that I realized the strips were too close to the left- and right-hand edges making them visible from the front. Fortunately, the strips peeled away easily enough, allowing me to reattach them closer to the center without needing to reheat the 3M tape with a hairdryer.

Govee says the Immersion kit is suitable for TVs between 55 and 65 inches, with the single LED light strip divided into sections measuring 70cm for the sides and 120cm along the top and bottom. For my 55-inch TV, I had to do plenty of twisting and cajoling of the LED strip to make sure the slack looped at the corners wasn’t visible from the front. It was all a bit of trial and error while making liberal use of the adhesive cable clamps included in the kit. Installation should be easier on larger TVs.

The Govee Immersion TV Backlight relies upon an external camera to synchronize the LEDs with any colors it detects on the display. Conversely, the Hue Play Box only works with content fed to it via HDMI. That’s given Govee the advantage for anyone who relies heavily on content sourced directly from apps installed on their smart TV.

Placement of the camera is crucial to the operation as it watches the edges of the display and then maps the colors back to each LED on the strip. All Govee marketing materials suggest that the camera has to sit on top of the TV. It’s only when you open the companion phone app that you learn it can also be placed at the bottom, which looks much better in my setup. My TV is sitting on a cabinet with a soundbar in front that completely hides the camera mounted below. Unfortunately, the soundbar also blocks most of the bottom strip of LEDs so I don’t get the full 360-degree Ambilight experience.

The downside of mounting the camera at the bottom is an increase in light interference, affecting the accuracy of the Immersion backlight colors. In my setup, I have light spilling in from a nearby garden door creating some minor interference. In the image slider below, you can see how the light output of the Govee Lyra affects the Immersion backlight when turned on. Mounting the camera on top of the TV would have mostly avoided this. But for me, I’d rather turn off the light than stare at the camera all day long. 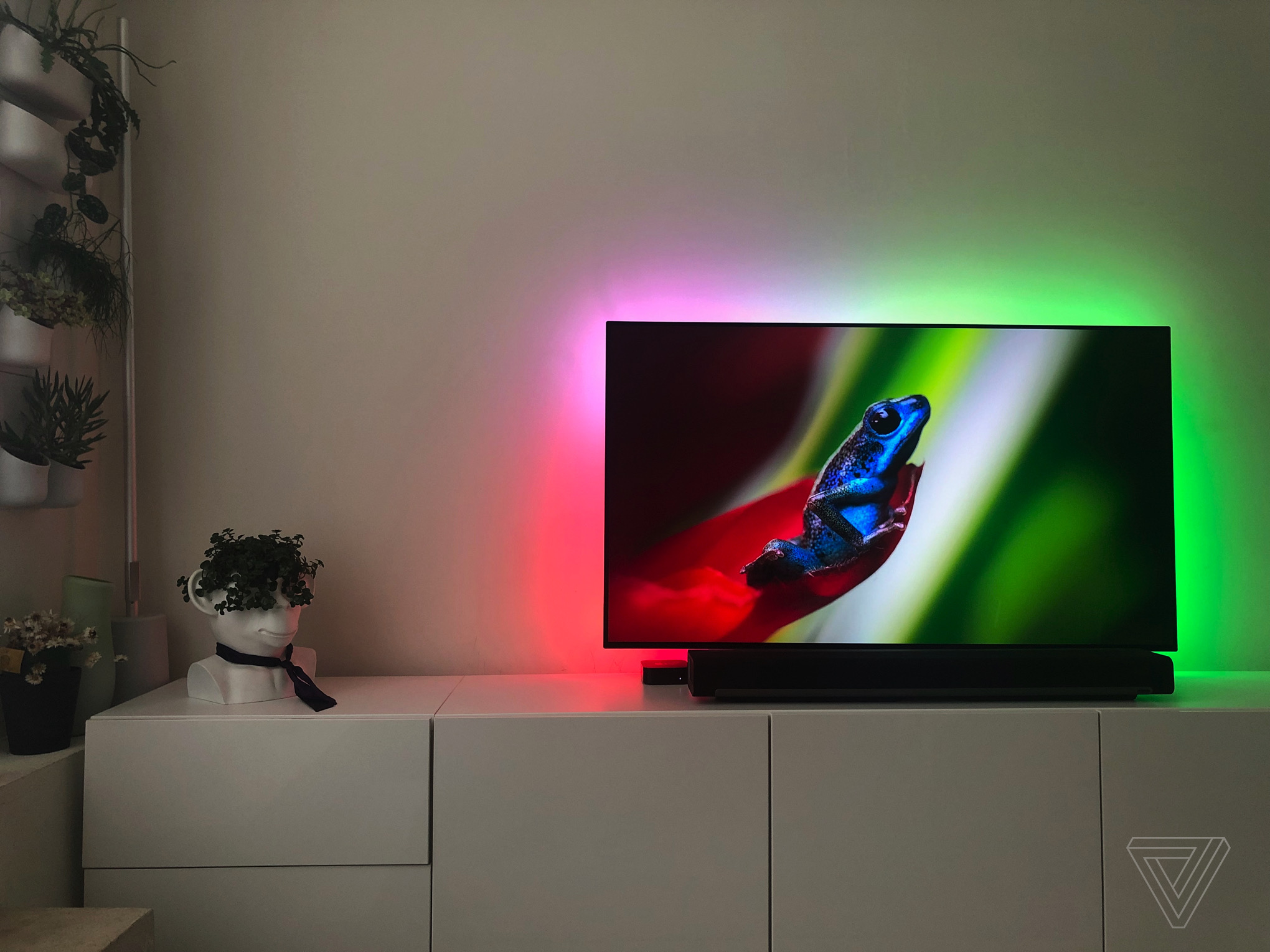 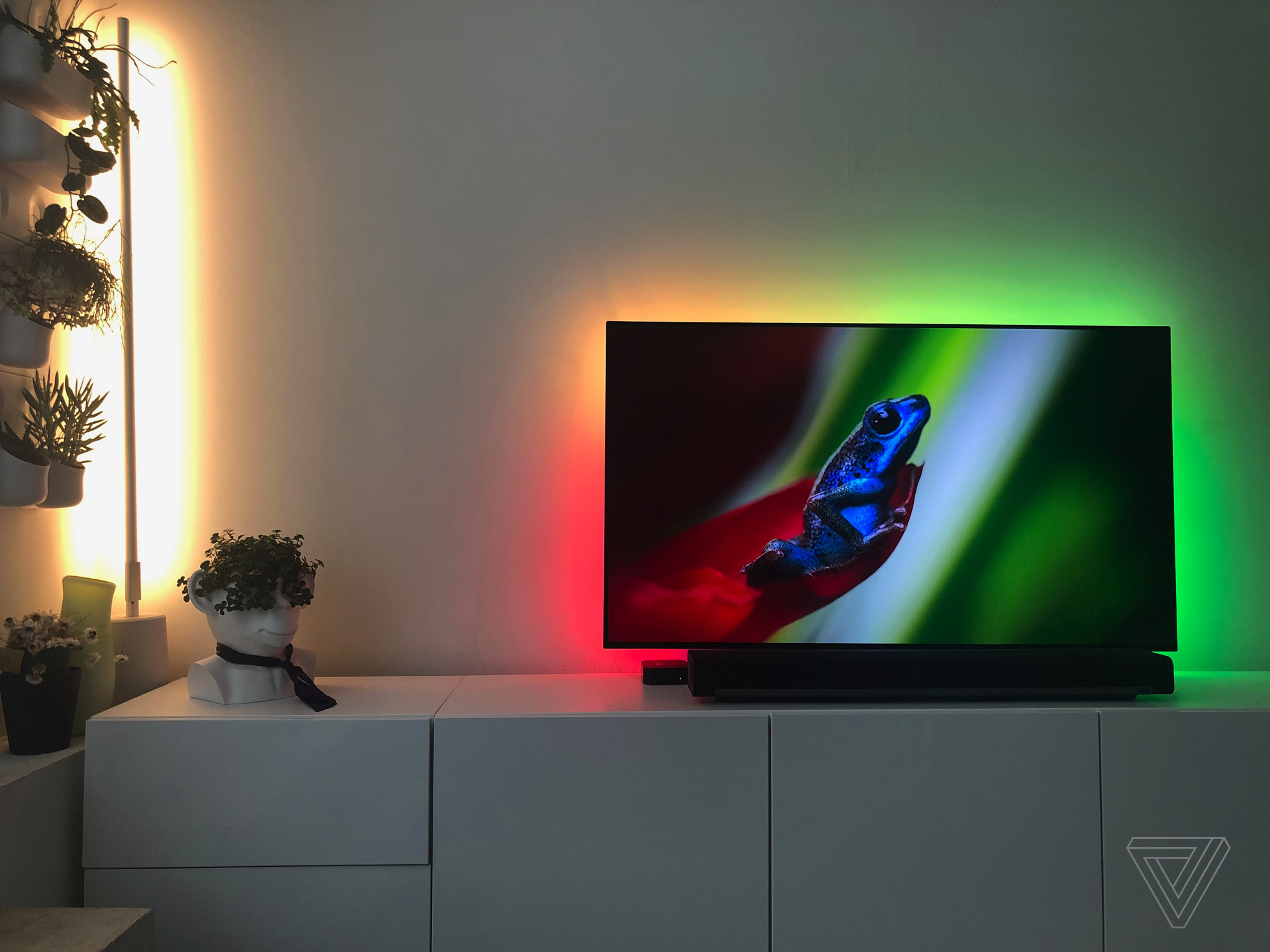 The camera when positioned at the bottom of the TV can pick up light interference as demonstrated by the Lyra shifting colors along the left edge of the TV.

Calibrating the camera is not for the faint of heart as it requires adhering seven orange blocks to the TV display. I affixed mine as if handling live explosives, and the blocks came off without leaving any residue. But boy, did those steps feel icky. Calibrating the fish-eye camera is then a matter of using the Govee Home app to align a camera guide with the blocks. Don’t rush this step. Your diligence will be rewarded with an accurate color map that can be enjoyed long into the future.

Govee Immersion can be controlled with the Govee Home app over Bluetooth or Wi-Fi. There’s also a dedicated control module that sits in line with the LED strip on the back of the TV (using more 3M tape). The lights support Google Assistant and Alexa out of the box. I plugged mine into a smart plug (the TV’s USB port isn’t an option) that automatically turns the LEDs on and off along with the TV. It works well since the Immersion remembers the last mode it was in before powering off.

The Govee Home app is where you’re introduced to an overwhelming set of options. There are interactive modes that make the strips respond to music and video, and static modes built around your preferred color patterns and scenes. It was within the Video mode that I fulfilled my Ambilight ambitions.

Video mode can be set to Part or All. Part makes each RGBIC LED respond locally to what’s happening on the display next to it, whereas All creates a uniform backlight of color based upon some average of what the camera sees on the display. Video mode can be further refined with a Game or Movie selection. Game mode causes the colors to change more abruptly, while Movie results in smoother but slower color transitions.

After a few weeks of testing, I ultimately settled on Part / Movie video modes with brightness set to 75 percent and saturation set to about 15 percent. These settings provide the best balance of immersion versus distraction for the content I watched the most: films, television series, some animation, and lots of soccer during the UEFA Champions League competition.

Soccer looked amazing in these settings, where long single-camera shots show great swaths of green grass and uniformly clad spectators. The adaptive backlighting added substantially to the immersive feel, especially in the evening hours when the Govee Immersion wasn’t competing with the sun.

Govee Immersion in Part / Movie mode can fall behind on content with quick cut edits. All / Movie or Part / Game modes can improve performance.

The Part / Movie settings were less than perfect for watching films with quick-cut action shots. The split-second delay between a display change and the bias lighting detecting it proved distracting in some scenes, pulling the viewer out of the action, especially when the colors were wrong. Switching things to Game (faster response) or All (uniform backlight) settings helped improve the experience. Otherwise, I could just dim the LED brightness to make the backlight less prominent. It was never distracting enough to compel me to turn the backlight off completely, though.

For television shows like The Handmaid’s Tale, I preferred things in All / Movie mode and let Govee choose the uniform backlight colors. More often than not, it chose a deep angry red. How apropos.

I’ve been generally pleased with the accuracy of the color mapping though it does occasionally get confused. Nevertheless, I never want to watch TV without an immersive dynamic backlight again.

Ideally, the Govee Lyra would sync with the Govee Immersion to further enhance the Ambilight-like experience. While you can create Smart links within the Govee app to sync some features of the Lyra and Immersion lights, it’s limited to on / off or color syncing. They cannot sync information collected by the Immersion’s camera. That’s a shame because I’d love to transform the TV area into a makeshift Microsoft IllumiRoom.

On its own, the Govee Lyra is neat but gimmicky. It lacks a Video mode, but otherwise includes all of the same light modes as the Immersion backlight. But none of those are very compelling unless your job is to DJ dance parties for kids. It’s hard to justify a free-standing vertical LED lightstrip that costs $149.99, when the $79.99 Immersion is such a compelling product for so much less.

To actually use the Govee Lyra floor lamp and Govee Immersion backlight, you must agree to the following in the Govee Home app (iOS and Android):