Maingear Element Lite review: the competition is too good

Share All sharing options for: Maingear Element Lite review: the competition is too good

The Element Lite is not the kind of laptop that Maingear usually makes. Compared to its fleet of game-ready laptops, this one stands out with a sleek, minimalist, and thin aluminum-clad design. It’s the only machine in Maingear’s current lineup of laptops that doesn’t have a dedicated graphics chip. Unsurprisingly, it’s lacking in the gaming department by comparison, but it’s practically bursting with other niceties you’d usually find in other high-end productivity laptops, like a Windows Hello IR webcam, Thunderbolt 4, USB-C charging, long battery life, and a touchscreen. Its speakers are good, too.

This out-of-left-field laptop is actually Intel’s NUC M15 design with a Maingear logo slapped on it. In case the name isn’t ringing a bell, my colleague Dan Seifert got a first look last year at this reference laptop designed by Intel. It was created to help level the playing field for smaller OEMs that can’t usually compete in the ultrabook space against leading manufacturers like Dell, HP, and Microsoft, while also showcasing the latest tech and features from Intel. This isn’t the first time that Maingear has co-opted an Intel white label laptop, either; Maingear’s Element is the company’s spin on the previous NUC model that was more gaming-focused.

Maingear isn’t the only company getting a NUC M15 to call its own. Brands like Adata, Eluktronics, ByteSpeed, and Simply NUC are each selling their own take, and naming their own price (though only Adata and Maingear are listing products for sale currently). Maingear officially set the starting price for the Element Lite at $1,399, but at the time of publishing, it only offered models starting at $1,649 with 512GB of storage and 16GB of RAM and going up from there. The model that I tested has 2TB of NVMe storage and 16GB of RAM, costing $1,849. The Adata laptop I mentioned earlier is priced at a much more reasonable $1,699 and has 16GB of RAM and 1TB of storage space.

The Element Lite is a good productivity laptop in terms of specs, but it lags behind the competition in some key ways. Its 16:9 aspect ratio display feels cramped, and its keys are spaced a little too far apart. It’s also too expensive. A sale or discount could help, but even then it’s tough to recommend over a handful of laptops that have equally capable (or better) specs or more appealing features combined with a lower price tag.

Our review of Maingear Element Lite 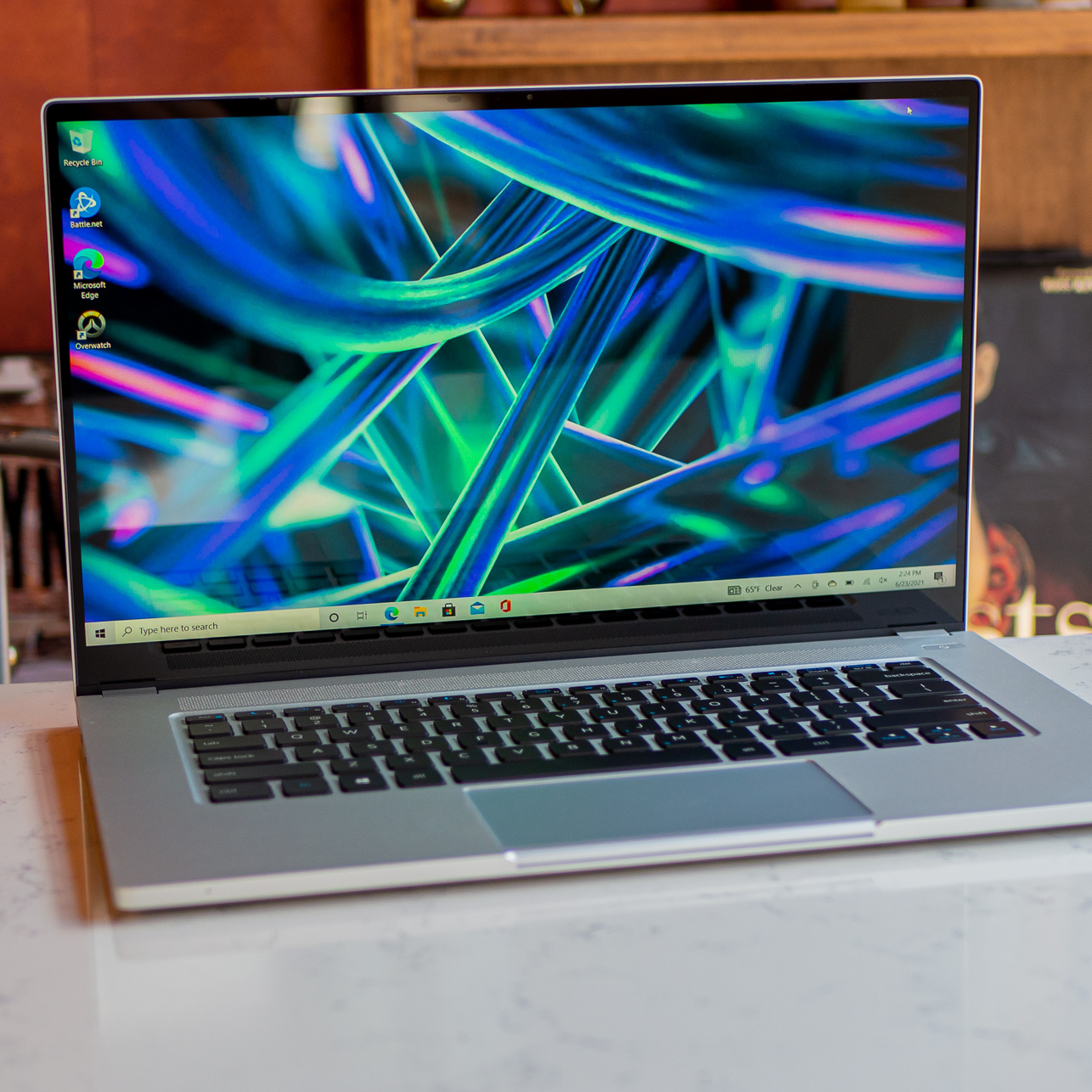 Apple’s 13-inch Macbook Pro with an M1 processor has a more compact chassis, and it rivals the power of Maingear’s machine for $150 less (or $350 less if you want to settle for 8GB of RAM instead of 16GB). If you want to stick with Windows 10, Microsoft’s 15-inch Surface Laptop 4 has a higher-res display, a sleeker design, and a superior keyboard. You can also find this model with similar specs for about $150 less than Maingear’s offering. Both of these models also have displays with a more generous aspect ratio than the Element Lite, which is a boon for productivity work.

As I mentioned, the Element Lite has an identical set of features and components to other NUC M15 variants, like a glossy, glass-covered 15.6-inch, 1080p touchscreen with a 60Hz refresh rate and a 16:9 aspect ratio. This laptop is a showcase for Intel’s latest innovations, including an 11th-gen processor and two Thunderbolt 4 ports. It has an Intel Core i7-1165G7 quad-core processor (base clock of 2.8 GHz, boost clock of 4.7GHz), and Intel’s Iris Xe powers the graphics — all in a portable chassis weighing less than four pounds (3.64 pounds, to be precise). There are four microphones embedded into the top edge of the display enclosure, and a light underneath the trackpad will illuminate blue when you summon Amazon’s Alexa voice assistant with the wake word (if you choose to install the app, otherwise it does nothing).

The all-aluminum design of the Maingear Element Lite (also found in the rest of the NUC M15 models) is very reminiscent of previous generations of the MacBook Pro. Its sharp edges and rounded corners are familiar, as are the black, backlit keys that sit in a recessed section, and the silver color of the aluminum chassis. Even smaller details from that lineup are present, like an indentation that allows its easy-lift lid to open with just one finger, and a center-aligned glass trackpad. Double-tapping the trackpad’s top left corner will turn it off (a white LED lights up to indicate that it’s inactive). The keyboard has backlit keys that feel good to type on, and I have no complaints about the layout — aside from the keys feeling a little too spaced out. For a productivity laptop, I expect to hit the ground running with the basics, and the keyboard was a hurdle that led to typing errors during my first few days testing the Element Lite.

The 15.6-inch display in the Element Lite claims to reach 300 nits of brightness. That’s bright enough to use in a window-filled cafe, but the glossy display means you might need to move the laptop if you’re catching too many reflections. Otherwise, the screen quality is up to par for productivity work — as much as I wish it were a more spacious 16:10 or 3:2 aspect ratio screen like you can get on Apple or Microsoft’s laptops.

Battery life is one of the Element Lite’s most impressive assets, even if Maingear doesn’t list it as meeting Intel’s own Evo standard. During normal use at work with about 15 tabs open in Microsoft Edge, with Spotify and the one-off Zoom call mixed in, it lasted well into a second day of work, or about nine hours. I likely could have extended it a couple more hours had I just been typing and browsing, but it was tough to resist blaring music through this laptop’s speakers. They’re surprisingly good, even at loud volumes. Sound doesn’t resonate with bass here, but songs don’t have that shallow, tinny profile that you’re usually stuck with on most other thin laptops.

I’m pleased with the 720p Windows Hello IR webcam, which logs me in quickly when I wake the computer from sleeping. The video quality of the webcam isn’t fantastic, but it works as intended. What I appreciated about this particular setup is its optional proximity-based feature that can lock (and unlock) the computer if you walk away from it, or approach it. It was satisfying to use; my music on Spotify paused when it went to sleep, then the screen powered on when I walked near it and my music started playing once it unlocked.

Now, Maingear is typically associated with gaming, but this laptop’s name, the Element Lite, is a clue that gaming isn’t a talent it’s particularly adept in. Still, the fast processor, capable integrated graphics, and fast RAM help it achieve passable gaming performance, depending on the game. In Overwatch, a first-person shooter that we’ve managed to run at respectable frame rates on other machines that lack a dedicated graphics card, the Element Lite reached 60 frames per second while plugged into power and with medium graphical settings. Impressively, its fans weren’t audible with the laptop’s volume set to less than halfway. Still, I wouldn’t suggest this laptop to anyone who games on a regular basis, unless those games happen to be older games that have low system requirements.

To use the Maingear Element Lite, you have to agree to:

That’s four mandatory agreements and 15 optional ones to use this product.

I couldn’t help but notice that the Element Lite is a bloatware-free experience with just a few Intel applications pre-installed to get the latest drivers and to tweak the audio settings. That marks a refreshing change, as many Windows laptops (both in and outside of the realm of gaming) are usually loaded with umpteen apps that are often unnecessary — and at worst, obtrusive to the experience. To the credit of Intel’s vision, few Windows laptops can compete with the Element Lite’s bloatware-free user experience, and that helps this laptop feel as much like a reference Windows device, as it is a reference 15.6-inch thin laptop.

If you’re interested in the Element Lite, that means your interest is piqued in the NUC M15 generally. To that end, I suggest that you find the best deal — regardless of whose brand is lasered onto the lid. As for how much storage you get built-in, don’t sweat it too much. The RAM is soldered onto the board, but you can add your own NVMe M.2 SSD by opening up the bottom, which is a great perk for such a thin laptop.

The Element Lite is a well-rounded machine, but the competition is too tough for this kind of laptop to stand out — even if you’re able to wiggle the price down a bit. In addition to the MacBook Pro with the M1 processor, or the Surface Laptop 4 that I mentioned above, you’ll likely be better served by other productivity-focused models like the Dell XPS 15, LG’s Gram 17, and Samsung’s Galaxy Book Pro 360, which cost less than Maingear’s Element Lite and offer better specs or nicer displays. With the options above, you can find one with a higher resolution screen, one with an OLED screen, a more generous screen aspect ratio, or just more versatility with a 2-in-1 design.

Intel didn’t need to pack in all of those features to push back against the competition. Going with a taller aspect ratio and dropping the price might have been enough to change the conversation. But as it stands now, if you’re looking for a premium Windows laptop for productivity work, you’ve got plenty of better options to choose from.