Lenovo Yoga 9i (14-inch) review: sounds like a winner

Lenovo is a big player in the convertible laptop sphere, and the Yoga 9i is its top dog. A sequel to the Yoga C940, the $1,299.99-and-up 14-inch Yoga 9i is a capable laptop in almost every area that matters, with a comfortable keyboard, respectable battery life, and some of the better specs you can get at its price point. But there’s one area where it’s far ahead of the pack — the audio.

Yes, you read that correctly. There’s actually a 14-inch laptop out there with very good audio. I know. I’m shocked to be typing that, too. Though it doesn’t quite surpass the likes of HP’s Spectre x360 and Microsoft’s Surface Pro 7 Plus in many other areas, the Yoga 9i’s innovative speaker design keeps it very much in the premium mix as an exceptional entertainment and multimedia machine. 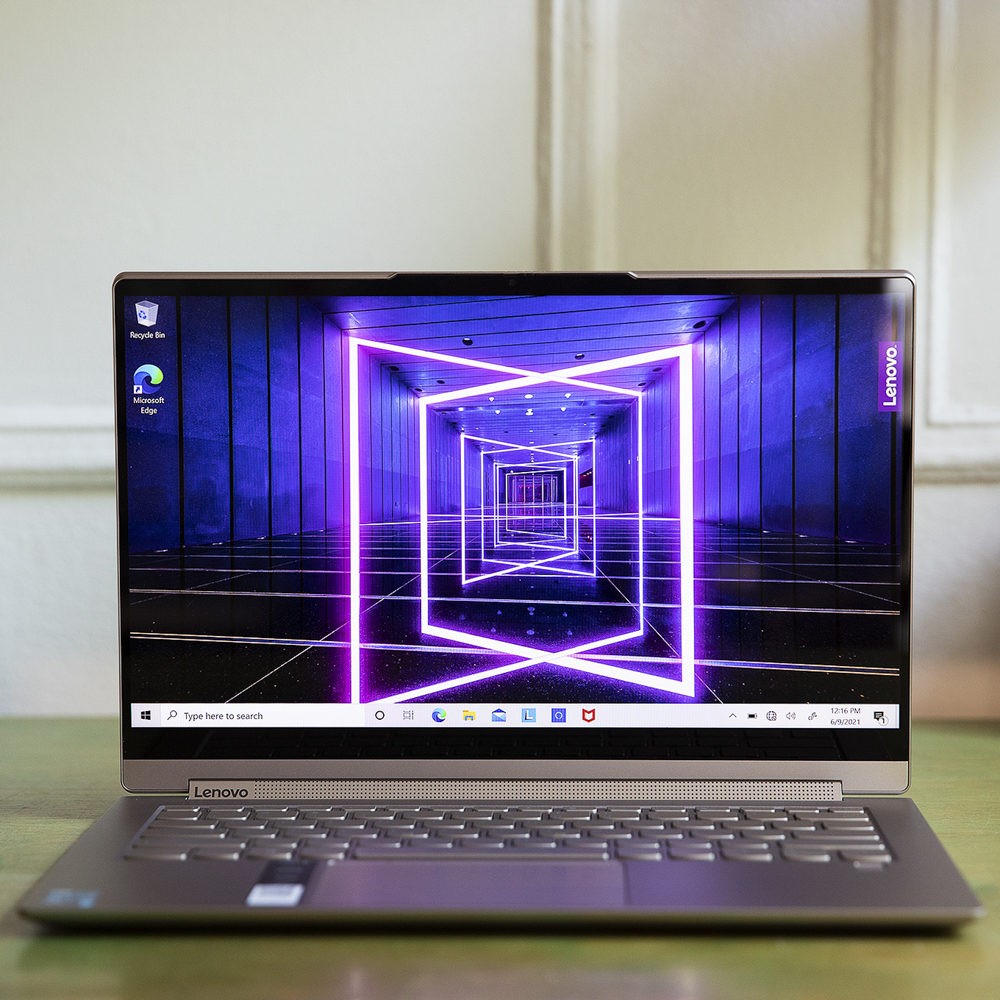 About this speaker system, to start. There are two downward-firing woofers on the bottom. But the 9i’s secret is that the custom tweeters are housed in a rotating soundbar, which is built into the laptop’s hinge. The positioning means that the grills are always facing outward, regardless of whether the laptop is in clamshell, tablet, or tent mode.

I’m not exaggerating when I say this is the best audio I’ve ever heard from a laptop of this size. Its volume more than fills a room, and it sounds great in all orientations with booming bass. The surround quality was also superb.

The 9i comes preloaded with Dolby Atmos Speaker System software, where you can swap between presets for Movie, Music, Game, and Voice as well as personalized profiles and a dynamic mode that detects your content and adjusts the audio accordingly. These do make a difference — namely, the Music mode brings the vocals out more.

Lenovo Yoga 9i specs (as tested)

To complement the sound, the 9i has a very nice 1080p touch display with accurate details and colors. I’d have no problem watching movies and YouTube videos on it, and you can switch between different picture modes (Dark, Light, and Vivid) with preloaded Dolby Vision software. The screen is quite glossy, however, and kicked back a frustrating amount of glare in brighter rooms. And it’s not the brightest around, maxing out at 290 nits in testing. I also wish Lenovo would ditch the 16:9 aspect ratio, as it has for some of its premium models in the business space.

The final thing to call out about the chassis is its garaged stylus. Garaged styluses are sometimes a huge pain to tug in and out, but this one was smooth to remove. The garage’s location on the right side of the Yoga’s rear edge isn’t the most convenient, but it’s definitely preferable to having to store the pen yourself.

The stylus has a new “elastomer” tip that’s supposed to mimic the feeling of a pen on paper. That’s a fair description of how it feels in practice, but it also means it’s not as smooth to write and draw with as other touchscreen styluses. (It’s also tiny — much smaller than most real pens.) And there are two (very small) buttons, which can be mapped to various tasks — erase, left click, copy, paste, whatever you want — in Lenovo’s Pen Settings software. You can check the pen’s battery here as well. Lenovo says it can last 40 minutes on a 15-minute charge.

There’s not too much to say about the rest of this chassis. The backlit keyboard is acceptable and roomy, but a bit flatter than my favorites on the market. The device is fine-looking and sturdy enough, but it doesn’t have the same sleek professionalism as the Spectre x360 14 or the Surface Pro 7 Plus (and the prominent Lenovo logo on the hinge looks a bit corny to me). It’s not the lightest laptop around, but it’s still portable at 3.02 pounds. And the port selection is about as good as you might expect for a laptop this thin, including a USB 3.2 Type-A Gen 2, two Thunderbolt 4, and an audio combo jack.

There are some optional fancy features — an ultrasonic fingerprint reader, an edge-to-edge glass palm rest, a haptic touchpad, and a leather cover — that weren’t included on the model I was sent. Configurations with those extra features start around $1,769.99, currently discounted to $1,239.99 on Lenovo’s website.

The Yoga 9i is verified through Intel’s Evo platform, as are many of its competitors in the premium 2-in-1 space. To qualify, laptops are supposed to offer a number of Intel-selected benefits, including Thunderbolt 4, Wi-Fi 6, all-day battery life, quick boot time, fast charging, and responsive performance on battery. In my experience, check, check, and check.

Performance was as satisfactory as we’d expect from the top-notch 1185G7. The system blazed through a load of 20ish Chrome tabs and booted up noticeably faster than 10th Gen Yoga systems would. Intel’s Iris Xe graphics are more than capable of running some games, as long as you’re not expecting 60fps from anything too demanding. Battery life was also a pleasant surprise, given the power of the processor. I averaged eight hours and 25 minutes of continuous use, with the screen around 200 nits of brightness.

As far as video calling goes, the 9i’s webcam is a bit grainy but serviceable; it has a physical privacy shutter, though it’s very tiny and can be clumsy to move if you have large fingers. The camera doesn’t support Windows Hello (which is a bit disappointing — other top convertibles at this price point like Spectres and Surfaces do have this feature), but there is a fingerprint sensor beneath the arrow keys that you can use to log in. It had trouble identifying my finger once or twice but was quick and accurate otherwise.

The 9i also has two dual-array microphones. These are useful not just for video calling (where they picked up my voice just fine) but for Amazon Alexa, which comes preinstalled on the Yoga. Not only can smart home devotees give Alexa voice commands via the Yoga, but they can also activate Amazon’s Show Mode, which will change the Yoga’s home screen to look like the home screen of an Echo smart display. Hey, don’t let me stop you.

My one disappointment here is bloatware. The Yoga 9i doesn’t come loaded with a ton of junk like some budget computers do, but it does force McAfee LiveSafe on you. McAfee alerts were popping up all over the place while I set the device up, and sometimes even appeared in windows in the middle of my screen and interrupted what I was doing. The program is a pain to uninstall, requiring you to close all of your tabs and then to restart your computer. It’s not a huge issue in the grand scheme of things, but it rubs me the wrong way to see this on a $1,500 laptop.

Overall, though, I have very few complaints. The Yoga 9i is an excellent 2-in-1 with standout audio. But is it the best? To answer that, we need to compare it to HP’s Spectre x360 14, the reigning monarch of the 14-inch convertible sphere.

At MSRP, the Spectre is $180 more than the Yoga for identical specs (though it has Intel’s Core i7-1165G7, a slight step down from the 1185G7). Its main advantage over the Yoga is its design. The Spectre is a really beautiful laptop with gold accents and beveled edges; it wouldn’t look out of place in a jewelry store. The Yoga 9i, while far from ugly, will look just about like every other laptop you’ll see in a given business meeting or lecture hall. Another significant advantage the Spectre has is the 3:2 aspect ratio, which is more roomy and comfortable for multitasking use than the Yoga’s 16:9 panel. And the Spectre is just a little bit better in many other areas. I like the keyboard just a bit more, there’s one additional port (a microSD slot, which can be quite valuable for extra storage), the webcam is better, it’s a teensy bit lighter, and it gave me around two more hours of battery life per charge.

So the Yoga 9i ultimately doesn’t take the Spectre’s crown. Still, it delivers such standout audio — a realm where so many expensive laptops are flatly terrible — that I’m glad it exists as an option for people who really value the quality of their music and movie soundtracks. And the 9i is certainly functional enough in every other area that if you’re looking for a convertible and the Spectre is out of your price range or if standout audio and a garaged stylus are priorities for you, it’s one to consider.

Agree to Continue: Lenovo Yoga 9i

The Lenovo Yoga 9i presents you with multiple things to agree to or decline upon setup.