The value of this laptop hinges on future support

There are a lot of 13-inch and 14-inch laptops out there, but very few offer much in the way of user-upgradability. Framework, a San Francisco-based startup, sees an opening in the market there. The new 13.5-inch Framework laptop allows customers to upgrade and replace not only internal parts (RAM, battery, storage), but also external components (the keyboard, bezels, and ports).

If you’re very particular about your specs, you can also order a “DIY edition,” including parts of your choosing, and assemble the laptop yourself. I suspect most people will go for one of the three pre-built systems that Framework has on offer, which can then be tweaked as needed.

Outside of its customizability, the Framework is a fairly standard productivity ultraportable. It’s a bit smaller than an M1 MacBook Pro, at 2.87 pounds and 0.62 inches thick. The chassis incorporates recycled materials. There’s a decently bright 3:2 display (with no touch option as of now), and a usable keyboard and touchpad. You’ll get decent performance from Intel’s 11th Gen processors, and okay (but unexciting) battery life.

In other words, upgradability is the reason to buy the Framework laptop — there’s not much else to discuss here. And while it looks like a good package from where I’m standing, much of its value proposition hinges on whether the company lives up to its promise of supporting the device for years to come.

Our review of Framework Laptop 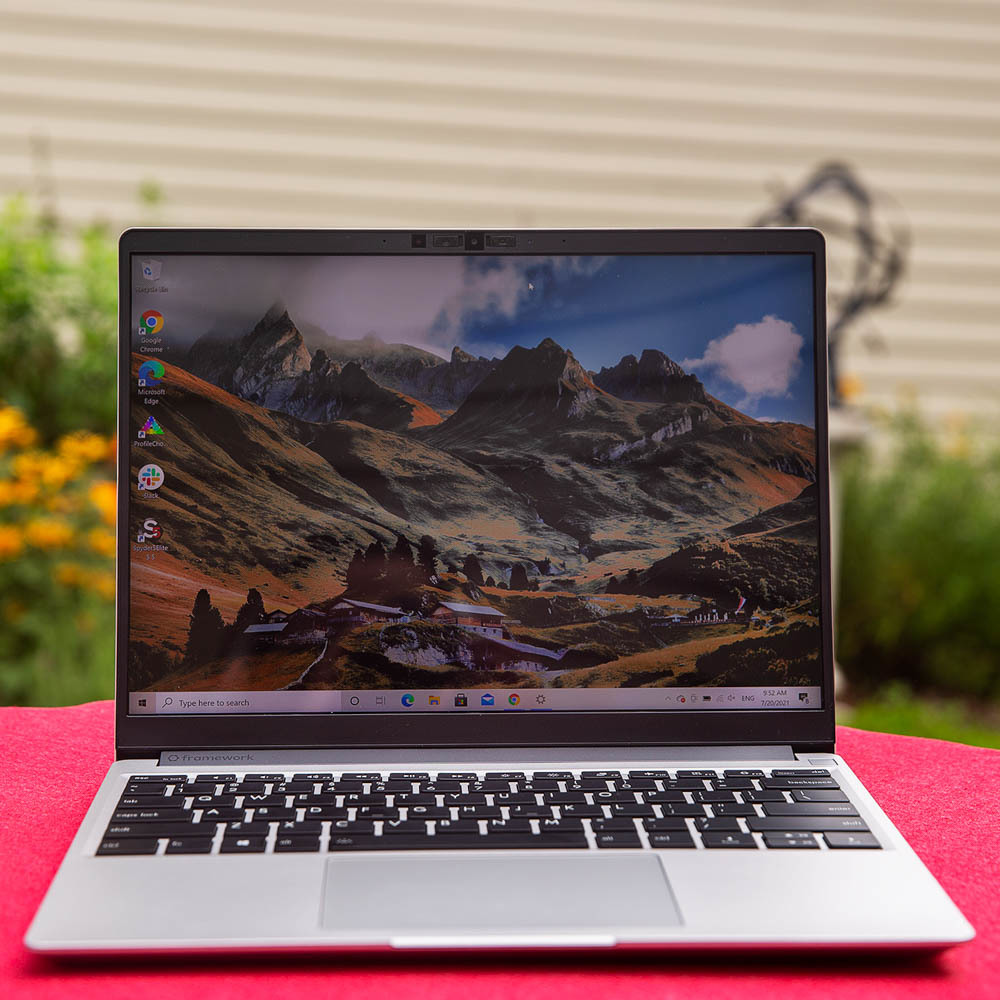 The most unique benefit the Framework offers is the opportunity to customize ports. The chassis has four bays, but you can order as many expansion cards as you want, including USB-C, USB-A, microSD, HDMI, DP, and storage expansion (250GB or 1TB). Framework says more options are coming. I stuck in a USB-A, a USB-C, an HDMI, and some extra storage, and it was a very easy task. The cards are essentially dongles — they slide right in, and you can swap them while the computer’s on.

I was also able to swap out the black bezels on the model I was sent for some white ones. This took about 10 seconds. The top and side bezels attach to the chassis via magnets, and there are strips of adhesive along the bottom edge, so it’s just a matter of pulling one frame off and sticking another on — you can do it while the laptop’s running. (Framework claims that the adhesive is reusable, so you can swap bezels back and forth.) You can also replace the keyboard, touchpad, and fingerprint reader, both individually and as a sheet.

Then, you can pop the keyboard off to tinker with the internal components — even the mainboard. This is easy enough to do, but one annoyance is that the chassis is held together with T5 screws, which won’t play nice with a standard Phillips screwdriver. (Framework says this is because the T5 avoids stripping issues that can come up with Phillips screws.) If you don’t already have a kit with a T5 screwdriver, you’d better make sure you don’t lose the tool that Framework sends with the laptop (and it’s small — I’m sure I would lose it).

In theory, all of these replacement parts will be available on a centralized marketplace that’s also open to third-party manufacturers. Each of the various components has a QR code on it that, when scanned, will pull up a purchase page for the part’s replacement. This marketplace isn’t live yet, so I can’t speak to what’s actually going to be available there — Framework says it’ll be up in August.

That sort of underscores a theme of this review, which is that so much of this laptop’s value hinges on what its promised ecosystem and support network will actually look like. There are a few guides on Framework’s website — for setting up the pre-builts and the DIY kit, replacing the bezels, replacing the keyboard, and replacing the mainboard — but some processes that people will likely want are still missing as of this writing. There’s no guide to replacing the memory, for example (you have to find that in the mainboard replacement guide). Framework says that’s coming soon.

I also haven’t been able to find a list of supported parts, or a list of each screw and its size, which could make losing a screw a nightmare. Framework says the former list is coming soon, and that it will add screw specifications to its repair guides “as we go.”

To use the Framework Laptop, you have to agree to:

That’s six mandatory agreements and 12 optional ones to use this product.

The Framework’s build quality is a bit below that of top contenders at this price point; you’re paying a bit extra for the Framework’s futureproofing promise. The whole thing has a plasticky feel — it’s not cheap, but it feels closer to Acer Aspire than it is to Dell XPS. And there’s some flimsiness. Specifically, there’s a bit of flex in the keyboard and a whole bunch in the screen. (I was actually worried about snapping the latter and didn’t torque it as much as I could have.) And while I was never worried that the magnetic bezels were going to fall off, they’re not too hard to pull loose, and I could definitely see them snagging on things or accumulating debris underneath. I do like that recycled material is being used here, including 50 percent PCR aluminum in the enclosure, “an average of” 30 percent PCR plastics, and 80 percent PCR packaging.

Another thing to call out is the 3:2 display. It’s one of the few parts of this laptop that can’t currently be upgraded; you’re stuck with a 2256 x 1504 non-touch panel. It reached 391 nits of brightness in my testing, which is quite good, and generally delivered a sharp picture — and the 3:2 aspect ratio provides a lot more vertical space than the 16:9 panels you’ll find on many 13-inch notebooks. It is quite glossy, though, and kicks back a bit more glare than I’m used to seeing from panels in this price range.

I’ll run through the rest of the laptop; the takeaway again is that reparability is the Framework’s only real calling card. The keyboard is nicely backlit, with almost no bleed, and comfortable with 1.5mm of travel. There’s a 1080p webcam with a physical shutter — its picture is an improvement over traditional 720p laptop fare. But neither is so astonishingly good that I’d buy the Framework just to get it.

Performance-wise, the base model was fine. The bottom sometimes got toasty under my load of around a dozen Chrome tabs and apps, but it was never uncomfortable to use on my lap. Fans were occasionally audible, but mostly silent.

All three processor options come with Intel’s Iris Xe integrated graphics — there’s no GPU option. The integrated GPU isn’t enough to run highly demanding games, but it should do a good job with League of Legends and such. I got some lightweight photo editing done with no problem, though it wasn’t quite as snappy as I’ve seen on Core i7 machines.

Battery life was similarly acceptable but unremarkable. I averaged around six hours and 12 minutes of continuous work use with the screen at 200 nits of brightness. You can get much more from these specs: we saw seven to eight hours from the Surface Pro 7 Plus, which is $300 more for a Core i5 model.

First and foremost: it’s admirable what Framework is trying to do. This is a laptop that DIY computing enthusiasts have been waiting for. And there’s certainly a lot here that’s promising. The ports and bezels are easy to swap, even if you’ve never upgraded a computer before — and that’s a legitimately unique feature. Plus, the fact that RAM isn’t soldered, in a chassis of this size, is an upgradability victory in itself.

But this community has been burned before. From Intel’s Ghost Canyon NUC to Alienware’s Area-51m, the virtual graveyard is littered with promised modular computers that never panned out because the company stopped making hardware for them. Dell was recently sued for allegedly promising that the Area-51m R1 could be upgraded to future Intel CPUs and Nvidia GPUs, which did not end up being the case. This kind of device is hard to make and even harder to support over time.

I asked Framework how many generations of Intel CPUs it was committed to supporting, and the company didn’t give a direct answer. A spokesperson stated, “We’ve been evaluating upcoming silicon roadmaps, and don’t see anything that makes us concerned about compatibility with our current chassis. We will continue to support the existing chassis for the forseeable future.”

Sure. But until I actually have an Alder Lake mainboard in my hands, I’m hesitant to get too excited. Whether the Framework is a good purchase will depend on whether the company is actually able to forge ahead with this chassis — how long it continues releasing new modules, and whether it’s able to build a robust library of supporting materials. It’ll also depend on how good the promised marketplace is, and how robust the component selections are. Those are the real benefits of this device. Without them, the Framework is mostly an unremarkable laptop with lots of QR codes.