But it’s not for home VR

Share All sharing options for: HTC’s Vive Focus 3 is a great prototype for a true Oculus Quest rival

Let’s get this out of the way: you shouldn’t buy the HTC Vive Focus 3 for home VR.

The Vive Focus 3 is HTC’s latest virtual reality headset, part of the Vive line that it first released in 2016. The Vive helped establish the modern VR industry, and the Focus 3 is one of only two big-brand standalone (as opposed to PC- or console-tethered) headsets on the market alongside Facebook’s Oculus Quest 2.

But as Facebook lengthens its lead in consumer VR, HTC has voluntarily taken itself out of the running. The Focus 3, which opened for preorders last month, is meant for businesses, research institutions, and other professional settings. It’s equipped with a small suite of apps that hold little consumer appeal, and it is sold with HTC tech support and other enterprise-oriented features. At $1,300, it costs more than four times as much as the Quest 2’s $299 base price. Again: if you want a device for playing video games, exercising, or using most VR social spaces, don’t buy HTC’s standalone headset.

So why write about it? Because I’m holding out hope that in a few years that could change. The Vive Focus 3 has polished, premium-feeling hardware that would feel great in a consumer product, while not being weighed down by the Quest’s Facebook-shaped baggage. It feels like a formula for building genuinely competitive home VR hardware — even if HTC isn’t making a play for that yet.

Our review of HTC Vive Focus 3 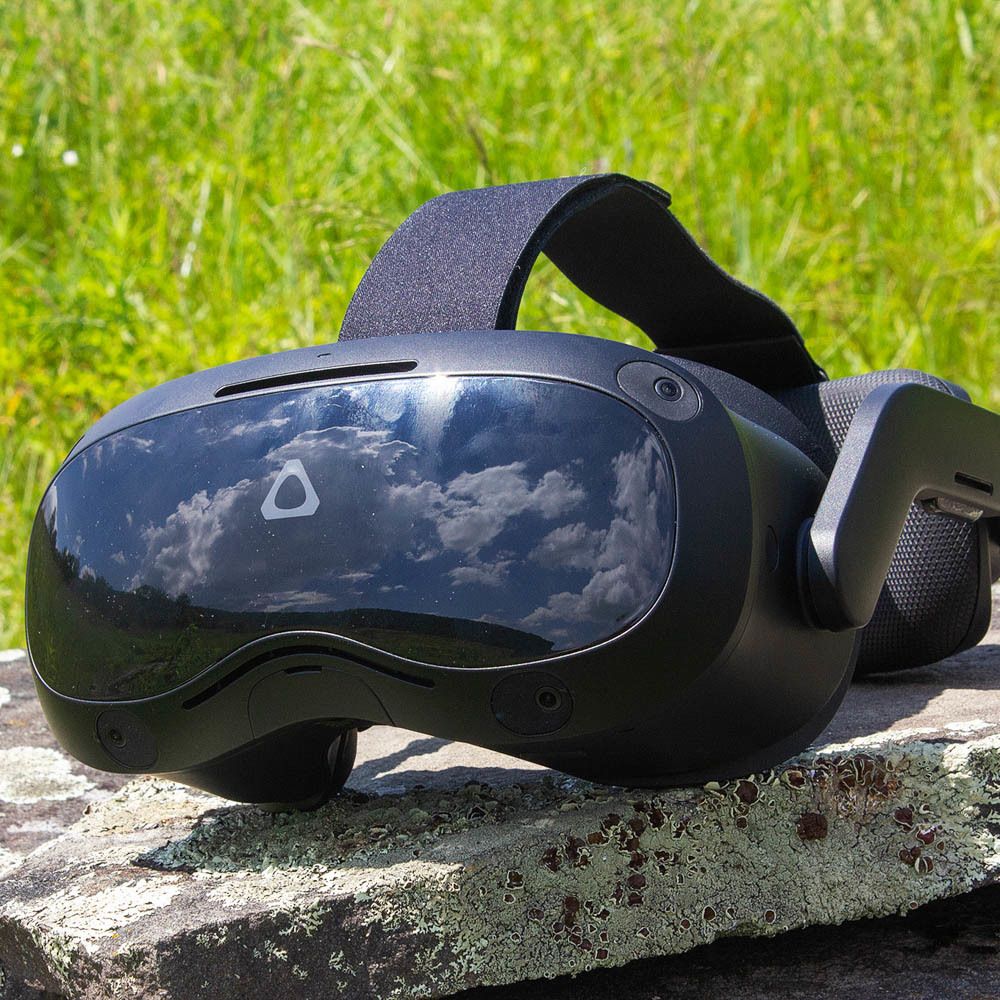 The Focus 3 is HTC’s third generation of standalone headsets, or VR systems that are totally self-contained rather than plugged into a computer. It’s also the first Focus that really looks like a finished product. Where the 2018 Vive Focus and 2019 Focus Plus had a strange, swept-back look, the Focus 3 has a no-nonsense matte black design that resembles bulky goggles, with a shiny front plate where you’ll find the four cameras that handle head and hand tracking.

HTC’s headset is larger and heavier than the Oculus Quest 2; it’s closer in size to the original Oculus Quest. But its design makes it far more comfortable than the original Quest or the Quest 2 with its default strap. The Focus 3 ships with a cloth and plastic headband that tightens with a ring at the back, similar to the Elite Strap that Facebook sells for $49. VR headsets can still be tricky to wear without getting a headache, but the Focus 3 is more comfortable than most, as long as you’re careful to get a good fit.

The Focus 3’s big selling point is a 5K screen (or 2448 x 2448 pixels per eye, compared to the Quest 2’s 1832 x 1920) with a 90Hz refresh rate and 120-degree field of view (compared to 110 degrees on most consumer headsets). The display isn’t as extraordinarily sharp as Varjo’s professional headsets, but it’s as crisp as anything I’ve seen in a consumer system. While there’s still a noticeable black ring around your field of view, it’s a little less intrusive than most of its competition. The only real drawback is some prominent “god rays” — a side effect of some VR lenses that can introduce halos of light in high-contrast images.

It’s hard to practically evaluate the Focus 3’s maximum performance because HTC’s software selection is extremely limited — you won’t find graphically demanding games that clearly push its limits. But there also aren’t any red flags with its SnapDragon XR2 — the same chip used in the Quest 2 — even with the demands of the higher resolution display. The headset’s tracking worked perfectly for me under bright and dim light, especially compared to the earlier Vive Cosmos’ cameras at launch, and my battery lasted just shy of three hours with a mix of 3D experiences and web browsing, which is comparable to the Quest 2.

I don’t love the Focus 3’s use of directed speakers instead of headphones; as with basically all speaker-based headsets, some sound bleeds out and is audible to people around you. But it’s less noticeable than, say, the Valve Index’s speaker bleed, and the audio itself generally sounds just fine. (There’s also a 3.5mm headphone jack and the option to pair Bluetooth headphones.) The only odd note is an unusually loud fan that also blows a very light breeze across your face — which, like the god rays mentioned above, is noticeable but not usually disruptive.

Meanwhile, the Focus 3 is full of thoughtful little hardware touches. Its face mask is padded with the soft, non-absorbent material you’d find on a nice pair of headphones, not the porous padding many headsets (including the Quest 2) use — so you can clean it easily after sessions instead of dealing with a sweat-soaked ring of foam. The battery is swappable and located at the back of the headset for better balance, with a four-light charging indicator that gives you an immediate, detailed look at how much battery power you’ve got. There’s a microSD card slot for expanding the default 128GB of storage, as well as a wheel at the bottom to let you focus the headset, rather than the Oculus Quest 2’s awkward three-setting slider.

Features like swappable batteries are more useful for business customers — who might want to run a headset all day — than the average consumer. But they add up to a well-made device with bells and whistles Facebook either doesn’t have or sells separately.

The Focus 3’s controllers are a big step up from earlier Vive designs. HTC held onto the original Vive’s wand-like controller shape for years, but it’s thankfully given the Focus 3 a now-standard Oculus Touch-style interface: each motion controller has two triggers, two face buttons, a menu button, and an analog stick, and they’re contoured to fit your hands. Like most Vive headsets, they use built-in rechargeable batteries instead of disposable AA ones — which sacrifices the immediate convenience of a swappable battery but also feels distinctly less wasteful, particularly when the controllers last much longer than the headset and both charge in an hour or two.

Unfortunately, the Focus 3 controllers still feel cheap compared to the much less expensive Oculus Touch controllers — or, for that matter, the Focus 3 headset hardware. Also, the main triggers have a distinct click, but they oddly fire just before you hit it. It creates a confusing delay if you’re pulling them quickly and repeatedly, like you do when hitting letters on a VR keyboard, and it feels simply pointless if (as I did) you just learn to not fully pull the triggers.

Put the hardware aside, and the Focus 3 drives home how important native app ecosystems are for standalone headsets. The Focus 3 has a small “Business App Store” with specialized productivity tools and a few games, but you can’t even directly buy apps inside it; you have to open a separate window to get a license that will put them in your library. Companies can run their own software or use some of the default apps like Vive Sync, a virtual meeting room.

The most broadly consumer-oriented app I’ve found is Firefox, which works like any VR browser: normal websites appear in a box in front of your face, and WebXR sites let you click a button to enter a web-based VR experience. WebVR is a frustrating reminder of how powerful the web could be for VR. It easily supports lightweight VR apps and games like a Beat Saber-style rhythm game called Moon Rider. But there’s no clear demand to build or optimize these apps, either — so most remain in the experimental or tech-demo stage. While the web holds the promise of easy cross-platform VR, it’s no substitute for a native app store.

That’s not a knock on the Vive Focus 3, because I think HTC is right to avoid the consumer market. Facebook is likely subsidizing the super-cheap Oculus Quest 2 with its monumental ad revenue elsewhere, and it’s acquired a library of first-party games HTC couldn’t currently match. HTC’s Viveport PC VR store has always felt like a shadow of the Oculus Store or Valve’s SteamVR, and abruptly jumping into mobile VR would just make the gap more pronounced.

Even so, HTC has built the first product that feels like a potential competitor to Oculus’ mobile VR, and the VR world needs that kind of competition. Facebook has funded a lot of excellent experiences, but it’s also alienated some VR fans with its aggressive Oculus-Facebook integration, particularly as it starts introducing ads into the Quest. Some developers feel pressured by its market power. And while PlayStation’s upcoming PSVR 2 could offer solid indirect competition, it still won’t have a Quest-style self-contained design. But the Vive Focus 3 proves that making a true rival is more than possible — for a price.

Photography by Adi Robertson / The Verge

To use the HTC Vive Focus 3, you must agree to