Share All sharing options for: Lenovo ThinkBook 13S review: business on a budget

Priced a tier below Lenovo’s world-class ThinkPads, the ThinkBook 13S targets small- and medium-sized companies and business users looking for a less snazzy device at a lower cost. But the ThinkBook’s price tag shouldn’t fool you — it’s a contender. And I’m impressed by the package the ThinkBook offers for its sub-$1,000 price, which includes solid performance from Intel’s 11th Gen processors, a high-resolution 16:10 screen, and surprisingly good audio. For everyday work use, it more than gets the job done.

Our review of Lenovo ThinkBook 13s 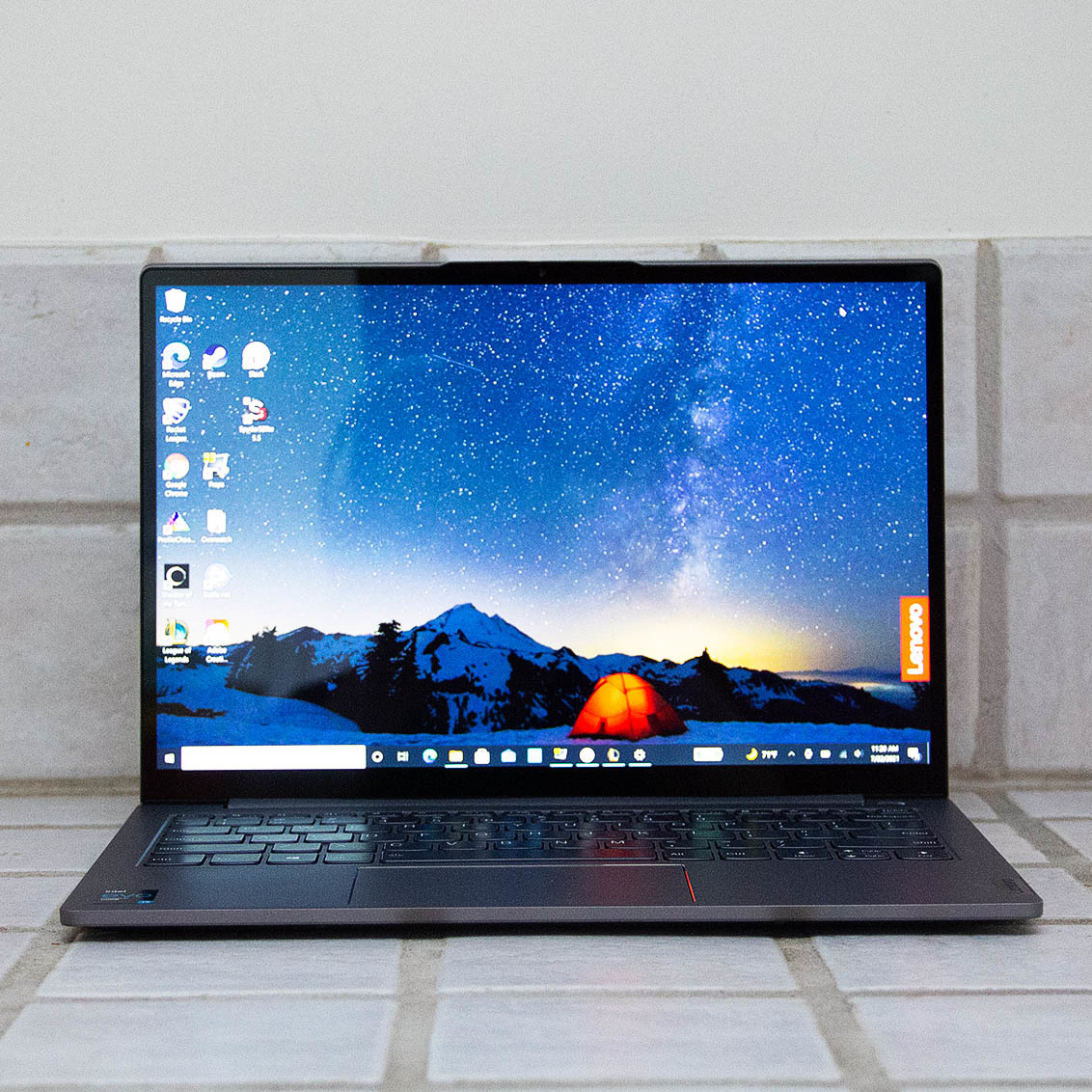 The main thing to know is: don’t buy this expecting a ThinkPad. The ThinkBook looks quite different, with a silvery-gray keyboard deck, a gray ThinkBook logo, and a dual-tone lid somewhat reminiscent of Google’s Pixelbook. It also lacks many of the ThinkPad’s famous features like the discrete mouse clickers, TrackPoint nub, and unique keyboard layout. That said, it also didn’t pick up a ton of fingerprints (a gripe I sometimes have with ThinkPads), and it’s quite portable at 0.59 inches thick and 2.78 pounds.

The keyboard also isn’t a ThinkPad keyboard — which is unfortunate because ThinkPad keyboards are consistently my favorites. The ThinkBook’s is still fine, but it doesn’t have dedicated Page Up and Page Down keys or inverted-T arrow keys like most modern ThinkPads do. It’s also a bit flat for my taste, though it has a nice click. The touchpad is similarly functional, but the texture is a bit coarse and took some getting used to.

Two things do stand out about the ThinkBook 13S. It has the likes of the Dell XPS 13 and the MacBook Air beat with its port selection, which includes two USB-A 3.2 Gen 1, a Kensington lock slot, one USB 4 Type-C with Thunderbolt 4, one HDMI 2.0, and one combination audio jack. (The included 65W charger will occupy the USB-C port when the ThinkBook is plugged in, so I do wish there were one more.) Second, I was surprised by how good the audio was. I could actually hear the bass from the 2W stereo speakers, and my music was loud and clear overall. There was a tiny amount of distortion and echo at maximum volume, which bumping the sound down a bit eliminated.

Elsewhere, the display is sharp but on the dim side, maxing out at just 244 nits in our testing. This is okay for indoor use, but it wouldn’t be great for anywhere particularly bright (and especially not outdoors). And it’s dimmer than some competitors; the ZenBook 13 gets up to 368 nits, while the XPS 13 can break 400. I do appreciate that it’s 16:10, giving you some extra vertical space compared to the 16:9 panels you’ll often see on 13-inch laptops. It’s also 2560 x 1600, and $829 is an excellent price for that resolution. The webcam delivers an accurate but somewhat grainy picture and isn’t compatible with Windows Hello. If you do want to use that service, there’s a fingerprint sensor built into the power button that’s quite fast and never gave me trouble.

That’s pretty much the exterior of the 13S. It’s unexciting but dependable, and it will certainly get the job done. That’s true of the insides as well. The ThinkBook is a solid performer.

This ThinkBook is Intel Evo certified, which means it meets Intel’s various requirements to be a top competitor, including instant wake, fast charging, and responsive performance. The Core i5-1135G7 was largely fine in my day-to-day tasks. I saw a bit of a slowdown when I was pushing a highly demanding workflow — including multiple downloads running, files copying, around a dozen Chrome tabs, and some photo editing on top — but anything less than that was snappy.

The ThinkBook also proved competent in content-creation workflows, though not a standout. It got a 265 on the Puget Systems benchmark for Premiere Pro, which tests both live playback and export performance at 4K and 8K. That actually beats the XPS 13 with a more powerful Core i7-1165G7 on that benchmark. It also beats the ZenBook 13 OLED with an AMD Ryzen 7 5800U, though it doesn’t come close to touching the M1 MacBook Air. In short, this device did much better on heavy graphics work than I’d expect from a machine at this price range. (I wasn’t able to run our real-world media export on this device because Premiere kept crashing in the middle of it — that could be Lenovo’s or Adobe’s fault.)

This device wouldn’t be the best choice for video professionals, of course, but those results underscore how good of a deal this device is. Despite costing a few hundred bucks less than the XPSes and ZenBooks out there with similar specs, it’s holding its own on the benchmarks.

To start using the Lenovo ThinkBook 13S, you’ll need to agree to the following:

That’s six mandatory agreements and 10 optional agreements to use the ThinkBook 13S.

This laptop also isn’t meant for frequent gaming (few laptops this size are), but it can certainly run more casual and browser-based fare. It averaged 35fps on Rocket League’s maximum settings at native resolution and 52fps at 1080p. Neither of those hit the magic 60 mark (the ZenBook 13 OLED and the XPS 13 both did), but I absolutely would have played the game at both settings — it was smooth and looked great. The ThinkBook also averaged 168fps on League of Legends at native and 179fps at 1080p, which also loses to the ZenBook as well as the XPS.

That said, the difference on lighter games doesn’t matter as the ThinkBook’s 60Hz screen will only show you 60fps. And the ThinkBook actually did better, comparatively on heavier titles. It averaged 57fps on Overwatch’s Ultra settings at 1080p (to the XPS’s 48 and the ZenBook’s 54). And while it chugged through Shadow of the Tomb Raider (lowest settings, native) at just 22fps, it achieved a more impressive 34fps at 1080p, which is closer to the MacBook Air (38fps) than it is to the XPS (22fps), and it also beats the ZenBook (30fps). Overall, these results are mixed, but the ThinkBook is certainly holding its own among more expensive and higher-specced Windows competitors.

On battery life, though, not so much. I got seven hours and 12 minutes using the ThinkBook 13S as my primary work driver with the screen around 200 nits of brightness. That’s not a disaster and means you could get close to a full workday out of this device without needing to plug it in. But this is an area where we expect more from premium competitors. The XPS and the Air both averaged over eight hours in our testing, and the AMD-powered ZenBook 13 (which is powering an OLED screen) broke 11 hours with my workload.

Things also got toasty. The center of the keyboard was so hot during my gaming runs that it was slightly uncomfortable to touch, and the bottom of the chassis was also blistering enough under heavy workloads that I couldn’t use the ThinkBook on my lap. The fans got quite loud during some of these periods — to the point where I ended up restarting the computer a few times to get them to quiet down. (They were quiet most of the time if I was just working in a few tabs.) The CPU did stay fairly cool. I saw one spike up to 94 degrees (Celsius) during my Tomb Raider run, but things otherwise stayed below the mid-70s.

Overall, though, the best thing about the ThinkBook 13S is that it’s a good deal. Business buyers looking for ThinkPad-level performance and software without ThinkPad pricing will probably find the ThinkBook a solid option. While nothing about it is really spectacular, it’s certainly unusual to see the ThinkBook’s screen resolution at a sub-$1,000 price, and its performance will be more than adequate for most office tasks. The generous port selection, 16:10 aspect ratio, physical webcam shutter, and clear audio are certainly icing on the cake.

There are areas where the cracks show, of course. Battery life is underwhelming for the category, and the screen’s brightness is disappointing. You do get advantages, particularly when it comes to look and build quality, from ultraportables that are $200–$300 more. But there are certainly customers — especially in the business sphere, I imagine — who care more about having a portable, affordable device with decent connectivity than they do about having one that’s beautiful. For those people, this should be a fine choice.