Nothing Ear 1 earbuds review: almost something

Share All sharing options for: Nothing Ear 1 earbuds review: almost something

There’s a lot riding on the Ear 1 wireless earbuds, which are the first product to come from Nothing — a new company created by OnePlus co-founder Carl Pei. Backed with investment from GV, Tony Fadell, and influential creators like Casey Neistat, Nothing is aiming to build out an entire family of products that follow the design ethos debuting with the Ear 1. Transparency is at the heart of that: the Ear 1s have a clear “stem” that lets you peer at their internal components, and the unconventional charging case has a transparent lid to keep the buds in view at all times.

Pei has said his motivation for starting Nothing was a consumer tech industry that felt stale, unimaginative, and awash in gadgets that all feel very same-y. I don’t really buy into that viewpoint; sure, AirPods clones are everywhere, but the best earbuds from Samsung, Sony, Google, Amazon, and other big players are all visually distinct. Regardless, Nothing doesn’t see itself as “an audio company,” according to Pei, but the booming true wireless earbuds market seemed like an advantageous place to start. He’s also aiming to capture the same price-to-performance magic that was associated with OnePlus in its early days.

Our review of Nothing Ear 1 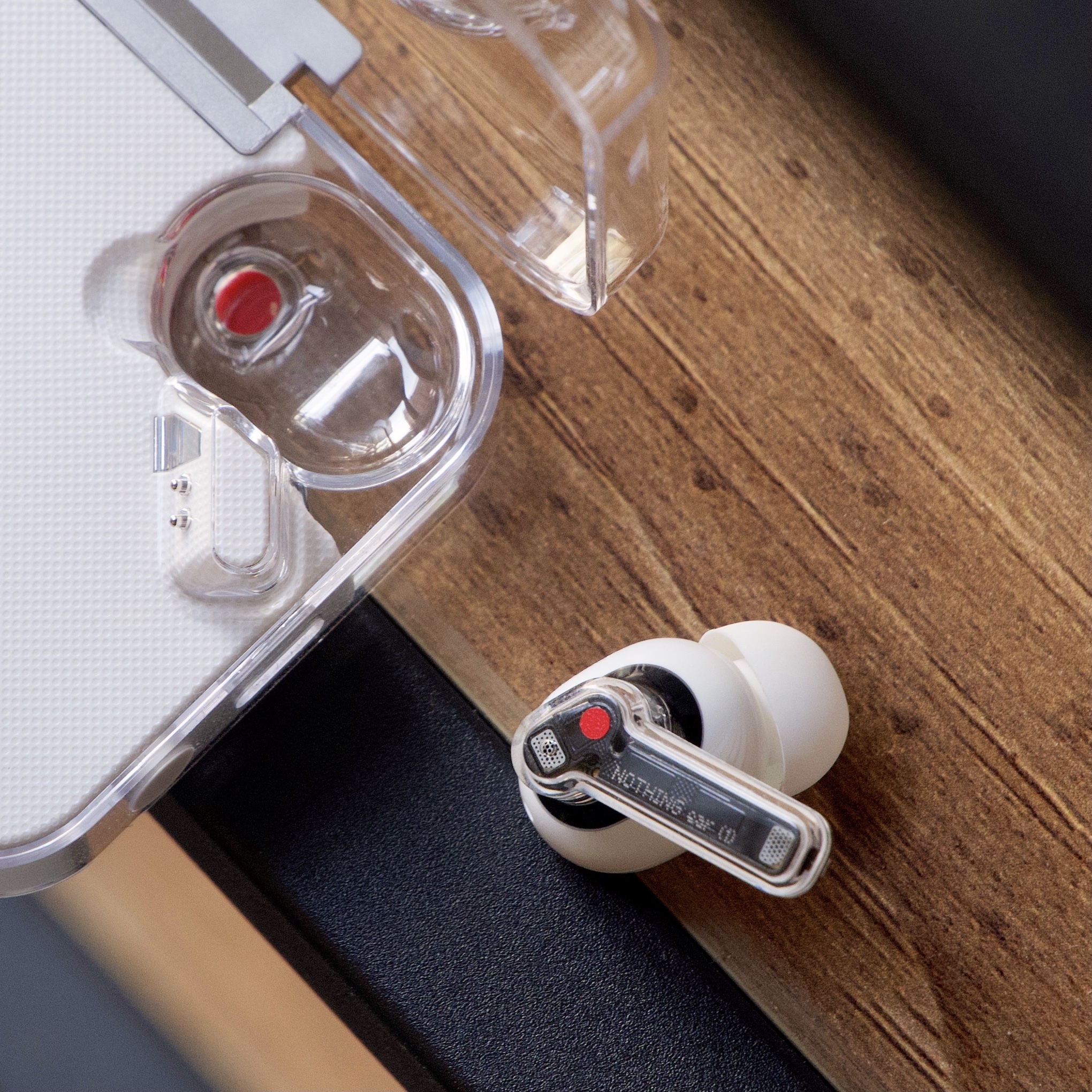 At $99, the Ear 1s include active noise cancellation, wireless charging, IPX4 water resistance, and smaller conveniences like in-ear detection — features that cost anywhere from $150 to $300 from Nothing’s big brand competitors. Their sound has been tuned by Teenage Engineering, a company well versed in audio electronics. They’ll go on sale widely starting August 17th, but you can grab a pair early from Nothing’s website on July 31st.

Like all transparent tech, the Ear 1s are fun to examine up close. On the outward-facing part of the stem, you can see the voice / ANC microphones, touch sensors, and a dot — red (right) or white (left) — to indicate which ear that bud is for. On the side facing your ear, there’s some circuitry, magnets, and the pins where the earbuds connect to the charging case.

Nothing says it was so obsessive over small details (like polishing the magnets) that some manufacturing plants turned the startup away. Finding the right glue to bond the two sides of transparent casing together without leaving any ugly remnants behind was also apparently quite a challenge.

The Ear 1s definitely look cool, but do they come off as radically different? I’m not seeing it. If the clear stem were opaque white instead, these earbuds would look just like Apple’s AirPods Pro or any number of competitors. Nothing’s early concept images showed a more unorthodox design, but the final product looks mostly normal with a dash of unique style — and maybe that’ll be enough to sell some people on them. Not reinventing the wheel makes for good comfort, at least. Three sizes of silicone tips come in the box, and I found that the Ear 1s have a similar in-ear feel to the AirPods Pro. They fit snugly, feel airy light (each earbud is 4.7 grams), and didn’t come loose during runs or while I was eating, which are two scenarios where true wireless buds sometimes get dislodged.

The charging case is where Nothing definitely gets more out there with design. It’s a squished-down square with rounded corners that opens and closes with satisfying spring tension. There’s a USB-C port for wired charging, and you also get Qi wireless charging; that’s always nice to see at this price. But for all the visual flair, it feels like I’m doing more work to seat the Ear 1s back in their case compared with other earbuds I’ve got around. The magnetic hold isn’t particularly strong, and laying the earbuds flat instead of plopping them into deep charging cradles takes more direct attention. The big dimple in the top of the case helps keep the earbuds in place, with a side effect of turning the case into a fun thing to fidget with and twirl around in your fingers. Still, I think Nothing could’ve come up with something more efficient and compact. This case is form over function and obviously intended to showcase Nothing’s transparent aesthetic. Just don’t expect it to stay pristine: my review unit has already collected scratches on the case’s bottom, and it’s only a matter of time before the top picks up some, too.

In terms of sound, the Ear 1s and their 11.6-millimeter drivers don’t pull off any huge upsets against more premium competition. But they also don’t sound bad or “budget.” They’ve just got some weaknesses that earbud enthusiasts will pick up on. The treble and high end — particularly on acoustic-driven tracks — can occasionally come off as excessively sparkly. I listened through John Mayer’s 1980s-influenced Sob Rock and while Nothing’s earbuds punched slightly above what I’d expect for $99 and had good clarity and a nice thump-y bass riding beneath everything, their warmth and detail don’t measure up to earbuds in the $200-300 range. But they’re still an enjoyable listen in many cases, which came through when I switched over to “Stop Making This Hurt” by Bleachers. The Ear 1s presented well with good stereo separation and nothing sounding muddled.

Nothing’s companion mobile app is available for both Android and iOS and has simple EQ adjustments for “more treble,” “more bass,” and “voice,” but you can’t take full control over the sliders yourself. You might find yourself turning to that bass boost now and then. Nothing has said it and Teenage Engineering aimed for a natural, balanced sound signature, but don’t confuse that with flat or colorless. The earbuds support AAC and SBC Bluetooth codecs.

Noise cancellation is… passable. On the “max” setting, it could eliminate low-frequency hums inside my local coffee shop, but I never really forgot about my surroundings. Overall noise isolation was solid thanks to the good seal I got from the ear tips, and I’d reach for these before the $99 Pixel Buds A-Series, which require me to crank the volume to overcome nearby noise. But Nothing isn’t on the same level as the similarly priced Amazon’s Echo Buds 2 when it comes to noise cancellation — not a surprise since this is the company’s first swing at it. Transparency mode is adequate, but doesn’t match the natural feel of the Echo Buds or Apple’s AirPods Pro. Nothing does include some nice tricks; if you take one earbud out, the other will switch into transparency mode until both are back in your ears. And they’ve got auto-pause / resume when an earbud is removed, as well.

Despite having three microphones and algorithms meant to help isolate your voice from background noise, the Ear 1s were a disappointment for voice calls. My voice came through muddled and warbly even in a quiet room when recording to voice memos, and people I called had difficulty hearing me clearly.

Nothing says the Ear 1s can last for four hours of continuous playback with ANC on, and the case has enough for 24 more hours. If you leave ANC off, those numbers increase to 5.7 hours and 34 hours, respectively. The battery estimates for listening time have seemed on point in my tests so far. The earbuds use tap controls for most functions: you tap twice to play / pause, three times to skip forward or go back to the previous song (depending on side), hold to toggle NC modes, and so on. But there’s also a swiping gesture up or down the stem to adjust volume, which has worked reliably and feels intuitive.

Nothing is still working on the Ear 1s as they approach release. In my time testing them, I’ve certainly encountered bugs and sporadic issues.

AGREE TO CONTINUE: NOTHING EAR 1 EARBUDS

The Nothing Ear 1 earbuds can be paired over Bluetooth and used without any software agreements. But by using the mobile app to adjust settings, you agree to:

The app also includes an opt-in toggle to join the Nothing “improvement program,” where you can provide feedback and share usage data with the company.

The final tally is no mandatory agreements, but two important optional ones.

Nothing has already pushed out a couple firmware updates during my review period, and I’d expect more before the Ear 1s arrive to buyers. But these are my impressions as of the company’s late-July review embargo; I’ll update to mention any changes or improvements when the earbuds ship in August.

With their full potential unrealized and performance still on the buggy side, it’s difficult to conclude whether the Ear 1s are putting Nothing on the right track as a new consumer tech brand. These earbuds offer an ambitious bundle of features for $99, and they’re inevitably going to get buzz and attention thanks to their transparent design (even if they resemble AirPods in other ways) and presence in swanky fashion storefronts like Kith. The Ear 1s are the new hypebeast earbuds and have a fun air of freshness. But right now, their individual parts — sound quality, noise cancellation, etc. — fall short of excellence and leave plenty of reason for sticking with one of those “boring” established players.