Much more utility than your average controller

Turtle Beach is known primarily for making gaming headsets, but it recently launched its first controller called the Recon for the Xbox Series X / S, Xbox One, and PC. It’s a $59.99 wired model available in black or white that doesn’t feel all that different from Microsoft’s wireless controller. What little it does change design-wise is ultimately successful, and I’ll get into all of that shortly. But I want to focus first on the Recon’s killer feature: customization.

When you plug headphones into its 3.5mm headphone jack, the panel of buttons at the top of the Recon can be used to make a host of changes to your game and chat audio as well as your microphone. You can choose between four equalizer presets that range from focusing more on bass to a treble-dominated sound. Mic monitoring can be adjusted, and you can opt to let more of your voice come through in your headphones if you want, should they have a built-in mic, or you can mute the mic altogether. 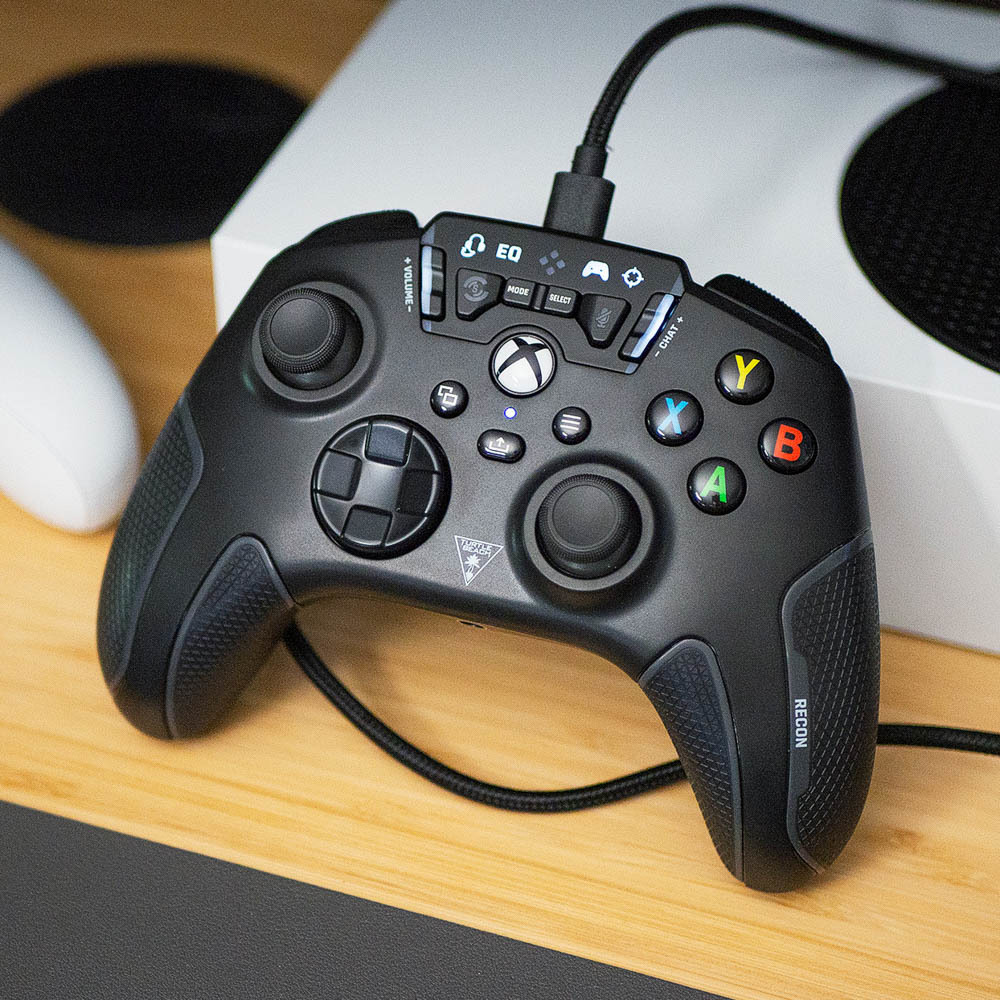 The Recon also lets you adjust the game audio and the chat volume independently with two rockers, one at each side. (Note: the chat mix function works on Xbox consoles only, not on PCs.) Turtle Beach even put in a “Superhuman Hearing” button — a signature feature from its headset lineup that emphasizes easy-to-miss sounds like footsteps, doors opening, and other key sounds that might help clue you in ahead of the competition.

Essentially, the Recon brings must-have headset features to a controller, lowering the barrier to entry for how many gaming accessories you need. That’s great and all, but you’ll need patience and practice to conquer the inelegant button layout that enables these features, and the others mentioned below. Everything works as intended, but you’ll need to keep the instruction manual within reach.

In addition to tweaking the sound, the aforementioned buttons also let you make several adjustments to how the controller, well, controls. The Recon lets you map any function from the controller (aside from analog stick movement) to one of two macro buttons located behind the controller grips. The last feature is called Pro-Aim, which lets you toggle between four levels of slowed-down sensitivity for the right-hand stick. When you activate the setting and toggle through the options to find your preferred level of sensitivity, holding down the rear right macro button will slow the stick’s movement speed accordingly, making it potentially easier to line up your shots compared. It works fantastically, though it’s programmed to work only on the right rear button, so it’ll overwrite a custom function if you’ve assigned one to the same button.

Rear buttons aside, the Recon feels similar to the Microsoft Xbox controller that debuted alongside the Xbox Series X / S consoles. This wired version has rubber-coated grips, and I really like that its shoulder buttons are completely covered in little raised dots that make them less slippery. (Microsoft’s controller has these, too, but they cover a smaller surface area on the buttons.) Turtle Beach includes a lengthy 10-foot braided cable, so it should be able to work with most entertainment center arrangements.

Compared again to Microsoft’s latest controller, the Recon controller’s face buttons and triggers require a similar amount of force to press. The Recon’s sticks require a bit more force to click in. There’s also an eight-way d-pad that will feel like a big improvement if you’re still using the older Xbox wireless controller made during the Xbox One days. Otherwise, you won’t notice much difference if you’ve used Microsoft’s new controller.

One final note: this controller supports rumble on Xbox consoles, but PC support for rumble is very spotty. The Recon worked just fine on my PC with Death Stranding and Streets of Rage 4, but other titles that I tried didn’t provide rumble feedback.

If you already have a wireless controller and a wireless headset that you like, the Recon controller isn’t really for you. It’s meant more for people who already own a set of headphones that they like and want to extend its capabilities without spending more than they need to. Despite Turtle Beach’s less-than-perfect execution with how to access its many customization features, I’m still glad that those features exist in a $59.99 controller.