A dream for workers and IT departments alike

Dell’s Latitude line is the answer to Lenovo’s ThinkPad business notebooks, some of the best laptops on the market. Latitudes aren’t much to look at, but they come packed with security features. There’s a proximity sensor that automatically locks and unlocks the screen. There’s a physical webcam shutter that moves on its own. There’s the Dell Optimizer program which (in theory) learns your behavior over time and tailors everything from audio quality to charging speed accordingly. Most significantly, the Latitude line supports Intel’s vPro, a hardware and firmware platform that includes a number of security features and makes it easier for IT departments to manage devices remotely.

The Latitude 9420 replaces last year’s Latitude 9410, and the two products look pretty darn similar with a thin, light, CNC-aluminum build. But with the combination of vPro and Intel’s prestigious Evo standards, the 9420 offers a compelling package for business users who are willing to pay a premium.

Our review of Dell Latitude 9420 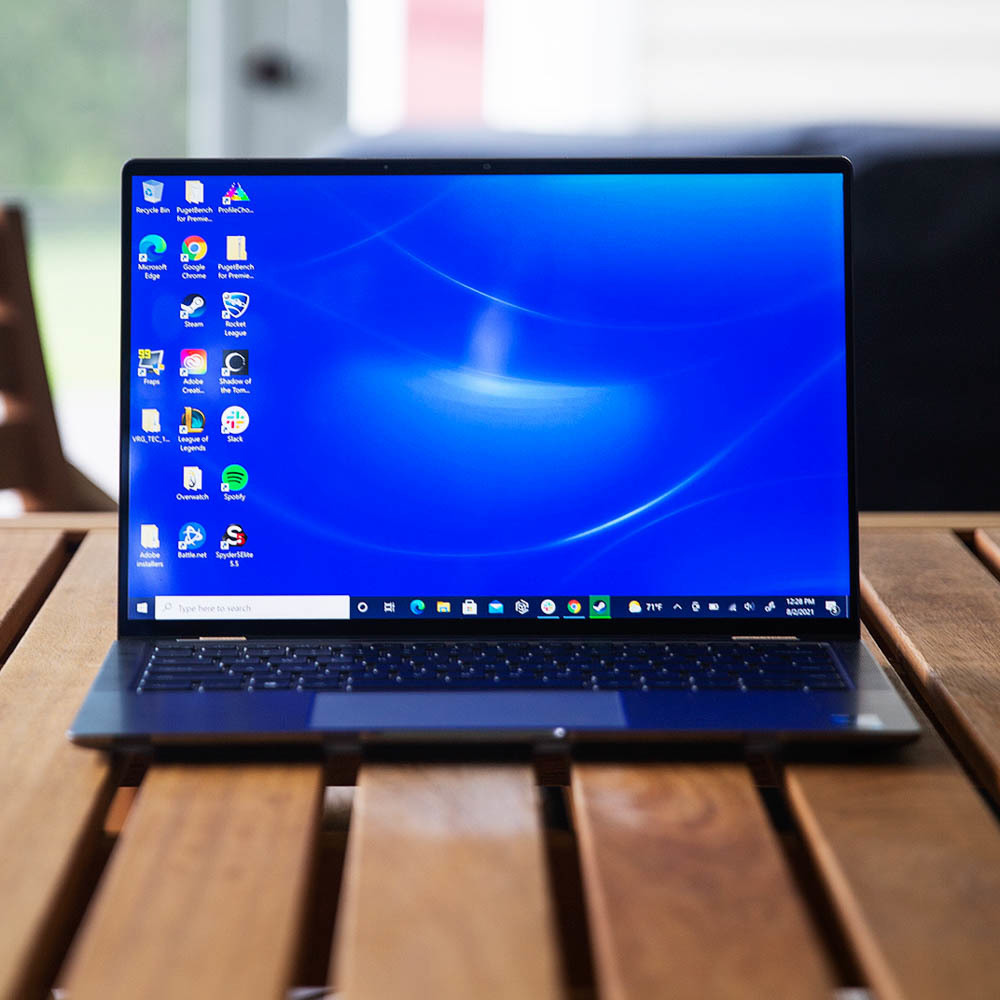 But if money’s no object for you or your company, the Latitude offers a suite of benefits — particularly for folks who work on remote teams. New to this Latitude model is the SafeShutter, an automated physical camera cover. It covers the webcam whenever you’re not using it, and disappears when you pull up Zoom, Microsoft Teams, or anything else that needs to access the camera. This worked very well and should be convenient for folks who are in and out of virtual meetings all day. (There’s also a physical on / off switch on the keyboard.)

The camera itself — a 3.5mm shooter that supports Windows Hello — is actually good, delivering one of the best pictures I’ve ever seen from a laptop’s webcam. The speakers (two upward-firing and two downward-firing) deliver average volume but clear audio with booming bass and percussion. The four microphones had no trouble picking up my voice, and they succeeded in making me audible above my loud typing and some assorted background noise. Dell also says that Optimizer will direct your bandwidth to videoconferencing applications while they’re in use. It’s a good package for meetings overall.

Another highlight is the 16:10 aspect ratio, which gives the QHD screen extra vertical space. Less scrolling than a typical 16:9 screen, more room for tabs and apps — all good things. You can configure the 9420 with 5G or 4G, and Dell says that Optimizer automatically finds the strongest Wi-Fi access points. And you get a fine port selection, including an HDMI 2.0, two USB-C ports that support Thunderbolt 4, a uSD4.0 memory card reader, a combination audio jack, a wedge lock slot, and a USB 3.2 Gen 1 Type-A.

The only real issue I ran into was with the trackpad. It was unresponsive compared to most laptop trackpads — I felt like I was coaxing the cursor along at times, and it didn’t always go quite where I wanted it to. The device sometimes thought I was clicking when I wasn’t clicking, resulting in accidentally closing windows or leaving my active screen all the time.

I told Dell about this, and the complaint was, refreshingly, well-taken. The company first sent me a replacement unit, which had the same issues. It then told me its engineers had figured out the problem with the first two units and fixed it. I was then sent a third unit, on which the trackpad worked just fine. Thanks, Dell! Let’s hope that issue is gone for good.

Dell says customers who got a unit with a finnicky touchpad should contact the company’s tech support.

The biggest upgrade over previous Latitudes comes on the inside. Dell claims that the new 11th Gen vPro processors deliver 66 percent more CPU power than their 10th Gen counterparts did.

The 9420 is something of a milestone for the business laptop market — it’s the first vPro device to also be verified through Intel’s Evo program, which certifies that a device meets Intel’s various requirements to be a top competitor in the consumer space including instant wake, fast charging, and responsive performance.

Dell and Intel are pushing this combination as a way to please IT departments while also competing with the best consumer laptops on performance, battery life, and other standard productivity metrics. “We’re used to mobile devices that project a certain confidence, style, status, that’s an important part of what Evo also brings,” Intel VP and GM of mobile innovation Josh Newman told me in an interview. “vPro, it’s the performance and security that IT wants.”

That’s especially important as remote and hybrid work blurs the line between business and personal laptops for some customers. “This environment that we’re all living in, it’s so hybrid. You really, from an IT perspective, cannot predict where your end users are going to be, and so security becomes really important, and that’s where vPro comes into play,” added Meghana Patwardhan, Dell’s VP and GM of mainstream commercial PCs.

To start using the Dell Latitude 9420, you’ll need to agree to the following:

That’s five mandatory agreements and 10 optional ones to use the Dell Latitude 9420.

I didn’t experience any lag or sluggishness

When it came to the tasks that many business laptops are most often used for these days — videoconferencing, word processing, photo editing, research, and other tasks in Chrome — the Latitude performed quite well. I didn’t experience any lag or sluggishness, even when I was doing photo work on top of a dozen Chrome tabs with Spotify streaming. The fans did sometimes get quite loud, though you can switch to a Quiet cooling profile in Dell’s Power Manager.

For more intense workloads, the Latitude is a solid contender. The 9420 took eight minutes and 16 seconds to export a five-minute, 33-second 4K video in Adobe Premiere Pro. That beats last year’s Latitude 9510, with a 10th Gen vPro Core i7, which took just over 28 minutes. That’s quite a delta. For a more modern comparison, both the XPS 13 and the XPS 13 2-in-1 (both with a Core i7-1165G7) took over 10 minutes to complete the task.

Updates to Premiere Pro can impact export time, so a better apples-to-apples comparison is the Puget Systems benchmark for Premiere Pro, which tests live playback and export performance at both 4K and 8K. The Latitude scored a 261, which also beats the most recent XPS 13 and the XPS 13 2-in-1. (These results are mostly for the sake of performance comparison — the Latitude wouldn’t be the best choice for anyone regularly working with 4K and 8K video.)

While the 9420 wouldn’t be recommended as a primary gaming device, some gaming is certainly possible. Despite its business focus, the laptop beat some of the best consumer thin and light laptops on a few titles. It averaged 55fps on Overwatch’s Ultra settings at native resolution and 58fps at 1920 x 1200, where the XPS 13 averaged 48fps. We saw 22fps on Shadow of the Tomb Raider at native resolution and 35fps at 1920 x 1200, which also beats the XPS. (This was on the title’s lowest possible settings, of course, so it wouldn’t be the most fun to play on this machine.)

The Latitude did not do as well on lighter titles. It averaged 95fps on Rocket League’s maximum settings and 157fps on League of Legends, which are both worse than what we saw from the XPS 13. The Latitude also lost to the XPS 13 2-in-1, which performed slightly better than its clamshell counterpart in our testing, on every title here. That device averaged a whopping 226fps on League of Legends. (Of course, you’ll only see a maximum of 60fps from any of these devices.)

It’s interesting that the Latitude is beating these consumer laptops in Premiere Pro tasks, but losing in other graphic benchmarks. I’ve asked Dell if it has any insight here and will update this review if we make any headway, but my guess is that Dell’s software is better optimized for production workloads than it is for games (which makes sense for a business laptop). My other takeaway here is that even where the Latitude is outperforming the best consumer laptops, it’s not by a ton — which emphasizes how much extra you’re paying for vPro and the Latitude’s business features.

Cooling was a mixed bag. During both Premiere Pro tests, the CPU spent a worrying amount of time around 99 degrees Celsius. It was much better controlled during gaming, staying between the mid 60s and high 70s. That does indicate that the Latitude may be hitting a cooling wall when it comes to video work. (The keyboard and palm rests did remain comfortable, on the plus side.)

Finally, battery life has been a strength of Latitudes in the past but was a mixed bag here. The device averaged five hours and 41 minutes of continuous use (at around 200 nits of brightness). But the stamina seemed to be heavily influenced by certain settings. When I ran a trial on the Better Performance Windows profile, I got under two hours of juice. I averaged over 10 hours when I ran trials on the Windows Battery Saver profile and Dell’s Quiet cooling profile with Dell’s Battery Extender on, Intel’s power savings on, and the AI features in Dell Optimizer (including the proximity sensor) off.

Dell thinks that battery life was a fluke — on a replacement unit, I saw a better average of around seven hours. That’s still not close to the exceptional results we’ve seen from previous Latitudes, but it’s much closer to what we expect from laptops at this price point. I’d still recommend switching on all the battery-saving stuff whenever you need an all-day lifespan, just in case.

I have very few complaints about this Latitude. Even things I usually complain about on laptops — the webcam and the audio — were pretty good here. The 9420 is a solid ThinkPad competitor, and easily one of the best business convertibles you can buy. It can accommodate photo and video work, and it can even run lighter games on the side.

But, of course, there’s the price. Even the base model’s price tag will be out of reach for many people. And if you’re a freelancer or small-business worker, or you’re just looking for a personal device, you can get the same build quality, a 16:10 touchscreen, and performance that’s fairly similar (and even better if you’re gaming) from the XPS 13 2-in-1, which is over $1,000 cheaper.

As Dell’s and Intel’s representatives have noted, this laptop is really for folks who need both the vPro platform and the Evo platform — the best business features and the best consumer features in one product. If you are in that group, the Latitude 9420 is a solid package that asks very few compromises. It’s premium technology for a premium price.

Update September 17th, 3:11PM ET: Added trackpad observations and battery life results from a third replacement unit. Updated the score to an 8.5 in light of the better performing trackpad.