AMD can now compete with Nvidia at the entry level

AMD has returned to challenge Nvidia with its entry-level RX 6600 XT. This $379 (on paper at least) card is built on the same RDNA 2 architecture that AMD is using for its high-end cards, but it’s designed to boost 1080p gaming instead of reaching the heights of 4K gaming.

Nearly 70 percent of PC gaming on Steam is still at 1080p, so if you’re one of the millions enjoying 1080p gaming with an older card like the GeForce GTX 1060, this latest RX 6600 XT might be a tempting upgrade when it launches on August 11th.

But AMD’s latest RDNA 2 cards have barely registered on Valve’s latest Steam hardware survey, suggesting that Nvidia is producing far more RTX cards compared to AMD. So even if AMD can beat Nvidia at the entry level, it needs to make cards that people can actually buy for it to matter. 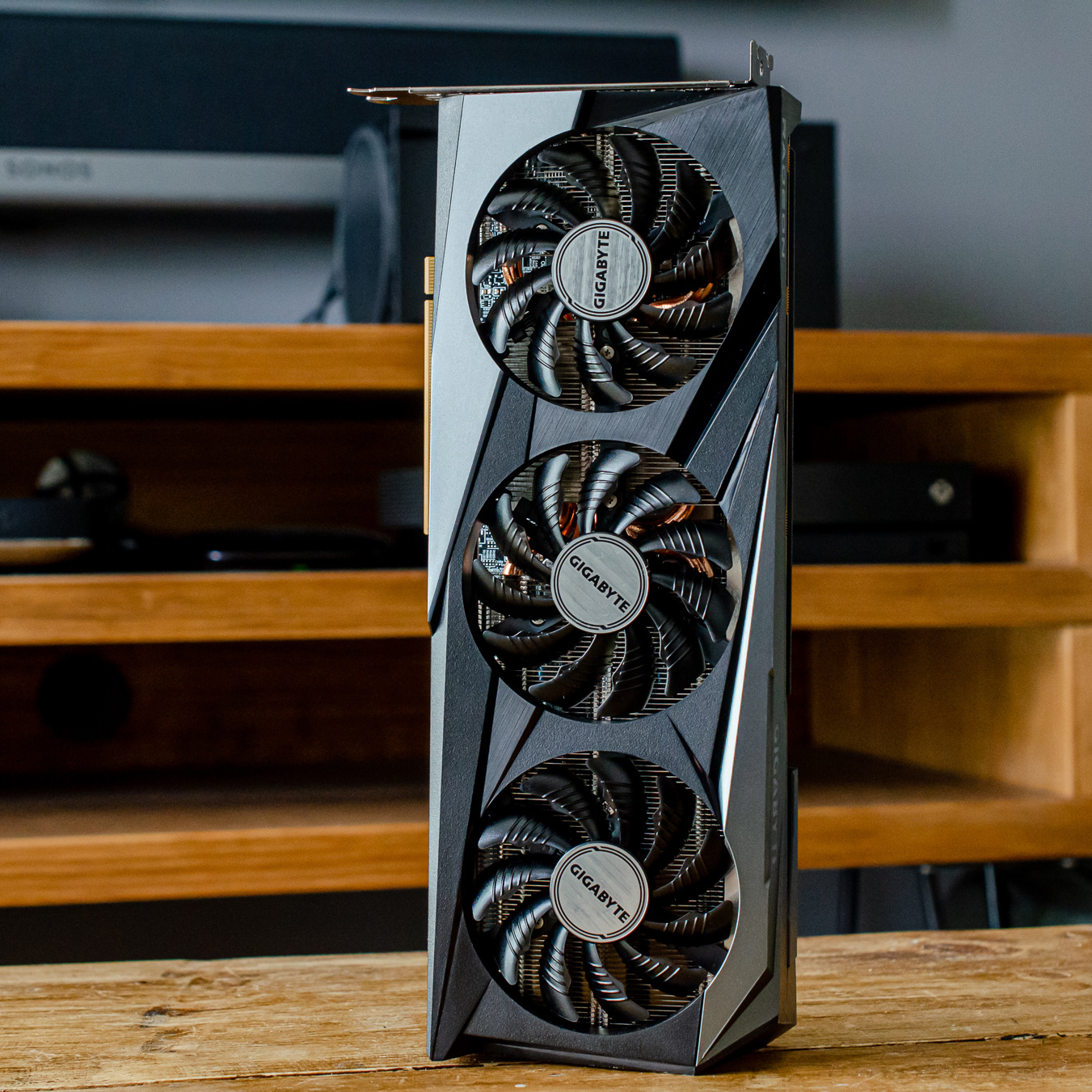 AMD isn’t creating its own RX 6600 XT, so it’s relying on board partners like ASRock, Asus, Biostar, Gigabyte, MSI, PowerColor, Sapphire, XFX, and Yeston to produce cards. I’ve been testing Gigabyte’s version of the RX 6600 XT.

This particular RX 6600 XT has three fans, with the fan in the middle spinning in an opposite direction to help with cooling. There’s a metal back plate that includes a cutout for the air to dissipate from the heatsink below.

As the RX 6600 XT only draws around 160W of power, it only needs a single eight-pin PCIe power connector. The recommended minimum power supply is 500W, so this is ideal for those not wanting to upgrade their entire systems.

At more than 11 inches long, Gigabyte’s version is a surprisingly big card for an entry-level GPU, but it’s lightweight to hold so it shouldn’t put any strain on your motherboard. The card is also a traditional dual-slot width, despite its bulky look.

Gigabyte has equipped its RX 6600 XT with an RGB light system that lights up its logo on the side of the GPU. By default, this will cycle through a rainbow of colors, but with 16.7 million color options and the ability to sync to other Aorus devices, there are plenty of options for customizing this.

At the rear of the RX 6600 XT there are two HDMI 2.1 ports and two DisplayPort 1.4 ports. The card also supports PCI Express 4.0 and includes 8GB of GDDR6 memory.

I’ve been testing the RX 6600 XT with Intel’s latest Core i9 processor. For both 1080p and 1440p tests, I’ve paired this GPU with a 32-inch Samsung Odyssey G7 monitor. This monitor supports refresh rates at up to 240Hz, as well as AMD’s FreeSync support.

I wasn’t able to test the RX 6600 XT directly against Nvidia’s RTX 3060 as I don’t own one of Nvidia’s entry-level cards, but you can see how well the RTX 3060 performed in my colleague Sean Hollister’s review. I’ve been testing the RX 6600 XT against AMD’s RX 6700 XT to see just how much performance you get for $100 less.

I tested a variety of AAA titles, including Microsoft Flight Simulator, Gears 5, Assassin’s Creed: Valhalla, and Control. All games were tested at high or ultra settings on the RX 6600 XT with resizable BAR enabled, and most comfortably exceeded 60fps at 1080p.

Death Stranding topped out at an impressive 150fps on average, while Gears 5 managed 105fps at ultra settings. Even Microsoft Flight Simulator nearly managed 60fps, thanks to a recent update that has greatly improved how the game runs on all hardware.

“We are aware of some lingering performance issues when DXR is enabled at max settings in Watch Dogs: Legion,” says an AMD spokesperson. “In our findings, reducing quality settings with DXR enabled delivers a better user experience.”

Control seemed to run well with ray tracing enabled, but you’re cutting performance in half if you want this visual quality and there’s no DLSS, or FSR in AMD speak, to make up for it yet. Metro Exodus was practically unplayable with ray tracing and settings maxed out, averaging 24fps.

So this isn’t a ray tracing card, but for an entry-level budget GPU, I wasn’t really expecting it to be. For everything else, it performs well for its price point at 1080p. When you compare it to the RX 6700 XT, with its $100 price premium, you’ll get around 20 percent more performance if you’re willing to pay extra.

Where things get really interesting is when you consider Nvidia’s RTX 3060 Ti. At a $20 price premium (in theory at least) over AMD’s RX 6600 XT, you’ll get between 10 percent and 25 percent better performance in the majority of games. There are some rare exceptions where games like Assassin’s Creed Valhalla are clearly optimized for AMD, but it’s certainly worth paying extra if pricing and availability is realistic.

While AMD might be marketing the RX 6600 XT at 1080p, lots of PC gamers are still considering the move to 1440p, even at the entry-level side of the market. I also tested the RX 6600 XT at 1440p to see if it could stretch to this resolution, and to be honest... the results were better than I expected.

Gears 5 manages 70fps on average at ultra 1440p settings, and Assassin’s Creed: Valhalla hits 62fps. I was surprised that Control didn’t manage better during my tests at 1440p, though. While it hits 60fps on average, it dropped to the 30fps range at more demanding parts of the game. If you enable ray tracing in Control at 1440p, it makes the game really unplayable in lots of spots.

AMD’s RX 6700 XT manages 81fps on average in Control; that’s a surprising 42 percent performance jump over the RX 6600 XT. Elsewhere, the performance gap ranges from Death Stranding running at 21 percent better on the 6700 over the 6600, up to Assassin’s Creed: Valhalla with a 32 percent gap.

Still, Fortnite managed 75fps on average with everything maxed out, and Death Stranding got all the way up to 107fps during my tests. There’s certainly room here to play at 1440p with this card, but you’ll likely need to adjust image quality to get there in a lot of titles. Metro Exodus was unplayable in lots of parts of the game at extreme settings and 1440p, and Watch Dogs: Legion crawled along at just 3fps with ray tracing enabled (clearly due to some driver issues).

I wouldn’t recommend this card for 1440p gaming, nor is it really designed for it. As more demanding games arrive this year and next, you’ll undoubtedly need to keep adjusting settings down if you really want to pair an RX 6600 XT with a 1440p monitor.

If you’re willing to stretch another $20, if you can actually get a card at retail price, then Nvidia’s RTX 3060 Ti excels at 1440p in comparison. There’s a decent gap of 25 percent or more in most games, and frame rates are closer to 60fps or above in the majority of games.

AMD’s new FidelityFX Super Resolution (FSR) could help with the longevity of the RX 6600 XT either way. Much like Nvidia’s Deep Learning Super Sampling (DLSS), AMD’s FSR aims to upscale games from a lower resolution to provide smoother frame rates without a noticeable compromise in image quality.

It’s really early days for FSR, so none of the games we’ve been testing for this review have FSR support. FSR is off to a promising early start in the games that do support it, offering higher frame rates at the flick of a switch. But you shouldn’t necessarily expect it to help at 1080p: like Nvidia’s DLSS, the machine-learning upscaling technique seems to offer worse image quality at lower resolutions. If anything, FSR could help push the RX 6600 XT into 1440p territory, but only if AMD manages to get widespread support for its technology into games.

AMD will also have to match that widespread support for FSR with more widespread availability of its GPUs. As I mentioned earlier, the latest Steam hardware survey suggests that AMD’s struggling to produce enough GPUs, and while it’s not the most accurate way of tracking GPU sales, it does show how well Nvidia’s RTX 30-series cards are making their way into PC gamers’ hands despite a global chip shortage.

With the exception of ray tracing performance, AMD is now competing with Nvidia both in entry-level GPUs and at the $599 price point. There are plenty of gaps elsewhere in AMD’s lineup, but the $379 RX 6600 XT fills an interesting one between the $329 RTX 3060 and the $399 RTX 3060 Ti. If you’re able to spend the extra $20 on an RTX 3060 Ti (if it’s even available at that price) then it will outperform AMD’s entry-level card in the majority of games. AMD still packs a bunch at the entry level here, but only if its board partners can create enough cards to make the RX 6600 XT a potential option for those on a budget.