Samsung Galaxy A42 5G review: stuck in the middle

A midrange phone with a big screen, huge battery, and all kinds of 5G connectivity

Share All sharing options for: Samsung Galaxy A42 5G review: stuck in the middle

The Samsung Galaxy A42 5G is a thoroughly decent midrange phone that doesn’t really need to exist.

Taking it at face value, it’s fairly priced at $400 with a big 6.6-inch OLED screen, generous 5,000mAh battery, and a healthy support policy that will see it receiving security updates through the next few years. That’s a pretty good deal.

In the context of Samsung’s Galaxy A lineup, it’s situated between the Galaxy A52 5G and the A32 5G, two very good options in their own price brackets. The $499 A52 5G offers a few more high-end bells and whistles than the A42 5G, like a fast refresh screen and an IP67 waterproof rating. At $279, the more basic A32 5G includes an LCD rather than OLED.

Our review of Samsung Galaxy A42 5G 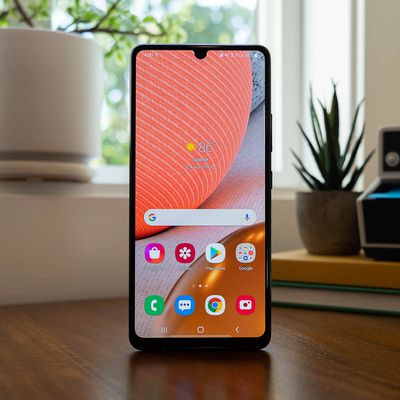 But if you’re shopping for a new device with Verizon, you won’t see either the A52 5G or the A32 5G on the retailer’s shelves (digital or otherwise). Instead, you’ll only find the A42 5G, thanks to one feature it has and the others don’t: mmWave 5G support. Until recently, this was a feature reserved for premium phones, and the A42 5G is one of the least expensive devices that can connect with the network. Verizon in particular has been pushing this super-fast flavor of 5G hard over the past couple of years. Despite its efforts, mmWave is still scarce and highly range-limited, but the carrier is still heavily biasing its stock toward devices that support it.

That’s why the A42 5G exists, at least in the US, but I’m not convinced that’s a good enough reason for anyone besides Verizon.

The Galaxy A42 5G offers a big 6.6-inch 720p OLED screen. That’s not a lot of resolution stretched across a fairly big panel, and it shows — if you look closely at images you’ll see some pixelation. The screen gets bright enough for indoor use, but I had a hard time seeing it outside even with brightness maxed out. The OLED panel shows nice contrast compared to an LCD (i.e., what you’ll get in a less expensive model like the A32 5G), but otherwise the display is a little underwhelming.

The A42 5G offers an in-display fingerprint sensor for biometric unlocking and it’s one of the better ones I’ve come across in this budget-to-midrange class — it’s responsive and only occasionally fussy. Budget phones often have sensors that are less precise and require additional scans more frequently, and that is a real pain considering how many times we unlock our devices every day.

The screen gets bright enough for indoor use, but I had a hard time seeing it outside

Battery life is excellent thanks to a large 5,000mAh cell — most days I only drained it to 70 percent by bedtime, but even a day with heavy use that included a Zoom call on cellular data only brought it down around 50 percent. A power user would definitely get a full day and a little extra from it, and with moderate use it can easily be stretched to two days on a charge.

Overall performance from the A42 5G’s Snapdragon 750 processor and 4GB of RAM (there’s a healthy 128GB of storage, too, and it’s expandable via MicroSD) is good for day-to-day tasks. The only slowness I noticed was a little bit of lag starting the camera app, and slight delays using more processing-intensive camera features like portrait mode.

Samsung’s current implementation of Android is a little more cluttered than we prefer, and activating it on Verizon’s network means you’ll end up with even more pre-downloaded apps on top of that. It’s a lot. There’s some sort of game featuring a cartoon bear on the phone I’ve been using for the past few weeks, and I do not care for it but I haven’t been able to summon the energy to uninstall it either.

In good light outdoors, the Galaxy A42 5G takes vibrant, detailed photos. Like other Samsung devices before it, the A42 produces colors that lean toward oversaturated, which can be distracting if a more natural look is your thing. Portrait mode photos are convincing enough, and the camera can sometimes struggle deciding on white balance and exposure in mixed lighting situations.

Photos in very low light show a lot of smeared detail thanks to noise reduction, but outside of the Pixel phones in this price bracket, that’s not something we’d expect a midrange device to excel at. All told, the A42 5G’s photo capabilities are on par with its class. Spending a bit more on the A52 5G will get you a stabilized main camera that will get more sharp shots in dim lighting and slightly better low-light performance in general, but in the $400 range the A42 measures up well against most of its peers.

The Galaxy A42 5G is a fine phone for $400, and if you’re committed to buying from Verizon, it’s one of the better options at that price. But if you’re able to buy an unlocked phone or you aren’t on Verizon, then there are other options, including in Samsung’s own midrange lineup, that are well worth your consideration. Unless you live in an area with good mmWave coverage and spend a lot of your time outside where the signal can actually be reached, the A42 5G’s unique feature is of limited value.

If you’d like to save a little money, the A32 5G is a viable alternative for $280. You’ll get the same security support longevity as the A42 5G along with similar photo capabilities, a huge battery, and 5G support that’s ready for upcoming improvements to Verizon’s and AT&T’s networks. Its processor is a little less robust and the LCD isn’t as nice to look at as the A42 5G’s OLED, but if these things aren’t priorities then you might as well save a little and go for the less expensive device.

don’t get too excited about mmWave

If you think you’ll want a little more than the A42 5G has to offer, then the $500 A52 5G is a good step-up option with a bit of a better camera, a great high refresh rate screen, and the added peace of mind of IP-rated waterproofing. If you can find a Pixel 4A 5G in stock anywhere, that would be another good alternative at $500 with a better camera, faster processor, and cleaner software. It offers a smaller 6.2-inch screen, though, and again, you’ll have a hard time finding one new at this point since its successor, the Pixel 5A, will likely be arriving in the near future.

If none of the above suits you, then the A42 5G really isn’t a bad choice. Its healthy support policy, decent overall performance, and robust battery life make it one of the best options from Verizon for around $400. Just don’t get too excited about mmWave.

To use the Samsung Galaxy A42 5G, you must agree to:

There may be more. For example, Samsung’s Weather app also has its own privacy policy that may include sharing information with weather.com.

Final tally: there are five mandatory agreements and at least three optional ones.