When the entry-level earbuds are this good, why go Pro?

The Buds 2 improve upon their predecessors by adding active noise cancellation. But in the few days I’ve spent with them so far, I’d say the bigger, most impressive progress Samsung has made is with their design and fit. These are the company’s smallest and lightest true wireless earbuds yet. And in my ears, the Buds 2 provide a flush, discreet fit that uniquely stands out among the company’s top competitors. Still, they trail the Buds Plus in battery life, so not everything is necessarily better. But Samsung got enough right that these could end up the new go-to pick for Android users who want an easy and reliable pair of wireless earbuds with satisfying sound. In fact, Samsung did so well with the Buds 2 that the flagship Buds Pro just became a much harder sell.

Our review of Samsung Galaxy Buds 2 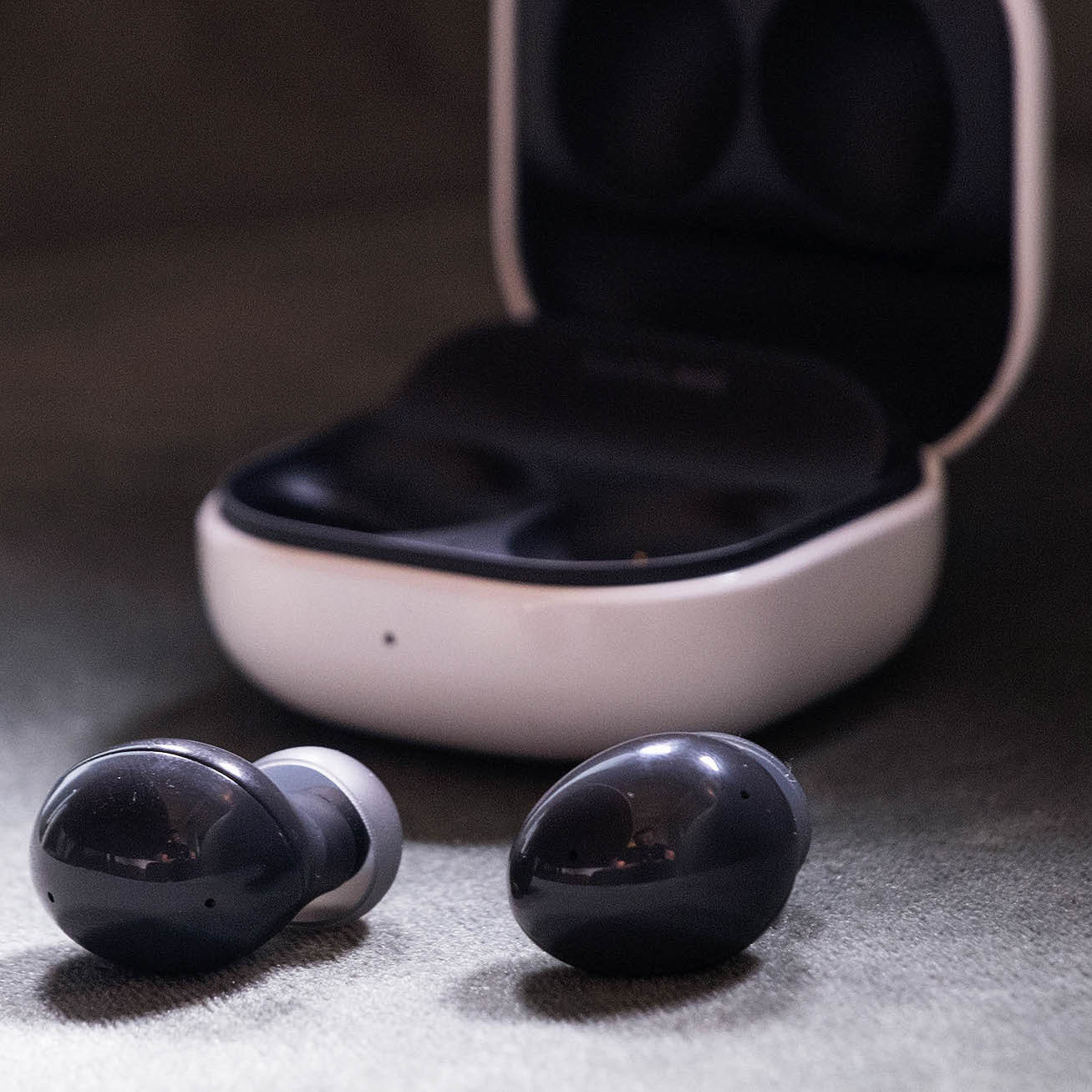 The Buds 2 come in a case that’s similar in size and shape to the Buds Pro and Buds Live before them; Samsung seems to have settled on this jewelry box style for the whole lineup, and I can’t complain. It’s small enough to be comfortably pocketable, supports wireless charging, and closes with a nice thunk. The outside of the case is a glossy white, while the matte interior is color matched to whichever hue of the Buds 2 you get: white, dark gray, green, or purple. The earbuds themselves have a glossy finish, which could make them a little slippery in the summer heat, but so far I’ve managed to not drop them.

They’ve got a similar curved shape to the Buds Pro, but the reduced size makes the Buds 2 practically disappear into the crevices of your ear. Looking at someone wearing them straight on, you could miss the Buds 2 entirely. They’re really that subtle. Comparing them to the bulkier Galaxy Buds or Buds Plus, you’re left with an indisputable example of the leveling up Samsung has done in earbud design. If you’re more interested in earbuds as a fashion accessory, the Galaxy Buds Live still exude more unique style. But I’ll take the barely there Buds 2 any day.

Considering how well concealed the Buds 2 are, I assumed voice call quality would suffer. But Samsung managed to outperform my expectations here. Those I spoke to on the phone or over Zoom said it very much sounded like I was speaking through earbuds — but the mics were able to pick up on everything I said without issue. Samsung says the Buds 2 include a new “machine learning-based solution that filters out a variety of distracting background noises.” I’m not sure how much that’s really doing, but I can make calls on the Buds 2 and be confident they won’t be a garbled mess.

Battery life is the one criteria where the Buds 2 can’t measure up to the Buds Plus. Samsung estimates they’ll run for up to five hours of continuous playback with ANC enabled (with the case stretching that to 20 hours). Turning noise cancellation off will extend that to 7.5 hours (or 29 hours including the case). That’s by no means bad, but it’s several hours short of the 11 hours of straight play time the Buds Plus could achieve, which frankly puts those earbuds in their own league. I don’t know many circumstances where you’d be listening to music for 11 hours in a row without ever putting the earbuds back in their case (or just for the sake of giving your ears a break), and it seems Samsung was willing to trade some stamina for this smaller, sleeker form factor. I think it was the right decision.

But what about the Galaxy Buds Pro? How do Samsung’s entry-level earbuds stack up to its most expensive pair? The company predictably says its top-tier earbuds deliver superior audio quality and more powerful ANC. The latter point is accurate: the Buds 2 have the kind of noise cancellation that’s competent but never wows. Their ambient sound also sounds very computerized and artificial, so that’s another area where the Buds Pro fare better. And some features like 360 audio and automatic switching between Samsung devices are absent. I think the most significant real-world difference between the Buds 2 and Buds Pro that will matter to potential buyers is that the latter are rated IPX7 for water and sweat resistance. The Buds 2 are a mere IPX2, so using them in the rain is risky, and trainers or athletes who will sweat a lot might want to go with something more durable.

Those sacrifices aside, they deliver on the sound front — to the point where telling the two sets of earbuds apart just by sound signature can be challenging. Like the Buds Pro, the Buds 2 have a two-way driver design with a woofer and tweeter in each earbud. The bass and treble are dialed up in keeping with the standard EQ curve that many consumers find pleasing to their ears. But I was pleasantly surprised by the broad soundstage of the Buds 2 when listening to the latest Bleachers record, Take The Sadness Out of Saturday Night. Bruce Springsteen’s voice cuts through with just the right touch of grit on “Chinatown,” and even busier tracks like “Stop Making This Hurt” have a nice layered sound rather than coming across as muddled. The earbuds support AAC, SBC, and Samsung’s Scalable codecs, and they’ve mostly been free of audio glitches or cutouts in my time testing them so far. I’ve had the sound occasionally go warbly for a couple seconds when walking on a busy street, but on the whole, performance is solid.

As with other Bluetooth earbuds, you can use Samsung’s Galaxy Buds 2 without agreeing to anything in software. But the Galaxy Wearables Android app plays an important role in configuring settings, and once you install that, you’re agreeing to:

Separate from these agreements, you can opt into sending Samsung diagnostic data about your earbuds to help with bug fixes and future improvements.

The final tally is no mandatory agreements, but two optional ones that are necessary for the complete experience.

Since the Buds 2 are Samsung’s least expensive true wireless earbuds, you don’t get the whole grab bag of features that are standard on pricier models: there’s no auto-pause when you remove an earbud, for example. But that’s not to say there aren’t thoughtful inclusions: when you remove one earbud, ANC is automatically disabled on the other to prevent discomfort, and ambient mode is switched on to help you hear what’s happening. Once you reseat the original earbud, noise cancellation kicks back in. That’s not a mind-blowing trick, but I’ll take it.

Samsung’s Galaxy Wearables app includes the usual set of options to locate your misplaced buds or customize their controls. The Buds 2 recognize single, double, and triple taps, and you can also assign a function for a press and hold gesture. You need to be somewhat deliberate with your taps for them to register, but aside from that the controls have worked consistently. The companion app also now has a fit test to see which of the included three sizes of silicone tips is the best match for your ears.

The Galaxy Buds 2 didn’t need to blow the doors off to be a success. They’re destined to become the default pick for many Android phone owners — especially once the sales, discounts, and bundles with new phones start hitting. They sound perfectly good, fit comfortably, and perform reliably. But above all else, I’m taken with just how compact and low-profile these earbuds are. Just like its latest foldables, the Galaxy Buds 2 are evidence that Samsung isn’t sitting still. It’s hitting on all cylinders.

The Samsung Galaxy Z Fold 3 and Flip 3: all the rumors, news, and announcements