A $1,300 soundbar doesn’t have much room for compromises. You can spend a fraction of that on a perfectly competent Vizio soundbar, and even premium options like the Sonos Arc cost hundreds less. There will always be people that balk at the notion of spending so much money and not putting it toward a traditional surround sound system — and that’s especially true (and a fair argument) when you reach this price level. So when designing its latest flagship 7.1.2-channel Dolby Atmos soundbar, the HT-A7000, Sony knew it couldn’t settle and had to throw in the entire kitchen sink to justify the steep investment.

And that’s exactly what the company tried to do. The HT-A7000, which starts shipping in September, embraces gamers with two HDMI 2.1 passthrough inputs capable of 8K, 4K at 120Hz, and Dolby Vision HDR. There are still very few soundbars on the market that are so well optimized for next-gen consoles like the PlayStation 5 and Xbox Series X / S. You can plug both Sony and Microsoft’s consoles into the HT-A7000 and enjoy their full visual fidelity — with one unfortunate exception that I’ll explain later. If your TV cruelly only has a single HDMI 2.1 / eARC port, Sony’s new soundbar gives you an extra one. That’s something the Arc or lower-priced soundbars can’t do.

Sony has also stuffed this soundbar with practically every way to stream music you could possibly want. Bluetooth and a 3.5mm aux port really aren’t going to cut it for this much scratch, so you also get Chromecast, AirPlay 2, Spotify Connect, plus the option to integrate the HT-A7000 with your Google Home or Amazon Alexa systems. You can pair a set of Bluetooth headphones to the soundbar and listen that way to avoid disturbing anyone. There’s a USB port if you want to plug in a drive that contains your FLAC collection or whatever local audio you feel like playing. The soundbar also supports pretty much every home theater audio codec under the sun, including Dolby Atmos and DTS:X. 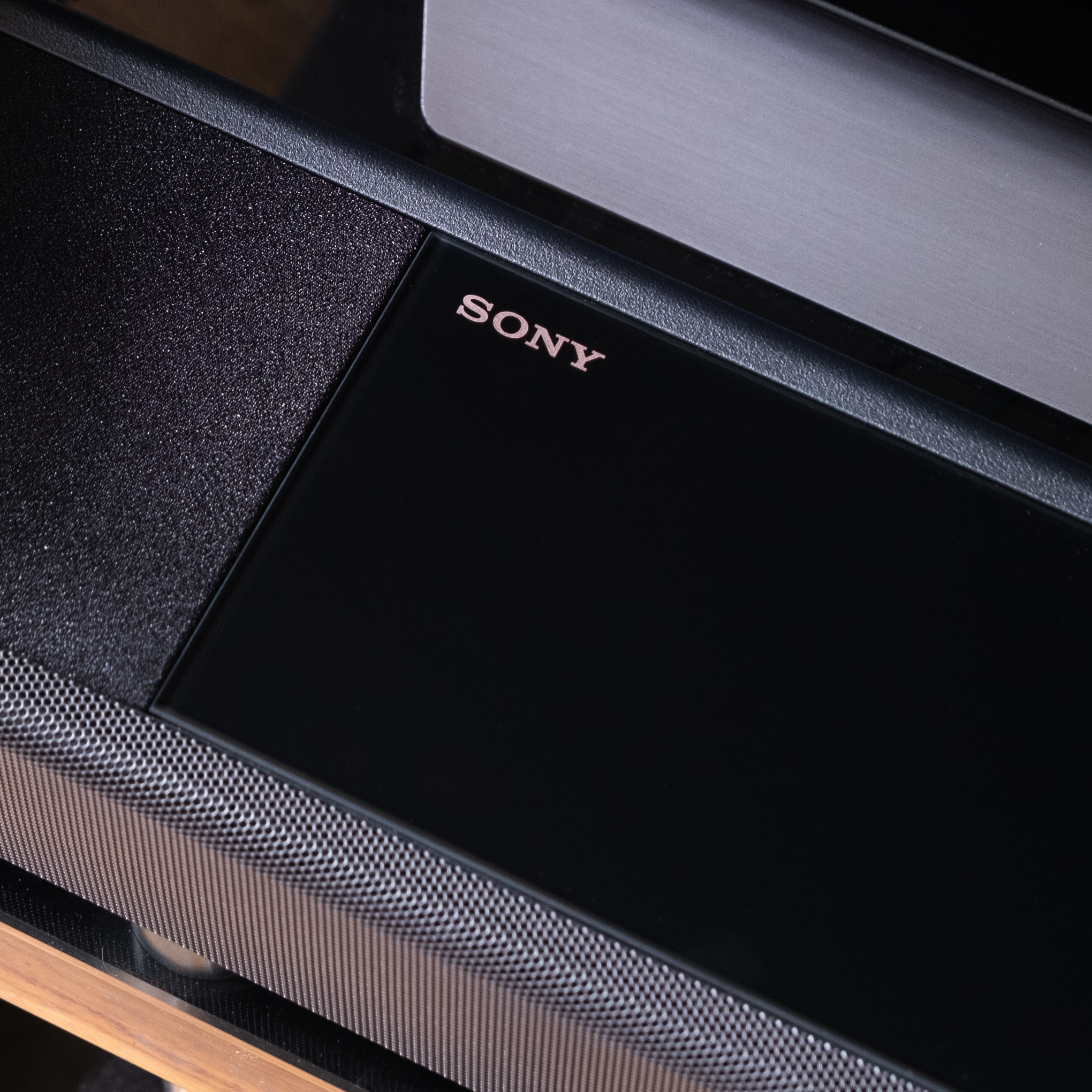 The HT-A7000 is about as future-proofed and loaded with tech as soundbars come. It’s not intended for home theater enthusiasts who want to carefully consider and piece together every individual component of their ideal surround system. This is for the sort of person already splurging on a Sony A90J OLED with enough disposable income to add Sony’s top-tier soundbar to their cart. But to really, truly get the most from the HT-A7000, you’ll also eventually want the optional set of wireless rear speakers ($349.99) and standalone subwoofer ($399.99 for 200W or $699.99 for 300W). All in, the bundle of products I reviewed would cost $2,349.97 before tax. That’s about the same as buying one of those high-end Sony OLED TVs I mentioned.

So while testing the HT-A7000, I’ve gone about it in two different configurations: I’ve used the soundbar by itself plenty since some buyers will just stop there. But I’ve also put the kitted out, exorbitantly priced system through its paces.

It certainly looks the part of a premium soundbar, though I’ll let you decide whether the glass top surface and mix of textures and materials are befitting of the price. On top are capacitive touch buttons for power, input, volume, Bluetooth, and so on. And behind the HT-A7000’s front grill is a small display that shows what input it’s playing from (HDMI 1, 2, or TV) and shows the volume or sound mode when you’re making adjustments. When you’re watching something through one of the two passthrough HDMI ports, you can hit the remote’s “display” button for a summary on your TV screen that details the current audio signal and whether the vertical speakers are active. When the soundbar is outputting TV audio, you’ll see those details on the tiny front display.

Around back is the arsenal of ports: two HDMI in, one HDMI out, inputs for analog and optical audio, a USB type-A port, and power. Aside from the bundled remote control and HDMI cable, Sony also includes brackets and screws for the HT-A7000 in the box if you want to wall-mount it. I can’t really find any faults with the remote: it’s very Sony, but at least there are individual buttons for both HDMI inputs and all the sound modes you’ll use most often.

Setting up the soundbar was quite simple thanks to Sony’s on-screen instructions. I plugged in the devices I wanted to run through the soundbar, plugged it into my LG CX’s eARC port, and I was good to go. In terms of sound performance, the HT-A7000 ranks up there with the very best Atmos soundbars. I felt it my duty to shell out the $20 to rent F9 and experience big Hollywood blockbuster action, and I wasn’t disappointed. Car chases and action sequences are enthralling when coming out of this 7.1.2 bar, and it does manage to provide a distinct feeling of sweeping surround effects.

I also spent some time watching Dave Matthews & Tim Reynolds: Live at Radio City — a Blu-ray I’ve seen used as a demo at audio briefings more than once. Both acoustic guitars came through with warmth, terrific detail, and just the right kind of jangle. The vocals stayed crisp and distinct in the center channel throughout every song. Sony’s S-Force Pro Surround and Vertical Surround Engine technologies do a good job of dispersing sound around the room when you’re watching anything that has a surround mix.

The immersion factor grew more impressive when I watched Atmos content from Netflix or through my Movies Anywhere library. Sony has a “sound field optimization” process that helps the soundbar tune itself for your room. It plays a few loud noises that help the device detect how far away the walls to its left and right are (like Sonos’ TruePlay tuning system), and it detects ceiling distance as well. (You can manually input these numbers if you’ve measured for yourself and want to make sure they’re perfect.) With more drivers at its disposal, the Sony outperformed my Sonos Arc — though not by as nearly as much as I expected considering the $500 price gap. The effect of the height channels was very similar in both speakers. Sony includes different sound modes like auto, standard, cinema, and others like “voice” that emphasize dialogue or “night,” which limits the boominess when you’re watching at night.

Surprisingly there’s no preset audio mode for gaming. But even so, the HT-A7000 kicked out powerful audio when I was playing Ratchet and Clank: Rift Apart on PS5, with no noticeable audio and video sync issues. Switching over to my Xbox Series X, the story was the same. Passthrough largely worked flawlessly, with the soundbar correctly detected different audio codecs being sent from games and streaming apps on the game console.

But then I realized something was off.

See, one area where the HT-A7000 falters with gaming is a familiar one for Sony: variable refresh rate. Currently, the soundbar is incapable of passthrough for both VRR and ALLM (auto low latency mode). That’s a significant downside for owners of the Xbox Series X or Series S; both consoles can use VRR to help smoothen out any dips in frame rate as you play. Microsoft Flight Simulator felt noticeably more choppy when played through the soundbar without VRR. Sony told me that it recommends Xbox owners plug directly into an HDMI 2.1 port on their TV. The PS5 still doesn’t offer support for VRR, so if that’s your chosen console, you’re not really losing out on much right now. Either way, you’ll need to make sure you apply the ideal settings for gaming to whatever HDMI port the HT-A7000 is running into, since the lack of ALLM passthrough will keep your TV from making those changes automatically.

The omission of VRR and ALLM passthrough is enough to prevent the HT-A7000 from being the perfect soundbar for next-gen gaming that I hoped it might be, which is unfortunate. It’s a great match for PS5 at the moment, but losing VRR on Xbox is hard to swallow for this kind of money.

With the optional subwoofer and rear surrounds

As capable as the HT-A7000 is by its lonesome, more speakers are always better when it comes to home theater. Adding in the wireless soundbar and rear surrounds was painless; the soundbar automatically detects them and starts feeding audio to them immediately. (The soundbar’s remote control has buttons for the add-ons, too.) All the virtualization tech in the world still can’t compete with discrete speakers placed behind you, and I got the most enjoyment out of Sony’s new system with the added gear.

I wish the rear surrounds had up-firing Atmos drivers, like the rears that come with Vizio’s Elevate bar do, but nope. They’re just traditional stereo speakers. Sony’s 300W subwoofer can push out some truly growling, reverberating bass. It’s frankly too much for my Brooklyn apartment, but if you’re not at risk of annoying the neighbors, it’s a thrill to unleash.

During setup of the HT-A7000 soundbar, you must agree to:

You can also opt into letting Sony collect data from your usage of the Music Center smartphone app, which the company says is for the purpose of improving its products and services.

The final tally is two mandatory agreements and one optional.

The fully fleshed system is a joy for movies and TV shows, but it also makes a noticeable difference for 360 Reality Audio and Dolby Atmos music, which is all the rage lately. You can really sense the unique placement and details when listening on a proper surround system. Apple Music’s spatial audio feels less gimmicky in this context than it does when listening through headphones. Other features of the HT-A7000 like Chromecast and AirPlay 2 have worked just fine, though keep in mind they’re only there for audio playback on this device and not video.

Sony’s HT-A7000 is a wonderful, powerful soundbar, but it comes at a hefty premium that a lot of people will never seriously consider when options like the Sonos Arc and Vizio Elevate offer excellent performance for considerably less. I can’t help but think that Sony should have included either the rear speakers or subwoofer in the box with this one. Having to tack everything on separately makes the whole proposition an even tougher sell as you cross the $2,000 mark.

The level of future-proofing here is impressive. But since my LG CX has four HDMI 2.1 ports, I already had everything I needed with my Arc, Xbox Series X, and PS5. The passthrough aspect of the HT-A7000 isn’t a big selling point for me, though it does work as advertised — except for the VRR situation. If that asterisk weren’t present, I’d feel more comfortable labeling the HT-A7000 as worthy of the price for those who can swing it and want a simple path to sublime home theater audio. If you’re not an Xbox gamer, maybe it’s still worthy of that title. This is a soundbar that truly does everything. But it comes at such a premium that anything less than perfection is a reason for pause and closely examining other options.