It’s not your typical HP Pavilion

The Pavilion label on the HP Pavilion Aero 13 is misleading.

The rule of thumb with HP’s consumer laptops is: Pavilions are cheap, Envys are midrange, Spectres are expensive. But the Pavilion Aero 13 is much nicer (and a bit more expensive) than your typical budget laptop, with plenty of features — like a 16:10 screen, a 10-hour battery life span, and a mind-blowingly light chassis — that are typically reserved for premium Windows devices.

While testing this device, I’ve been having flashbacks to my review of the Envy x360 13 last summer. I remarked that it felt a lot more like a Spectre than an Envy, and that many of the Spectre’s best features appeared to have trickled down. The same appears to have happened here. This Pavilion feels like an Envy — and it’s priced like one, with models starting at $749.99 ($999.99 as tested). It looks like HP has released the first premium Pavilion, and it’s surprisingly great.

Our review of HP Pavilion Aero 13 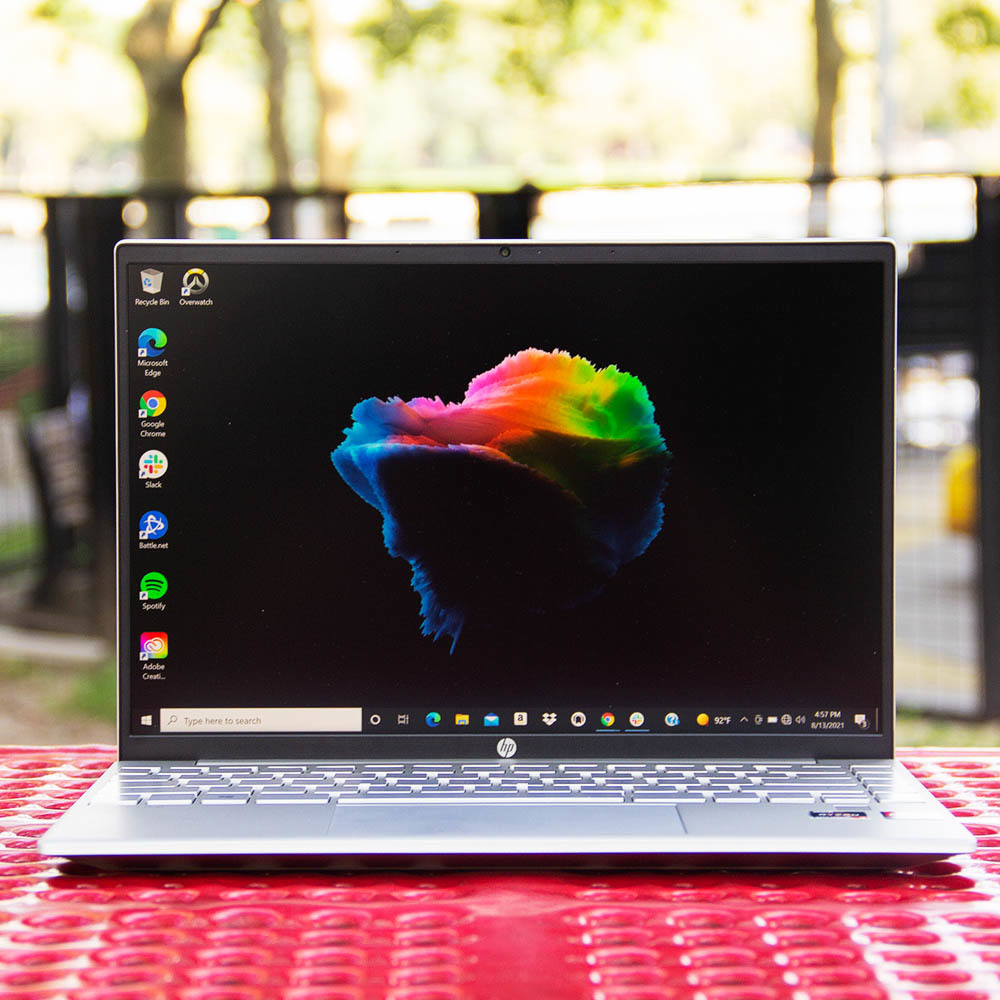 Perhaps the biggest contributor to the Aero’s excellence is its processor. My model has AMD’s eight-core Ryzen 7 5800U, which is one of the fastest U-series processors (the ones in thin and light laptops) you can buy. Models with this processor start at $869.99. It makes the Aero one of the lightest laptops you can buy with eight cores. (My review unit also has 16GB of RAM and 512GB of storage.) The 5800U is positioned to compete with Intel’s flagship Core i7-1165G7 (which is available in the much more expensive Spectre x360 14), but it’s proven itself significantly faster in multicore performance. The Aero is also available with a six-core Ryzen 5 5600U, which we wouldn’t expect to be a big step down in performance. The entire Ryzen 5000 line is fast.

Having raved about the 1165G7-powered Spectre x360 14 not too long ago, I think the Aero was about on par with that machine in everyday use. It blew through my typical workload of around a dozen Chrome tabs with Slacking, Spotify streaming, and Zoom calls over top with no issues. But the battery life — AMD’s true strength — is the real standout here. I averaged 10 hours and 49 minutes of continuous work with the screen around medium brightness. That’s much longer than we saw from last year’s Envy x360 13, and even a bit better than the Spectre x360 14. I also didn’t see any difference in quality on the Battery Saver profile — most people should be fine using that for some extra juice.

AMD’s Radeon graphics did a decent job with gaming as well, though the company isn’t as dominant over Intel in this area. I was able to run Overwatch, on native resolution, at an average of 66fps on medium and 52fps on high at the screen’s native resolution, or 80fps and 58fps respectively at 1080p. Those results are fairly comparable to what we saw from last year’s Envy x360 13 with a Ryzen 4000 processor. That’s expected, since there hasn’t been a significant integrated graphics update between those generations.

If you use creative software a lot, though, you may be better served with Intel machines, which take advantage of Intel’s Quick Sync feature for faster encoding and decoding. The Aero took 15 minutes and 44 seconds to export a five-minute, 33-second 4K video in Premiere Pro. That’s certainly better than last year’s Envy, which took over an hour, but isn’t a great result among recent machines I’ve used. The past few Core i7 devices we’ve run that test on have completed the task in under nine minutes, and even the ZenBook 13 OLED, powered by the same 5800U processor, was over a minute faster.

AMD’s Radeon graphics did a decent job with gaming

The Aero also scored a 147 on the Puget Systems benchmark for Premiere Pro, which tests live playback and export performance at 4K and 8K (and the program crashed a few times before I could even get a result). That’s good for a budget laptop (beating, for example, the Acer Swift 3), but not exceptional across the board — the likes of the Spectre x360 14 and the XPS 13 score better (and it doesn’t approach Apple’s MacBook Air).

The cooling was impressive, though. The Aero’s keyboard never got uncomfortably hot, and I never saw the CPU jump anywhere near concerning temperatures during gaming or benchmark testing. The fans weren’t usually audible, even under heavy loads.

It’s not just the number of cores that makes this laptop exciting — it’s the cores per pound. The Aero 13 HP’s lightest consumer laptop, weighing 2.1 pounds. While that means it’s not the lightest Windows laptop you can buy — as far as I know, that honor still belongs to the Asus ExpertBook — it’s certainly one of the lightest at this price point. I’m used to describing Pavilions as clunky, so that’s a pleasant surprise.

The downside of the thin frame is that the Aero feels a bit flimsy — which remains a significant differentiator between this device and the very sturdy Envy line. There was noticeable flex in my unit’s screen and across its keyboard deck. On the plus side, the magnesium aluminum chassis didn’t pick up any scratches or fingerprints during my testing period. The hinge is also sturdy, with no screen wobble to be seen, and it’s easy to raise and lower with one hand.

Looks-wise, the Aero is unobtrusive and minimalist. It’s less refined than an Envy, due in part to the plastic bezels around the screen. The silver finish on my test unit is somewhat school-laptop-cart-y, but you can get a few nice-looking hues — pale rose gold, warm gold, and ceramic white — for $20 more.

The Aero is unobtrusive and minimalist

It does have a more modern look than past Pavilions, and part of that is the display. This is HP’s first 13.3-inch laptop with a 16:10 aspect ratio. It has a 90 percent screen-to-body ratio, which is comparable to that of much more premium devices — the Envy x360 has an 88 percent ratio. In other words, the Aero is taller, with smaller bezels, than plenty of more expensive devices, and it provides more vertical screen space without adding much size to the chassis.

The 1920 x 1200 display itself is quite bright, easily surpassing 400 nits at maximum brightness. That makes the Aero’s screen one of the brightest I’ve tested this year. That’s surprising to see on a budget laptop — the Spectre doesn’t even break 300. I could use the device outside in bright sunlight and didn’t see any kind of glare. Colors and contrast were good as well. I would wager this is one of the brightest screens you can get at the Aero’s price point.

Everything else about the chassis is good, but not quite great. The touchpad — 23 percent larger than the touchpads of previous Pavilions — isn’t my favorite, with a bit of a coarse texture and buttons that require a firm press, but it works. The keyboard is also fine, though backlighting costs $20 extra. It’s fine to type on, but neither as comfortable nor as quiet as the Envy’s keyboard (which is one of my favorites on the market). Like other HP devices, the Aero has a row of hotkeys down the left side including Home, Page Up, Page Down, and End.

There’s no Thunderbolt support — AMD CPU, after all — but you do get two USB Type-A, a USB Type-C, an HDMI, and a headphone / microphone combo jack. It’s convenient to have a USB-A port on each side. The only thing I wish it had was an SD slot, a feature that’s appeared on older Pavilion models.

To start using the HP Pavilion Aero 13, you’ll need to agree to the following:

That’s six mandatory agreements and 20 optional agreements to use the Pavilion Aero 13.

I only hit one real disappointment during my testing period, which was the speakers. The sound quality is not great, and the bass is particularly weak. There was some distortion that wasn’t a huge problem — I could only hear it if I was leaning close to the laptop — but also didn’t go away until the volume was below 50 percent. You can swap between audio presets in Bang & Olufsen’s audio control center for music, movies, and voice, but they didn’t make much of a difference.

And a final note: There’s bloatware. My unit came with all kinds of garbage preinstalled, including multiple McAfee programs, ExpressVPN, and various games. I was getting peppered with popups until I could uninstall everything. While bloatware isn’t as egregious on budget laptops as it is on premium devices (cough cough, Spectre), I’m still frustrated to see it on a device that costs $1,000 (which my unit does).

If I were shopping for a device under $800, the base Pavilion Aero 13 is what I’d buy. The main things I see as compromises are the chassis quality, the bad audio, and the lack of backlit keyboard for the base price. If those are issues for you, you can improve upon them for a similar price (depending on discounts) if you go for an Envy instead.

But some of the Pavilion’s most exceptional traits — the brightness, the weight, and the battery life — are difficult to beat, even at much higher price points. Despite the Aero’s drawbacks, those things alone make it seem like a no-brainer over budget competitors like the Acer Swift 3, which has the same build and audio issues without those standout benefits. And there are plenty of bonus features — the 16:10 screen, the surprisingly quiet fans, and the powerhouse eight-core processor — to ice the cake. All in all, the Pavilion Aero is an appealing package. Despite its moniker, it’s much more Envy than Pavilion.