Razer is suddenly becoming a seasoned earbuds brand: the new $130 Hammerhead earbuds are the company’s third pair of true wireless buds. They follow the original Hammerheads released in 2019 and the Hammerhead True Wireless Pros that I reviewed earlier this year. The latest set is more “Pro” than not in both looks and features: they offer active noise cancellation, a low-latency gaming mode, and have switched to a in-ear design with silicone tips.

But these days (and at this price), those features are no longer enough to stand out from a hugely crowded field. So Razer decided to add something to its new earbuds that’s impossible to miss: RGB lighting. Just like many of the company’s laptops and gaming accessories, the 2021 Hammerhead True Wireless include Razer’s full Chroma RGB system, which lets you pick from 16.8 million colors and a variety of flashy effects that shine through the snake logo on each earbud. It makes for what Razer calls “the ultimate wireless earbud flex.” But it’s a flex that only other people will see: it’s not like you’ll ever notice the RGB glow when you’re wearing the earbuds. 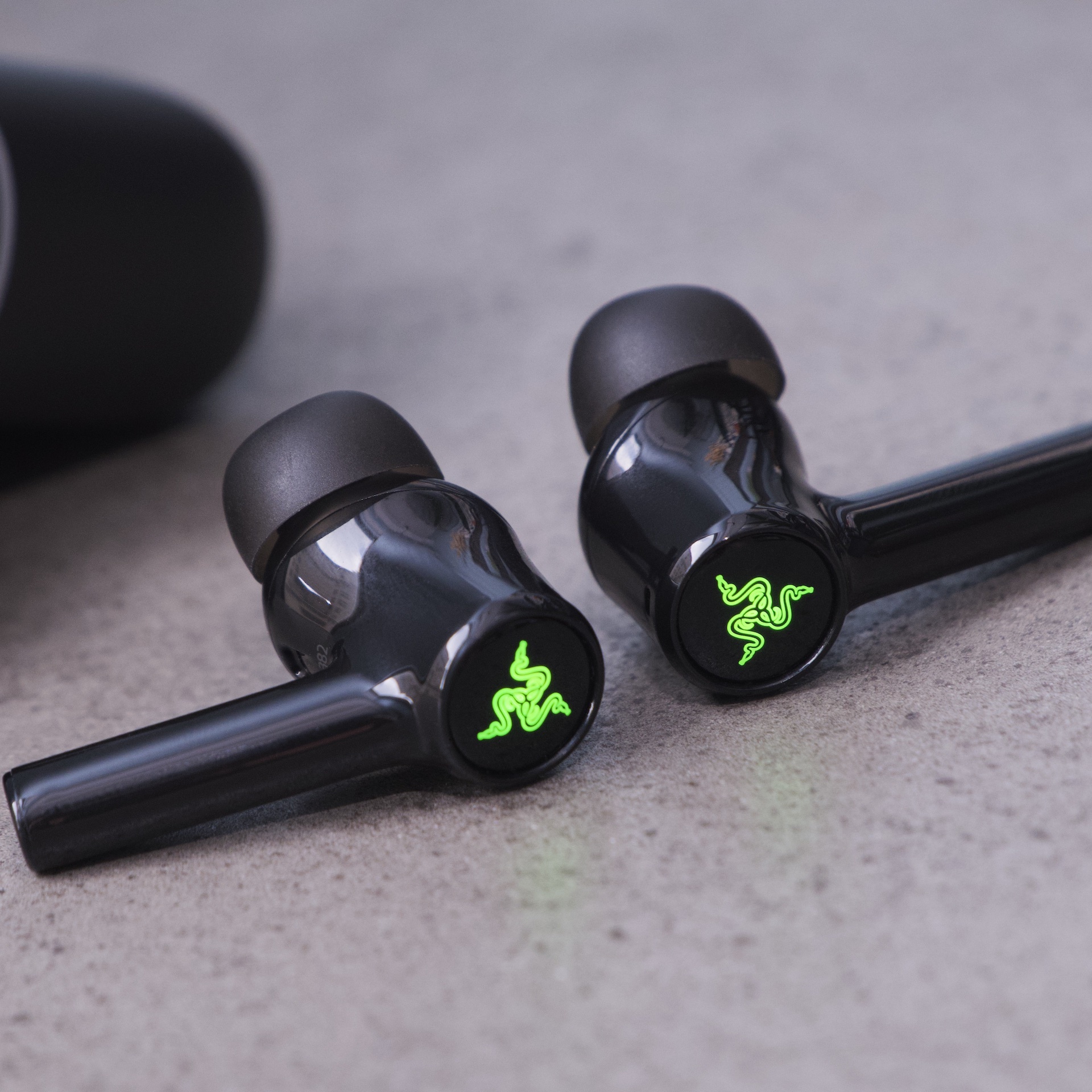 By default when first paired with your phone, the Hammerhead True Wireless buds use a “spectrum” effect that smoothly transitions through a variety of colors. If you want to switch up the lighting, you’ll need to install the Razer Chroma RGB app for Android and iOS — separate from the Razer Audio app that’s used for EQ adjustments and customizing the touch controls. Two apps for a single pair of earbuds? Really? Surely Razer could just replicate the RGB functionality in the main audio app to reduce clutter.

Audio meter: the RGB lighting reacts to the music being played. You can choose to have this effect work with a single color — where it honestly just looks like the light is on the fritz — or rapidly cycle through an endless array of different hues.

Breathing: a slow pulsating effect where the RGB lighting repeatedly brightens and dims. In this mode, you can set two different colors to switch between with each “breath” or have the earbuds pick a different color every time.

Spectrum: the earbuds smoothly switch between a wide range of different colors.

Static: the RGB lighting will stay on whichever color you choose.

Out of the box, the lighting is set to 50 percent brightness, which is enough to draw attention — especially if you’re wearing them at night. And let me tell you, those lights will prove very useful should you drop an earbud onto the floor since they’re so easy to spot. Razer says the RGB lighting is optimized for a minimal impact on battery life, but it still takes a toll. With both ANC and the lighting turned off, the Hammerhead True Wireless can hit 6.5 hours of listening time. Using the RGB feature cuts off an entire hour, and the estimate drops to 5.5 hours. Add ANC to the equation and you’re left with only four hours of continuous playback. (With RGB off and ANC enabled, they’ll last up to 4.5 hours.) Those numbers lined up with my experience, and I imagine most people will keep the lights on unless they’re on a long flight or other scenarios where battery life is a priority.

The Razer Audio app includes equalizer controls: you can pick from presets like “enhanced bass” or “vocal,” but it also gives you full control over the EQ range if you want to adjust every slider to your liking. The app is where you can remap the touch controls, which by default are fairly standard: tap once to play / pause, twice to skip tracks, three times to go back, or press and hold to toggle ANC. But Razer gets a little over-ambitious beyond that. I’m all for customizable controls, but “double tap and hold” is where you start to lose me.

Whether it’s user error or imprecise touch sensors, it’s too easy to mess up that gesture and skip to the next song when you didn’t mean to. The earbuds went into pairing mode once or twice when I didn’t get it just right. And by default, that’s how you control volume — something you’ll want to do often! Frustratingly, you can’t assign volume to the simpler hold gesture (or any of the others). There were also times when the touch controls stopped responding until I cased the earbuds and pulled them out again, so Razer has more work to do with firmware updates.

Design-wise, the Hammerhead True Wireless are very similar to the company’s pricier Pro model. They’ve got the same overall long-stemmed shape, and their cases are practically identical. (Neither set supports wireless charging.) But there are subtle differences when you look closer: the Pros are more matte, while the lower-cost earbuds are all glossy. Razer includes a deluge of tips with the Pros (including Comply foam tips), but you only get the typical S / M / L trio of silicone options with these. And there’s also a large mic inlet on the Hammerhead Pros for their hybrid ANC, whereas the regular model uses a smaller mic that’s better concealed.

Like all Bluetooth earbuds, the Razer Hammerhead True Wireless earbuds can be used without agreeing to anything in software. But the app plays a key role in customizing the controls, EQ settings, and more.

By using the app on either Android or iOS, you’re agreeing to:

Note that on Android, using the Chroma RGB software requires you to grant the app access to your notifications, and it displays a persistent notification until you manually close it.

The final tally is no mandatory notifications and two optional ones that are necessary for the full experience.

Like the Pros, the second-gen Hammerhead True Wireless had a solid fit in my ears and felt both lightweight and comfortable. The large tips made for a nice seal and good noise isolation, which helped boost the noise cancellation and made it feel more effective than it otherwise would. Like a lot of earbuds in this price range, Razer will cut out some of the hums and rumbles of everyday life, but they can’t knock out as much of the surrounding world as premium options like Sony’s WF-1000XM4 or the AirPods Pro. But these earbuds will cancel enough noise to keep you focused on your PUBG Mobile session at the coffee shop without constant distractions. They’re also rated IPX4 for water and sweat resistance, making them a feasible option for runs and other workouts. If you’re on an evening jog, having lights in your ears could be yet another visibility measure to help keep you safe.

Gaming mode on the Hammerheads cuts audio latency down to 60ms, which is enough to avoid any sync issues that could quickly pull you out of the action. But when it’s enabled, you’ll need to stay closer to your device than normal for optimal performance; Razer recommends keeping within two feet. The buds have Bluetooth 5.2 and didn’t exhibit any problematic cutouts or other bugs in my time testing them so far. And despite lacking the “THX certification” that the Hammerhead True Wireless Pros have, their sound quality is quite pleasing for the price. They aren’t as detailed or full-bodied as earbuds in the $200-300 tier, and the recent $150 Samsung Galaxy Buds 2 outperform them with more dynamic sound. But Razer gave the 10mm drivers a nice, even-handed tuning that spans genres well — and those comprehensive EQ controls always help if you want to tinker. They’re neither brilliant nor bad and are right in that place where $130 earbuds so often land.

The Razer Hammerhead True Wireless earbuds aren’t going to be a fit for everyone’s taste: I’m perfectly happy with low-key earbuds that don’t emit a light show whenever I’m wearing them. But by adding RGB lights to its latest earbuds, Razer is doing the obvious Razer thing, and it’s a unique trick that might appeal to some of the company’s diehard fans. I’d sooner recommend something like the Galaxy Buds 2 to people looking for an everyday, under-$150 pair of wireless earbuds. But those won’t get people looking at you quite the same way that these do.