An easy way to upgrade your headphone microphone

Share All sharing options for: V-Moda BoomPro X review: turn your favorite headphones into the perfect gaming or Zoom headset

There’s something to be said for cheap, simple gadgets. The BoomPro is a smart idea that’s executed almost perfectly. With a single cable, you get a microphone (with a flexible arm for easy repositioning), volume controls, and a mute switch. It can substitute for the 3.5mm audio cable that you’d normally plug into your favorite wireless headphones, immediately transforming them into a much better communication tool.

For years now, I’ve been using V-Moda’s BoomPro microphone to chat with people while gaming. During the pandemic, I’ve also regularly used the $35 accessory to improve the audio quality on my end of conference calls — when I don’t want to bother with my desk-mounted Rode microphone, that is.

This week, V-Moda announced a new evolution of that idea: the $45 BoomPro X has a tweaked design, revamped mic, and more streamlined controls. But otherwise it sticks largely to the same formula. You can plug it in when you’re sitting down for some multiplayer or joining a Zoom meeting, and then just detach the cable once you’re done and use your headphones like normal. Antlion’s ModMic products are similar in concept, but they use a magnetic attachment.

Our review of V-Moda BoomPro X 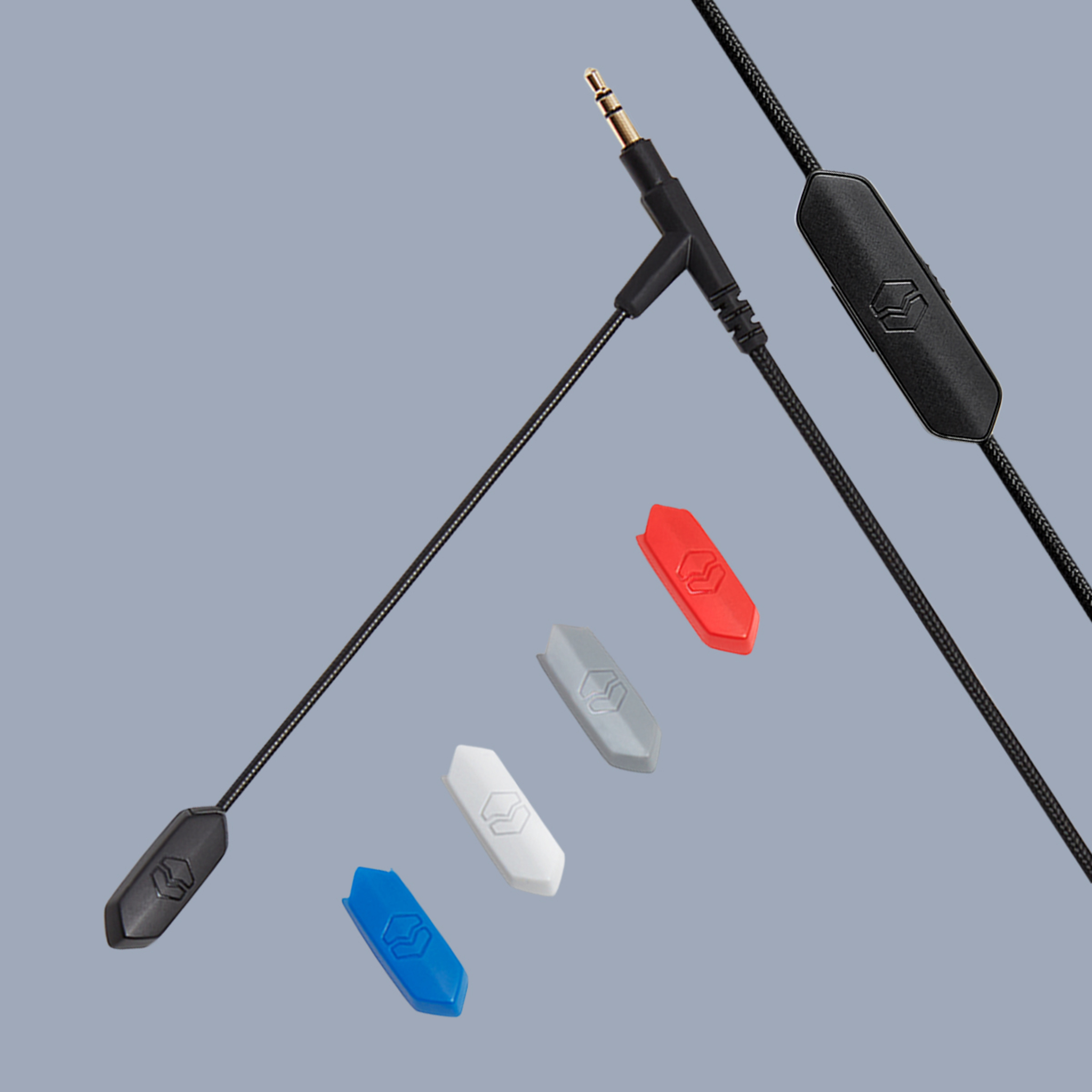 The best aspect of the BoomPro X is its versatility. You can instantly convert any headphones you already own into a gaming or conference call headset. Sure, V-Moda would love for you to use it with the company’s own headphones — but it’ll work equally well with other pairs like Sony’s WH-1000XM4 or Microsoft’s Surface Headphones 2. As long as you’ve got headphones with a detachable 3.5mm cable, you’re all set.

Some headsets (like those from Bose) use a smaller 2.5mm jack, but even then, you can use a 2.5mm-to-3.5mm adapter to get the BoomPro X working. USB-C adapters work fine too. In many cases, using the headphones you already love will also give you better sound quality than you’d get buying a single-purpose gaming headset.

Compared to the original BoomPro, V-Moda has made quite a few changes. The most significant difference is the type of microphone being used: to help reduce background noise, it’s now a cardioid unidirectional mic that’s designed to only pick up sound coming from wherever it’s pointed. The older BoomPro used an omnidirectional mic, which allowed more ambient sound to come through. But now your voice should be better isolated when on work calls or in the middle of a hectic Call of Duty: Warzone match. I’ve regularly got either an air conditioner running or a fan blasting to combat the New York summer heat, and they’re not nearly as audible in my recordings with the new mic so far.

In terms of mic audio quality, the BoomPro X certainly isn’t going to approach a proper podcasting setup or professional microphone. It seems to favor lower frequencies and lacks some crispness. But it’s definitely clear, and you’ll get far better results than you normally would through the built-in mics on wireless headphones. The boom arm makes all the difference for clarity, and you don’t have to worry about nearby noise that your laptop’s mics would pick up during a work meeting. In my tests on both PS5 and Xbox Series X, everyone said my voice came through loud and clear without any annoying audio hiss or other distractions.

The onboard controls have also been redesigned and downsized. They now look much closer to the inline controls on many headphone cables, and the housing is much thinner and lighter. The old controls were so large that V-Moda included a non-removable clip for attaching the plastic to your clothes, but that’s gone — and so is the occasional pull/drag you’d feel from the previous, heavier controls.

But the controls themselves have also changed. Instead of a dial for adjusting headphone volume, V-Moda switched to a slider. It does the job, but something about the dial felt more natural to me. On the other side is a mute switch, which works exactly as you’d expect. Since both of the controls now use similar slider buttons, it’s hard to distinguish between them by feel, which is another reason I preferred the old volume knob. But I don’t think V-Moda had much of a choice considering how much smaller the new controls are.

The BoomPro X cable is shorter than the original, but in the box you get an extension cable if you need more length between your device and the headphones. (Both the standard cable and extension are each 1 meter in length.) I like that, since you don’t always want a ton of extra cord if you’re plugging into a game controller or nearby laptop. There’s also a Y-adapter included. New for the BoomPro X, V-Moda also throws in five different tiny microphone covers in different colors: this company is known for its customization and personalized ear cup shields, but the mic covers are way more subtle.

I’ve liked the BoomPro enough to carry it in my headphones case for a long time, and I’m even happier with the BoomPro X thanks to the improved, unidirectional mic. That’s easily worth the $10 extra, and in return I get a simple gadget that leaves me sounding better when I’m gaming or working from home — all with the headphones I’d be wearing anyway.