BuddyPhones Cosmos Plus are full-featured travel headphones for kids

Bluetooth, noise cancellation, volume limiting — these kids’ headphones have it all

Share All sharing options for: BuddyPhones Cosmos Plus are full-featured travel headphones for kids

In my home, headphones for my kids tend to be a hand-me-down affair. When I’ve upgraded to something newer or better, I pass down my old cans to my kids to use with their tablets or Chromebooks. But this is less than ideal for a variety of reasons: the older headphones might be lacking features like Bluetooth or noise cancellation; what fits my oversized head likely won’t sit comfortably on their kid-sized domes; and standard headphones don’t have a way to limit their maximum volume, which can lead to hearing loss in children.

That’s where the BuddyPhones Cosmos Plus come in. The $99.99 Cosmos Plus check off every feature you might want in a pair of kids’ headphones. Bluetooth? Yup. Noise cancellation? You got it. Volume limiting? Three different levels, as a matter of fact. Kid-friendly aesthetics and size? Yes and yes. They come in six different colors with cartoon graphics on the ear cups and have a color-matched hard case, USB-C charging cable, 3.5mm cable, and boom mic all in the box. Though some parents may balk at spending $100 on headphones for their kids, you can’t deny that there’s a lot of value packed in the Cosmos Plus.

Our review of BuddyPhones Cosmos Plus 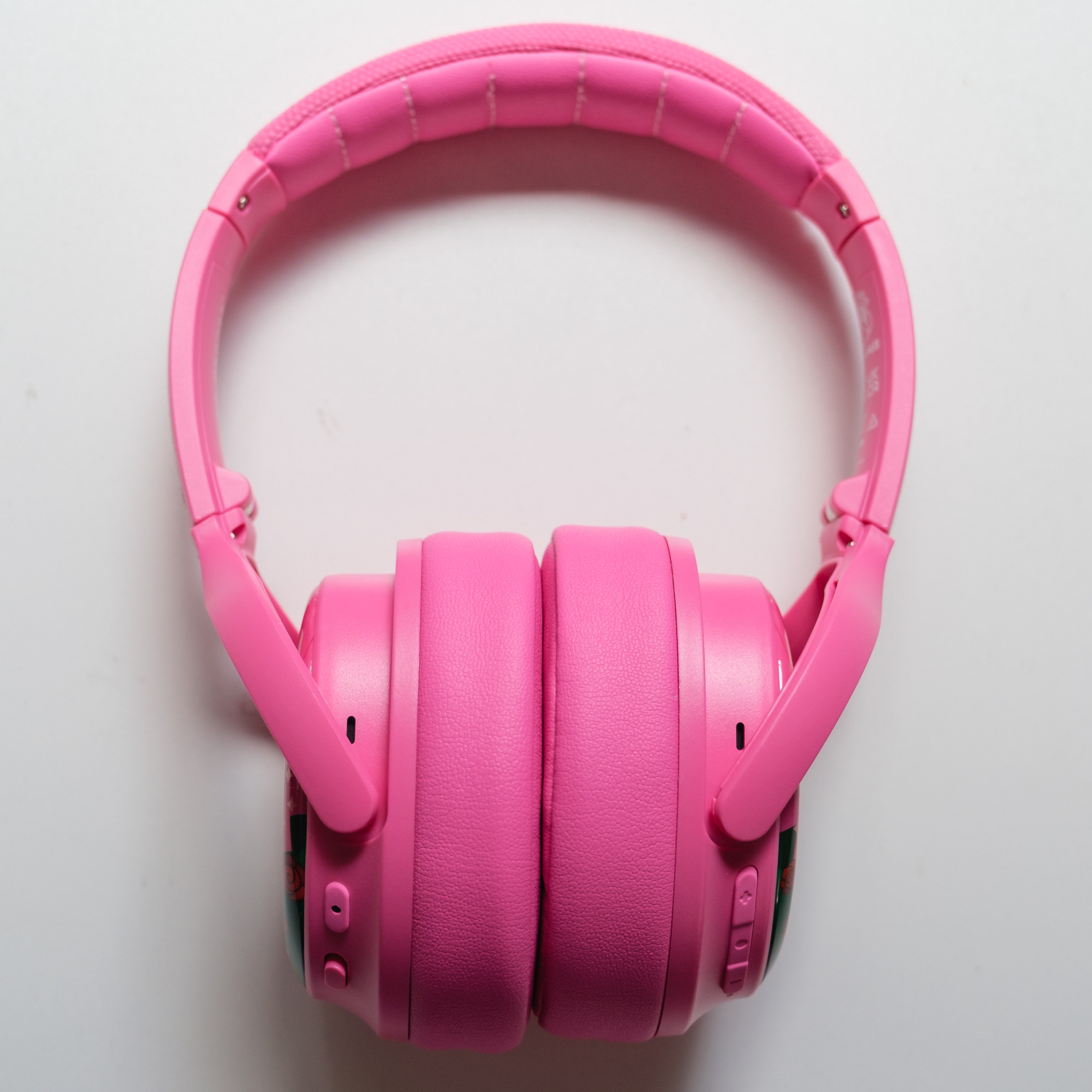 The Cosmos Plus have a colorful, all-plastic design, with a padded headband and plush ear cups. Their 227-gram weight makes it easy for smaller heads to wear them without getting tired, and they have a wide range of size adjustment, from small enough to fit on a five-year-old’s head to big enough to stretch over my larger-than-average adult-sized cranium. Though these won’t compare to higher-end wireless headphones in terms of materials and build quality, they are sturdy and flexible and don’t feel like they will break immediately. The included hard case helps ensure they won’t break when tossed in a bag or not being used.

The outside of the ear cups have cartoon graphics — a fairy princess and rainbow unicorn on the models I tested, with a lion, cartoon DJ, scientist, and pirate on the other color options — and you can get them in pink, white, yellow, gray, blue, or dark blue depending on your child’s preference. There’s no mistaking the fact that these were designed with kids in mind.

I was able to test the Cosmos Plus for a few weeks with my own six-year-old and nine-year-old. We used them at home during their allotted screentime and during two long road trips. For the most part, my kids liked the headphones — there were no complaints of discomfort or inability to hear their videos or games, and they both liked the cartoon designs on the ear cups. My spouse and I appreciated the silence in the car as we crossed hundreds of miles without any bickering or arguing between them.

As for the audio specs, the Cosmos Plus have 40mm neodymium drivers, similar to many other over-ear Bluetooth headphones. The sound quality isn’t going to remotely compete with the best from Apple or Sony — there is bass, but it’s not especially pronounced, and instruments can get lost in the mix easily — but it’s average for this price point and just fine for the music or content kids might use them with.

More importantly, the Cosmos Plus have three levels of volume limiting: 75dbA, 85dbA, and 94dbA. The default mode is the 85dbA setting, which BuddyPhones identifies as the “kids mode.” The lowest setting is meant for the extra-sensitive ears of toddlers (BuddyPhones recommends the Cosmos Plus for ages three and up), while the highest setting is dubbed “travel mode” and is designed to overcome the noise of an airplane engine. Sounds above 85dbA are considered harmful and should be limited as much as possible, according to hearing experts.

All three levels of volume limiting are available when the headphones are used in Bluetooth mode, while the wired mode is set to the 85dbA limit. Changing the mode requires holding volume up and volume down buttons together for two seconds, which will cycle the headphones through the various modes. It’s relatively simple for parents to change but not obvious for kids to do on their own. Though I don’t have the gear to validate BuddyPhones’ specific decibel claims for each level, there is a noticeable difference with how loud each setting allows the headphones to be and the middle setting is certainly lower than the max volume my own headphones reach.

Further aiding the volume limiting feature is the Cosmos Plus active noise cancellation, which can be used in either wired or wireless modes. A button on the left ear cup turns the ANC on or off, with a green light indicating it’s on. The noise cancellation won’t silence the world in the way the best noise canceling headphones on the market can, but it is effective enough to help reduce low frequency sounds like a constant fan, road noise, or the drone of an airplane cabin. Having noise cancellation is generally recommended for kids, since it allows them to hear their music or video easier without having to turn up the volume more.

The Cosmos Plus also have a “Study Mode,” which is activated by a switch on the left ear cup. The company says this boosts the midrange and “lowers down part of the audio spectrum which is not on the voice human spectrum and can impact audibility of a voice.” It’s also designed to make it easier to hear voices when on video calls. The Cosmos Plus have microphones on the ear cup and the detachable boom mic that can be used instead. But neither are particularly great — I tested the Cosmos Plus on a day of Zoom calls for work and had mixed results. My colleagues said the boom mic caused my voice to clip, producing a crackling sound, while the ear cup mic had a noticeable echo.

Lastly, the Cosmos Plus have the ability to share their audio with another set of wired headphones, simply by plugging them into the 3.5mm headphone jack on the left ear cup. This is a convenient feature when two kids are watching the same movie on a single device.

But despite the long list of features, there is room for improvement, particularly in how the Cosmos Plus are powered on and off. Instead of a switch to go from off to on to pairing mode, the Cosmos Plus rely on long-pressing a single button located between the volume buttons. A one-second press will turn the headphones on and flash a blue light; do the same when they are on and the light will flash red and turn the headphones off. But if you hold that button down for a second or two too long and miss the first light flash, the Cosmos Plus will go into their pairing mode and you have to release the button and hold it down again for five seconds before they fully shut off and you can start over.

This made it difficult for the kids to turn the headphones on and off themselves — nearly every time they wanted to use them my spouse or I would have to handle turning them on and making sure they connected to their tablets correctly. If they didn’t turn the headphones off properly when they were done, they risked running the battery down unnecessarily in the case. Though I appreciate the button controls over the touch swiping that a lot of modern Bluetooth headphones use, the power button should really be a switch instead.

Additionally, while it’s nice to have the noise cancellation separate from the Bluetooth controls, allowing it to work both wired and wirelessly, it also meant that sometimes the kids would remember to turn it on and sometimes they wouldn’t. They would also forget to turn off the ANC when they put the headphones away, since the button is separate from the power button.

As for battery life, BuddyPhones claims up to 24 hours between charges. I don’t think they lasted quite that long in our testing, but they do last long enough that we only have to charge them once a week or so at home. They also lasted through an 11-hour car ride with plenty of juice to spare, though they were not being used the entire time. Charging is done through the USB-C port and takes a couple of hours to top them up.

In all, there’s little to complain about with the Cosmos Plus. They have a wide set of features, including the important things like volume limiting and noise cancellation; come in a bunch of colors kids like; and have all the necessary accessories in the box. Though the power button situation can certainly be improved and the microphones aren’t as good as more expensive headphones, the Cosmos Plus are an ideal travel headphone for kids and certainly better than my old hand-me-downs.