Well-designed, but far too expensive for most people

There’s usually a clear line that divides any manufacturer’s lineup of gaming and business laptops, but the new ZBook Studio G8 blurs HP’s lines a bit. It aims to be multiple machines at once, including a gaming laptop. And for the most part, it pulls the juggling act off, if you can stomach the cost.

The G8 looks like a high-end Windows machine, and it’s easy to see where it fits in HP’s catalog next to the dashing Spectre X360. This one borrows the glossy trim going around all of its edges, and its blend of aluminum and magnesium build materials looks and feels great. It has a generously sized Windows Precision trackpad, and its keyboard is just as delightful to type on as some of HP’s other recent models we’ve reviewed.

It’s a simple but gorgeous laptop, yet I wouldn’t recommend this $4,727 configuration of HP’s ZBook Studio G8 to most people. The price is overkill if all that you want to do is game, and most people likely won’t need the robust suite of privacy and security features (like an Absolute persistence module, TPM 2.0, Bitlocker encryption, HP Power On Authentication, and much more) that are included to accommodate the enterprise crowd. There are some very good laptops out there suited for creators or gamers that we recommend.

But as an all-in-one entertainment, gaming, and enterprise device (a unique combination, to be sure), the ZBook Studio G8 is a polished, performant effort that delivers powerful specs and many features. 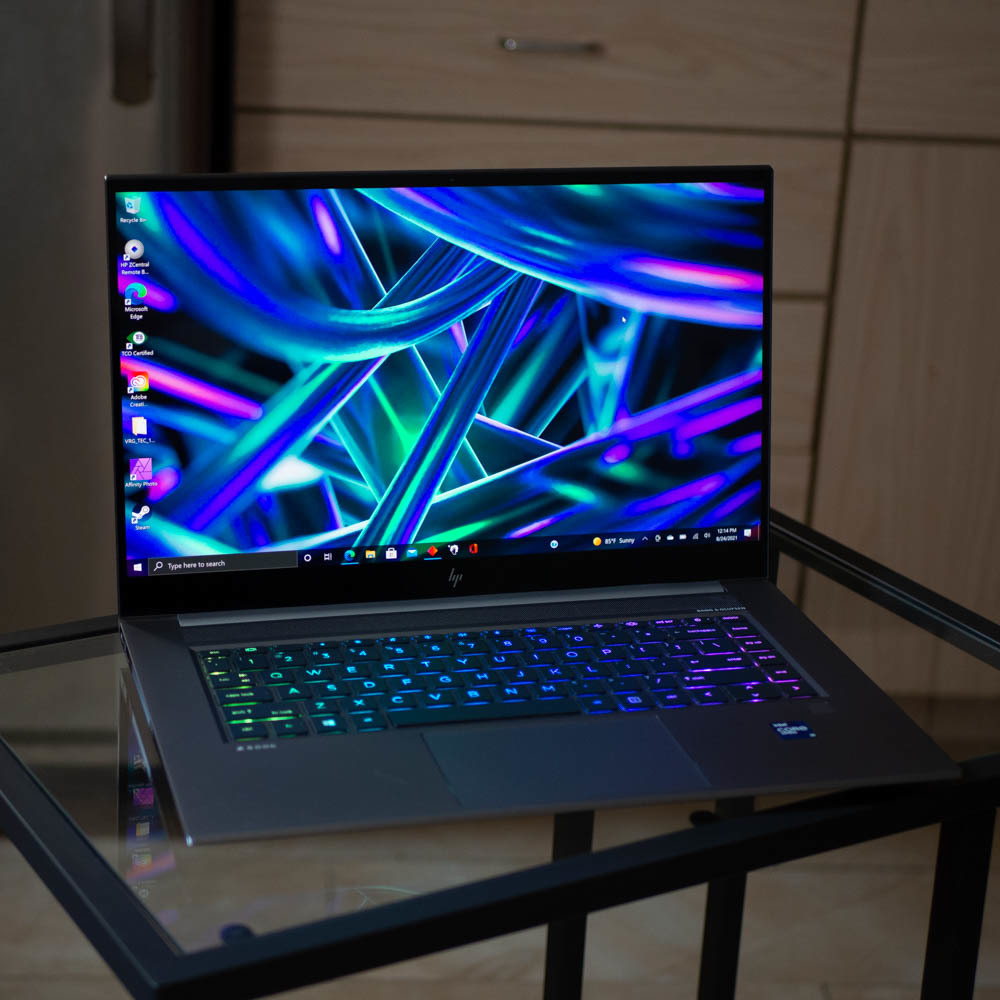 HP’s ZBook Studio G8 is a versatile laptop, but it invites comparisons to other gaming laptops in a few major ways, the most noticeable one being its backlit RGB keyboard with custom per-key backlighting. This is HP’s only business laptop to feature one, and it even has the company’s Omen Gaming Hub in the taskbar by default, where you can adjust the keyboard backlight settings and optimize performance for any games you have installed. You might get some strange looks if you work at a buttoned-up office, but it’s also likely that it’ll just make your ThinkPad-toting colleagues jealous.

My review sample has Nvidia’s GeForce RTX 3070 graphics chip (85W maximum graphics power, 1230MHz boost clock), along with other powerful specs including the Intel Core i9-11950H vPro processor, 32GB of fast 3,200MHz DDR4 RAM (soldered on, unfortunately), and a 2TB NVMe SSD (replaceable, but unfortunately just one M.2 slot). Other configurations utilize the RTX A-series graphics chips and are geared toward full-time creators, engineers, and for others with intensive tasks. But this one was made to be both your workstation and gaming rig. So, of course, I got my game on with it.

Gaming is a joyous thing to do with the ZBook Studio G8, especially with this configuration that has a 15.6-inch 4K OLED touchscreen that’s covered in Gorilla Glass 6. It looks so brilliant that I almost didn’t mind it topping out at a 60Hz refresh rate. Enthusiast gamers who crave seeing their games playing at 100+ frames per second won’t get that here, at least without plugging an external monitor in. There’s an HDMI 2.1 port, so you can output to 4K at fast refresh rates, if you have a compatible monitor and if you play games that can run well on this laptop. For those who really want fast-moving graphics on the laptop’s screen, HP makes a non-OLED screen option that can go up to 4K IPS instead of OLED at a 120Hz refresh rate, but it naturally won’t look as luscious even if it’s running at a faster clip.

As is always the case, performance will vary depending on what games you like to play, but gaming at native 4K resolution in Destiny 2 yielded good results, running at around 45 frames per second on the highest graphical settings. Making a few tweaks to the shadow quality and to the anti-aliasing pushed it up to a steady 60 frames per second. Red Dead Redemption 2 presents more of a challenge for laptops, and the ZBook Studio G8 managed an average of 37 frames per second at 4K resolution with ultra graphical settings turned on. Not bad, and switching on the Nvidia DLSS feature boosted it to a more playable 47 frames per second at 4K resolution. Just a few tweaks later, it felt great to be running this demanding game on a workstation at near 60 frames per second. The G8 isn’t as loud during peak performance as some gaming laptops, but with some games the metal section above the keyboard becomes almost too hot to touch. I didn’t notice any throttling in performance during gaming or otherwise.

The capable specs in this ZBook Studio G8 let it fly through my everyday work tasks, which usually involve having over a dozen Microsoft Edge tabs open at once, with Slack and Spotify running in the background. Occasionally, I’ll open Affinity Photo to crop photos, too. Most laptops with a good amount of RAM don’t struggle being put through these paces, so I ran a 4K export test in Adobe Premiere Pro to give it more of a workout. It didn’t break much of a sweat here either, sprinting to complete the export of a five-minute, 33-second video in four minutes, 14 seconds. It’s worth keeping in mind that Premiere Pro can work in mysterious ways sometimes, with better specs not necessarily leading to faster export times. We’ve seen some less pricey laptops perform just as well in this test as the ZBook Studio G8, if not better, though this is a good result.

Outside of performance, I’m happy with most of the design choices that HP made for the ZBook Studio G8. Its keyboard is great, both in layout and the key feel, requiring very little time and few errors for me to adjust. The same goes for its trackpad, which I mentioned before has Windows Precision drivers and is responsive, with a satisfying, tactile click. As for my wishlist for the next iteration, I wish the trackpad’s entire surface was easy to click, like Apple’s MacBook trackpad. The bottom of the trackpad here offers an effortless click, while it gets a little tougher about two-thirds of the way up toward its top. Also, the ZBook’s OLED screen is a treat to look at, but I hope HP employs a taller 3:2 aspect ratio here next time, like it does with the Spectre X360 lineup. Lastly, there are a dearth of ports for a laptop of this size, and for one made to wear so many hats. It has just one USB-A port in total, along with two Thunderbolt 4 ports, HDMI 2.1, a Mini DisplayPort jack, a headphone jack, and a proprietary plug for its 200W power brick (some models use a 150W brick). The brick itself is compact, with a braided cable going to the laptop.

There’s a Windows Hello-ready webcam and a fingerprint scanner for signing in securely, though using either one is optional. The quality of the 720p IR webcam isn’t stellar, but it gets the job done. (If you care about video quality, though, maybe you’ll find something better in our USB webcam buying guide.) The speakers are better than I expected for taking video calls with, or for listening to music, though you’ll get better performance out of just about any set of headphones.

This version of the ZBook Studio G8 comes with some other welcome extras. It’s one of a few HP models to ship with Tile functionality and it has the app pre-installed. You’ll be able to track its location via the Tile mobile app, so long as it still has battery life. If photography or shooting videos is a profession or a hobby, you’ll get good use out of this laptop’s full-sized SD card slot. It supports up to 985MB/s transfer speeds with the SD 7.0 spec.

To start using the HP ZBook Studio G8, you’ll need to agree to the following:

That’s four mandatory agreements and 11 optional agreements to use the ZBook Studio G8.

Battery life in gaming laptops has increasingly become less of a joke and, at times, is actually impressive. The longevity of the ZBook Studio G8 can’t hang with laptops that have AMD’s latest Ryzen processors, but I wasn’t too let down by its roughly five-hour battery life. Powering through roughly a half day of work isn’t bad, considering this model is a 4K display, but that won’t cut it for some people who want a laptop that can survive all day. HP says that this laptop’s Thunderbolt 4 ports can be used to charge it, but they can’t pull enough power to both run the machine and charge simultaneously. Though, it could charge the battery while it’s sleeping or off, albeit slower than the stock charger can.

The HP ZBook Studio G8 is the best enterprise laptop trying to be a gaming laptop, which I recognize is an accolade that doesn’t carry a lot of weight, since it’s really just HP in this niche space. Though, I think if HP iterated on this design and made it a more gaming-focused laptop on the software side, it would have serious potential to take on other chic-looking laptops with real gaming chops, like Razer’s Blade 15 or the MSI GS66 Stealth.

But for now, I suspect there aren’t many people who’ve been holding onto their cash, waiting for this exact kind of laptop to arrive. If you’re a serious gamer who’s looking for something reliable and great, you should get Asus’ ROG Zephyrus G15 that costs nearly $1,000 less. It doesn’t have a 4K OLED, but its specs are more balanced for performance and cost efficiency. More games will run more smoothly with its screen’s lower WQHD resolution, and faster, too, with its 165Hz refresh rate. The ZBook Studio G8 is too costly to recommend, but I’m nevertheless excited about the future of this lineup.