They’re consistent, they’re reliable, and they sound quite good for the price

Share All sharing options for: Jabra Elite 3 review: nailing the essentials for $80

After establishing a strong reputation with great, dependable earbuds like the Elite 75t, Jabra is overhauling its whole lineup with three new models. At the high end are the $199 Elite 7 Pros and $179 Elite 7 Active earbuds, which will hit shelves in October. But for many, the most exciting part of Jabra’s latest trio will be the Elite 3 earbuds, which are the company’s first true wireless earbuds to launch at a price under $100. They only cost $79.99, putting them in competition with EarFun, Anker, JLab, and other companies that are known for quality buds on a budget.

Jabra doesn’t shoot for the Moon with the Elite 3s; they lack active noise cancellation and they sacrifice one feature that’s become a hallmark of Jabra earbuds: multipoint support. You can only pair these with one device at a time, whereas the company’s other products can connect to two audio sources simultaneously. It stings, but it’s also a predictable omission at this asking price. What you’re left with is a set of earbuds that outshine sound quality expectations, deliver lengthy battery life, and above all else, come through with consistent, reliable performance — which can’t always be said of other sub-$100 earbuds.

Our review of Jabra Elite 3 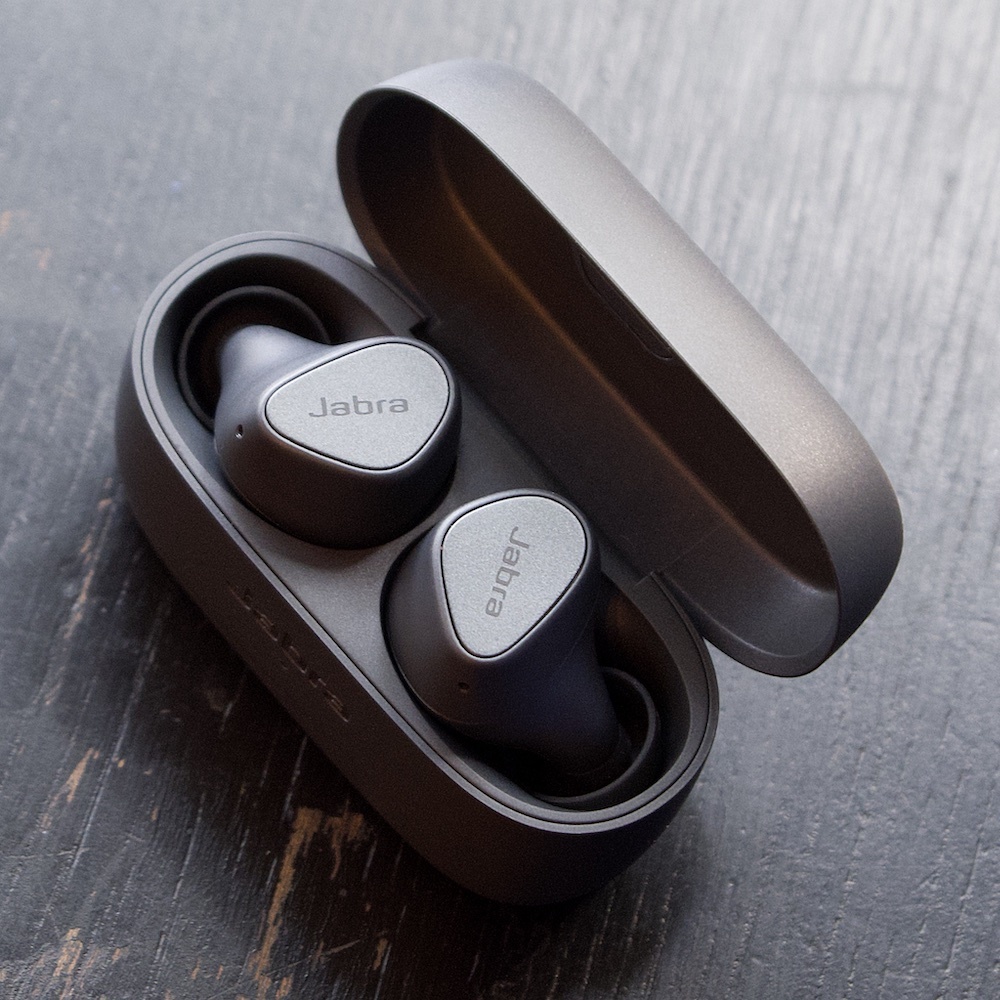 From a design standpoint, the Elite 3s have evolved beyond the utilitarian look of the 65t / 75t / 85t and show a little more style. Jabra describes it as “a sleek Danish design.” My review unit is the standard dark gray, but there are lilac purple and beige options if you want something brighter. Instead of the usual circular button on the exterior, these earbuds have more of a teardrop shape, and the mini stem with perforated mic holes from the company’s past buds is also gone.

But the Elite 3s feel very familiar once seated in your ears; thankfully, they use round ear tips instead of the oval-shaped tips that came with the 85t buds, which never fit as snugly as I would’ve liked. (Three sizes of silicone tips come in the box.) If you liked how the 75t buds fit, you’ll be right at home with these, and their lighter weight makes for even better comfort over longer periods. I never felt any soreness when wearing the Elite 3s. A good seal is crucial for the best passive noise isolation, and I was pleased with how these buds managed to subdue outside noise — even without ANC. They might lack multipoint, but on the plus side, you can use either earbud independently in mono mode. That hasn’t been the case for Jabra’s previous earbuds, so it’s a welcome improvement for the 2021 lineup.

The charging case looks very similar to Jabra’s others and remains nicely compact. But the company definitely opted for a lighter, cheaper plastic this time; the lid has some creaking and a bit of flex, and the case itself picks up scuffs quite easily. Functionally, it does the job fine and holds the earbuds securely. And the battery status LED is sensibly positioned on the front, unlike older Jabra earbud cases where it was around back. There’s no wireless charging here — just USB-C for wired recharges. For battery life, Jabra says the Elite 3s can hit up to seven hours of continuous playing time, and my experience so far gives me little reason to doubt that estimate. The case holds enough juice for three recharges, so you get 28 hours of listening time in all.

The Elite 3s don’t sound like $80 earbuds, and I mean that in the best possible way. Unlike the fatiguing, inarticulate sound signature that is all too common at this price, Jabra’s new budget buds have a nicely balanced EQ that lends the bass some added punch, but not to objectionable levels. The sound isn’t as full-bodied as with the Elite 75t or 85t buds, but it’s far from muddy. Listening to Kacey Musgraves’ new album Star-Crossed, the Elite 3s did a great job with both elaborate, reverb-heavy tracks like “Cherry Blossom” and the vulnerable, acoustic “Hookup Scene.” Dua Lipa’s “Levitating” goes to show that the bass isn’t quite as thumping as on Jabra’s other earbuds, however. Supported Bluetooth codecs include standard AptX and SBC, but not Apple’s preferred AAC.

The Jabra Sound Plus app, available on both Android and iOS, offers a few different EQ presets like bass and treble boost, though you lose the full slider controls that are reserved for the company’s pricier earbuds. That feels a little stingy to me, but I’ll take some EQ flexibility over none at all. You’re also stuck with the default controls, though there’s not much I’d want to change about them. The right earbud handles audio controls, while the left summons your preferred voice assistant. (Jabra supports Amazon Alexa in addition to Siri or Google Assistant.) I really like that the buttons now take up the full outer surface of the earbuds, making them effortless to find and press. And they’ve got a nice click. No one likes mushy buttons no matter the price. On Android, Jabra supports Fast Pair for quicker setup.

The Elite 3s feature a HearThrough transparency mode to give you some awareness of your surroundings. But it’s muffled enough that I rarely bothered toggling it on. The situation where it’s most helpful is when you activate sidetone (which lets you better hear your own voice) on calls. Speaking of which, these earbuds perform decently but aren’t going to boggle the mind. I never got any complaints about mic quality on the phone or over Zoom, and everyone could clearly make out what I was saying, though they do have that talking-on-earbuds sound to them. For $80, that still checks off the “good enough” box for me. Jabra rates the durability of the Elite 3s as IP55, meaning they’re resistant to everyday dust and can handle sweat and splashes of water, but shouldn’t be submerged.

As with other earbuds, the Jabra Elite 3s can be paired over Bluetooth without ever agreeing to anything in software. But since the Sound Plus app is so important for customizing EQ and the earbud controls, it’s basically essential.

Despite their appealing cost and solid performance, I’ve still got some minor nitpicks: the Elite 3s use tones and beeps to indicate pairing status and other functions instead of the unmistakable voice feedback from Jabra’s prior earbuds. I really hope this doesn’t carry over to the more premium new models. There’s no auto-pause on the Elite 3s when you remove an earbud. And as we continue to see active noise cancellation trickle down into more affordable buds from companies like EarFun, Anker, and TCL, Jabra might have to get more ambitious next time around. Or at least improve the rinky-dink case.

But as the company’s first earbuds coming in under the $100 mark, the Jabra Elite 3s managed to impress me with their well-considered mix of sound quality, steadfast performance, easy controls, decent call quality, and lengthy battery life. There are other features you might want for one reason or another, but I can’t think of much else I’d really need for this kind of money.