A decent alarm clock on a slightly pointless smart display, it’s the new charging dock that makes this worth considering

Share All sharing options for: Lenovo Smart Clock 2 review: a good dock with an okay clock

Remember when alarm clocks were small, battery-powered, and lasted forever? My husband relinquished his compact Casio after 13 years because the screen finally warped and he couldn’t read the numbers anymore. That clock made it through countless Hot Shot tours fighting wildfire in Nevada and Idaho, survived in a makeshift shack in the Alaskan wilderness where he worked as a fishing guide, only to finally surrender after a couple years on his bedside table in a Charleston firehouse.

Today, alarm clocks are going through a bit of an identity crisis, as evidenced by Lenovo’s newest Smart Clock that aims to be a nightstand multitasker. In very real danger of being entirely supplanted by smartphones, the alarm clock has morphed into an all-singing, all-dancing smart display. Go on, try to find a battery-powered alarm clock that just tells you the time. No projectors, no night lights, no built-in radio, no Bluetooth, no charging ports — just the time and an alarm. (When you do, can you send it my way? I’m looking for a Christmas present for someone...)

Our review of Lenovo Smart Clock 2 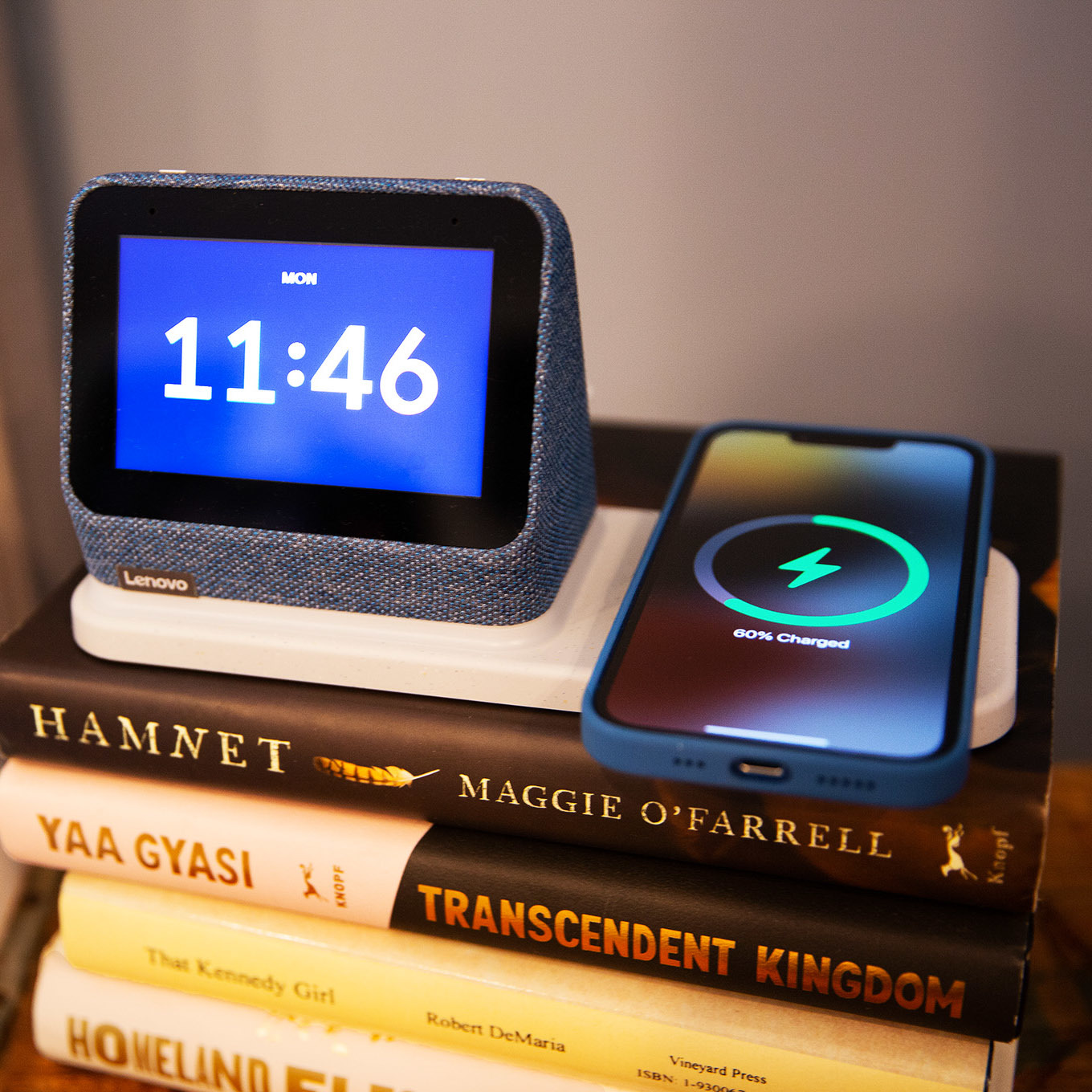 Lenovo’s $89.99 Smart Clock 2 has crammed as much functionality as possible into its tiny, almost five-inch by four-inch frame. It wants to be the Swiss Army knife of nightstands. Building on its first iteration as the smallest smart display on the market (ideally suited for your bedside), the Smart Clock 2 is still a Bluetooth speaker with a touchscreen and the full power of Google Assistant on tap to stream all the audio you could want. Of course, you can also ask about the weather and such, as well as control smart home devices with your voice.

What’s new is a separate dock designed for the clock that brings a night light, a wireless charging pad for your phone, and a USB Type-A port for your peripherals. Finally, you can corral all your bedside charging clutter in one space and have a fancy alarm clock (had you been waiting for that?). It still lacks any backup battery, so if the power is out, your alarm is off. To be fair, no smart alarm clock offers this, which is why my husband resolutely refuses to use one.

With a few caveats (which I’ll get to), this is a great little bedside clock albeit a minor upgrade from the original. It’s the smallest smart display footprint-wise, so a good fit for those with cluttered or tiny nightstands. The wireless charging and LED night light are excellent additions for keeping things tidy, although you’ll still need a bedside lamp as the night light is not for reading. There’s no camera in the device, and the small speakers provide just enough audio quality for some nice bedtime music and to deliver your choice of seven different alarm tones to rouse you in the morning. They sound better than a smartphone but worse than a larger smart display.

As a smart display, it’s less appealing. Functionally, this is more Nest Mini than Nest Hub; it’s a smart speaker with some visual cues and a limited touch interface. While I like having the clock to glance at, the display feels largely wasted, and the interface relies — as most smart displays do — too heavily on voice control. For example, I couldn’t turn the night light off with touch, I had to use voice. This is frustrating particularly in the bedroom, where you’re most likely wanting a bit of quiet.

The diminutive display also doesn’t do some of the main things you expect from a smart display. You can’t watch video and, while I question why you would want to on a display this small, if you’re not going to watch video you don’t really need a display this big (it’s a conundrum, I know). It will stream video from Google Nest security cameras, which is handy at night if something’s going bump outside. But it currently only works with the old Google Nest cameras, not the new ones or any third-party cameras. The screen also doesn’t give you extra visual information when you ask the Assistant questions, as Nest Hubs do, but you can pick a Google Photos album to rotate as your clock face throughout the day.

The Smart Clock 2 has a few design upgrades over the original. There’s a new color — fabric-wrapped blue in addition to gray or black (it’s all very drab, though; would it have killed Lenovo to throw in a pretty pastel?), and a new, taller form factor to accommodate sitting on the new dock. (You can buy the clock without the dock for $20 less, but you lose a lot of functionality.) The physical volume up and down buttons are still here, as is the mute switch at the back. The touch-sensitive surface between the volume buttons also remains to snooze or turn the alarm off (it requires a significant thwack, however). The USB Type-A port is gone — moved to the dock — which will disappoint some if they just opt for the clock and not the dock.

There have been no under-the-hood improvements, this is essentially the same device as the 2019 Lenovo Smart Clock. The speakers have been rejigged and moved up front, but they’re the same tinny, 3-watt offerings, and the sluggish Mediatek quad-core processor remains. This translates to a slightly slower response time from the Google Assistant than on the newer Nest displays, which aren’t exactly speed demons. But the price has essentially dropped, as you can get the speaker and dock for $89.99, just $10 more than the original clock (you’re not going to find an up to 10-watt MagSafe compatible wireless charger for less than $20 anywhere else). It does require Wi-Fi to use the Google Assistant and other features, and you need to use the Google Home app on a smartphone to set it up. However, without Wi-Fi, it will function as just an alarm clock.

I had this on my nightstand for about a week, replacing a Nest Hub (first gen), and I missed my Nest Hub. Most specifically because if I’m going to have a screen by my bed, I want to be able to use it. The Lenovo Clock’s four inches was just too small to comfortably navigate. Swiping up from the bottom (for brightness and volume control, a do not disturb button, and settings) was fiddly but not half as tricky as swiping from the top for quick access to alarms, a Routine shortcut, music, and the night light. No matter how many times I pushed on the night light button, it wouldn’t turn it off, and I had to use voice (there is an adjustable timer for the night light, so it will go out on its own eventually).

I also missed the smart home control panel. You get five swipeable screens on this display: clock, alarms, weather, music, and calendar. The only smart home control is a shortcut to your Goodnight or Good Morning Google Home Routine and the option to turn on or off the lights in the room you are in. If I asked the device to turn off the kitchen lights, it gave me a control interface for that light, which was useful, but again, I had to use my voice.

I could probably get past these issues, mainly because I loved the wireless charger. Previous attempts at using a wireless charging pad by my bedside invariably resulted in finding it dead and buried in my dog’s bed in the morning as I managed to knock it off the charger during the night. With the Lenovo charging stand, my iPhone 13 felt secure thanks to magnets keeping it in place. Lenovo tells us these are small enough so as not to interfere with charging on Android phones. It can charge up to 10 watts, with a maximum of 7.5 watts on an iPhone, and only up to 5 watts if there’s also playing music. But even five is plenty to charge your phone overnight.

Though it’s branded a Lenovo device, the Smart Clock 2 is a Google Assistant smart speaker, and requires a Google account and the Google Home app to use it. This also means it carries most of the required agreements of Google’s own smart speakers. Those include:

The dock also looks elegant, adding a touch of sophistication to the nightstand. It’s a subtle pebble gray color with specks of blue for a textured look, a nice change from all those bright white charging stands. It conveniently doesn’t need its own cable; it takes its power from the clock, so you only have one cord to mess with. The night light is incorporated into the dock as an LED ring around where the clock sits. Helpfully, it lights up for a few seconds when you put your phone on the charger.

The clock itself has a built-in ambient light sensor that adjusts the display’s brightness, so as not to blind you while you’re trying to sleep. (Pro tip: make sure you turn the brightness setting to Automatic by tapping the brightness icon until an A appears, or else you’ll be awake all night). But it does not have the screen technology that gives the Nest Hub that non-disturbing matte look. So while it dimmed suitably, it wasn’t quite dark enough for me. The Sunrise Alarm feature is also slightly less comfortable than on the Nest Hub, casting a harsher bluish light as it attempts to gently rouse instead of the softer, more orangey glow of the Nest.

If you are looking for the smallest, most affordable way to put a smart screen on your bedside table — Lenovo fits the bill for just $70. Spend an extra $10, and you get the night light and wireless charger. Bargain. A Nest Hub is $99, and if you’re willing to go for Amazon’s Alexa as your built-in voice assistant, you can pay $85 for an Echo Show 5, but both have larger screens and bigger footprints and no charging features. If what you really want is a smart alarm clock with a smaller footprint and no distracting display, the smaller form factor of the Lenovo Smart Clock Essential may be a better fit. You’re not giving up much on the alarm clock front, and you drop your cost to $50. But you don’t get that awesome dock with your clock.