The improvements are minor but worth the extra cash

Share All sharing options for: Amazon Fire TV Stick 4K Max review: the one to buy

The tech industry sure has put a lot of hype behind descriptors like “max” over the last few years. So when Amazon announced the $54.99 Fire TV Stick 4K Max last month, I couldn’t help but cringe at the idea of a streaming device picking up that kind of branding. What could max possibly mean in this context? It’s got nothing to do with the physical design; the Fire TV Stick 4K Max is visually indistinguishable from the existing Fire TV Stick 4K. And the two products go tit for tat in their core video and audio streaming features despite the older model often being discounted; at the time of this review, the regular Fire TV Stick 4K is on sale for $33.99.

In this case, “max” is actually about the smaller things. The new stick is 40 percent more powerful than the standard version, which results in apps launching faster and navigation that feels noticeably more fluid and free of stutters or lag. There’s more RAM inside so you don’t have to wait for apps to completely reload as often. Amazon has upgraded the Wi-Fi to Wi-Fi 6 for better wireless streaming performance — assuming you’ve got a router that can take advantage of it. And you also get a newer Alexa voice remote in the box with app shortcuts and a handy shortcut to live TV programming. 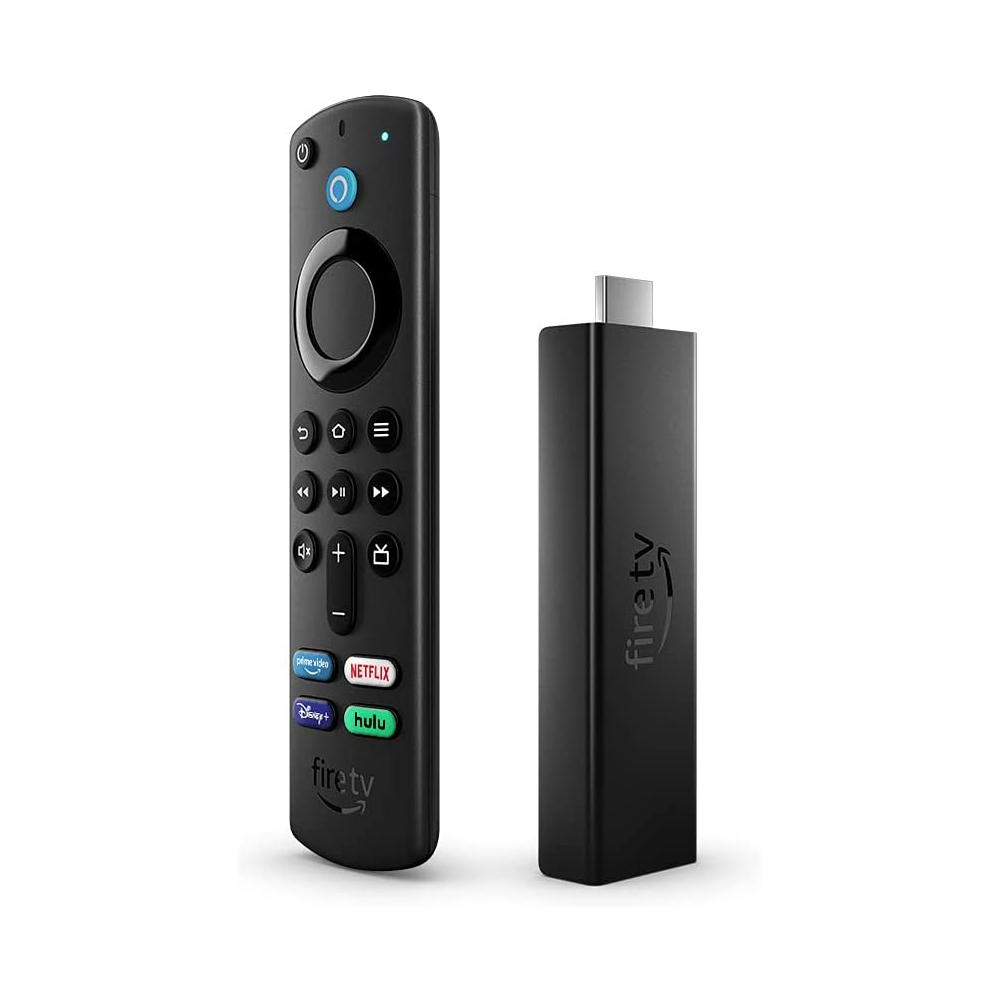 As I mentioned earlier, the stick itself is impossible to tell apart from the standard Fire TV Stick 4K. Unfortunately, despite going “max,” Amazon apparently didn’t see fit to upgrade to USB-C for the (required) plug-in power; this device retains the Micro USB on its side. But getting up and running remains easy: plug the Fire TV Stick 4K Max into a free HDMI port on your TV, find an outlet for that USB power adapter, toss the included batteries into the remote, and you’re good to go.

Amazon bundles the latest version of its Alexa voice remote with the new streaming stick. Aside from the usual playback buttons, there are also dedicated TV controls for power and volume. And you’ll also find four branded shortcuts for Prime Video, Netflix, Disney Plus, and Hulu. (These can technically be reprogrammed, but it’s quite a process.) You’ve still got to press and hold the Alexa button for voice searches or smart home commands. Speaking of which, one new trick the Fire TV Stick 4K Max gains over the regular model is the ability to see a live, picture-in-picture view of your home cameras. The Fire TV Cube can also do this, but not any of Amazon’s other streaming gadgets.

Another advantage of the newer remote is the guide button, which can quickly take you to live TV from supported services that integrate directly with Amazon’s channel guide. These include YouTube TV, Sling TV, Hulu with Live TV, Pluto TV, Tubi, and more. It’s not like the live TV tab is difficult to find on the Fire TV homescreen, but I’m always here for time savers.

When it comes to their visual capabilities, the Fire TV Stick 4K Max and Fire TV Stick 4K are fundamentally identical. They both offer Dolby Vision, HDR10+, HDR10, and HLG. One quiet upgrade Amazon made to the newer hardware is support for AV1 video decoding, which will be welcome news to YouTube; AV1 decoding was one of the points of contention in the company’s very public spat with Roku. Amazon adopting the functionality should head off the possibility of a similar dispute.

Sound specs between Amazon’s two 4K sticks (each supports Dolby Atmos) are also supposed to be the same, but this is one area where the newer stick pulls ahead because of… Netflix. For whatever reason, as noted by AFTVnews, the streaming giant doesn’t support Atmos on the regular Fire TV Stick 4K because it runs an older version of the Fire OS software. Since the newer Stick 4K Max ships with the current Fire OS 7, you get the full Atmos experience when watching Netflix. If you’ve got an Atmos soundbar or surround system, that more immersive audio might be enough for you to spend extra on the Max.

In keeping with the rest of Amazon’s Fire TV lineup, the Stick 4K Max runs the overhauled software experience that the company rolled out earlier this year with user profiles, a more personalized homescreen, and a new “find” feature for picking the night’s entertainment. Thanks to its more powerful CPU, GPU, and additional RAM (now 2GB instead of 1.5GB), the new stick breezes through navigating all the various corners of the Fire TV OS. And apps did seem to load up quicker than on the standard Stick 4K — and certainly faster compared to my Chromecast with Google TV.

That said, Amazon remains heavy-handed with banner ads on the homescreen and is still a little too in your face when promoting its own content. It’s possible to install a different launcher or set up Pi-hole to block some of the advertising, but that’s a step most consumers will never take. The reality is that this is just something you’ve got to put up with if you want a very capable 4K streaming device for under $60. If the ads drive you nuts, the more expensive Apple TV 4K or Nvidia Shield would be wiser choices.

Using a Fire TV Stick 4K Max requires an Amazon account, which means you’ll have to agree to the company’s conditions of use and privacy notice to get started. It’s also important to be aware of privacy settings for Amazon’s Alexa since the voice assistant plays such a large role on this device.

So my advice is this: if you want Amazon’s best straightforward 4K streamer, spend the little bit extra and go with the new Fire TV Stick 4K Max. The speed enhancements really do make for a more satisfying user experience. And even if your home network isn’t yet running on Wi-Fi 6, you’ll have some future proofing in that respect. The Fire TV Cube remains more powerful still, but if you don’t need hands-free Alexa voice controls, it’s overkill for the purpose of entertainment.

I still don’t know whether it’s worthy of the Max moniker, but this is now definitely the Amazon streaming player to buy.