Fairphone 4 review: the price of sustainability

A modular smartphone that (mostly) feels like a modern device

Share All sharing options for: Fairphone 4 review: the price of sustainability

It’s been hard to fault Fairphone’s sustainable credentials over the years, whether it’s the company’s lengthy support periods, easy repairability, or ethically sourced materials. But when it comes to the devices themselves, previous Fairphones have struggled to be competitive with similarly priced smartphones. They lacked modern features, used outdated designs, and generally had more quirks than you’d expect to get from a modern phone.

The Fairphone 4 is a big step forward. It’s every bit as sustainable, with a modular repairable design that Fairphone now offers a five-year warranty for. But more important is that it feels much more like a modern smartphone. The huge top and bottom bezels of the Fairphone 3 have been stripped away, and there are also modern conveniences like an IP54 rating for dust and water resistance.

With a starting price of €579 / £499 (around $669, though Fairphone has no plans to sell the Fairphone 4 in the states) for the 6GB RAM / 128GB storage model, the Fairphone 4 costs a premium compared to its competitors. It’s also getting a much more limited Europe-only release, with no plans for a US launch. But if you only need a smartphone to do basic smartphone stuff, and you’re prepared to pay a premium over other similarly capable competitors, I think the Fairphone 4 is up to the task.

The Fairphone 4 is available to pre-order now, and devices will start shipping on October 25th.

Our review of Fairphone 4 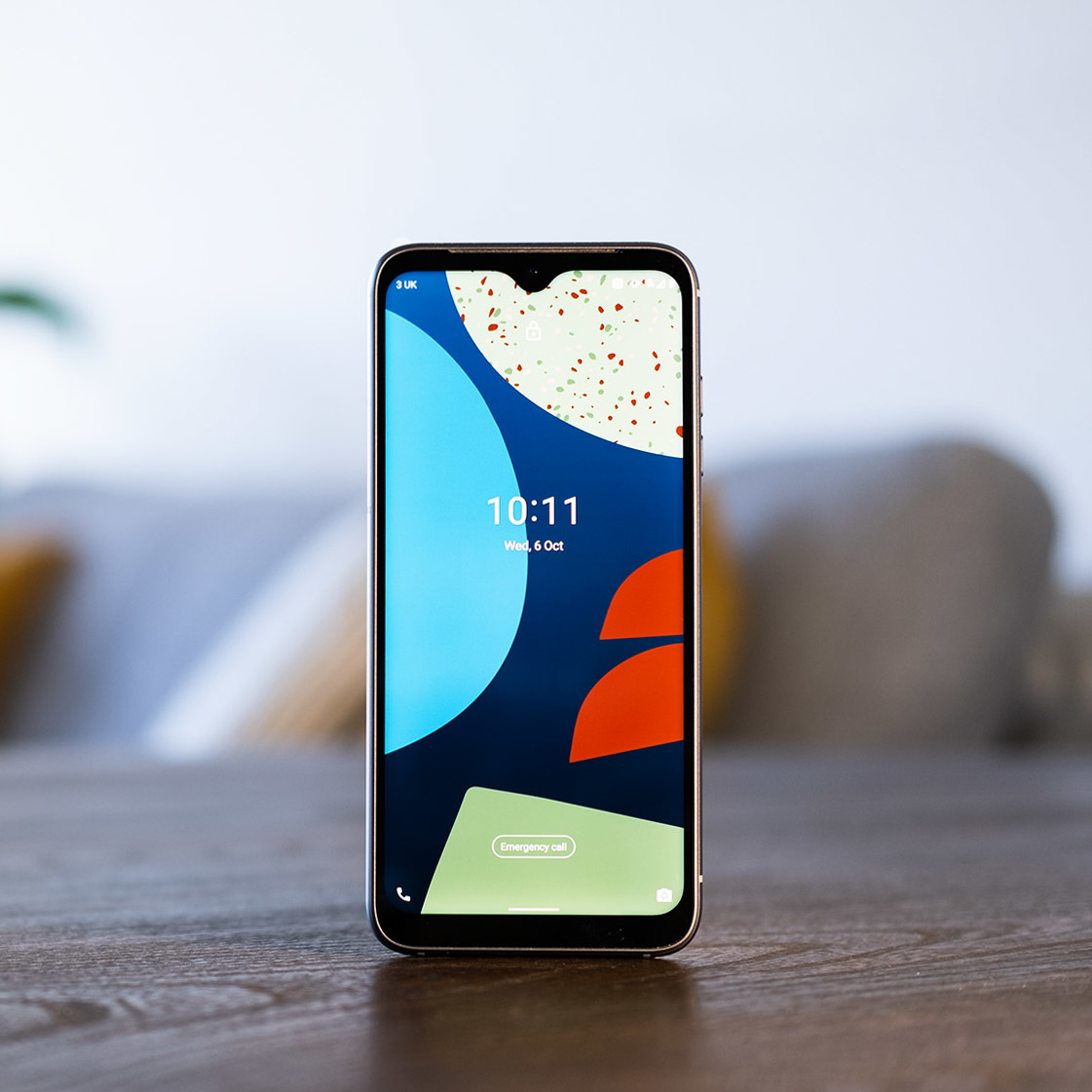 Compared to the Fairphone 3 that preceded it, it’s hard to believe the Fairphone 4 has been produced by the same manufacturer. The chunky and dated top and bottom bezels from the previous phone are gone, replaced with a sheet of Gorilla Glass 5 that stretches right from the top of the Fairphone 4 to the bottom. It feels like Fairphone has caught up with the rest of the smartphone industry, even if that’s because the rate of smartphone evolution has slowed.

Yes, the bezels are still sizable by modern standards, but they’re small enough that the phone is able to have a large 6.3-inch display without feeling too ungainly. It’s LCD rather than OLED, and viewing angles aren’t amazing, but I was happy with how it looked after I turned off its overkill image enhancement options in its Settings app and tweaked the color temperature.

More important than the specs are what the internals of the Fairphone 4 are actually made of. In here, there’s Fairtrade-certified gold, ethically sourced aluminum and tungsten, and recycled tin, rare earth minerals and plastics. Fairphone also aims to turn these materials into a phone as ethically as possible, thanks to initiatives that aim to improve working conditions for the miners and factory workers involved in the phone’s supply chain. Each phone is also “e-waste neutral,” Fairphone claims, since the company will recycle either a phone or an equivalent amount of e-waste with each sale.

The phone’s SIM card is inserted under its removable battery

Flip over the Fairphone 4, and you’ll see its back (made out of 100 percent recycled plastic), which can be easily removed without any tools to reveal the phone’s removable battery and the Phillips head screws that can be used to easily remove everything from its rear cameras to its USB-C port and loudspeaker. You’ll need to take this rear panel off to insert a SIM card underneath the battery during setup, a process which handily doesn’t require the use of a SIM tool — convenient given there isn’t one included in the box (though Fairphone tells me this may differ between release markets).

iFixit is yet to pass its official judgment on the repairability of the Fairphone 4, but the company’s previous phones are the only two devices to have gotten perfect 10s from the repair specialists. As well as being easy to remove, the parts should also be easy to replace since Fairphone plans to have replacements available until at least 2027 (as a benchmark, the company still has some spare parts left for the almost six-year-old Fairphone 2). A five-year warranty should also keep the repair costs down over the life of the phone.

On the software side, the Fairphone 4 ships with Android 11, but the company hopes to provide at least two major Android updates, or four if it can manage it. It’s done a good job at delivering on these promises with previous phones… eventually. Earlier this year, the company finally released Android 9 for the Fairphone 2. Impressive given the Fairphone 2 was five years old at the time, less impressive given it came almost three years after Android 9’s original release.

As you might expect from a phone that can ship without a SIM tool, the Fairphone 4 doesn’t come with anything in the way of accessories in the box as standard. There’s no charging brick, no included headphones, and no USB-C charging cable in the box. There’s also no miniature included screwdriver like we saw with the Fairphone 3. It may have been a cute indicator of its repairability credentials, but including it didn’t make much sense if you’re trying to minimize unnecessary accessories.

On the right of the phone, there’s a side-mounted fingerprint sensor that doubles as a power button, which I prefer to rear-mounted sensors even if they’re not as convenient as under-display models.

There’s no headphone jack next to the Fairphone 4’s USB-C port, which isn’t exactly surprising given it’s a smartphone released in 2021, but is a little more disappointing given Fairphone’s focus on being as consumer-friendly as possible. The team tells me the tradeoff was made to allow for the phone to have an IP54 rating for dust and water resistance. That means the phone should survive being used in the rain, but not full submersion, and it’s not an insubstantial achievement given the back of this modular phone can literally be unclipped without any tools.

As it turns out, I ended up using the Fairphone 4 to take photos during an exceptionally rainy walk while vacationing in the Welsh countryside, so I feel pretty confident saying that the company’s claims about the phone being rainproof are accurate. Here’s a selfie of me on the walk if you want to get an idea of just how rainy I’m talking about (it should also give you an indicator of how the phone’s 25-megapixel selfie camera performs).

It’s great to see Fairphone using a more capable 7-series Snapdragon processor compared to the 6-series one used in the Fairphone 3. For the most part, the Snapdragon 750G keeps up with the demands I placed on the phone in everyday usage, but it wasn’t perfect. Waking up Google Assistant with a swipe up from the corner of the screen to ask a query took a beat longer than I’m normally used to, and there were sometimes hitches in the YouTube app when switching videos between normal and full-screen viewing. It’s capable rather than slick.

But while overall performance is OK, the phone isn’t without its quirks. The most frustrating issue I found is that the Fairphone 4 isn’t great at palm rejection, so when you’re holding it one-handed and reach your thumb across, it’ll confuse your palm for an intentional tap. The Fairphone 4 also seemed to spend more time connected to 3G networks than other smartphones I’ve used, even in areas where I normally get a 4G signal. Other times, however, it happily connected to 5G networks. A strange quirk.

I had no problems with battery life during my time with the Fairphone 4 and generally averaged around four and five hours of screen on time per charge. For me, this typically translated to putting the phone on to charge with between 10 and 50 percent of charge left in the tank at the end of the day. On one day of traveling, I used the Fairphone 4 for several hours of podcast and music listening via wireless headphones, a few hours of social media scrolling, and then for two hours of navigation while wirelessly connected via Android Auto, and I still had 10 percent of battery left when I put it on charge at 11PM that night. The phone supports 20W fast charging, which Fairphone says should refill half its battery in half an hour.

Performance is acceptable, battery life is good, and the phone’s screen is perfectly fine. But the only area of the Fairphone 4 that I think could be a real dealbreaker for some people is its camera, which, despite being based around a pair of 48-megapixel sensors (one for the main camera and one for the ultrawide), produces mediocre shots, even in broad daylight. It’s nice to have the versatility of dual cameras, which are a first for a Fairphone, but it’s a shame that the images they capture are disappointing in anything other than broad daylight.

I think the images in the gallery below speak for themselves. They often look uncomfortably grainy, and there’s a smudginess to most shots that had me searching through the camera app’s settings to make sure I didn’t have a weird setting turned on. But perhaps worse than the quality of the photos themselves is just how slow and laggy the camera app is. Even in daylight, tapping the shutter can cause a painstaking couple of moments before the camera is able to focus and take a photo, and it’s even worse at night. The Fairphone 4 is the only time I’ve regretted using a review phone for vacation snaps because I regret not coming home with nicer photos.

If you’re spending money on a Fairphone 4, your money isn’t being spent on performance. It’s being spent on that five-year warranty, the promise of years of software support, and the security of knowing that, when 2026 rolls around, you’ll still be able to buy a new battery and pop it into the back of the phone without having to learn what a pentalobe screw is. And, of course, you’re paying to ensure that all these parts have been made from as responsibly sourced materials as possible in the first place.

Whether it’s Fairtrade or organic food or sustainably produced clothing, there’s the expectation that you’ll have to pay a price premium for ethically-produced goods, and that’s exactly the case with the Fairphone 4. Although it starts at €579, its performance, especially when it comes to its cameras, is arguably closer to phones that cost less than half as much, like the Moto G Power (which retails for the equivalent of roughly €170) or Moto G Play (around €140). And it’s not at all competitive with smartphones like the iPhone SE (€539 for 128GB) or OnePlus Nord 2 (€399), which are closer in price but still cheaper than the Fairphone 4.

But if you’re the kind of person that can live with the budget phones listed above, if you just need a smartphone for daily use and aren’t concerned about having the best camera or most premium-feeling device, then I think you’re the kind of person who can live with the Fairphone 4. It’s a decent €200 phone that happens to be priced at €579. That’s the price of sustainability.

To use the Fairphone 4, you must agree to: