A strong bias for bias lighting

Smart lighting upstart Govee has added Light Bars to its newest Immersion TV LED Kit (model H605B) to harmoniously extend the backlight to the left and right of 55- to 65-inch TVs. The additions nearly double the illuminated area — and the price. The jump from $79.99 to $149.99 makes the new Immersion Kit a more considered purchase. But if you liked the older Immersion TV LED kit (model H6199) as much as I did, then you’re going to love the upgrade.

Our review of Govee Immersion Kit (H605B) with Light Bars 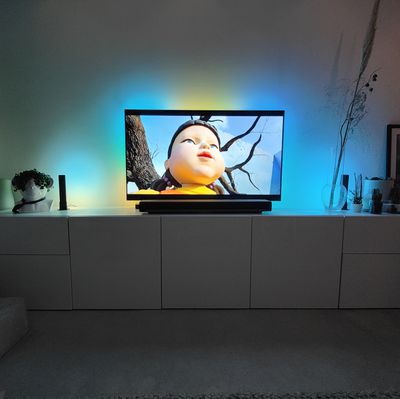 I should first confess to my bias for responsive bias lighting. As I mentioned in my review of the previous Govee model, I’ve long been a fan of the Ambilight tech used on some Philips televisions, the ones that make it seem like the display is bleeding onto the wall in perfect 360-degree synchronization. It makes playing video games and watching things like sports and anime feel more immersive. But that’s me, there are plenty of people who find the whole concept ridiculous and distracting. If that’s you, read no further. Otherwise, continue on my people because this new Govee Immersion Kit is a visual treat.

Steps to install the color-sensing camera and 12-foot adhesive LED light strip are the same as the previous kit, so I won’t repeat them here. (Govee provides a nice video tutorial). I will say that attaching the orange foam stickers (with very light pressure) to the television display for the purpose of calibrating the camera doesn’t feel any less icky the second time around. Nevertheless, my expensive 55-inch OLED remains unharmed, and the installation of the LED strip onto the back of my TV was much faster this time around. In fact, it took less than 30 minutes to install the entire kit since I now know what I’m doing. First timers should set aside about an hour, just like with the previous Govee kit.

The Light Bars attach to the Govee control box via a single USB-C Y-cable. You define which bar is left and which is right in the Govee app during calibration. Govee recommends that the Light Bars are positioned about 20 inches (51cm) from the sides of the TV. They should also be at the same depth as the LED strip on the back of the TV panel to ensure a consistent backlight intensity.

Everything has been tweaked or improved

Although the components look similar to the older Immersion Kit, Govee tells me that everything has been tweaked or improved. That includes new camera software algorithms that properly transmit color information to the backlight and Light Bars simultaneously. In other words, owners of the old kit that are upgrading can’t mix and match, so all that 3M tape will need to be removed before installing the new kit. In my own experience, the tape holding the camera and 12-foot LED strip to the TV released without leaving any sticky residue and without causing any damage to the TV — no hair dryer needed.

Once installed, the Immersion lighting is configured in the Govee Home app over Bluetooth. There’s also Wi-Fi for including the backlighting into your smart home, with baked-in support for both Alexa and Google Assistant. I have little use for the voice commands since I plugged the Immersion Kit’s control box into a smart plug that automatically turns the backlighting on and off along with the TV (it remembers your last used Govee settings).

The Govee Home app introduces an overwhelming set of options for the Immersion Kit. There are interactive party modes that make the lights respond to music and static modes built around your preferred color patterns and scenes. But video mode is where the Ambilight-like magic happens. 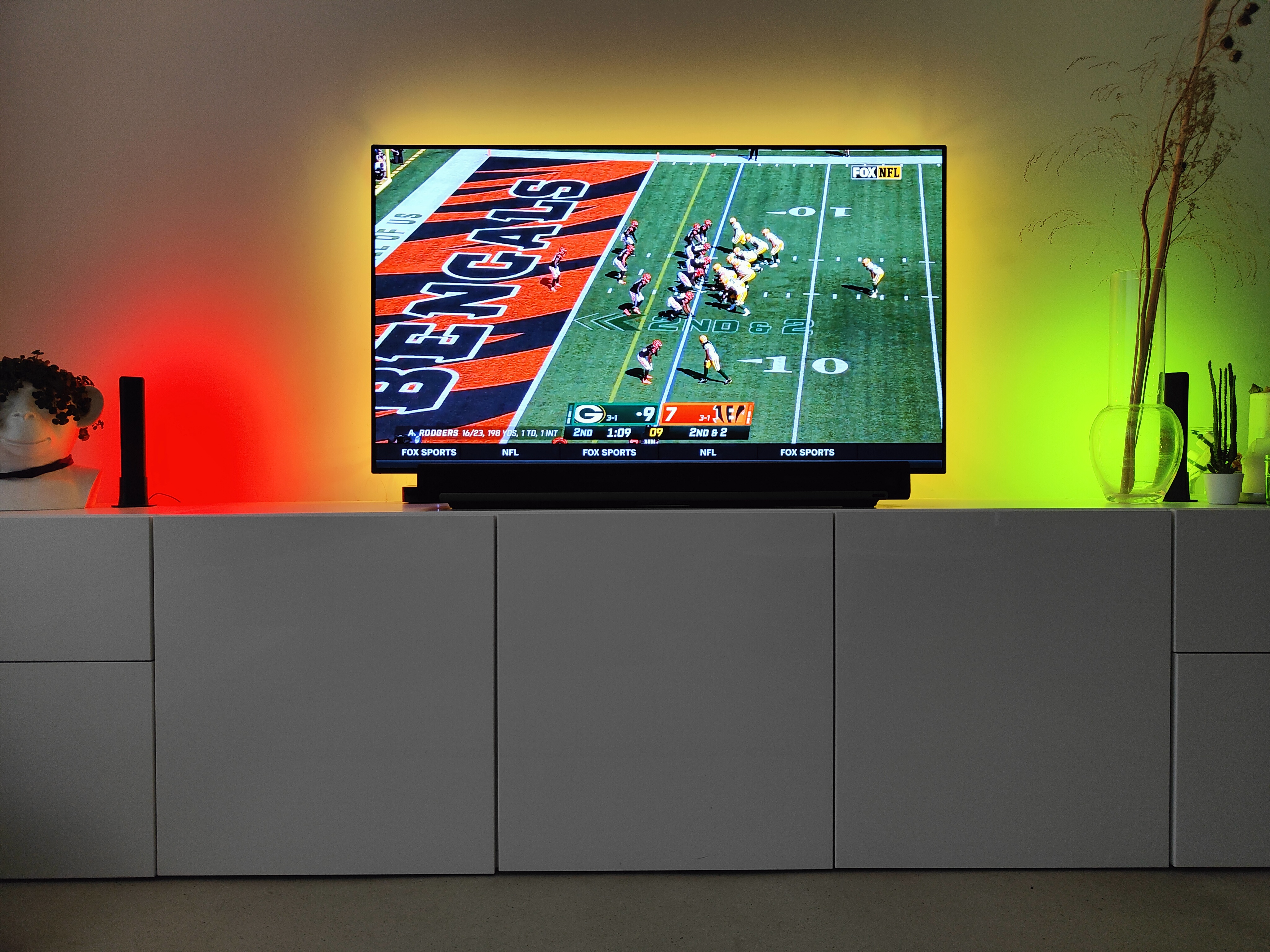 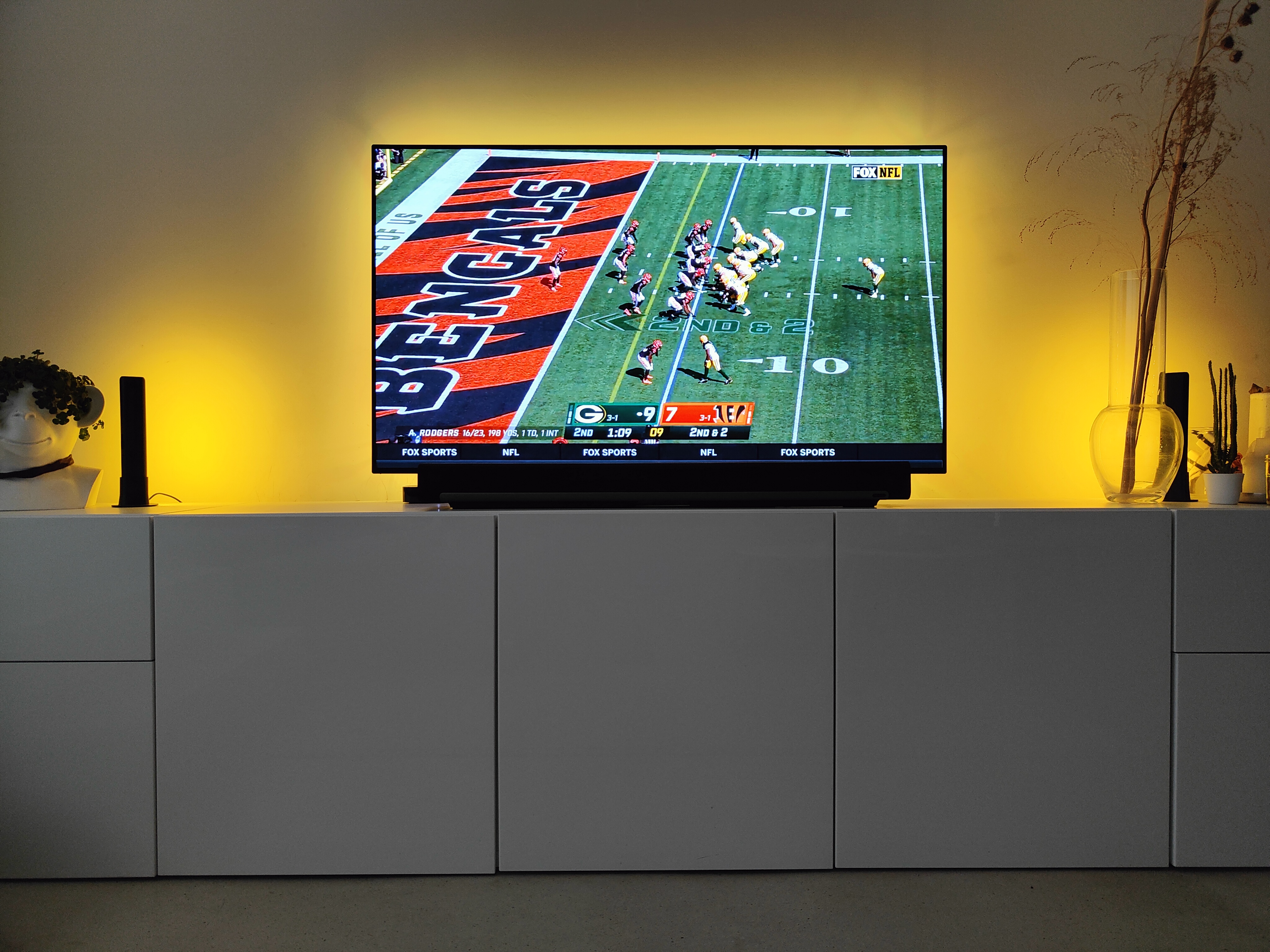 Video mode can be set to either Dynamic (previously known as Game) or Calm (previously Movie). Dynamic causes the colors to change more abruptly, while Calm results in smoother but slower color transitions. Both settings suffer from a slight lag compared to a true Philips Ambilight TV (or even the Philips Hue Play Box), but it’s acceptable, especially when the backlights are dimmed for a more subtle effect.

There are four modes of color synchronization. The Bar Segment mode is my preference as it allows the Light Bar to mimic the variations in color projected by the left and right segments of the RGBIC LED light strip attached to the back of the TV. The Same Color mode is my next preference, for when I want to project a single, less distracting color onto the wall that best matches the current TV scene. The two other modes I never used: I can’t see why anyone would want to use Different Color mode, while the Whole Bar mode was very similar to Bar Segment in practice.

After a few weeks of testing, my default viewing mode is Calm / Bar Segment, and 50 percent brightness and saturation. But that’s me; I urge you to experiment and live with each setting for a few days in a variety of scenarios to see what works best for you. There’s a fine line between immersion and distraction, and the Govee Immersion Kit is flexible enough to help you find it.

I also mounted the camera below my TV panel as before. Yes, it causes the color accuracy to suffer a bit from light interference during the day, but that’s the tradeoff for not having to look at that ugly camera (it’s now conveniently hidden by my soundbar).

The Light Bars and stands are made of cheap black plastic — something you notice when handling them, not when looking at them from across the room. Unfortunately, there’s no option for white which would be easier to camouflage in my home.

Those nitpicks notwithstanding, I love the expansive backlighting effect in my own living room and prefer it over the older Govee model. It did require some time to get used to, but that might have been me gee-whizzing over the tech. Now it just makes everything on the TV seem BIG.

I’m fortunate that my TV also sits on a long low cabinet which allows me to easily install everything. Owners of wall-mounted TVs without nearby shelving for the Light Bars might be out of luck. You could rig a mount yourself (the included Light Bars have mounting points on the back, weirdly) but then you’ll have to contend with two black wires snaking back to your TV. Good luck with that.

All that said, I don’t think the addition of Light Bars justifies a near doubling of the price over Govee’s previous Immersion Kit. But even at $149.99, it remains significantly less expensive than the $229 Philips Hue Play Box which requires you to purchase lights separately, like the $149.99 Hue Play Bar two-pack and $229.99 Play Gradient light strip (and possibly a $59.99 Hue Bridge if you don’t already have one). Govee’s Immersion Kit also works with anything displayed on the TV, whereas the Play Box only works with content fed to it via HDMI. The Play Box, however, doesn’t suffer from any lag.

Govee’s products tend to go on sale quite often. In fact, the older $79.99 Immersion Kit is on sale right now for $67.99 on Amazon and $58.80 direct from Govee, making it a steal, in my opinion. But if you want to take your responsive backlighting to the extreme and can’t wait for Black Friday, you likely won’t be disappointed even at the full retail price.

To actually use the Govee Govee Immersion backlight, you must agree to the following in the Govee Home app (iOS and Android):