A polished PC with inconsistent performance

I can’t tell you how excited I was to test the Zephyrus M16. It takes the AMD-powered Zephyrus G15’s exceptional chassis and adds the two things I most wish that laptop had: a 16:10 display and a webcam. That sounds like a great package on paper, but there’s one other major thing that also differentiates the M16 from the G15: its Intel processor.

A review of the M16, then, isn’t just an opportunity to evaluate Asus’ product. It’s also an opportunity to answer a question I’ve been wondering since I first reviewed the G15 earlier this year (and gave the highest score I’ve given a laptop in my career): how much of the G15’s excellence has to do with Asus’s engineering, and how much has to do with the combined power and efficiency of AMD’s processors?

The M16 has rendered a fairly clear verdict: a lot of it is AMD. The Zephyrus G15 leaves the M16 in the dust, not just in terms of raw frame rates and battery life, but in terms of power-per-dollar. While the Zephyrus M16 does have a few advantages that will be significant for some, the Zephyrus G15 is unambiguously better value for the majority of shoppers. The M16 has a gorgeous chassis with a standout display, but it’s also a real-world illustration of how far behind Intel currently is in value as well as efficiency.

Our review of ROG Zephyrus M16 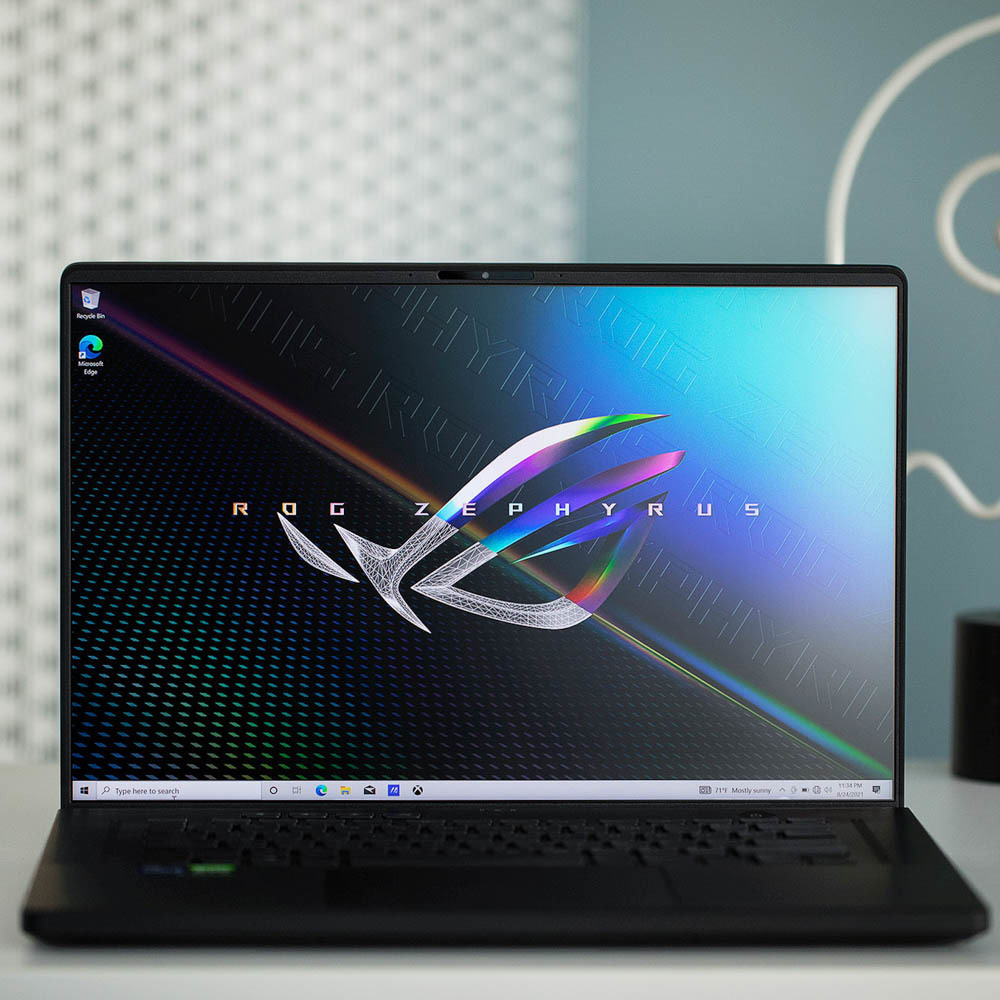 So the Intel-based M16 is already fighting an uphill battle when it comes to value. What does the extra money get you? It’s mostly the screen.

If you’re looking for a QHD 165Hz display with a 16:10 aspect ratio (which allows Asus to cram a 16-incher into a chassis that’s not much bigger than most 15-inch gaming laptops), the Zephyrus M16 is one of few places you’ll find it. Put this next to the G15, and the main difference you’ll notice is that where the G15 has a large and visible chin, the M16 just has more screen. The bottom bezel (at least, the part that’s visible) is borderline nonexistent and gives you a noticeable amount of extra room when scrolling a web page or reading a document.

Vertical space aside, though, the screen is also phenomenal. It’s bright, maxing out at 444 nits, and vivid, covering 100 percent of the sRGB gamut, 86 percent of Adobe RGB, and 98 percent of P3. It’s significantly brighter than the G15’s screen, and the difference does show. Games and images were gorgeous to look at, with sharp colors and details, and the matte texture eliminates all glare even at low levels of brightness.

Where the G15 has a large and visible chin, the M16 just has more screen

The M16 also has a slight advantage as an Intel system in that it can support Thunderbolt 4. It has a Thunderbolt 4 port in addition to a Type-C, a power port, an Ethernet jack, a headphone jack, an HDMI, and a USB-A port on the left and a microSD slot, a lock slot, and a USB-A on the right. It’s a good selection, though I wish the ports were more evenly distributed — seven of the 10 are on the left side.

The M16 has one other feature that’s unique among the recent Zephyrus line: a webcam. Yes, there is a webcam! Both the G15 and the G14 lack this feature, and I’m really not sure why — while not everyone needs one, it would make both laptops more attractive purchases for anyone like me who’s often on video calls. The M16’s 720p camera isn’t great, but it’s not terrible, and that’s saying a lot for a laptop webcam. I was fairly clear on Zoom calls, and the noise-canceling microphones did a fine job of picking up my voice as well.

But the M16 doesn’t hold up to its AMD counterpart in most other areas — and unfortunately, gaming is one of them.

Yes, there is a webcam

Those results look reasonable — until you compare them to the G15. The AMD-powered machine that we tested is the exact same price as this M16 unit, but it has a GeForce RTX 3070. That’s technically only one step up from the RTX 3060, but these numbers illustrate how big that step is. The G15 (at 2560 x 1440) got 58fps on Red Dead on Ultra, 61fps on Tomb Raider with ray tracing on, and 81fps on Tomb Raider with ray tracing off. That’s a sound drubbing from an identically priced unit.

In fact, these results are closer to those we saw from the G14 (which has the same GPU as this M16 model but in a much smaller chassis). The M16 is beating that model by fewer than 10fps on both Red Dead and Tomb Raider. (That device also isn’t the best value — with just a 120Hz display, it’s currently going for $50 less than this M16.) Overall, I don’t see much reason to buy the M16 over the G15 that’s exactly the same price.

Battery life didn’t help the M16’s case. The G15 and the G14 both basically never die, but I was averaging just under six and a half hours from using the M16 as my daily work driver with the screen around 200 nits of brightness. That’s a couple hours shorter than what I averaged on the G15 and only a bit more than what we saw from the Razer Blade 15 Advanced, which has the same GPU but a much smaller battery. Intra-Asus comparisons aside, six hours isn’t a great result for a laptop that’s supposed to be able to double as a primary driver when needed (which is the primary benefit of the 16:10 screen).

Battery gaming wasn’t much better. I only got 57 minutes of Red Dead play out of one charge, where I got an hour and 21 minutes out of the G15. The experience wasn’t great either: the game began stuttering around 22 minutes in and became unplayable (with crackling and distorted audio) at 42 minutes in with 20 percent remaining. The M16’s battery is the same size as the G15’s (90Wh) and it has a weaker GPU, so this looks like it’s on Intel.

Charging was also a bit slow. The 240W charger took 50 minutes to juice the device up to 60 percent with light Chrome use. (The M16 also supports 100W Type-C charging, but that will be even slower.)

Raw performance isn’t the only place where the M16 struggled to keep up. The cooling system is also very loud — even among gaming laptops. The G15’s fans never drowned out my games’ audio, but I really struggled to hear the speakers over the M16’s noise. They were also pretty obtrusive, even when I was just working in Chrome. You’ll want to turn on Silent mode if you’re not gaming. (To Asus’ credit, the fans were effective — I rarely saw the CPU pass 80 degrees Celsius, and it was often in the mid-70s or high 60s during benchmark runs.)

Charging was a bit slow

It didn’t help that the M16’s speakers (two tweeters and two force-canceling woofers) aren’t super loud. Vocals were clear and songs well-balanced, but they didn’t fill my studio apartment, and I sometimes found myself having to lean forward to hear while I was trying to watch YouTube videos, even with volume maxed out. You can use Dolby Access to jump between equalizer presets for gaming, movies, music, and voice calls — the gaming and movies profiles sound a bit tinny on these speakers.

Everything else about the M16 is standard Zephyrus stuff. It’s the exact same weight and almost the same thickness as the G15, at 4.19 pounds and 0.75 inches — portable as 15-inch gaming rigs go. It’s got the familiar dot matrix covering its lid and Asus’ signature ErgoLift hinge that folds beneath the screen and raises the keyboard up slightly (hiding much of the bottom bezel).

The keyboard is great, and the touchpad is massive, with a smooth surface and a very easy click. I did occasionally have palm-rejection issues — the cursor jumped pretty much whenever my palm hit the touchpad. This got bothersome enough that I ended up turning off touchpad input when I was playing games with external peripherals. But overall, it’s an excellent chassis that’s sturdy and sleek.

As with other Windows 10 computers, the Asus ROG Zephyrus M16 presents you with multiple things to agree to or decline upon setup.

In a vacuum, there’s nothing particularly objectionable about the Zephyrus M16. The exceptional 16:10 display and the, well, existence of a webcam are great additions — and they make the M16 more pragmatic as a primary work driver than other gaming laptops in its class. The addition of Thunderbolt and Intel-specific features like Quick Sync will be icing on the cake for creative professionals who won’t be able to find those benefits in an AMD system.

However, the M16 is still a Zephyrus. It’s not intended to be a primary work driver or for coffee-shop creatives; it is, first and foremost, a gaming laptop. And it’s too expensive for its performance. It provides a weaker GPU, worse battery life, and a significantly worse battery-gaming experience than comparably priced AMD systems. You’re paying for this webcam and incredible screen not only with extra money but also with frame rates.

That doesn’t mean there’s no audience for the M16. The screen, the upgraded ports, and the webcam aren’t trivial bonuses. The M16 isn’t a bad laptop, but most gamers will be happier with the G15 — and I wish Asus would put this screen and this webcam on that product.