A shock to the ecosystem

Although the Wear OS watch market has been dominated by the likes of Fossil for many years now, Casio has quietly carved out a niche for itself as a purveyor of more rugged devices. The Japanese company first released its Smart Outdoor Watch all the way back in 2016 and has continued to iterate on the idea with Pro Trek-branded models.

All this time, though, there was one obvious question. Why hasn’t Casio made a G-Shock smartwatch?

G-Shock is one of the most iconic watch brands in the world and has long had a strong association with streetwear culture. Unlike, say, Tag Heuer, whose Swiss luxury always seemed like an odd fit for smartwatches, many G-Shock models are both status symbols and relatively accessible digital pieces at the same time. It doesn’t make much sense for most people to spend thousands of dollars on a smartwatch that will likely be obsolete in a few years, but there are lots of G-Shocks that cost under $100. Surely this is the perfect brand for smartwatches?

Well, here’s the G-Squad Pro GSW-H1000. It’s Casio’s first truly smart G-Shock watch — unless you count some earlier models with limited Bluetooth functionality — and it’s available now for $699. That’s a high price for any smartwatch, and this one struggles to justify it. 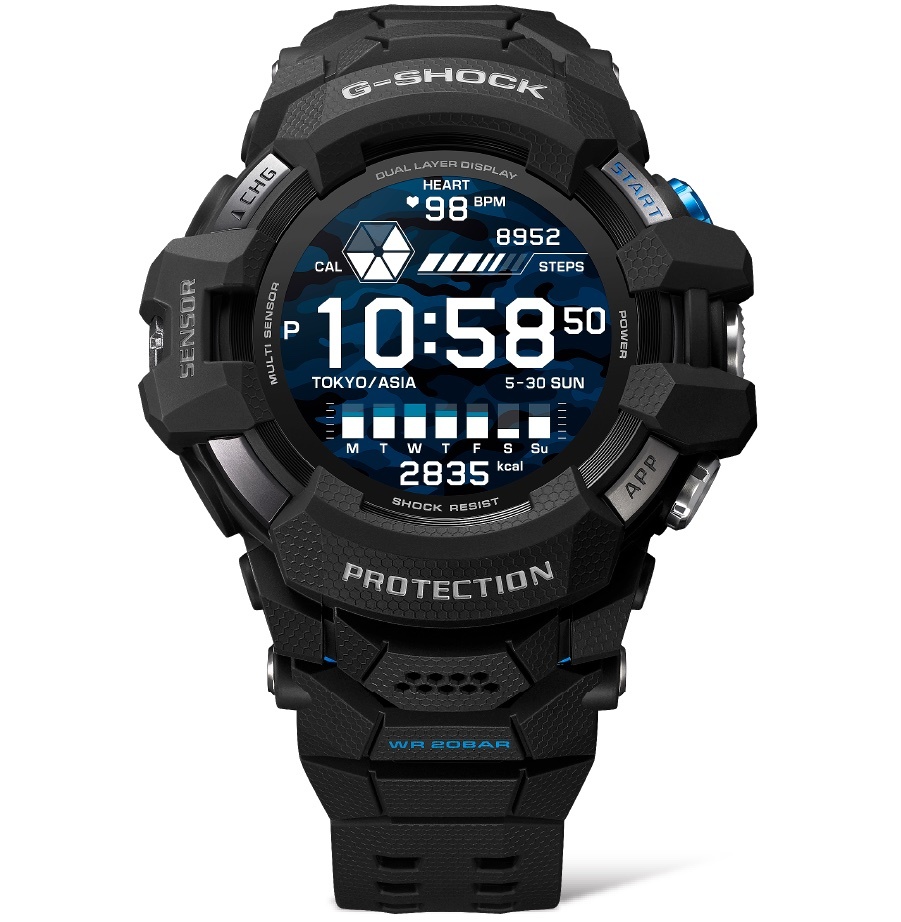 G-Shocks come in several shapes and sizes, and the GSW-H1000 is definitely toward the bulkier, more rugged end of the lineup. It feels extremely well made, has 20-bar water resistance, and is absolutely huge. It’s not really the sort of watch I would normally wear, but I do quite like the way it looks. Then again, my wife immediately laughed at it and said, “You would need to be far more into streetwear than you actually are in order to pull that off.” Which, ouch. But maybe that means Casio has pulled off the G-Shock look?

Style is, of course, subjective, and I think this watch achieves what it was going for. But if you’re into the subtler, more slimline G-Shocks like the recently popular GA-2100, just know that this very much isn’t that. While it was comfortable enough on my wrist, I’m not sure I could recommend it to people with smaller frames.

In truth, the GSW-H1000 isn’t all that different to Casio’s prior Pro Trek Wear OS watches. The focus is more on fitness than hiking this time around, but the physical proportions are similar and you still get the compass, altitude sensor, barometer, and GPS connectivity. (One major omission is any form of NFC, so there’s no mobile payments support.) The proprietary barrel charger is as awkward as ever, and Casio is also still making use of a dual-layer LCD that can extend battery life up to a month in its basic monochrome timekeeping mode.

Underneath that monochrome display is a fully circular 1.2-inch 360 x 360 LCD screen. It feels quite small relative to the rest of the watch, but it isn’t difficult to use, and I like that it doesn’t dominate the watch’s design. The bigger problem is that it just doesn’t look great compared to the OLED panels used in most smartwatches — it’s quite low in contrast and isn’t easily visible in bright sunlight. The monochrome layer, however, can be left on all the time and is much more glanceable if you don’t need to use it for anything complicated.

One slight oddity with the GSH-H1000 is that Casio included very few watchfaces. You only get an information-dense digital face, a basic analog option, and one that matches the layout of the monochrome LCD. That latter setting was my favorite because it felt less jarring shifting between always-on and active display modes. Obviously, you can download whatever watchface you like from the Play Store, but it’s clear that Casio designed this watch around the dual-layer mode.

The sense that this is more of a curated Wear OS product extends to the software, which is built around a dedicated Casio app that you activate with the bottom-right button on the watch. This handles features like the barometer and altimeter, as well as letting you access G-Shock Move, a fitness-focused app that you have to install on your phone alongside the base Wear OS app, which is a slightly awkward process. Once set up, though, G-Shock Move can be linked to Google Fit and supports a ton of activities — from paddleboarding to fishing — and I found it worked well for tracking my bike runs.

The unfortunate thing about this watch’s software is that Casio announced it right before Google and Samsung came out with the Galaxy Watch 4 and Wear OS 3, which is the biggest refresh Google’s smartwatch platform has received in several years. From Casio’s point of view, it might not be a necessary upgrade. So much of your interaction with this watch is through Casio’s own custom software, and if that’s what you’re buying it for, the underlying OS isn’t quite as important as it might be with a Wear OS Michael Kors. Even battery life concerns are mitigated somewhat because of the dual-layer screen — I got a couple of days’ use out of this watch easily in dual-layer mode.

Personally, though, I would like my smartwatch to be functional as a smartwatch, especially if I’m dropping $699 on it. I’m not about to dual-wield this thing with an Apple Watch, after all. And Wear OS 2 is really just not fit for purpose at this point. That’s why Google essentially abandoned it with Wear OS 3, which lifts features from Samsung’s much better Tizen-based watches. Casio’s customizations work well enough by themselves, but I know what I’d rather have running behind the scenes. There’s no word from Casio on whether this watch will get an update, and I wouldn’t bank on it.

The GSH-H1000 arguably has more going for it than any other Wear OS 2 watch ever made. The build quality is great, it has genuine brand cachet, and Casio has done a lot of work to improve the software and performance. If you’re a G-Shock fan who’s been waiting for a smartwatch and you love this particular design, then hey, this is it.

But it’s expensive, the styling is divisive, and it’s come at a really bad time considering the launch of Wear OS 3. Considering all of that, it’s hard to imagine this being the right watch for many people. I do think Casio is onto something here and I’ve mostly enjoyed wearing the GSH-H1000, but I have to think there’s going to be a more broadly appealing G-Shock smartwatch somewhere down the line.