Almost infinite listening, so long as the weather’s kind

Solar-powered headphones are a tantalizing prospect. The battery life of wireless models has improved a lot over the years, but it’s still far from perfect, and those wide headbands provide the perfect surface for a sheet of solar cells to provide continuous charging.

Urbanista isn’t the first company to attempt to make good on this idea — JBL announced a pair of its own in 2019 that it was subsequently forced to delay due to the pandemic — but its Los Angeles are the first solar-powered headphones to have actually made it to market. Although the design is almost identical to the company’s existing Miami headphones, a layer of Powerfoyle solar cells on the headband allows them to continuously suck up solar energy when exposed to light. Urbanista reckons the average listener should be able to go months without having to charge them up.

It’s an enticing idea, one that has the potential to remove an item from the list of devices people have to charge on a regular basis, but can it live up to the expectations? And even if it does, are these $199 (£169 / €199) solar-powered headphones worth keeping charged in the first place?

Our review of Urbanista Los Angeles 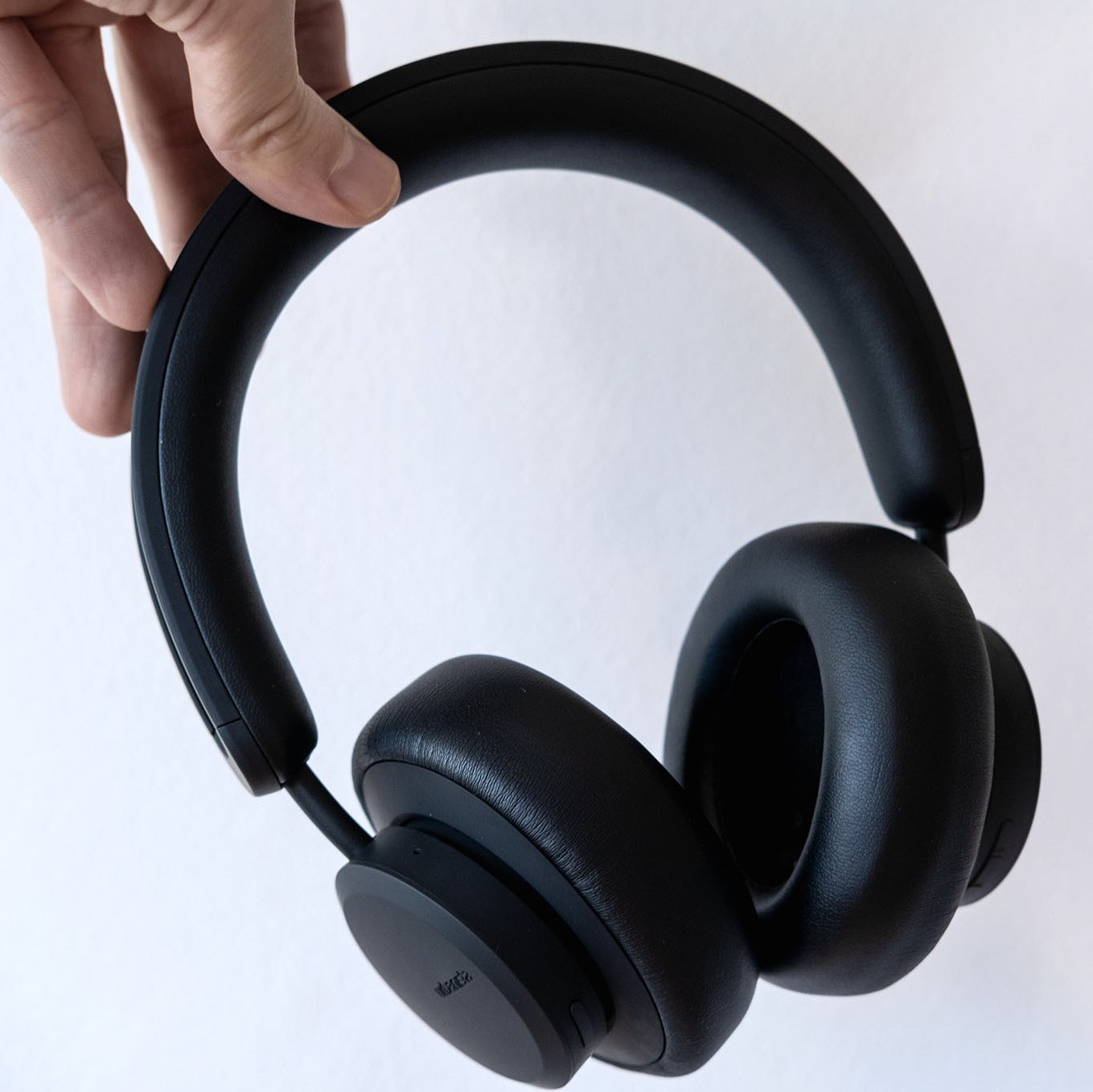 Where things get interesting are with the Los Angeles’ headband, which has a layer of Powerfoyle material produced by Exeger for capturing the light that eventually gets turned into battery power. Unfortunately, this material is black regardless of which color you opt to get the headphones in, and from the press images, I don’t think it looks great with the gold option.

For the most part, the headphones’ solar charging capabilities aren’t something you need to actively think about. They’ll automatically charge regardless of whether you’re wearing them and listening to music or whether they’re turned off (although software caps their solar charging at 90 percent to protect the battery). But if you want to get a more in-depth idea of what’s going on under the hood, Urbanista’s companion app offers a great interface that shows the headphones’ power draw versus its solar charging. There’s a lot of fun to be had messing around with the app, seeing what impact turning ANC on and off has on battery drain or how much solar power you can gain from putting the headphones in the most direct sunlight you can find.

I think the benefit most people will get from the Los Angeles solar charging is as a metaphorical parachute, slowing the battery drain so you don’t have to recharge them so often. How effective this parachute ends up being will differ a lot depending on whether you use them to listen to music inside at your desk or on the subway or whether you wear them while out and about in a sunnier part of the world. But as a baseline, listening to them in a pitch-black room with ANC off should get you 80 hours of listening.

In my experience using them on cloudy fall days in the UK, I generally saw Urbanista’s app reporting either minimal power drain or else adding an almost equal amount of power to the amount being consumed. It was less common for me to see the headphones actually gaining power as I used them, but this did happen when I used them in direct sunlight (as you can see from the screenshot above).

The times when I saw the headphones gaining the most power from solar charging were when they were sitting unused in the sun. I’m sure you could get into the habit of leaving them on a sunny windowsill, positioned so that the headband was pointing directly at the sun to maximize the benefit, but if you’re going to make that effort, then you might as well plug them in. The beauty of the Los Angeles headphones is that you don’t really have to think about it, and obsessing over leaving them to charge in the sun feels like it’s missing the point.

After two weeks of listening for a couple of hours a day, including while sitting at my desk next to a west-facing window, as well as on the London Underground with ANC on, Urbanista’s app reports that I’m still at 81 percent power. It’s an impressively small amount of battery drain, even while I used them in situations with no natural light or in overcast conditions.

I don’t think anyone’s going to get away with never having to connect the Los Angeles headphones to a USB-C charger. But based on my experience, I could see them lasting for a month or more of regular usage during winter and even longer if you’re using them in sunnier conditions.

Apart from the solar cell-equipped headband, the Los Angeles look and function like a typical pair of wireless noise-canceling headphones. Their controls will look familiar to anyone who’s used a pair of wireless headphones in the past five years. On the right earcup, there’s a trio of buttons for volume up, down, and a middle playback control button that also turns the headphones on and off. On the left, there’s a customizable shortcut button that responds to either a short or long-press to toggle noise cancellation, transparency mode, or a voice assistant.

It’s a sensible selection of buttons; I just wish the volume controls weren’t so stupidly close together. You can learn to live with them, but just a little more spacing would make that pause button much easier to feel with your finger in a pinch. It would also have been nice for there to be a dedicated shortcut to put the headphones into pairing mode rather than having to manually disconnect from a previous device first.

On the left earcup, there’s a USB-C port for when the sun’s rays aren’t enough to keep these headphones charged, but unfortunately, there’s no 3.5mm jack for wired connections. Urbanista tells me it omitted the physical jack to keep the headphones’ power consumption as low as possible. In fairness, the Los Angeles’ battery life is 30 hours higher than Urbanista’s Miami headphones, which “only” deliver 50 hours, suggesting that these power optimizations have worked. But a 3.5mm option would still be useful for in-flight entertainment or work calls where I don’t want to risk a Bluetooth disconnection, and it’s a shame the Los Angeles don’t have this flexibility built in.

Away from the sunlight and into the bowels of London’s Underground network, I was pleasantly surprised by the Los Angeles’ noise canceling performance, which fairly successfully drowned out the screeching of the tube as it flew through subway tunnels. It’s not as capable as class leaders like the AirPods Max or Sony WH-1000XM4, but I think the level of ANC offered by the Los Angeles is good for the price.

The ability of the Los Angeles to cancel out noise is helped by the fact that they fit snugly on your head while you wear them. They were initially so snug that they were uncomfortable to wear during my first few days of use. But as the headband softened over the course of two weeks, the headphones turned from “uncomfortably snug” to just “snug” on my slightly large head. If you have a chance to try them on before you buy them, I’d take it. Just to be safe.

The Los Angeles offer a rich, rounded sound that has a lot of impact. Listen to techno, like the recently-released 7 Songs by Humanoid, and the thumping bass line has weight and impact but manages to stay just shy of becoming overwhelming. But switch to something more layered, like Bloc Party’s We Are Not Good People, and the limitations of this bass-first approach become more apparent. The Los Angeles just don’t leave that much space for the rest of the track to make itself heard, and in the case of Bloc Party’s track, you lose some of the definition and crackle of the overdriven guitars in the process.

The Los Angeles don’t sound bad by any means. Far from it — they’re a very listenable pair of headphones. But their sound has a weight to it that can squash more delicate parts of a track. There are far worse headphones around for this price, but if you’re yearning to hear every last bit of detail in a song, then the Los Angeles aren’t interested in providing it to you.

Making a pair of headphones that can be charged by light without looking like they can charge by light is no small feat, and the biggest compliment I can pay the Los Angeles is that they integrate this functionality so seamlessly that you basically forget they’re able to solar charge at all. That is, until you look at their battery level after several days of use and discover it’s only gone down by 10 percent. The only significant compromise is the lack of a 3.5mm port for optional line-in listening. For some people, this won’t be an issue. For others, it’ll be a dealbreaker.

As a pair of headphones, the Urbanista Los Angeles make a couple of missteps. Their controls could be clearer and more spaced out, and their fit could be more comfortable on larger heads. But they ultimately succeed at being a very listenable pair of headphones, even if their sound quality can’t compete with more expensive pairs from the likes of Sony and Sennheiser.

You can use Urbanista’s Los Angeles over Bluetooth without clicking through any agreements. But if you want to use the Urbanista app, which lets you customize its controls and see its power drain solar charging data, you’re agreeing to: