It’s been nearly three years since Amazon has updated its best (and bestselling) Kindle: the midtier Kindle Paperwhite, which is getting its biggest upgrade ever. On paper, at least, Amazon has finally built the ultimate Kindle.

The last Paperwhite update was a relatively minor one, with just a light design tweak and waterproofing serving as the main addition. The new Kindle Paperwhite refresh, on the other hand, adds nearly every update you could imagine for a hardware refresh: a bigger screen, wireless charging, USB-C, adjustable color temperature, and additional LEDs for more consistent backlighting. 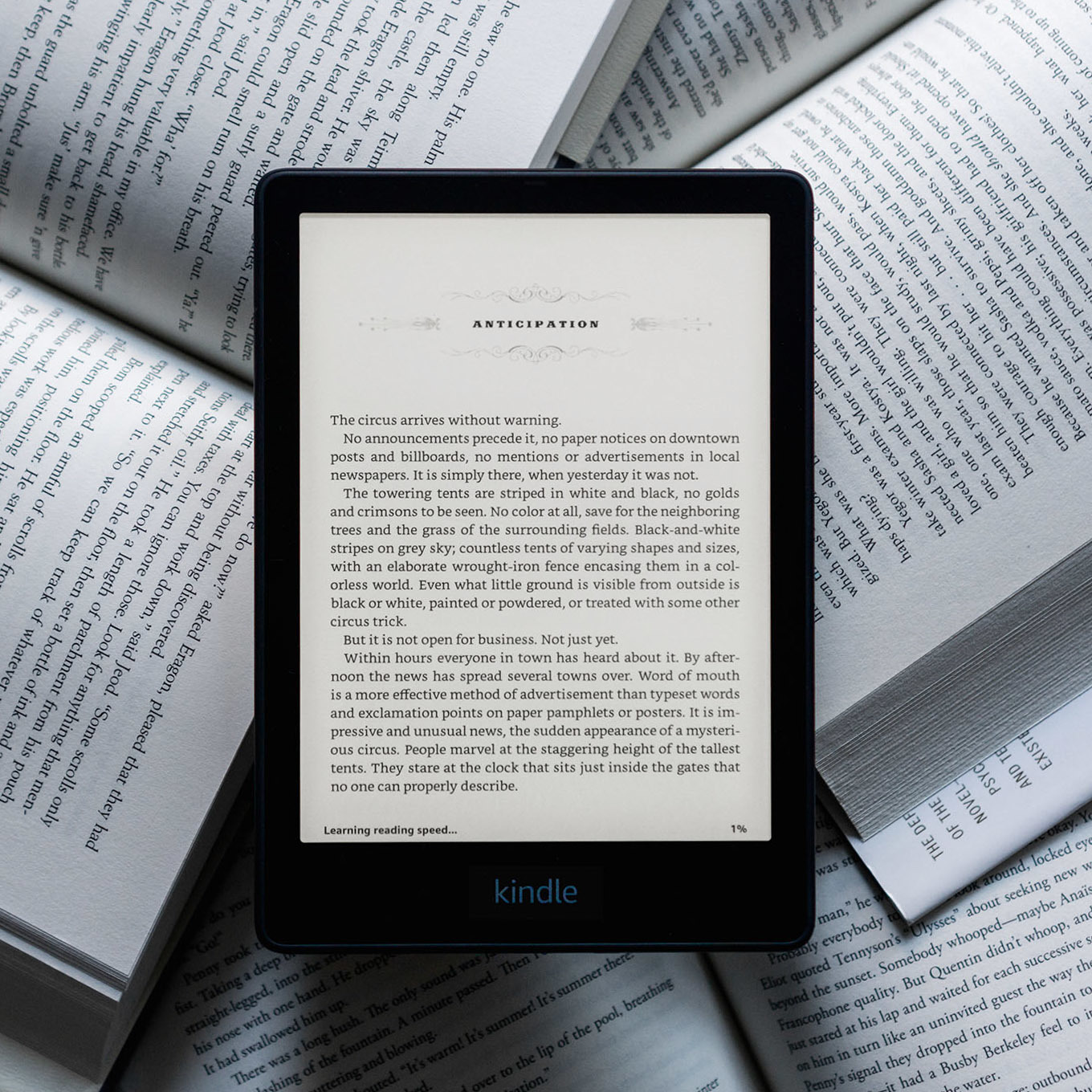 There are actually two different versions of the new Paperwhite this time: the standard model and the “Signature Edition,” which adds wireless charging, a sensor to automatically adjust the backlight, and four times the storage (32GB, compared to 8GB on the regular model).

The regular Paperwhite costs $139.99, or $159.99 without lock screen ads, while the Signature Edition costs $189.99 (without ads, there’s no option to get a discount for viewing ads on the fancier model).

I’ve been testing the Signature Edition for the last week; whether it justifies the extra cost will depend on how important those differences are to you. The additional storage and the automatically adjustable backlight are excellent additions; Qi charging is a little less useful, given that the new Paperwhite needs charging so rarely and charges much faster over USB-C than it does over wireless charging. Plus, you’ll need a pad that actually fits the Paperwhite, which can be difficult if you prefer phone-sized chargers (especially vertically oriented standing ones.) I suspect most people will be fine with the standard models, but if you store a lot of books (and especially audiobooks), really prefer the automatic backlight, or are already shelling out to remove Amazon’s onerous ads, it might be worth the extra money.

The broad design is largely the same as the old Paperwhite: a flush-mounted touchscreen, a grippy rubberized back, a gray “Kindle” logo on the bottom bezel, and the excellent IPX8 waterproofing that was the standout feature of the last generation. They’re easy to tell apart, though, thanks to the larger screen of the 2021 model.

The additions here mean that the differences between the $249.99 Oasis and the $139.99 Paperwhite are slimmer than ever. Of those, the most notable is the LED count — the extra LEDs let the Oasis light up even brighter, but it’s not a difference worth paying nearly twice as much for on its own. The 2021 Paperwhite gets plenty bright, and I only even noticed the difference by comparing them head to head in a dim room.

Oddly, though, Amazon is also using the Paperwhite to debut several new features to the Kindle lineup, something that it typically does the other way around (with premium upgrades coming first to the Oasis and then later to the other models). Presumably, Amazon will have an updated Oasis down the line that brings it back to parity with the Paperwhite, but right now, Amazon’s midrange model is strangely its most technologically advanced.

The 2021 Paperwhite is also finally Amazon’s first Kindle to come with USB-C charging, which allows for fast-charging the device and — more importantly — actually being able to use the same cables as most other modern devices. The lengthy battery life means that you still won’t be charging it that often, but it’s another big step for many (myself included) to finally be able to excise Micro USB cables from my life.

The new Paperwhite features one of the most notable design changes for the e-reader model in its nearly decade-long history. For the first time for the Paperwhite, Amazon has increased the display from a six-inch panel to a 6.8-inch display by slightly increasing the Paperwhite’s physical size and slimming down the bezels around the screen a fraction.

The display still has the crisp 300ppi resolution that the old model had, despite the larger size. The new design with its reduced bezels (particularly on the top of the display) looks better than ever, and the added screen space for reading is a welcome addition, as are the color temperature options for better emulating the color of actual paper. As was the case with the Oasis’ implementation of the feature, there’s still no option to have the Kindle automatically adjust temperature in response to ambient lighting, which is disappointing to see (especially since it can automatically adjust brightness).

But by increasing the display size, Amazon might have made the Paperwhite too big. The new model is about a third of an inch taller and wider than the old model and about 26g (almost an ounce) heavier than the 2018 model. And while that may not sound like much, it’s just enough for it to be awkward to hold up with one hand, even for someone like me with relatively large mitts. I often have to brace the new Paperwhite with a second hand to comfortably read it, something I didn’t have to do with the old model.

Amazon might have made the new Paperwhite too big

It’s not a total dealbreaker, but the increased size and weight had me worried a lot more that the Paperwhite was going to tumble out of my hand when I was holding it. (It’s a problem unique to the bigger Paperwhite’s otherwise unchanged design. The Oasis, after all, has an even bigger display but avoids the issue by offering an asymmetrical design aimed toward one-handed use.) It still barely fits in the back pocket of a pair of jeans, but only just.

Ultimately, given the choice, I’d rather Amazon had gone with the more streamlined design in a way that kept the physical dimensions the same (or even smaller) rather than trying to fit in an ever bigger screen. It’s a personal preference, though, and I suspect that many Kindle readers who just want more screen real estate may not be bothered by the added bulk.

Amazon says that it’s boosted the battery life on the new Paperwhite, from the previous six weeks up to 10 weeks on a single charge (which requires using the device’s “Power Saver” mode that trades longer battery life for longer waking up from sleep). I’ve only had the Paperwhite for about a week, so there’s no earthly way for me to verify that claim, but I haven’t had any issues with battery life yet — in the six or seven hours I spent reading, I only saw the battery drop a percent or two, even in “standard” battery mode (although battery life will depend on how much you read, how many times you turn the page, and other factors like screen brightness).

The company also says that it’s put a new and more powerful processor on the 2021 model, which helps to speed up virtually everything. Books open faster, pages turn faster, and scrolling through one’s library is no longer the interminably laggy experience it once was on the older model.

The 2021 Paperwhite also ships with Amazon’s new Kindle software, which it debuted earlier in the fall. There are a lot of useful new additions here, including a new home layout that puts recently read books front and center, along with better integration for (Amazon-owned) Goodreads reading lists. The new software also makes it easier to jump back into whatever book you’re currently in the middle of from anywhere using the toolbar on the bottom of the screen. Additionally, there’s a new setup mode that allows you to share login information over Bluetooth from the Kindle app on your smartphone, instead of fighting against the E Ink display to type in your Amazon credentials and Wi-Fi password.

More importantly, though, the new software makes it much easier to access the swipe-down menu. Amazon has taken a cue from literally every smartphone from the last half-decade and added a swipe-down menu accessible from anywhere on the Kindle’s OS that offers toggles for things like airplane mode, Bluetooth, dark mode, and sync settings, as well as sliders to adjust brightness and color temperature.

The new software emphasizes the Paperwhite’s main goal: a pipeline for Amazon’s ebook store, for better or for worse. There’s more prominent placement of recommended Kindle books to buy on the homescreen now, which can’t be hidden. But at the same time, Amazon hasn’t improved things like the on-device experience for library lending services like OverDrive or Libby, which remain as clunky as ever and wholly dependent on using a smartphone or computer to actually borrow books.

As with most Kindle upgrades, if you already own the 2018 Paperwhite, there’s not enough here to be worth shelling out the money for a new upgrade. The larger display is certainly nice but comes with its own drawbacks in the form of a harder-to-hold device. And while USB-C and wireless charging have been at the top of the list for Kindle upgrades for years, neither is worth the investment of an entirely new device. At its core, the reading experience on the new Paperwhite is still too similar to the old model to recommend existing owners rush to upgrade.

But if you’re buying a new Kindle today for the first time or replacing an aging model, the new Paperwhite is the best hardware that you can buy — possibly the best hardware on any e-reader right now, period. But even as the Kindle’s hardware is getting better than ever, it’d be nice to see Amazon’s software reach a similar level, something that the economics of the Kindle ebook store make a very unlikely possibility.

The end result is one of the best e-readers ever — so long as you can tolerate living within the increasingly high walls of Amazon’s library.