Share All sharing options for: Honor 50 review: lose a Huawei, gain a Google

It’s rare that you need to get into geopolitics at the outset of a smartphone review, but it’s impossible to avoid with the Honor 50. It’s the first Honor-branded device to release outside of China since the brand spun out from parent company Huawei last year. It means that despite Huawei’s continued presence on the USA’s entity list, Honor is now able to include Google’s apps and services on a new phone.

Having access to these services, which include critical parts of the Android ecosystem like Google Play in addition to apps like Google Maps and YouTube, means that the Honor 50 is the first Honor phone in years to actually have a shot at being a viable purchase for customers outside of China. Its midrange starting price of €529 (about $616) doesn’t hurt, either.

But while leaving its former parent company has opened a Google-shaped window for Honor, it’s also closed a Huawei-shaped door. Honor is now on its own, without the backing of one of the most well-resourced technology companies in the world. As a result, while not a bad phone, the Honor 50 ends up not feeling competitive with other handsets in its price range.

Our review of Honor 50 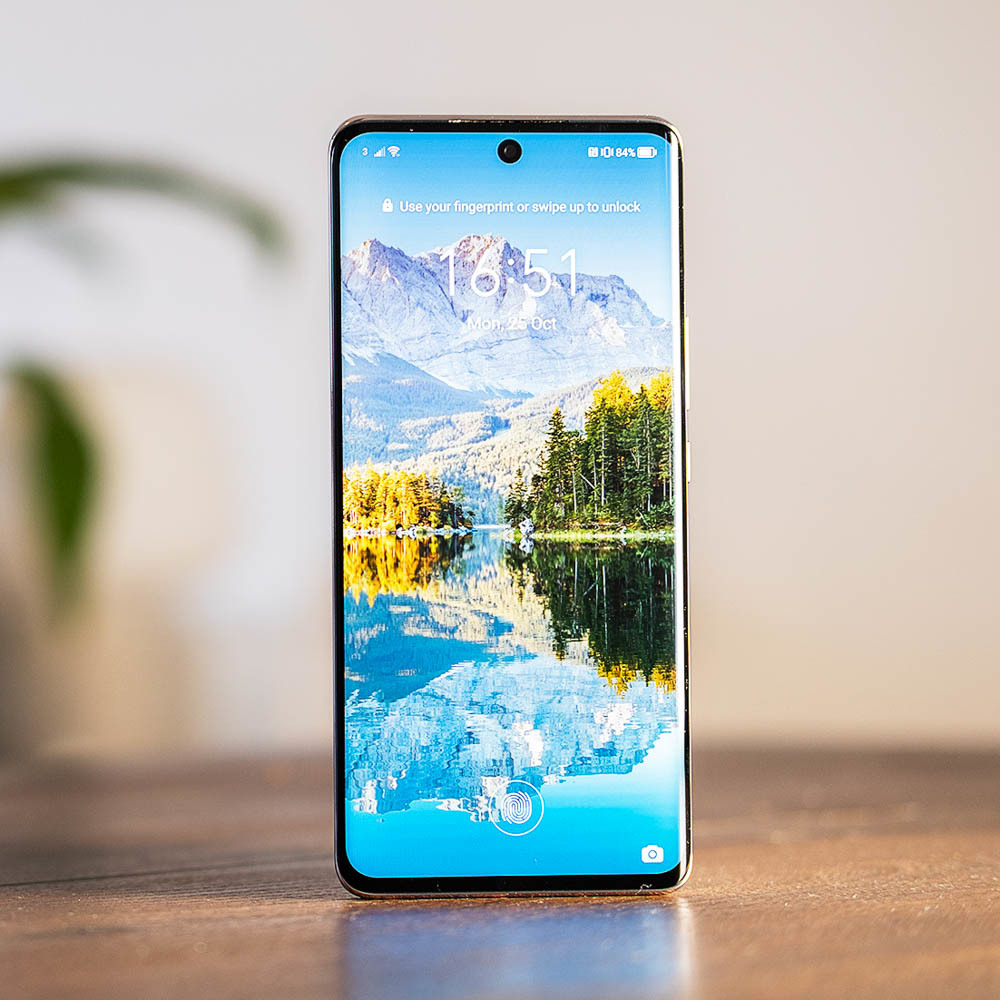 You get the choice of 6 or 8GB of RAM

Honor’s phones have always been available with loud designs, and the Honor 50 is no different. My model came in a shiny white colorway, with the letters “HONOR” tiled across its back, and there’s also a garish sparkly silver color option available alongside more conventional black and green options. While I don’t love the color options, I think Honor deserves credit for its approach to the dual-ring camera bump on the Honor 50, which is a lot more interesting than the generic rectangles found on the backs of most devices (Huawei’s Nova 9 uses a very similar design, which Honor says is because the design was developed before the split).

Around front, the Honor 50 has a 6.57-inch 1080p OLED display, with a 19.5:9 aspect ratio and a small centrally orientated hole-punch notch for the phone’s 32-megapixel selfie camera, which moderately curves around the left and right edges of the phone. I can’t fault the screen’s rich blacks or vibrant colors, and the under-display fingerprint sensor is fast and responsive. If you don’t like curved displays, then you won’t like the Honor 50’s, but at least the phone doesn’t suffer from any palm-rejection issues.

The Honor 50’s screen has a 120Hz refresh rate, which makes it feel fast to use and smooth to look at, and the Snapdragon 778G processor happily keeps up, even while the screen quickly scrolling through visually intensive apps like Twitter. I had no problems with performance during my time with the phone.

There’s no IP-rating and no wireless charging

The rest of the specs are more basic. There’s no IP rating for dust and water resistance and no wireless charging, and when it comes to audio, the phone outputs sound from a basic downward-firing speaker. It’s loud enough for listening around the house, but you’ll be reaching for a pair of headphones in noisier environments. Honor includes a pair of USB-C headphones in the box, which is fairly unusual these days, and almost makes up for the lack of a headphone jack.

Honor’s Magic UI software, which runs atop of Android 11 on the Honor 50, is broadly inoffensive. However, it has its annoyances and, by default, is set up in a way that I think most people are going to want to tweak. For starters, it uses Microsoft’s SwiftKey rather than Google’s Gboard keyboard that I think most Android users will be more familiar with. There are also a ton of stock Honor apps that I disabled in my first couple of days with the phone, and I don’t love the way Honor’s software defaults to eschewing Android’s typical app drawer for an iOS-like homescreen. It’s easy enough to rectify with some tweaks, but it feels a little cumbersome.

I had no complaints with the battery life of the Honor 50, averaging a little over seven hours of screen on time between charges. I never had to put the phone on to charge at the end of the day with less than 40 percent charge remaining. The Honor 50 supports 66W fast charging via an included charger that’s branded as Honor’s own “SuperCharge” charging standard, which isn’t compatible with third-party chargers. Honor claims the included charger can get the phone from 0 to 100 percent charge in 45 minutes (unfortunately, my review sample came with an EU plug, so I was unable to verify this claim myself). But a full charge in under an hour is nothing to be sniffed at.

The headline camera specs of the Honor 50 appear to be impressive at first glance, but the devil’s in the detail. Yes, it’s a 108-megapixel quad-camera array, but there’s no telephoto camera, and beyond the main sensor, the three additional cameras are a comparatively low-resolution 8-megapixel ultra-wide angle, a 2-megapixel macro, and a 2-megapixel depth sensor.

Things don’t get off to a great start with the Honor 50’s main camera. Even in daylight, there can be a distinct lack of detail in its shots, like in the shot of the black cat above, where there’s very little definition or texture in its fur. Colors are vibrant at the risk of being a little oversaturated, and faces come out looking a little too bright and textureless. White balance is at least pretty natural, and I think selfies come out generally looking OK, helped by the fact that there’s an easily accessible shortcut to turn on background blurring and a beauty mode slider (if that’s a feature you’re interested in).

Low light performance leaves a lot to be desired, where the Honor 50 produces shots that are dark and muddy. But the bigger problem is that the phone takes way too long to take photographs in low light. When trying to take a shot of a group of people at a party, the Honor 50 refused to take a photo for several agonizing moments, which is far longer than people at a party are willing to wait to have their photo taken for.

At its starting price, the Honor 50 is a comfortably midrange device. But there are a lot of accomplished smartphones available at similar prices. Phones like the OnePlus Nord 2 (€499 for its step-up 12GB RAM / 256GB storage model) or the iPhone SE (€539 for its 128GB storage variant) are both excellent phones that offer a much more rounded experience than the Honor 50. And if you’re considering the Honor 50 with 8GB of RAM and 256GB of storage, then you’re just €50 away from the recently announced Pixel 6.

It’s a crowded part of the market, and simply having access to Google’s apps and services isn’t enough to make an impact. Honor’s software can feel bloated, and its camera is sluggish and lacking in detail. Speedy 66W fast charging and a slick 120Hz display aren’t enough to distract from the fact that the Honor 50 has some weak spots when compared against the best midrange handsets available.

Honor might be a viable purchase now that it can once again include Google’s apps and services on its devices. But it has more work to do if it wants to be truly competitive.

To use the Honor, you need to agree to: