Beats has been busy. After releasing the Studio Buds earlier this year, today the Apple-owned brand is back with the more premium Beats Fit Pro wireless earbuds. It’s unusual to see two completely new products from Beats in a single year, but perhaps the company is trying to make a point that it’s not idly sitting by and playing second fiddle to Apple’s AirPods and AirPods Pro. If anything, the $200 Fit Pros demonstrate that Beats has found its focus.

The Fit Pros are a wonderfully designed pair of earbuds that integrate the best of Apple tech. They’ve got active noise cancellation that’s on par with the AirPods Pro. The same spatial audio with dynamic head tracking. The same Adaptive EQ. They even have the brand-new skin detect sensor that only just debuted in the third-generation AirPods. There’ve been many questions about where Beats fits into Apple’s long-term plans, and while a single product can’t really provide an answer to that, the Fit Pros are solid evidence that this brand isn’t being pushed to the wayside anytime soon.

Our review of Beats Fit Pro 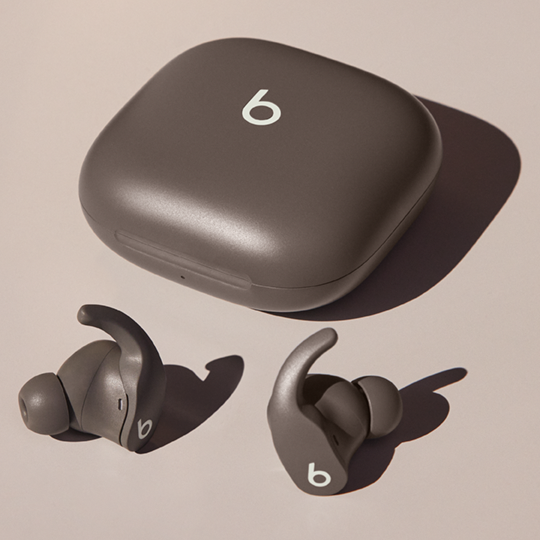 When I reviewed the Studio Buds, I praised their ambition and Beats’ attempt to cater to Android users as much as iPhone owners. But despite their great comfort, good sound, and compact design, those earbuds had some key missing features and fell a bit flat on execution. Not so with the Beats Fit Pros. They’re exactly what you’d want them to be.

These are the best earbuds Beats has ever made.

As Beats explains it, the Fit Pros are meant to fill a gap in its lineup between the Studio Buds and Powerbeats / Powerbeats Pro. Their wing tips make them more gym-ready than the Studio Buds, but they don’t go as far as including the Powerbeats’ signature hooks that wrap around your ears. I have marathon runner friends who swear by the ear hooks and say nothing comes close to that stability for vigorous activity. But Beats thinks it has found a great alternative with the Fit Pros — all in a design that’s much more compact, lightweight, and comfortable than the Powerbeats.

The Fit Pros come in a case that’s basically a miniaturized version of the Powerbeats Pro case. Just as with those, there’s no wireless charging — a very frustrating omission at this price — but the case at least uses USB-C instead of Lightning. A longstanding gripe with the Powerbeats Pro is they can be finicky with charging unless you place them in the case just right. Their ear hooks make it easy to get this wrong, and on many occasions I’ve gone to use them only to find one earbud fully charged and the other completely drained. I’m happy to say this isn’t something you need to fret about with the Fit Pros: each earbud drops into its cradle with a reassuring magnetic pull and I’ve experienced zero charging mishaps. The lid has a little more play than I’d like, but I can be nitpicky about that sort of thing.

As for the buds themselves, they’ve got a unique look thanks to their permanent, curved wing tips. Beats is selling them in black, gray, white, and a pinkish purple. The gray and purple have gotten the best feedback among Verge staff. At 5.6 grams per earbud, they weigh in slightly heavier than the AirPods Pro but lighter than some fitness-geared buds like the Jaybird Vista 2s. The new Jabra Elite 7 Active buds are a hair lighter at 5.5 grams. Regardless, the Beats are extremely comfortable and also have microventing to alleviate ear pressure buildup.

Beats is very proud of how much it crammed into the Fit Pros, which have the company’s smallest enclosure yet — not counting the wing tips, obviously. They contain 30 percent more components than the Studio Buds and the transducer is 15 percent larger. Three sizes of silicone ear tips come in the box, along with a short USB-C cable.

But what about those wing tips? They’re meant to help the earbuds stay put. But I’ve found that on some earbuds, like the second-gen Pixel Buds, these wing tips and numbs can cause discomfort the longer you wear them, so there’s definitely a risk in Beats making them a permanent part of the design. But the company says it sweated the details over the wing’s shape and material. And after several days spent testing the Fit Pros — often for several hours at a time — I haven’t noticed any soreness. The wing tip is flexible and pliable enough that it doesn’t press into the concha of your ear in an annoying way. You’ll feel it there during extended listening, don’t get me wrong, but at most it produces a little itchiness instead of more serious irritation. And you can alleviate that just by adjusting the earbuds.

Beats says it designed the wing tips for “every ear imaginable,” but ears are all different, and there will always be exceptions. That said, I let several people try the Fit Pros and even those with small ears could find a way to make the wing tip work for them and said it resulted in a more steady overall fit. They passed the gym test and didn’t come even slightly loose during high intensity runs. They also stayed in while eating, something that’s a challenge for many earbuds. The Fit Pros are rated IPX4 for water and sweat resistance, which is adequate for workout purposes, but below the IP57 of Jabra’s latest active buds.

Like the Studio Buds, these have a nice and clicky “b” button on each earbud with the usual control scheme: press once to play / pause / answer call, twice to skip to the next track, and three times to go back. But there’s one interesting tidbit: for the first time, you can remap a long press to adjust volume instead of toggling noise cancellation or summoning Siri. This can be done right in the iOS settings menu and is something that the AirPods Pro can’t do, nor can the Beats Studio Buds. I like having the option, even if I ended up sticking with the defaults. Bring that remapping capability to your other earbuds, Apple.

Beats has outfitted its latest earbuds with 9.5mm drivers, and they produce very satisfying sound quality that I’d rank above the AirPods Pro. This isn’t the bloated bass Beats of old: the company shed that reputation quite a long time ago. The Fit Pro buds might have slightly less overall boom and oomph than the Powerbeats Pros, in fact, but switching back and forth between the two, it was close — and I preferred the more refined sound of the newer buds. If there’s one weakness I’ve noticed, it’s maximum volume. The Fit Pros seem to have a lower volume ceiling than some of their competitors, so if you tend to crank things up for motivation during a run or fitness routine, you might be underwhelmed.

Unlike the Studio Buds, which didn’t have Apple’s usual earbud chipset inside, the Fit Pros have the H1 and all the features that come along with that. The main benefits are:

Beats notes that a lot of other functionality — ANC, transparency mode, one-step setup, Apple Music spatial audio (minus head tracking) — works just as well on Android as on iOS. You’ll need the Beats app for some things like control customization and more detailed battery status. The Studio Buds supported Android’s native Fast Pair feature, but the Fit Pros do not. That’s not surprising considering there’s once again Apple silicon inside. But it means that there’s an extra layer of seamlessness when using the Fit Pros within Apple’s ecosystem. You can get most of the way there on Android, but not quite.

As I mentioned earlier, the Fit Pros essentially have the same noise cancellation system as the AirPods Pro — also powered by the H1 chip. Performance between the two is more or less identical, and transparency mode sounds natural here in the same way it does on the Pros (with the same sound effects as you switch between modes). When ANC is off, Beats refers to this as “Adaptive EQ” mode. That’s where you’ll get the best battery life: seven hours of continuous playback and up to 30 hours including case recharges. Using ANC or transparency drops those figures to six hours and 27 hours, respectively, so you’re not losing much no matter how you’re using the buds. Beats says you’ll get an hour of playback (with ANC) from a quick five-minute top off, and fully recharging both earbuds and the case takes around 90 minutes.

The Fit Pro buds also include Apple’s new skin detect sensor, first seen in the latest AirPods, for more accurate automatic play / pause when removed from your ears. This sensor can tell the difference between skin and other tight confines like pant pockets, so the earbuds are less likely to resume playing when you don’t want them to.

Voice call performance is quite good but falls short of the AirPods. If you’re wearing one of the earbuds alone, three mics are used for voice calls. When both earbuds are in use, the voice system leverages five mics. The Fit Pros utilize beamforming mics and voice detection algorithms to help isolate your voice from background commotion. My co-workers heard me loud and clear on Zoom calls, and people I chatted with on the phone said I sounded fine, if slightly less pronounced as when using the AirPods.

You can use the Beats Fit Pro out of the box without agreeing to anything by pairing them over Bluetooth as usual. However, most people will use them with an Apple device, meaning you’re subject to Apple’s privacy policy.

Additionally, if you install the Beats Android app, you’re asked if you want to automatically send analytics data to Apple. “Apple collects information about your Beats app and Beats product, such as the software versions, device rename occurrences, and device update success and fail rates, in order to improve the product.” Apple says none of this data allows the company to personally identify you.

The Fit Pros successfully thread the needle between everyday and fitness-focused earbuds. They’re objectively a better choice than the AirPods Pro for workouts and running, and they handle more casual listening equally as well. They improve upon the lackluster noise cancellation that dragged down the Studio Buds, and they restore Apple’s full arsenal of ecosystem tricks. They also bring back features that Beats left out last time like in-ear detection. Making wing tips part of the core design was a gamble, and there will no doubt be cases where that decision causes issues for some people. All I can say is these are among the most comfortable wing tips I’ve ever had in my ears — and they succeed at their purpose of keeping the Fit Pros locked in place.

If you already own a set of AirPods or bought the Studio Buds earlier this year, these aren’t a must have. But if you’ve been searching for something worthy of replacing your Powerbeats Pro, the Beats Fit Pro might just be the ticket. They’re the sporty AirPod Pros a lot of people have been waiting for.