Finding a good budget 5G phone seems as elusive as finding a unicorn these days. Not only do manufacturers have to keep the price as low as possible, but the device also has to pull off some advanced 5G-compatible technologies. No wonder phone makers tend to compromise on other components, and the overall experience takes a hit as a result.

This is where I find the Nokia G50, the $300 phone that Nokia pitches as an affordable 5G-phone alternative. While the Nokia G50 is a solidly built phone with a minimalist, no-nonsense Scandinavian aesthetic, it has many flaws that I haven’t experienced in a modern smartphone in a long time. Its entry-level 5G processor lags, its low-resolution touchscreen requires more effort to use than others, and I even had some connection issues with my 4G T-Mobile service on this phone.

These are significant trade-offs for a device that is not the only $300 5G phone in town, assuming you need 5G connectivity at all. There is the $300 OnePlus Nord N10 5G that is a T-Mobile exclusive, the newer and cheaper $239.99 OnePlus Nord N200 5G, as well as the $279 Samsung Galaxy A32 5G. It’s hard to see how the Nokia G50 could possibly stand out from this increasingly crowded, budget 5G space.

Our review of Nokia G50 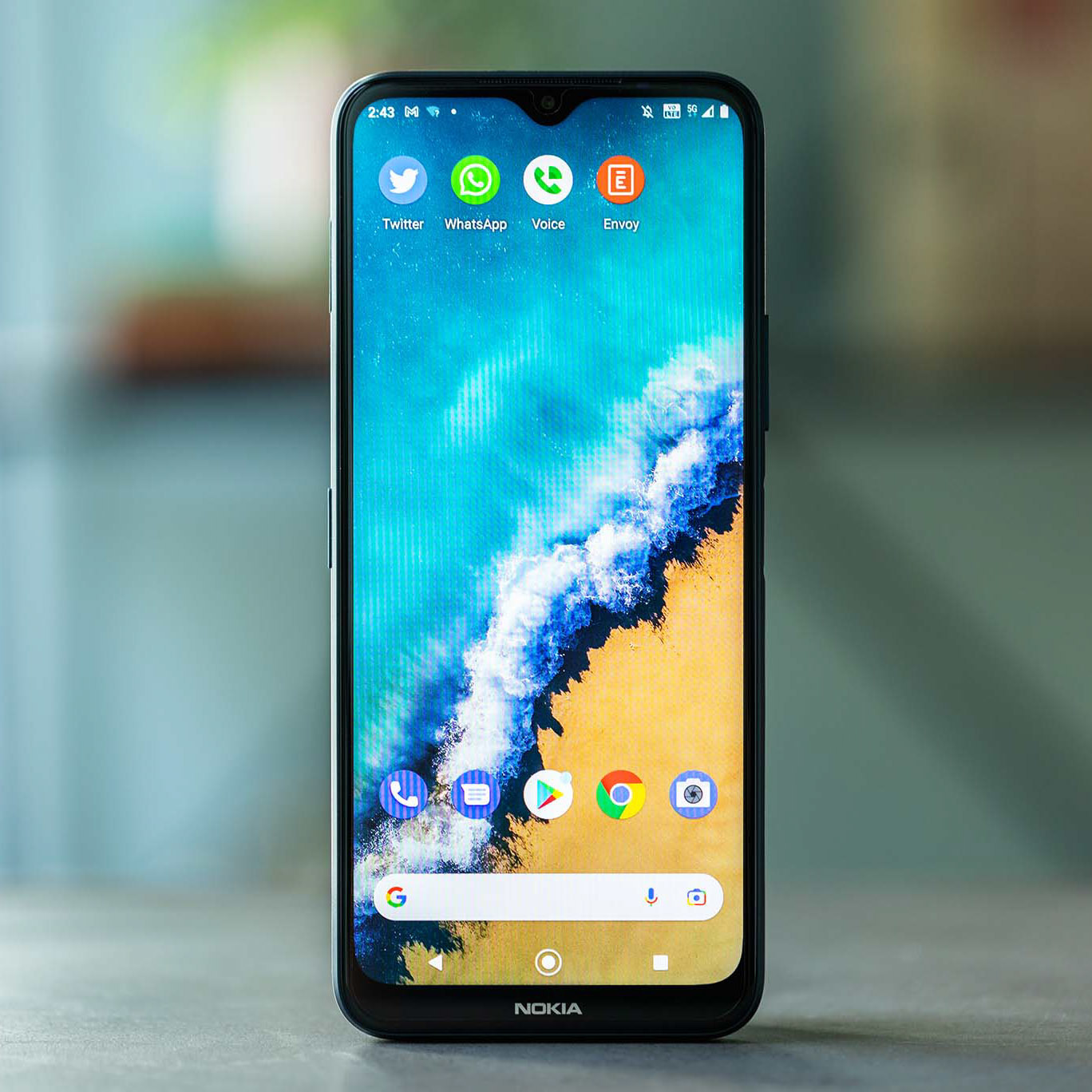 Heavy. That’s the first word that comes to mind when holding this 6.84 x 3.06 x 0.35-inch phone that weighs 7.76oz (220g), which is heavier and taller than the Pixel 6 Pro (7.4 oz; 210g). While I appreciate that its stainless steel-framed body is a rarity in smartphones these days (other than the much more expensive Pro-model iPhones), this phone is too heavy to hold with just one hand for long. Its sharp edges dig into my palms due to its heft and make me eager to put the device down.

As classy as that Ocean Blue matte ombre looks, the G50’s smooth polycarbonate coating is a sucker for finger smudges and makes the phone way too slippery to use without a case. I can’t tell you how many times the phone has slipped off a table or countertop, thanks to a combination of its slippery back and the vibrate mode. My review unit only survived the falls because it’s built like an indestructible tank.

Its durability is definitely a plus since Nokia (and brand licensee HMD Global) expects you to keep this Android 11-running phone for longer and is committed to providing two years of OS updates and three years of security updates. This is not as impressive as it sounds: the $279 Samsung Galaxy A32 5G provides four years of security updates, which is the longest out of this class.

Like other Nokia Android phones, the G50 has a non-customizable Google Assistant button and a combination SIM and microSDXC tray on its left side, a volume rocker, as well as a power button embedded with a fingerprint sensor on the right. It has a 3.5mm audio jack on top for your wired headphones or mic, as well as a USB-C port and a mono speaker at the bottom. Because the speaker is located on the bottom right corner, it’s easy for your hand to cover the sound. When listening to the Succession theme song from the HBO series, the opening percussion track sounds more muffled and buzzy on the Nokia, whereas each beat sounds clear and distinct on the OnePlus 9 Pro.

One of the ways Nokia cut corners with the G50 is by using a 720p low-resolution display.

The G50’s 6.82-inch, 720 x 1560 LCD display is simply too big for so few pixels to produce sharp, high-resolution content. Although its IPS LCD panel does offer good viewing angles with vibrant colors, it doesn’t make up for its low-resolution or 252ppi pixel density. It’s a fine screen for reading emails and social media posts, but there is a noticeable difference when looking at multimedia content. The Verge’s 10th Anniversary image with the stacked motherboards, for example, looks pixelated and has blurred edges at maximum zoom on the Nokia phone, but lines still look sharp on the OnePlus 9 Pro, even when completely zoomed in.

Not only does the G50 have a low-resolution screen, but it’s also not as touch-sensitive as other modern phones, where you only need to lightly brush the display to navigate the interface. When I was playing Pokemon Unite, for example, I had to exert more force with each of my swipes to move my character along the battlefield. It’s not a deal-breaker, but it makes this phone a little less enjoyable to use.

The G50 comes pre-installed with a screen protector, which explains the weird horizontal streaks that run across the screen when the phone is off, as well as the slightly raised edge around the display. The screen protector looks invisible when the phone is on, but if you’re looking at a video with a significant black frame around it, random sightings of this layer can be distracting.

The Qualcomm Snapdragon 480 5G processor may be responsible for making the Nokia G50 one of the few $300 5G phones around, but it might just be too underpowered for its ambitions.

Despite the fact the processor is supported with 4GB RAM and 128 GB of internal storage, the G50 sometimes struggles with very basic tasks. It can take an extra second longer to open a link or an app, or a web page would crash, and I’d have to reload it. The G50 also seems to have trouble multitasking when using a resource-intensive app like Pokemon Unite. After I downloaded the game, I could not even open it until every single app I had running in the background was closed, and there were only three apps in the background. The game is playable on the G50, but the combination of its slower performance and less sensitive touchscreen can make it feel like you’re moving your character through molasses against faster opponents.

For a phone that is supposed to be future-proofed for 5G connectivity — at least on sub-6Hz 5G networks on T-Mobile and AT&T and not Verizon’s mmWave network — the Nokia G50 I was testing had some trouble connecting to 4G LTE cellular service. My T-Mobile SIM card worked fine until the one day I needed cellular access, and no amount of restarting the phone would fix it. After speaking with HMD Global’s PR representative, I realized I was missing an important system update but had trouble installing it until it just installed itself on another day. My G50 has had no problem accessing my T-Mobile 4G service since then. It’s unclear whether my connection issue is a known problem with the hardware, or I just got unlucky with an update or just this particular unit.

One place Nokia did not skimp on is the 5,000mAh battery in the G50. It is a nice luxury to have a large capacity battery in your phone, even for a $300 device. To test its battery life, I used only Wi-Fi to actively post on Twitter and Hangouts, read online articles, take photos, and check my two email accounts. All in, I was able to get about 28 hours of active use out of the G50 over two days, which tracks with other phones with 5,000mAh batteries like the TCL 20S. The included 18W charging brick is definitely not a fast charger, though, because it took almost three hours to recharge this gigantic battery.

You can tell this is a Nokia phone by its iconic circular array of three rear cameras on the back of the phone. This may be a budget phone, but Nokia did not compromise on photography — at least not on the main 48-megapixel wide camera. It also has a 5-megapixel ultrawide camera, 2-megapixel depth camera, as well as a front 8-megapixel wide camera embedded into the bezel of the display.

The main camera, with its wide lens, f/1.8 aperture, and auto phase detection autofocus, can capture some detailed shots during the day, as well as on clear nights. You can still see the bubbles in my boiling-hot Korean stew and the distinct lamination layers in the pastry. I was particularly surprised by the night photo of colorful graffiti against the backdrop of an office tower. Using the 5-megapixel ultrawide camera, I was able to capture One World Trade and the Oculus in one shot, though, of course, the lights from the towers are all blown out.

Sample photos from the Nokia G50.

The biggest downside to the ultrawide camera is that its photos’ colors are not always accurate. For example, the pastries look significantly more yellow in the ultrawide photo compared to the photo of the mini cakes from the main camera. The photo with the two colorful doors is another example of how the ultrawide camera skews yellow in misleading ways. While the two doors look like they’re yellow and blue in the photo, in real life, the doors are actually orange and teal.

If you need to capture anything that’s far away on a dim day, I wouldn’t bother using the cameras on this phone with digital zoom. I took some waterfront photos on a cloudy evening, and all the photos were either blurry messes or way too saturated with yellow lighting.

The $300 Nokia G50 is neither the cheapest nor the best budget 5G phone out there, and you may be better served by its competitors. For example, the $239.99 OnePlus Nord N200 5G uses the same Snapdragon 480 5G processor as the G50 but has a 1080p display with 90Hz refresh rate for less money. Or, if you’re already a T-Mobile customer, the $300 OnePlus Nord N10 5G might be the better choice, as it uses the faster Snapdragon 690 5G processor and has the same HD display as its sibling. The Samsung Galaxy A32 5G is another popular choice at $279. It uses a faster MediaTek Dimensity 720 5G processor, has four years of security updates, and is compatible with the newer 5G C-band.

Yet all these budget 5G phones suffer from the same problem: they all had to compromise in some way to make room for its more expensive 5G components. Since 5G isn’t ubiquitous yet and is hardly essential to our lives in 2021, I’m not sure it’s necessary to limit yourself to 5G phones when there is a world of 4G phones that already offers better value and user experience. For around $300, you can get a Pixel 4a with a camera that will blow any budget 5G phone’s camera out of the water. Or you can get the TCL 20S with premium looks and specs for just $250 and save some money toward your future 5G phone — when the technology matures.

Correction, November 5th, 2021 @ 10:15am ET: A previous version of the review incorrectly described HMD Global as the parent company of Nokia, when it is in fact a brand licensee. We also spoke with a HMD Global PR representative rather than a Nokia spokesperson, as previously stated. We regret these errors.

To actually use the Nokia G50, you must agree to:

Two optional Google agreements that you can skip if you don’t use Google Assistant:

Lastly, you have the option to join:

In total, you have to accept six agreements and can bypass five when setting up the Nokia G50.