Logitech’s $99.99 Pop Keys is part of Logitech’s new Studio Series lineup of cute computer accessories alongside the $39.99 Pop Mouse and $19.99 Logitech Desk Mat. The keyboard appears to be an attempt to pair Logitech’s typically solid functionality, like multiyear battery life and easy cross-device compatibility, with a cutesy TikTok-friendly aesthetic and novelties like keys dedicated to typing emoji.

But after using the keyboard for daily work, I don’t think Logitech has gotten the balance right. The Pop Keys’ typewriter-style keycaps might look great on social media, but they’re tricky and unforgiving to type on, and replacing useful key functions with five emoji shortcuts is a novelty that gets old quickly.

The Pop Keys is hitting the US this month, and Logitech tells me it’ll be available in Europe in the near future.

Our review of Logitech Pop Keys 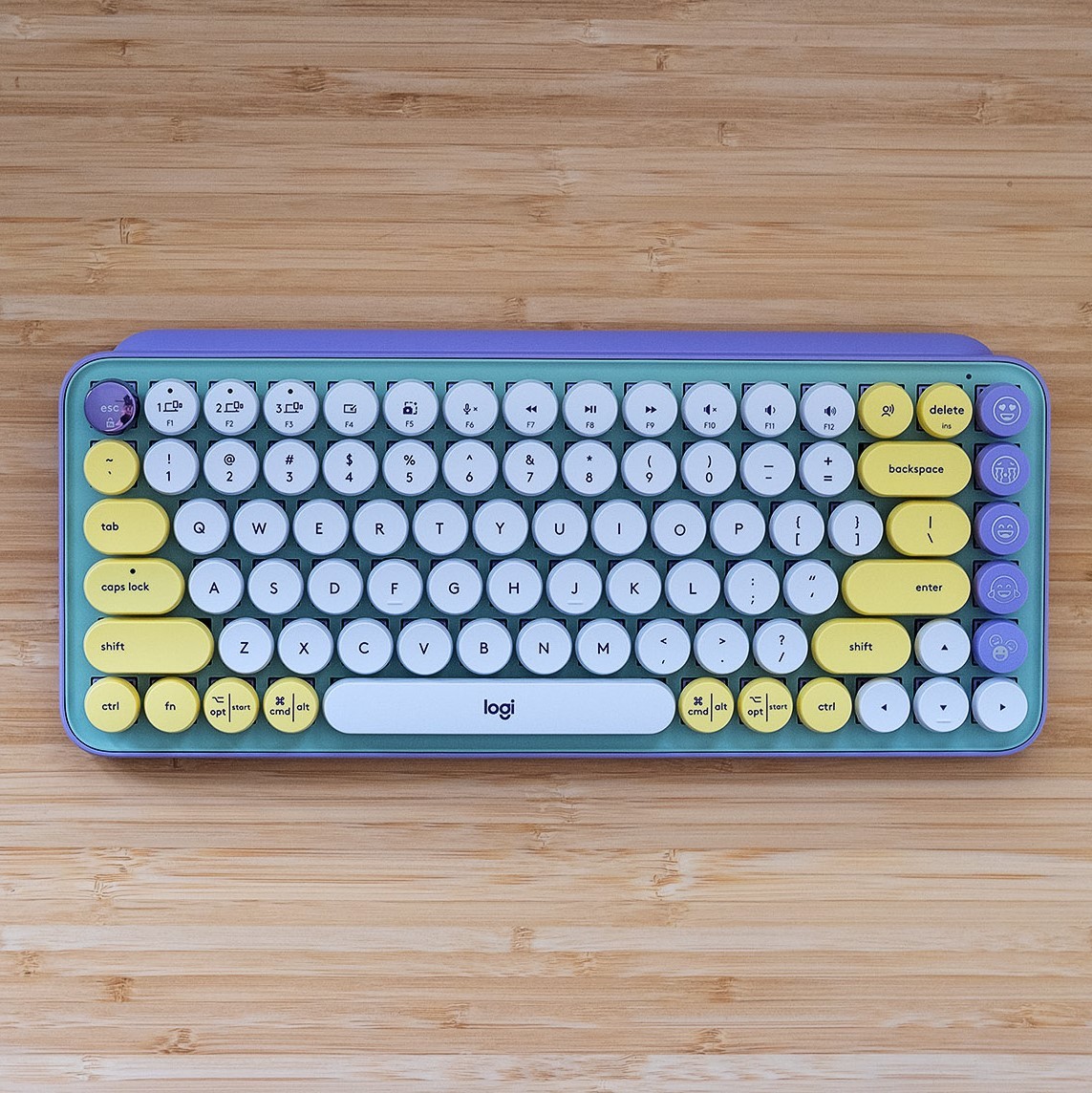 There’s little wrong with the basic specs of the Pop Keys. Although it’s not rechargeable, you get three years of battery life from an included pair of AAA batteries. It’s capable of pairing to up to three devices via Bluetooth or up to two Bluetooth devices plus one via Logitech’s Bolt USB receiver (included in the box), and you can easily switch between them using the F1 to F3 keys. The keyboard is available in three color schemes: pink; yellow and black; or purple and yellow.

The Pop Keys has what’s generally known as a 75 percent keyboard layout, which means it’s more compact than a full-size keyboard but still includes a function row and arrow keys. Although you can change this in Logitech’s settings, by default this function row is given over to a variety of other commands like switching between paired devices and playback and volume controls. There’s an Fn key to access the more standard F1 - F12 buttons. On the right of the keyboard there are five programmable keys designed for typing different emoji symbols.

It’s clear what Logitech’s priorities are with the Pop Keys from the moment you open its box. Rather than including both Windows and Mac keycaps in the box like other manufacturers such as Keychron have started doing, Logitech has opted to include keys with additional emoji symbols on them. The idea is that when you program the keyboard’s emoji shortcut buttons, they correspond to the right symbols.

So while the Pop Keys still technically supports both Mac and Windows, the Option / Windows and Command / Alt legends are crammed onto the same keys. It’s functionally fine, but it looks messy. Especially on a keyboard that prioritizes its appearance as much as the Pop Keys does.

Mac and Windows legends are crammed onto the same keys

Instead, the idea with the eight available emoji keycaps is to pick your four favorite emoji for the keyboard, and then use Logitech’s software to program the keys to correspond to the emoji you’ve picked. There’s a fifth emoji key on the keyboard that acts as a shortcut to pull up the OS-level emoji selection menu.

I can see the basic appeal, but the whole implementation is so cumbersome that I ended up just getting annoyed that the Pop Keys wasted five precious keys on emoji when it could have more useful buttons there like dedicated Home / End keys or Print Screen. For starters, four out of the five emoji keys don’t even do anything until you’ve installed and configured Logitech’s Options software and told it what emoji you want each of them to correspond to (the button to open the OS-level emoji select menu doesn’t require the software).

Even then, four emoji keys sit in a weird middle ground between “people who love emoji enough that they want dedicated emoji buttons on their keyboard” and “people who only use four emoji on a regular basis.” I’m perfectly happy to admit I might not be the target market for this keyboard, but personally I’d much rather have dedicated Home and End keys rather than having to access these common functions by using Fn and the left and right arrow keys.

It’s possible to remap these keys to something more useful using Logitech’s software if you’re not an emoji fiend, and there’s the option of remapping them to individual keys or key combinations. Unfortunately, I couldn’t find a way to assign one of them to be a print screen key (on Windows, Logitech tells me that the keyboard’s F5 key is set to launch the Snip & Sketch tool by default, but I’d prefer the speed and flexibility of a dedicated Print Screen button). Key remaps also aren’t saved to the keyboard, so you’ll have to remap it if you ever want to connect it to an alternative PC. And naturally the keycaps aren’t going to match the function they’re performing if it’s not an emoji (buying third-party keycaps could be an option, but watch out for the non-standard bottom row).

Even if you went to the trouble of remapping each of these emoji keys to fulfill more useful functions, you’re still left with a keyboard with typewriter-style keys that can be a chore to type on. There’s nothing wrong with the switches underneath each key (they’re tactile Cherry MX Brown clones produced by TTC). But the keyboard’s circular keycaps are unforgiving. If your finger doesn’t hit a key directly, then there are big gaps between the keys for it to fall into. I could get by, but squared off keycaps are the standard for a reason.

Its keycaps are made of ABS plastic

Beyond their circular shape, the Pop Keys’ keycaps just don’t seem particularly well made. Their legends are pad printed, which is a method generally criticized for wearing away after just a couple of years (dye sublimation or double-shot molding is generally preferred). When I asked Logitech about this, it told me the keys are coated with a UV resistant finish that should allow the legends to stay crisp “over many years.” The keycaps are also made of ABS plastic, which can wear down and become shiny over time (which is why PBT plastic is often considered the better option).

A couple of additional observations:

Logitech’s Pop Keys is a great-looking little keyboard, and three years of battery life is nothing to be sniffed at. But it’s not functional enough for me to recommend it to most people. The circular keycaps take some getting used to, and even then I think regular square keycaps are just plain better for typing. Emoji keys are a nice idea, but I don’t think they’re a practical addition that many people will get much use out of, and it’s a missed opportunity not to include some more useful keys. And my experiences with past keyboards suggest the Pop Keys’ legends could be prone to wear away over time.

If you’re in love with Logitech’s aesthetic and use emoji enough that you’re happy to dedicate multiple keys on your keyboard to them, then the Pop Keys technically does everything it claims. But if you’re prepared to compromise on aesthetics, then I’d recommend checking out Keychron’s K2 wireless keyboard. It might not look as cute, but it’s a whole lot more functional.

It’s possible to use the Logitech Pop Keys without any companion software. But if you want to use or reprogram its emoji keys, then you’ll need to install Logitech’s Options software, which involves agreeing to some terms and conditions.

In total that’s one mandatory agreement and one optional agreement.