You’d expect a lot from Amazon’s first self-branded TVs. After building a successful hardware business with its Echo smart devices and Fire TV streaming gadgets, now the tech giant wants to put its name on the biggest screen in your home. The new Fire TV Omni series delivers 4K HDR picture in multiple sizes that start at aggressively low prices: the 50-inch model costs $359.99 at the time of this review. Only the largest 65-inch and 75-inch models include Dolby Vision HDR, which, in Amazon’s own words, allows for “a more cinematic experience.” All of the Omni TVs run Amazon’s Fire TV software and have built-in mics for hands-free Alexa voice commands — even when the screen is off. There’s also a cheaper Fire TV 4-Series on sale now, but I’m reviewing the higher-end series.

In some ways, Amazon’s new effort shows big promise. The Alexa integration is more thorough and full-featured than what you’d get using a Fire TV stick: in addition to launching your favorite streaming apps or searching for content with your voice, you can also switch between TV inputs. And you can query Alexa when the TV’s display is fully off for simple information like the weather or to play music. The Omni also supports features like Apple AirPlay 2, which Amazon’s streaming players still do not, and you can plug a webcam into the TV’s USB port for video calls with Echo Show devices right now and Zoom and other apps later on.

But Amazon’s first TVs underwhelm in the all-important area of picture quality, and they rank below competition from TCL, Vizio, Hisense, and other TV makers that play in the same price range. There’s nothing inherently terrible about the viewing experience on the Fire TV Omni. If you’re someone who’s easy to please, you might be totally satisfied. But Amazon has made a few too many hardware compromises for me to recommend its new TV lineup to people who want the best picture for their money. 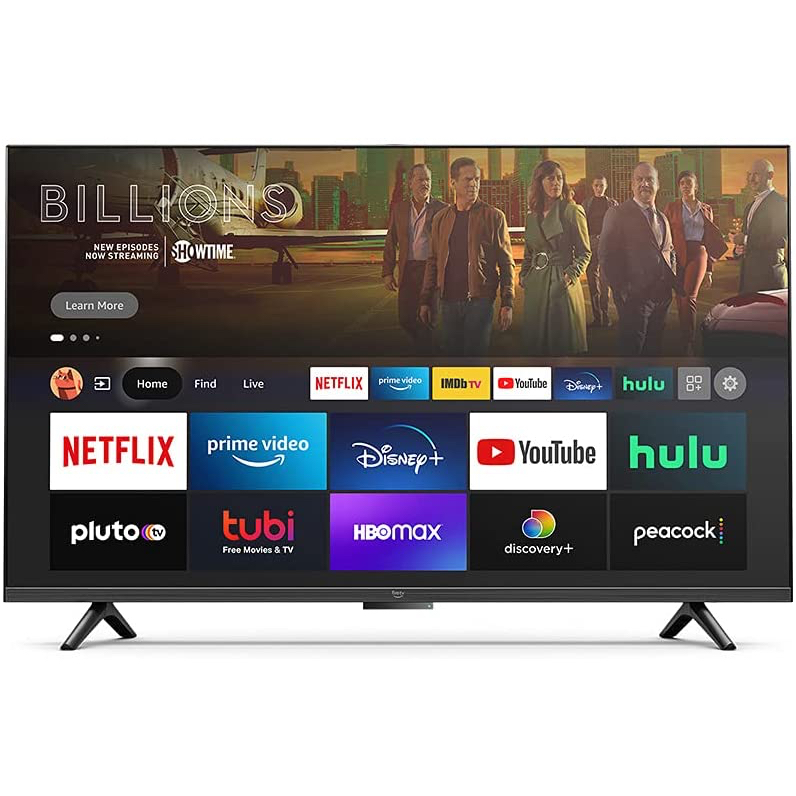 Before going further, I have to note that while Amazon claims these are “Amazon-built TVs,” they are almost certainly being manufactured by TCL. There are unmistakable hardware similarities between them, from the general overall design to the I/O port layout. I’m sure Amazon had some input into the final product (especially with regards to the Alexa integration), but there’s no denying who the company contracted to produce these.

The 55-inch model I tested has black bezels, though there’s a slimmer silver trim on the 65-inch and 75-inch Dolby Vision sizes. Centered below the bottom bezel is an LED indicator for the far-field microphone array: a blue light illuminates when the “Alexa” wake word is detected (and you’ll see the familiar long blue line across the lower portion of the TV screen). If you’re not a fan of your TV having built-in microphones, you can disable them by flipping a switch that’s on the TV’s underside. A red light indicates that the mics have been turned off, and you’re still free to use voice commands with the Alexa Voice Remote in this scenario.

As for port selection, the Omni includes three HDMI 2.0 ports and a single HDMI 2.1 eARC port that can take advantage of the latest and greatest soundbars. There’s also cable / antenna input, ethernet, a USB 2.0 port, optical audio out, a headphone jack, and a port for the IR emitter that Amazon also includes in the box. That IR emitter can be used to control your other home theater gear and gives the Omni some very rudimentary universal remote capabilities, much like the Fire TV Cube.

Similar to existing “Fire TV Edition” TVs from Toshiba and Insignia, Amazon’s Omni TVs run the company’s Fire TV software with a few extra tweaks for TV inputs, picture settings, and so on. But general navigation, browsing content, and streaming all feel the same here as on a Fire TV Stick 4K. All of the major streaming apps you’d want are accounted for, even if the interface continues to put a bigger emphasis on Prime Video content than anything else. In most cases, Alexa’s responses were identical to those I’ve received on a Fire TV streaming device. You’re not really gaining any major new functionality with the Omni, but assuming you don’t have an Echo speaker in the same room, it’s nice being able to ask for the basics (like turning off a nearby smart bulb) with the screen off. Another potential benefit of going with this TV is that you’ll receive new software updates long into the future, though the same can be said for Roku TVs.

It’s when you start watching movies and TV shows on the Fire TV Omni that it becomes clear Amazon settled for average picture quality. These TVs use a direct LED backlight and lack any kind of local dimming that can produce deeper black levels by illuminating and dimming “zones” of the screen as necessary. So the contrast on Amazon’s TV falls short of what you’d find on something like TCL’s 5-Series or Vizio’s M-Series. It’s not the end of the world, but it’s noticeable. I’m disappointed that Amazon went such a basic route — particularly on the larger screen sizes — and picture quality suffers for it. Black levels aside, I’ve found general HDR10 performance across several movies to be respectable for the price range of this 55-inch model, though Digital Trends was disappointed by the maximum HDR brightness levels on the Dolby Vision-capable Omni. This is another area where it’s evident that Amazon isn’t trying to outshine the competition and instead settling for “passable.”

Using a Fire TV Omni requires an Amazon account, which means you’ll have to agree to the company’s conditions of use and privacy notice to get started. It’s also important to be aware of privacy settings for Amazon’s Alexa since the voice assistant plays such a large role on this device.

You aren’t going to be gaming at 120Hz with your PS5 or Xbox Series X on the Fire TV Omni: this is a 60Hz panel, and it also lacks variable refresh rate. But there’s at least support for auto low latency mode (ALLM), and Amazon fares impressively well at cutting down input lag when gaming mode is active. It’ll work for gaming but definitely doesn’t check every box that new console owners are looking for.

At review time, there are still several features of the Fire TV Omni listed as “coming soon,” such as the aforementioned AirPlay 2 support and the ability to use Echo speakers for home theater sound. A native Zoom app has also yet to appear.

My overall takeaway after testing the Fire TV Omni is that it’s an attractively priced 4K TV with convenient voice controls — but only so-so picture quality. Amazon really needs to do better at that criteria next time around. You can buy a TCL 6-Series Roku TV with fantastic picture quality for not much more. Google TV runs on gorgeous Sony OLEDs and now a high-end TCL TV with Mini LED. Unfortunately for Amazon, the Fire TV Omni’s viewing experience doesn’t really come close to any of those. At the end of the day, you’re better off choosing a TV with better picture quality and throwing in a Fire TV Stick 4K Max if you prefer Amazon’s streaming platform. But while this might be an underwhelming first attempt at “the Amazon TV” for nerds like myself, I wouldn’t count Amazon out. The prices alone might be enough to sell some people on the Fire TV Omni. And if the company can maintain similar prices and dial up the picture quality of its eventual second-gen TVs, the whole concept will be all the more appealing. If there’s one thing we know about Amazon hardware, it’s that the company is willing to improve it, and quickly.