For casual users, this $160 4G phone is good enough

The Moto G Pure is the rare $160 phone that works well enough that you forget you’re using a sub-$200 device. Yes, Motorola made some compromises to deliver a phone at this low price point, but it still nails all the basics that you should care about: good build quality, good battery life, and good cameras for the price.

That is not to say the Moto phone is perfect. Its processor is just a second slower in most tasks, it only works on 4G networks, and its paltry 32GB of internal storage is just not enough space to use for long. But for its price, it’s hard to argue against the Moto G Pure — it gets a lot right. 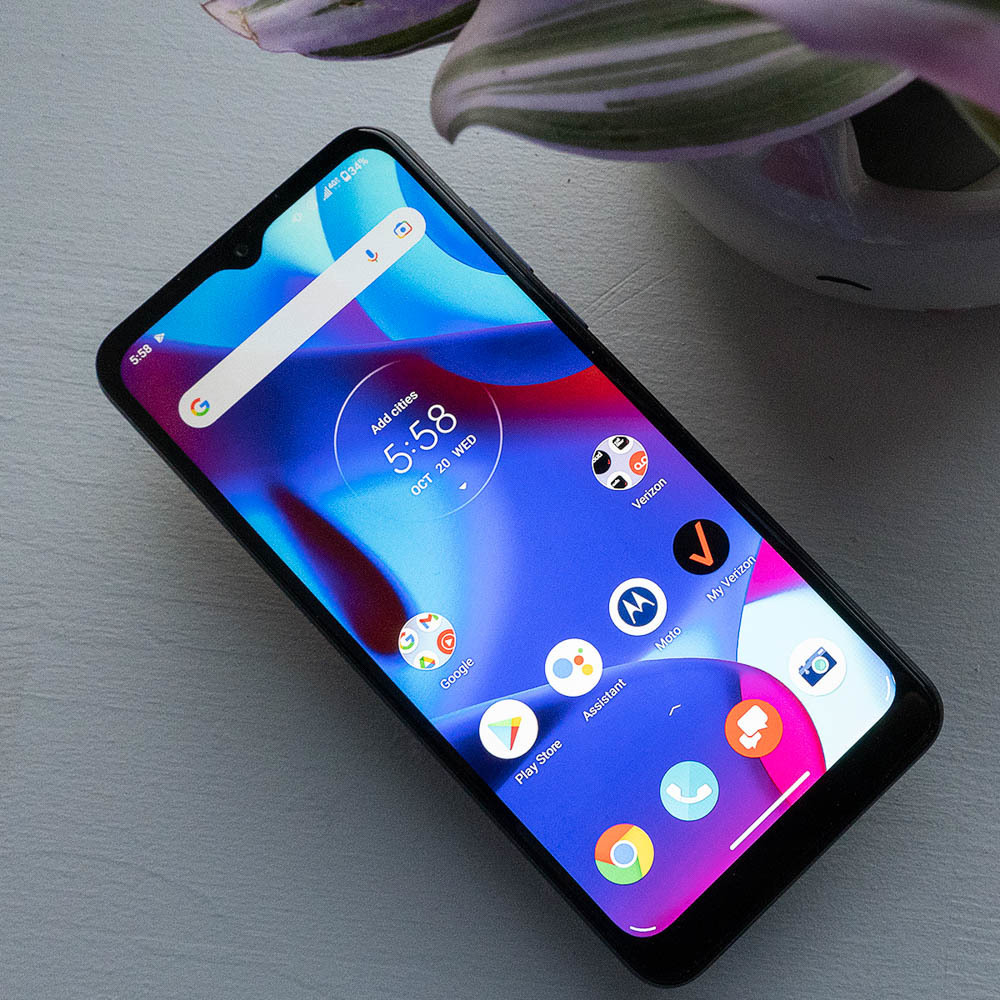 For a big phone with a 6.5-inch screen, the Moto G Pure feels relatively compact, measuring 0.34-inch thick and weighing 0.41lbs. Thanks to its rounded corners and sloped edges, the G Pure is comfortable to hold for long stretches, though it’s a bit tall (the screen has a 20:9 aspect ratio) to use single-handed for my small hands.

Available in deep indigo, the G Pure has a subtle sheen to its textured, matte back cover. Its plastic material is very hard and slippery, despite that texture. In fact, I’ve lost count of the number of times the phone has magically slipped off an ottoman or table and still works. Yes, this $160 Moto phone is quite durable, but I wouldn’t test the smartphone gods — you’ll still be better off with a case.

It has a snappy fingerprint sensor under the Motorola logo, as well as Face Unlock to give you a hands-free option to unlock your phone. I like that the Moto software gives you more control over how this works. You can use your face to unlock the phone (no need to press the power button first), and ask the phone to bring you to the last app or webpage that was opened (rather than the lockscreen). With good lighting, Face Unlock works well enough, but the fingerprint sensor is faster and more consistent.

As part of the cost cutting to hit the G Pure’s low price, Motorola decided to use a weak processor and minimal RAM, and it shows. At the heart of the Moto phone is the MediaTek Helio G25 processor, which is comparable to the Qualcomm Snapdragon 439 but actually lags behind that 2018 Snapdragon chipset. Everything from opening a website, switching between apps, to opening the camera app to take a photo just takes an extra second on the Moto phone. While this doesn’t sound like much, those extra seconds really add up over the course of a day and can make you question your sanity.

It has just 3GB of RAM to support its under-powered processor and a meager 32GB of internal storage. At this point, 32GB is simply not enough capacity for a phone, especially when most people are hanging onto their phones for longer. After just two weeks of light use — installing updates and a few apps, plus taking some photos — I’ve already burned through 18.04GB (56 percent of storage) on the G Pure. With Motorola promising one OS update and two years of security updates, you’ll likely run out of space before you run out of software support. Good thing it has a microSD card slot, where you can expand its limited capacity with up to a 512GB card.

The G Pure’s 6.5-inch LCD screen may look vibrant with its brightness set to 100 percent, but it is only a 720p display, with a low 269 pixel density. At 1600 x 720p resolution, The Spider-Man: No Way Home Trailer looks more pixelated and dim on the Moto than on the OnePlus 9’s 2K display. Day to day, you probably wouldn’t notice just how low-res the display is, but if you have any higher-quality screens in your life, it will stand out and not in a good way.

I played some Pokemon Unite to stress test it, and performance was better than I expected, at least once I was able to launch the game fully. It took three tries and multiple force quits on it before I could actually play. Once the game finally loaded, I was able to move my pokemon around the battlefield without lag, with the battle music blaring from the lone speaker.

Using only 4G service to test the G Pure’s 4,000mAh battery, I spent the day toggling between two email accounts, sharing content on Twitter and Hangouts, and playing some Pokemon Unite. The G Pure stayed cool to the touch no matter how much I was stressing it. Although the battery didn’t quite live up to the two days of use claim from Motorola, I got about 16 hours out of it (or about seven hours of screentime) before needing to hit the charger. Don’t expect a fast charge, though: It took me about two hours to recharge this battery with the included 10W charging brick. In all, the battery should last you a full day at minimum, or maybe as long as two days for a light user.

For a $160 phone, the cameras on the Moto G Pure are better than expected, especially for photos that you’ll likely only share online. Rather than squeeze another lackluster ultrawide or macro camera onto the back, Motorola made a smart decision to keep it simple with just a rear dual-camera system — a 13-megapixel main camera and a 2-megapixel depth sensor — plus a 5-megapixel front-facing camera (f/2.4) for selfies.

The 13-megapixel main camera with f/2.2 aperture was surprisingly capable at capturing details in low-light situations. At a recent indoor event with tricky lighting, it had no problems focusing with various light sources in dark rooms, and it managed to photograph small details in the art installations.

Like other smartphone cameras in this class, color accuracy seems to be an issue with the G Pure. Most photos look fine, but there are a few issues, like the pumpkins that look too red with stems that look too blue to be realistic. Likewise, the yellow door should look more orange, and the blue door should look more teal (with more green) than blue.

My biggest gripe with the G Pure’s camera is its slider interface for zooming. Unlike other camera apps where you can tap to select the most optimal digital zoom presets, Moto’s zoom slider doesn’t automatically appear in the app. In addition, your hand will probably block your screen as you try to frame your shot and navigate the slider bar at the same time.

At $160 — or less if you catch a sale or carrier deal, as this phone works on many 4G networks in America — it’s hard to deny that the Moto G Pure will be good enough for most people looking for a basic budget phone for under $200. After all, it has an all-day battery, a versatile main camera, all in a well-designed, durable package.

It’s a shame it doesn’t have a faster processor, more RAM, or more onboard storage, which would make it a clear winner. I’d rather Motorola charge a slightly higher price like the $190 TCL 20SE, which offers 128GB of internal storage, has the Qualcomm Snapdragon 460 processor, and is supported by 4GB of RAM. At least you wouldn’t have to constantly worry about backing up the files from your phone.

But these issues might not be deal-breakers for more casual users or those with a strict budget. Not many great phones are available at this price point, and the Moto G Pure is quite the catch.

Photography by Gloria Sin / The Verge

To actually use the Moto G Pure, you must accept Motorola’s Privacy & Software Updates, but you also get to decide how it works on your phone:

After entering your Google account, you must agree to:

You’ll also need to agree to the following:

The carrier may also ask you to agree to some policies and services. In my case, Verizon has these terms and conditions:

Lastly, you have the option to join Motorola’s user community:

In total, you have to accept three main agreements and can only bypass five when setting up the Moto G Pure.