My Amazon pods are headed to the recycler

Wyze has built a reputation for astonishingly affordable gadgets. Sure, they don’t always knock it out of the park: while the company’s $20 security cam put an entire industry on notice, we ultimately decided the barebones $20 Wyze Watch was too much a work-in-progress to give it a review.

But this May, I took a chance on the new Wyze Buds Pro, a $74 pair of wireless earbuds, and couldn’t believe how good they are. They offer true active noise cancellation and wireless charging at a previously unheard-of price while also punching way above their weight in audio quality. I put them head-to-head against the $80 Jabra Elite 3, which we recently praised for nailing the essentials. It wasn’t even a competition: I’d pick the Wyze Buds Pro every time.

Well, except for exercise.

Our review of Wyze Buds Pro 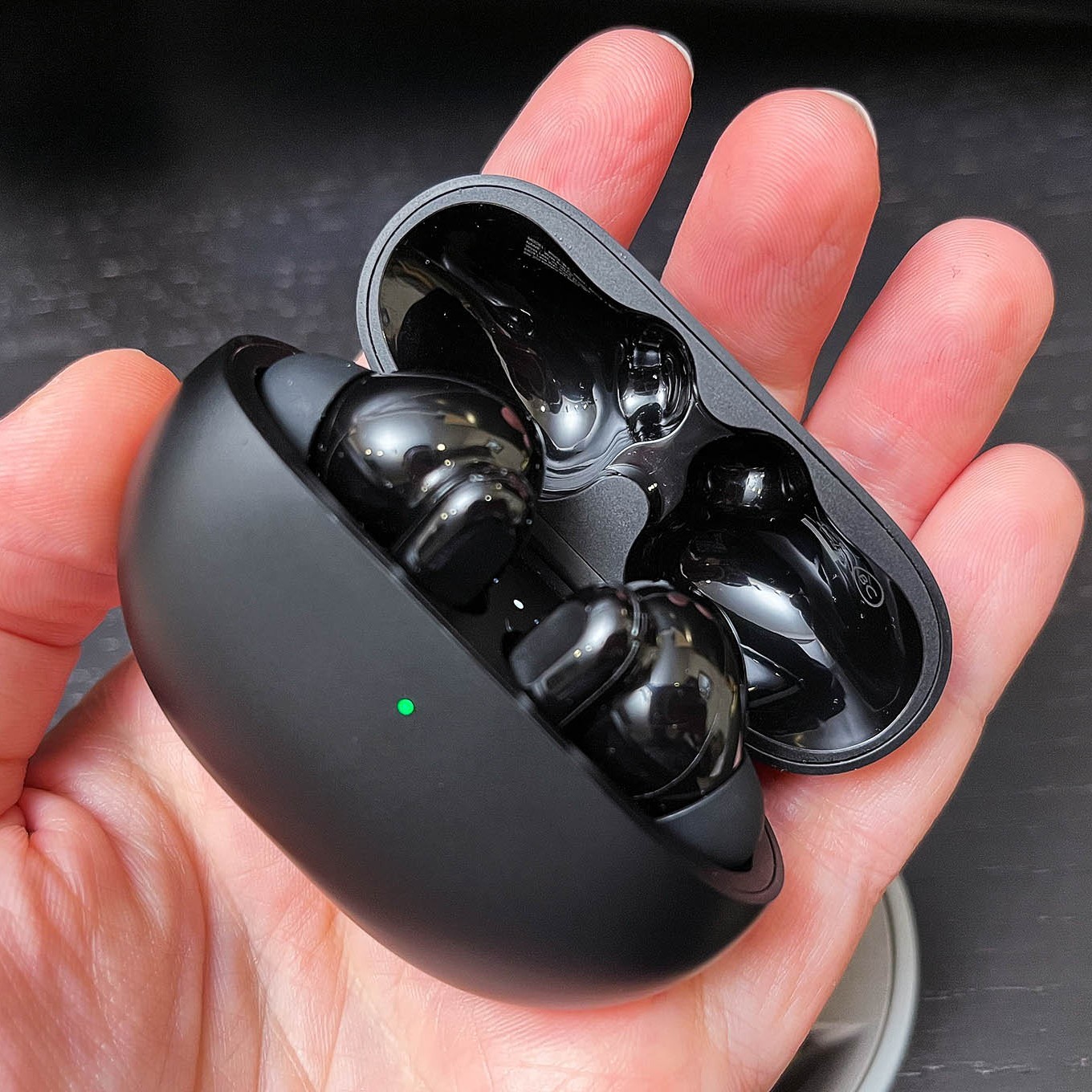 It’s tempting to compare the Wyze Buds Pro to Apple’s AirPods Pro. They certainly look similar — pod-shaped earbuds with offset silicone tips and long stems, housed in almost identically sized pill-shaped charging cases, with LED indicator dots up front and the same exposed metal hinge on the backside. Heck, they almost make the same sound flipping open and closed. You can almost hear Wyze marketers whispering: “Why would you pay three times as much for Apple?”

That’s not a fair comparison, though. The AirPods automatically pair to Apple devices, offer spatial audio tricks, and sound a bit better on balance (Apple’s sound is not as clear but is less harsh). I’m not talking about Apple when I say the Wyze Buds Pro punch way above their weight, much less class-leading earbuds like Sony’s WF-1000XM4. I’m talking about the entire rest of the market.

At the time I ordered them in May, I couldn’t find a single other product with both noise canceling and wireless charging for under $100, much less $74. Previously, I owned a pair of first-gen Amazon Echo Buds, which originally cost $130 with neither of those features and a last-gen Micro USB charging port. And yet, those Echo Buds were themselves considered aggressively priced just two years ago for managing to fit Bose noise reduction and always-on Alexa access for that much money.

But after a single day with the Wyze Buds Pro, I was ready to throw my Amazon pods in the battery recycling can.

It’s the clarity. Even as my favorite songs layer on instrument after instrument, I can make out the words, lyrics which can generally feel a tad drowned out by the mix. This audio is sharp, sometimes even to a fault: the snazzy processed sound can make the Wyze Buds Pro’s highs too tinny in songs that heavily rely on electronics. (When I finished Chvrches’ excellent new album Screen Violence, I was very ready to give my ears a rest.)

Wyze treats its products like works-in-progress, with features and prices that sometimes change after launch. I got two full firmware updates via the (optional) Wyze app, and while it was generally smooth sailing, I saw a small handful of bugs. One time, one of the earbuds shut down entirely on a call until I placed them back in the case to reboot. Another time, both earbuds were locked at extremely low volume. The auto pause feature wasn’t totally reliable when I pulled them out of my ears, though it’s far better than having none. And while I bought them at the original advertised price of $60, they’re now $74. (The $20 Wyze Cam also retails for $36 now.)

While I tested primarily on iOS, Wyze claims to offer a couple extra features for the Buds Pro on Android: Bluetooth Fast Pair, which I didn’t actually get to work on my Pixel 4a, and a way to access Amazon’s Alexa voice assistant without a weird workaround that involves force-closing the Wyze app.

But when I tried on the $80 Jabra Elite 3, or the OG Echo Buds, or even my Steelseries Arctis Pro Wireless, I couldn’t believe how much muddier my other headsets sounded — how much mud it felt the Wyze Buds Pro had removed from my ears. I could pick out instruments with ease, even ones that aren’t supposed to be there; the clink of silverware during a live recording of Vienna Teng, for example. You also get a remarkable amount of bass for true wireless buds, even without the bass boost feature turned on. Despite the fatiguing highs, I still cranked up the volume to revel in the clear mids and deep, booming lows when I went out each evening for my daily walk. (The mic is not particularly good, but callers told me I sounded fine.)

Walking is about as far as I’d trust these as a pair of exercise headphones, though. I admit my ears are finicky about buds of all kinds, but there’s no question the Wyze Buds Pro are designed to fit loosely, held in only by the slight pressure of an oval silicone eartip up front and the way your ear (hopefully) cups the glossy smooth plastic pod around back. They threatened to fall out more than once when I tried anything as brisk as a jog, the right one gets a little looser when I chew, and I did drop them several times trying to put them in, including right under my cramped seat (twice) on a long flight to NYC. That wasn’t a problem with the Jabra, whose beefy round eartips and sculpted shape felt locked into my ears.

And while Wyze’s noise cancellation held up admirably on the flight, deadening that jet-engine sound quite a bit, I have no idea why the company advertises “wind noise reduction” for your music — even walking in a light breeze buffets the noise-canceling microphones enough to ruin my music. It also doesn’t help that Wyze expects you to carefully stab a tiny touch-sensitive spot on the top of the stem a precise number of times to skip tracks, change the volume, or summon a voice assistant. I wound up using my phone or smartwatch for all of that, ignoring the buttons except when I wanted to switch to Wyze’s transparency mode to pipe more of the world around me. Again, not optimal for exercise.

The other kind of person who probably shouldn’t buy the Wyze Buds Pro is the constant listener, someone who depends on music all day. With noise canceling on and the volume and bass cranked up the way I like, I saw a little over three hours of use on a charge. That’s not great. But it also wasn’t a problem for me: I tend to put them back in the case after an album or a podcast or a long evening walk, and the battery case charges them quickly: I saw 20 percent in the tank after 12 minutes, 65 percent after 20 minutes, and they were fully charged when I checked back an hour later. I was able to stay away from a charger for two whole weeks of casual use, racking up 15 hours and 42 minutes of total battery life during that time.

Recently, I’ve heard that Wyze may not be the only game in town anymore for inexpensive quality earbuds with true active noise canceling, wireless charging, and USB-C — reviewers are saying good things about the $80 Anker SoundCore Life P3 as well, which come with a notably less pocketable case but also offer a lot more battery life in exchange. Maybe I’ll try that next. Or maybe I’ll wait a couple more years and see if we experience yet another dramatic improvement in Bluetooth value for money. Here’s hoping the next wave comes with multipoint audio to connect to two devices at a time. Even the top-shelf Sonys don’t have that on lock.

You can use the Wyze Buds Pro without ever touching the app, which means you won’t need to accept any contracts. But if you want to turn on the bass boost, change the touch controls, or get firmware updates, you’ll need to install the same Wyze app that the company uses for its home security products. Creating an account means agreeing to the Wyze Terms of Service and Privacy Statement. It also asks for your phone number, but you can skip that part.