This ultra-short throw projector can almost replace a TV

But you need to really hate the look of televisions

Share All sharing options for: This ultra-short throw projector can almost replace a TV

Televisions are ugly. A 55-incher creates about 1,300 square-inches of eyesore when not in use. Many don’t care, but my spouse does, which meant living with a tiny TV for longer than I care to admit.

Ultra-short throw projectors are often marketed as TV replacements. They’re small by comparison, yet capable of projecting a large image when placed just inches from the wall. But UST projectors capable of a big bright 4K HDR image have always been prohibitively expensive. So, long story short, we bought a 55-inch OLED TV while in Covid lockdown.

But now there’s a newcomer: the all-in-one Xgimi Aura is a 4K HDR ultra-short throw laser projector with integrated sound system that runs Android TV and is capable of tossing 2400 lumens onto my white walls for $2,499. That’s not cheap, but it undercuts other 4K short-throw projectors that start at $2,800 for a VAVA, jump to $3,300 from established brands like Optoma, and reach prices as high as $15,000 for a top-end Sony.

“Your next TV is not a TV,” is how Xgimi markets the Aura. But can a UST projector really replace a modern TV?

Our review of Xgimi Aura 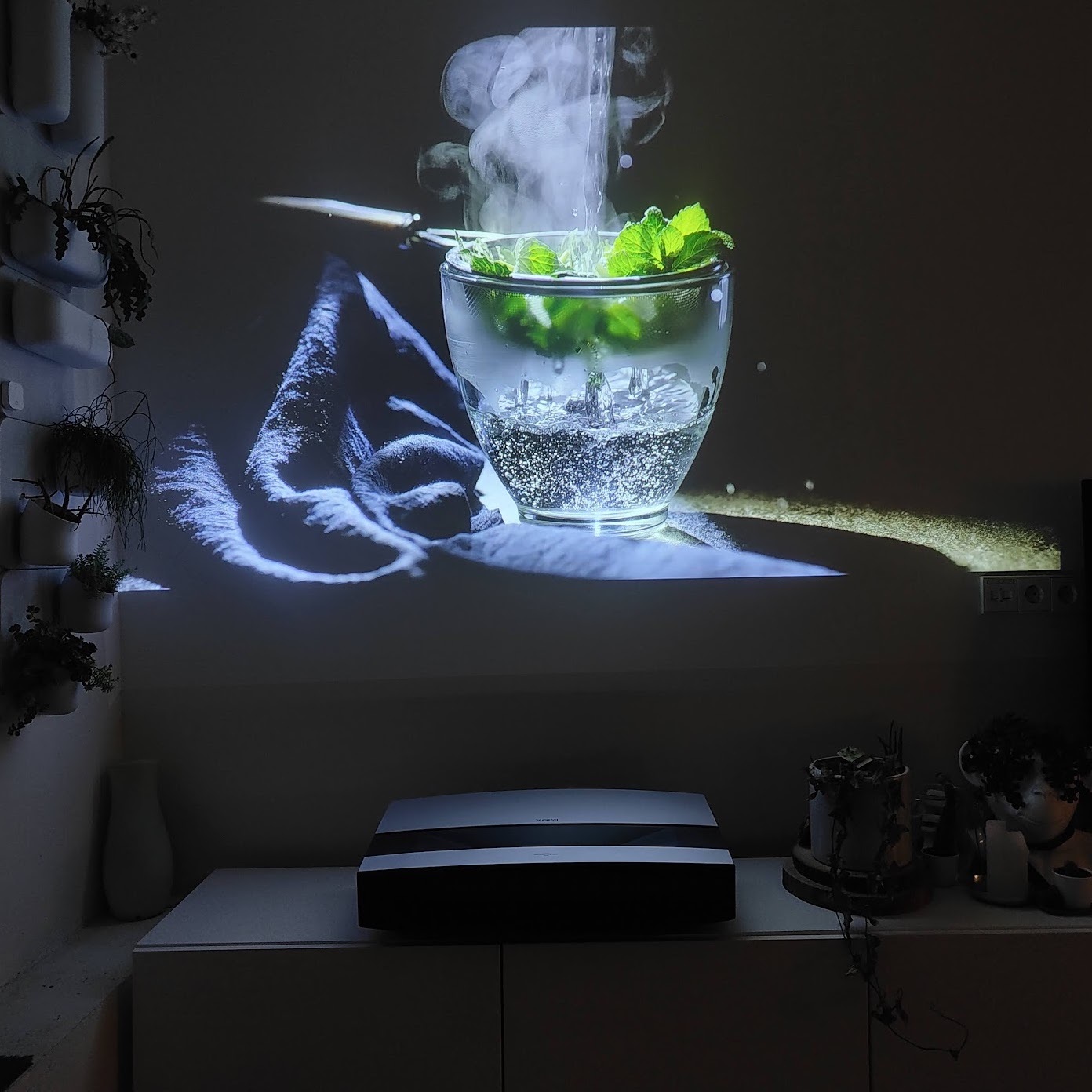 Let’s first take a step back for those of you not familiar with Xgimi. The Chinese company got its start in 2014 before debuting in Western markets in 2016. It’s built a loyal fanbase around nice looking all-in-one portable projectors that are reasonably specced yet still inexpensive. These include the Z4 Aurora and Horizon Pro 4K which The Verge reviewed previously.

The Xgimi Aura is not portable. It measures 606 x 401 x 139.5mm and weighs 14.9kg (about 32 pounds) which is big compared to traditional long-throw projectors. But most of that volume sits low on a cabinet in place of a free-standing television.

To replace a TV, the Aura needs to turn on as quickly, be just as enjoyable to view in all lighting scenarios, offer a similar selection of streaming apps, and deliver comparable sound with the option to enhance it for home theater setups. It also needs to do all these things while justifying a price that’s at least twice that of a 55-inch OLED.

So let’s address each item one-by-one.

My 55-inch LG TV boots into webOS in about 25 seconds with Quick Start+ turned off. It turns on in just 5-6 seconds with standby enabled, which is my usual setup. By comparison, the Xgimi Aura boots cold into Android TV OS 10.0 in about 55 seconds, twice as long as the LG TV. Turning on from standby takes about 11 seconds, again twice the time.

There is an option to turn the Aura’s laser projection unit off (to stream music, for example) which allows it to spring back to life instantaneously. But fan noise (more on that later) and excessive power draw makes this an option I use sparingly.

I can deal with a few extra seconds of startup time as long as my apps are responsive when I’m looking for something to watch.

Comparing the viewing experience of a projector to a TV is really comparing apples to oranges. Some will certainly prioritize a 100-plus inch immersive display that, for most people, is only financially viable with a projector. Others want high-contrast, color-accurate displays enabled by the brightest TVs. Unless you’re in the market for a super yacht, you can’t afford both size and image-popping HDR from a single display.

Size junkies will be drawn to the Aura’s claimed 150-inch max display. But that comes with a few catches. First, spreading all those lumens across such a large space dims the displayed image considerably. Second, the Xgimi Aura needs to be 17.3 inches (44.1cm) from the wall to achieve such a large image, which can easily defeat typical TV stands that tend to be quite narrow (the projector is almost 16-inches wide). Nevertheless, buying a wider table is cheaper than knocking down a wall to gain the distance required by some long-throw projectors to achieve that same display size.

In my setup, where the Aura sits on a narrow Ikea sideboard, the furthest I can move the projector from the wall before the beamer tumbles over the edge is about 15.5cm (6.1 inches). That’s far enough to create a 90-inch projected rectangle. It’s big compared to my 55-inch LG OLED but nowhere near as bright.

As you might have already guessed then, viewing the Aura during the day is bad. It’s fine for watching the news, I guess, and catching up on some of my YouTube subscriptions as long as the blinds are closed, but the image is washed out severely, even on dreary rainy afternoons. 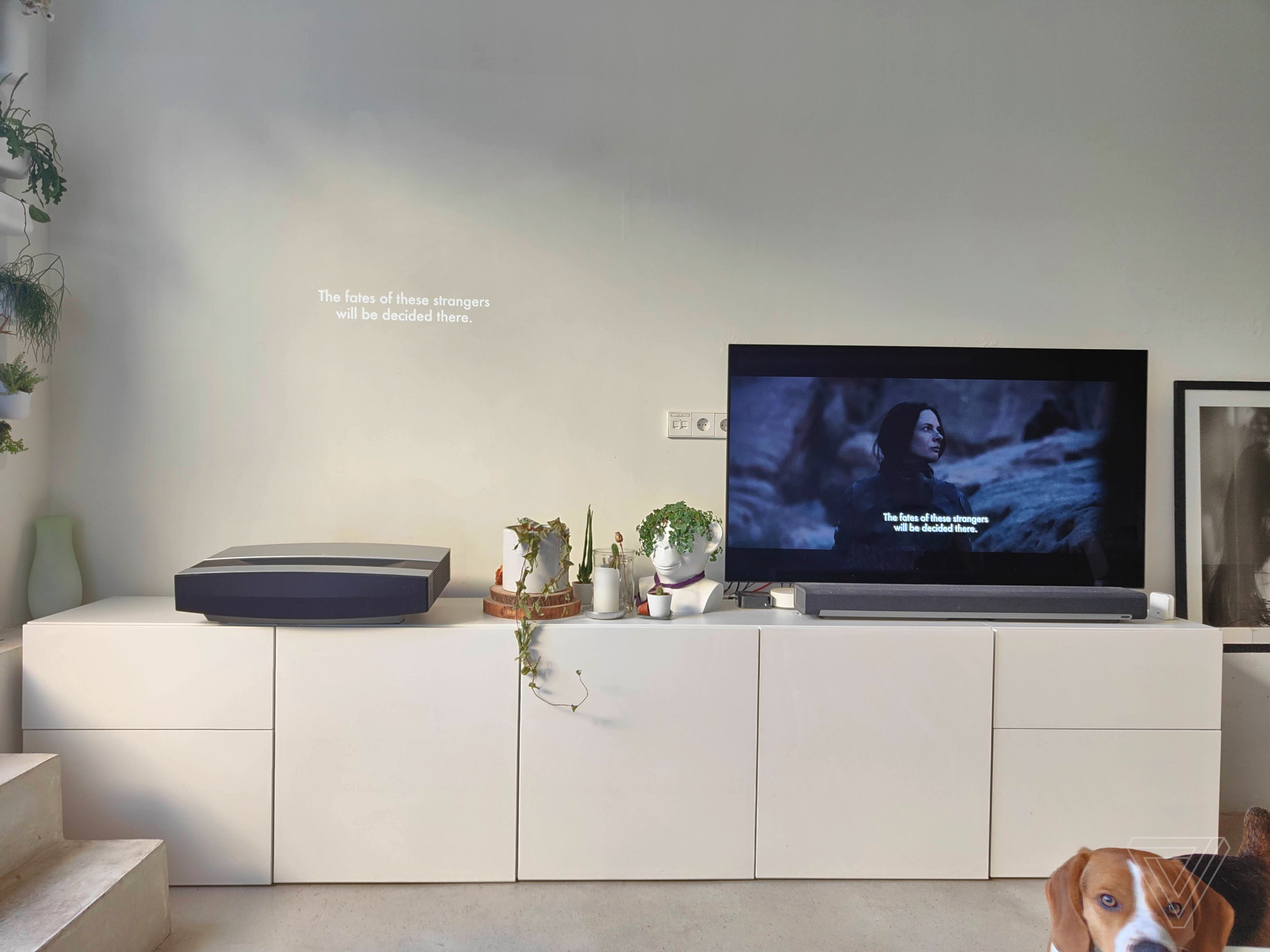 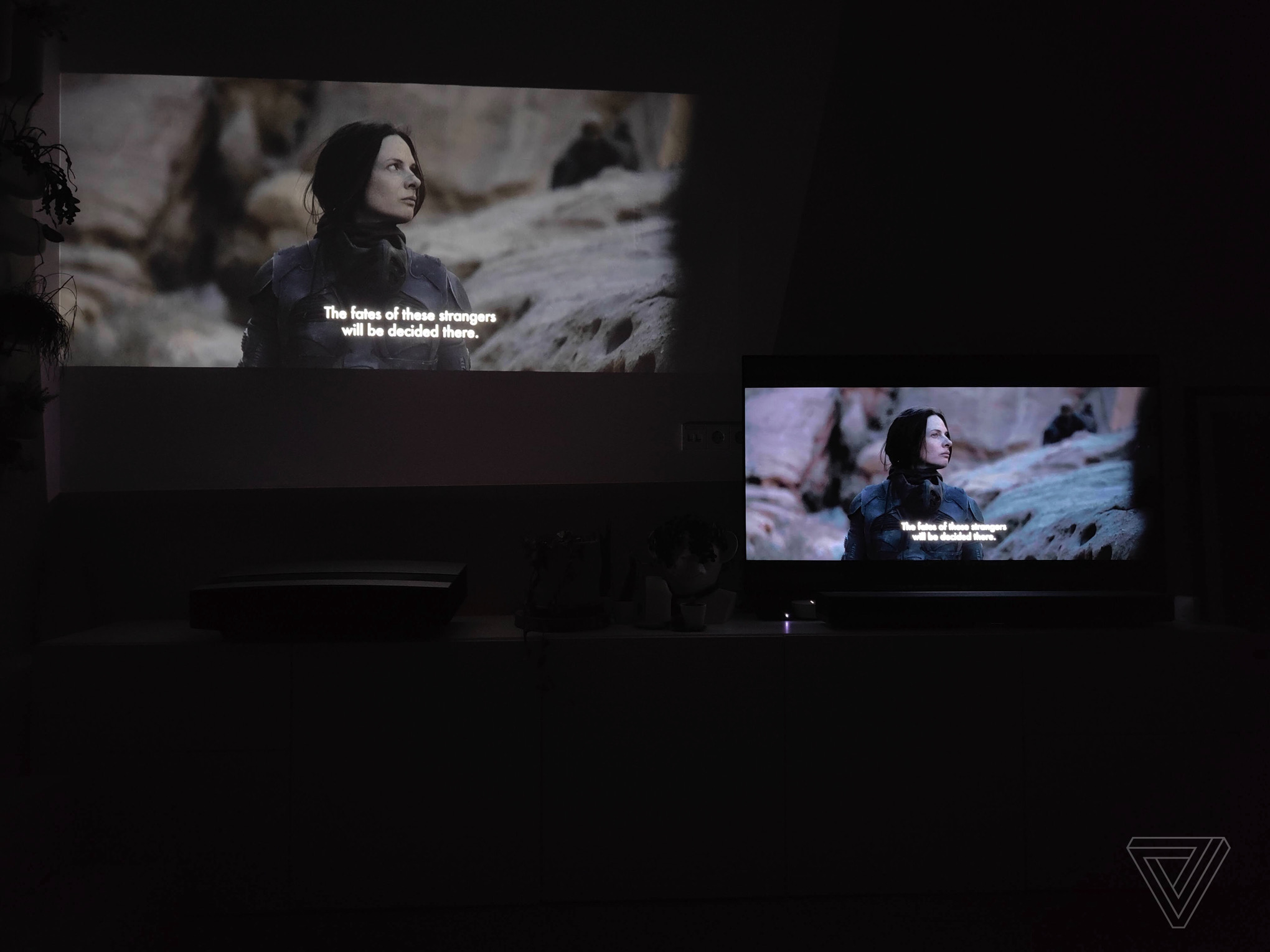 Daytime viewing with the blinds open is... bad.

It’s at night when the Aura’s giant 4K projected image really springs to life. True, blacks suffer from having to be projected over distance using light unlike my OLED TV, but the Xgimi Aura still serves up some beautiful dark scenery from films like Dune, thanks to the more spacious screen that evokes the type of cinematic experience I’ve longed for since the pandemic closed theaters. Sports also look great on the Aura when viewed in a darkened room. It should go without saying, but the bigger image makes it easier to keep track of the ball.

Watching in darkness isn’t a problem currently as the sun sets at 5pm where I live. However, I’d need blackout blinds in the summers when daylight stretches past 10pm. That’s something to consider if you live in a northern climate.

Overall, the Aura’s colors are rich, even if they tend to skew green; images are sharp; and focus is uniform throughout. And while the Aura supports HDR10, it’s simply not bright enough to produce the image-popping contrast produced by modern TVs.

Casual gameplay is also wonderful on that giant display, especially in multiplayer split-screen modes that can be cramped on even large televisions. But input latency and lack of HDMI 2.1 mean you won’t be taking home any professional esports titles.

I had to tilt my Aura review unit upward to keep a power outlet from obscuring part of the projection. This was easy to do thanks to Aura’s integrated legs that unscrew from beneath, and 8-point keystone correction to square the image again. But like all projectors, the image brightness suffers as a result at those angles while also resulting in trapezoidal light shadows that become visible in dark scenes. The ideal setup is for the Aura to be sitting flat and pointing directly at the wall.

Having the light projected from below also makes deformities in my wall more noticeable due to their respective shadows. Front-projection devices do a much better job of obscuring the holes, nicks, and undulating plaster on my 170-year-old walls. My setup would benefit from a projection screen, which would smooth out the images while improving image brightness and contrast. But that would really defeat this as a TV replacement unless I wanted to pay even more for a screen that automatically unfurls from a ceiling nook. No thank you.

Like Xgimi’s other projectors, the Aura features an integrated Harman Kardon sound system. This time it’s a beefy 4 x 15W setup (equally divided into two tweeters and two woofers) with DTS and Dolby Audio support. It’s plenty loud and yields decent audio separation that blows my LG TV out of the water. The Aura’s audio can’t compete with my usual 5.1 Sonos setup, but it does have an S/PDIF optical output for expansion, as well as a headphone jack and support for Bluetooth audio.

Fan noise from the Aura produces a light hum that’s easily noticeable. I can hear it buzz from ten-feet away as Android TV cycles through what should be silent slideshows. It bothers me when my attention is drawn to the noise, but mostly I’m unaware of it. With the display off, Aura slows the fan down to cut the noise by half. This can be useful if you want to use it as a music player, for example.

Winner: It’s a tossup, because sometimes a giant display that’s good is better than a smaller one that’s great.

The Aura runs Android TV like many smart televisions. That means plenty of streaming apps to choose from like Apple TV Plus, Disney Plus, YouTube, Amazon Prime Video, Plex, and HBO Max. Netflix, however, has still not certified Xgimi under the steamer’s proprietary Open Connect program to make Netflix streams more efficient. The app can be installed via workarounds, but even this stopped working half-way through my testing (other workarounds routinely pop-up). Fortunately, Aura has Chromecast support built-in but the experience pales in comparison to a local app, and performance is inconsistent.

For example, Chromecasting video was usually fine, but the NFL GamePass app crapped out on both iOS and Android devices. The only fix was to attach an old Chromecast dongle off an HDMI port that worked flawlessly.

The Apple TV app also errored out a few times during my testing which was only solved by rebooting the Aura.

But it really comes back to Netflix. Netflix is used by over 200 million people around the world. Spending $2,500 on a projector marketed as a TV replacement only to find out the app is missing is troubling, especially for families with small kids who don’t have phones for casting.

Over the years I proposed a variety of less ugly TV solutions to my wife only to be rebuffed. A ceiling mounted projector (don’t want to open the walls for cable runs). TV mounted to an electric lift (have to build a giant cabinet to hide it). Rollable TV (too prototype-y and way too expensive). One of those always-on TVs that pretends it’s a picture frame (do you think I’m a fool?).

The Xgimi Aura all-in-one 4K ultra-short throw projector can indeed replace a TV but only if you’re installing it in a very dark room. Even then you’ll have to put up with fan noise, no Netflix app, and an inferior (but very good) picture for the price of two 55-inch OLED TVs and a game console.

But if you really hate the idea of a giant TV ruining the aesthetic of your minimalistic living room, or you want the biggest image possible in a narrow room where a traditional long-throw projector just won’t fit, then the $2,500 Xgimi Aura is as good as it gets for the price.

To use Android TV and Chromecast on the Xgimi Aura, you must agree to: