A great laptop at the right size

When I reviewed the 15-inch Galaxy Book Pro 360 earlier this year, I concluded that it was great — but that its somewhat unique combination of a 15-inch OLED screen, integrated graphics, and a stylus at a fairly premium price point made its audience fairly specific. The package it offers is somewhat unusual in the 15-inch space.

The 13-inch Galaxy Book Pro is clearly the laptop I was looking for. Like many of Samsung’s Galaxy Books, this device has a thin and light chassis, a standout screen, and excellent battery life. Unlike many other Galaxy Books, it doesn’t come with significant compromises for those benefits, and it doesn’t cost a fortune — my test unit is $999. It comes with many of the benefits that we’d expect from a premium business laptop, but also with a consumer-accessible price tag. It’s a package of business-ready features that I’m happy to see finally available in the mainstream sphere. 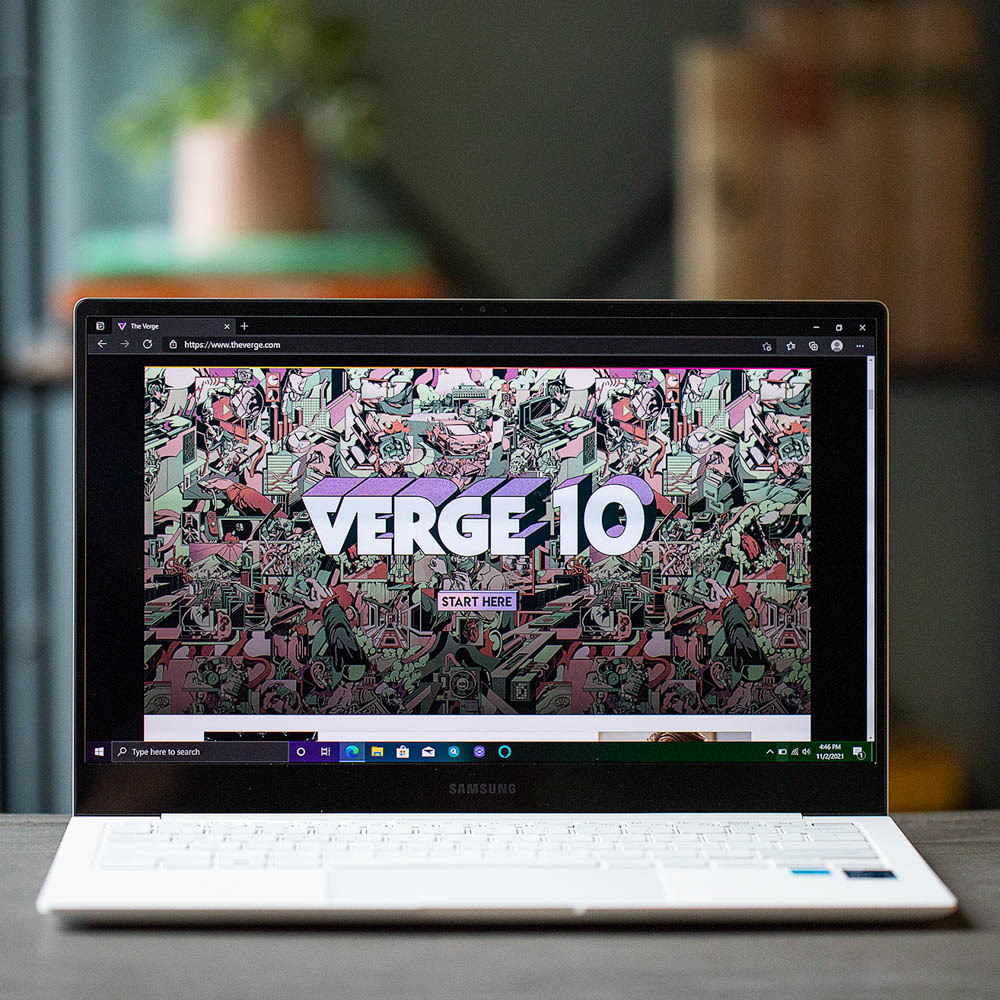 In many ways, the Galaxy Book Pro is a similar package to a Surface Laptop 4 or an XPS 13. It’s attractive, well built, and comfortable to use. But there are a couple reasons shoppers might want to go for the Galaxy Book instead. The first is its size and weight. My test unit is just 0.44 inches thick — almost as thin as many smartphones — and 1.92 pounds. This ties it with the Asus ExpertBook B9 (which is close to twice the price of my test unit) as one of the absolute lightest laptops in the world. For some quick context, the 13-inch Surface Laptop 4 is almost a pound heavier, and a 14-inch MacBook Pro is close to the weight of two of these things stacked on top of each other. You will not notice this thing in your bag; carrying it feels like carrying a small tablet around.

The second is the screen. The Galaxy Book Pro is one of few 13-inch OLED laptops you can buy (and some of the others out there have… problems), and one of the more affordable OLED devices out there, period. Note that this is a 1920 x 1080 OLED screen — it’s visibly more pixel-y than the 4K panels that you’ll often see on OLED workstations. But that hardly ruins the experience. Blacks are black, and colors are rich — the Galaxy Book covers 100 percent of the DCI-P3 color gamut and 100 percent of the sRGB gamut. And, thankfully, I didn’t see any screen wobble (which was an issue I had with the convertible Galaxy Book).

The screen’s main downside is that it’s a bit dim for this price point (as OLEDs often are), maxing out at 314 nits in my testing. This wasn’t a major problem in use, however — even around medium brightness, the panel wasn’t kicking back a ton of glare in bright settings.

Another notable drawback is that it has the 16:9 aspect ratio, which is falling out of fashion in the consumer space; the Galaxy Book’s big competitors, including the Surface Laptops, MacBooks, and XPS laptops of the world, all provide more vertical space. The screen was a bit cramped for my workload as a result, especially since it’s only 13.3 inches.

The third unique thing: there’s a whole bunch of Samsung-specific software on it that will cooperate with a Samsung phone, if you have one. For example, you can quickly move things between the Galaxy Book Pro and a Galaxy phone using the Quick Share feature and can sync up notes and the like as well. The sheer amount of OEM software on here is actually a bit overwhelming. I counted 14 Samsung-branded programs on this device — Samsung Flow, Samsung Studio Plus, Samsung Security, Samsung Settings, Samsung Care+, etc. — and I was never quite sure where to find specific settings and features. Those who are already plugged into the Samsung ecosystem may not have this problem.

One thing I did uncover in this labyrinth of apps is Studio Mode, which attempts to beautify you in real time on video calls. A little menu pops up when you turn the Galaxy Book’s camera on. There are a few different presets to choose from, which all attempt to enlarge your eyes, thin your face, and remove skin blemishes to various degrees. Without getting into the politics of this, I will note that this feature seemed effective at what it was trying to do. The only weird thing I noticed was that my face would sometimes flicker weirdly if my hand was covering part of it, possibly because the obstruction made the algorithm struggle to recognize my face.

To start using the Galaxy Book Pro (13-inch), you’ll need to agree to the following:

In most other areas, the Galaxy Book Pro is a run-of-the-mill ultrabook (which means it’s quite good). It feels a lot like using a thinner, lighter XPS 13. (Samsung nailed the keyboard texture in particular — it’s eerily similar.) The trackpad is massive, with a smooth texture and an ever-so-slightly stiff click. The keyboard is on the shallow side, but I was surprised by how much I liked it — it has a very satisfying click, and I surpassed my normal typing speeds. The one category where the Galaxy Book is a bit behind top competitors is looks; the exterior has a bit of a drab vibe that I think belies the excellence of the rest of the device.

The Core i5-1135G7 is tailor-made for thin and light laptops — despite the “Pro” moniker, this Galaxy Book is not designed for intense professional workloads, and the lack of a discrete GPU means it’s not a good choice for gaming. But it is just fine for someone like me who spends most of their time hopping around a couple dozen Chrome tabs with the occasional Zoom call or Spotify stream over top. I never heard fans or felt any kind of heat, even when I was running the device on Battery Saver.

Battery life was also good. I averaged eight hours and five minutes of work. That’s not as good as the 15-inch model, which has a slightly bigger battery, but should still get you through a full day of work, especially if you’re letting the device go to sleep rather than continuously pushing it as I was.

My feelings on the 13-inch Galaxy Book Pro are easy to sum up: it’s the perfect travel companion. It’s light, it’s well-built, it lasts a long time, and I can see the screen outside. If I’m going on a trip, there is no other consumer laptop I’d rather have with me.

The word “consumer” is, of course, doing a lot of work in that sentence. That’s because this combination of features is available in the business space and have been hallmarks of the best business laptops for years. Asus’ ExpertBook is close to this device’s weight and lasts significantly longer. But consumers travel, too, and they should have options that accommodate an on-the-go lifestyle without the exorbitant prices attached to enterprise purchases. For that reason, I’m glad the 13-inch Galaxy Book Pro exists, even if its boring aesthetic and aspect ratio mean it wouldn’t be my laptop of choice. It’s my top recommendation for anyone who goes a lot of places or anyone who just wants something really, really light.