Sony’s new WF-C500 true wireless earbuds have an appealing price of $99.99 and come with a sleeker, more traditional design than the WF-XB700 buds that they’re replacing. Aside from the reined-in looks, they improve upon that model by adding support for Sony’s Headphones Connect app, which allows you to customize the EQ to your liking. The WF-XB700s had the company’s “Extra Bass” branding, but Sony has done away with that this time for a sound that’s much more balanced out of the box. Battery life has also improved slightly to an impressive 10 hours of continuous playback, and the C500s offer easy-to-use controls with large buttons on each earbud.

But to hit that penny-shy-of-$100 price, Sony left out some major features like noise cancellation, a transparency mode, wireless charging, and even smaller conveniences like automatic pausing when you pull out one or both earbuds. You can often find these useful tricks in similarly priced buds, which can leave the C500s feeling like Sony omitted a little too much. 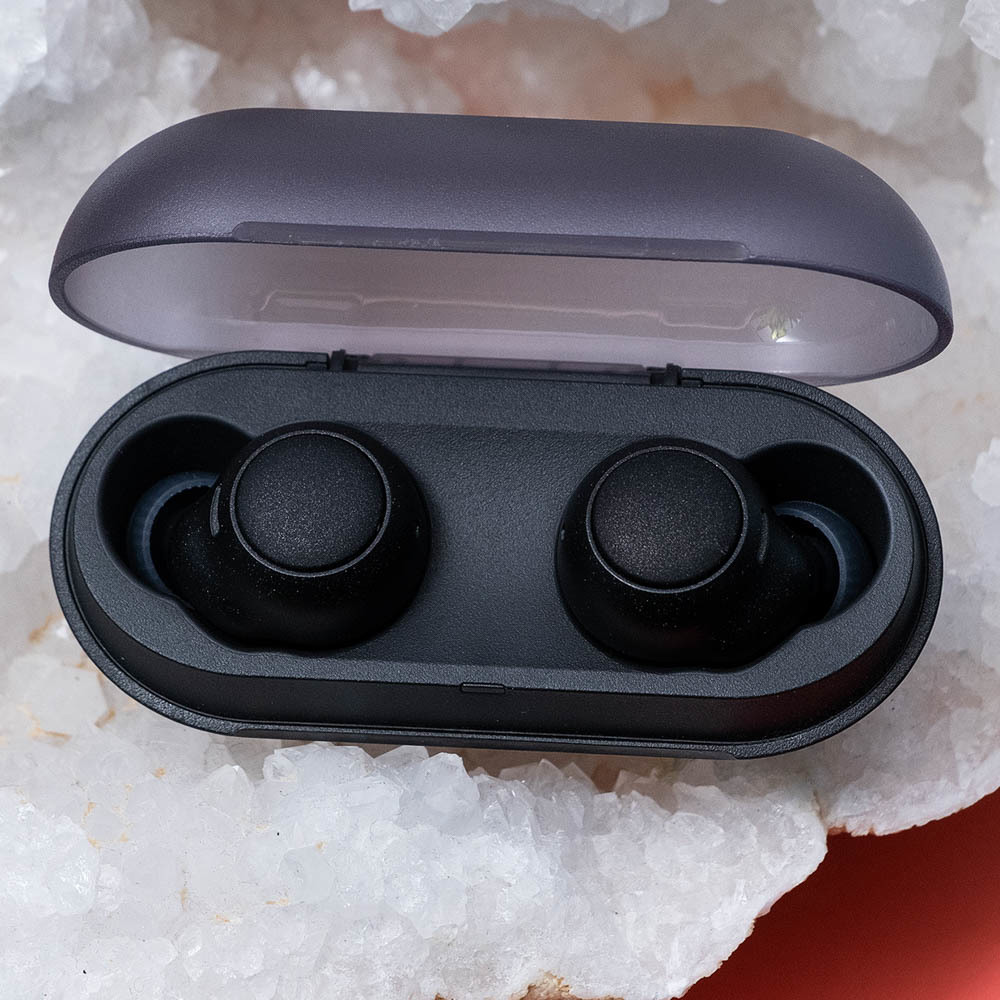 That said, they still sound very good for the price; Sony rarely skimps on audio quality. And while I was worried that switching to a smaller, more discreet physical design would sacrifice the anchored-in-my-ears feeling that the XB700s gave me, thankfully that’s an area where these earbuds continue to be a standout. The question you’ll need to ask yourself is whether those pluses are enough to make up for what’s missing. Where Sony’s 1000XM4 earbuds are a lavish luxury, this set is about as basic as they come.

Before I get to the earbuds themselves, a few words on the charging case: Sony has downsized it significantly into a more pocketable pill shape. The bottom is still flat, so the case sits nicely on a desk or table even when the lid is open. I also really like that Sony carried over the semi-translucent lid from the XB700s, which makes it easy to see the three amber LEDs inside — one for each bud and the case — and be certain that everything is charging properly.

Opening it with one hand can be challenging since the lid uses resistance rather than magnets to stay closed, but it’s not impossible if you push up from the thin indent running along the lip. The case still uses textured matte plastic all around, and while some view this as cheap, I like that it eliminates any potential for scratches or scuffs. There’s a USB-C port around back, and the case has enough juice for one full recharge of the C500s, bringing them from 10 hours of playback to a total of 20. Most earbud charging cases have at least two additional charges’ worth of battery in them, so Sony’s behind the curve there. You can also count out wireless charging, which Sony seems to reserve for its upper-end earbuds.

The XB700s had a very distinct design that, even at the time, was on the larger side for true wireless earbuds. They also noticeably protruded from my ears. The reason behind the unconventional shape was that it allowed them to twist deeply into the ear canal for a very stable fit and optimal bass response. I liked the fit, but not everyone found them equally as comfortable. With the C500s, Sony is making the latter a priority.

They’re still matte all over but are now more compact — smaller than the flagship noise-canceling WF-1000XM4 earbuds — and don’t demand as much space in your ears when inserted. The overall look is close enough to Sony’s premium models to make them both seem part of the same family, though you lose the flashy copper accents.

Instead of a touch-sensitive outer surface for controls, the C500s have a large, physical button on each bud. This is a vast usability improvement over the tiny nub that was located at the bottom of each XB700 earbud. The controls remain unchanged (and can’t be customized). The left earbud controls volume: a tap increases it and holding down will gradually lower it. Track controls are on the right earbud: tap once for pause / play, press twice to skip tracks, and three times to go back. Holding the right bud will summon your phone’s voice assistant. Once you get the functions down, they’re easy to remember, and the buttons are clicky enough that you don’t have to forcefully press them (and jam the buds uncomfortably deep into your ears) just to activate the controls. Unfortunately, Sony omitted the common auto-pause feature when you remove one or both earbuds.

Three sizes of silicone tips are included in the box. The large size worked about as well as I could ask for, providing a good, reassuring seal and decent noise isolation. Even though they don’t screw into my ears in the same way as the XB700s, the C500s never budged or came loose whether I was eating, talking, or running with them in.

As is typical for Sony buds, the sound doesn’t disappoint. While the C500s lack the expansive, rich soundstage (and powerful noise cancellation) of the company’s flagship 1000XM4s, they come with an excellent, fairly balanced tuning out of the box. The 5.8mm drivers have nicely controlled bass — brought down a rung or two from the Extra Bass XB700s — detailed highs, and well-defined mids that bring vocals through on Taylor Swift’s Red rerecording with clarity and presence. Unlike Sony’s previous entry-level earbuds, you can customize the EQ on these if you do want to crank up the lower frequencies or give the treble a little more room to breathe.

To my ears, the C500s sound better and fuller than Jabra’s slightly cheaper Elite 3 earbuds, but the Jabras outdo Sony at noise isolation and also have a transparency mode for hearing your surroundings (or your own voice when on calls). Other similarly priced competition like the Nothing Ear 1s have a more lively V-shaped EQ out of the box, but I like how flexible the Sonys are with customizing your preferred sound. You won’t get the ANC that comes with the Nothings or slightly pricier buds like Anker’s Liberty Air 2 Pros, nor is Sony’s higher-quality LDAC codec supported on the C500s. But the company does at least toss in a small helping of extras like 360 Reality Audio support and the freedom to use either earbud alone.

You can use Sony’s WF-C500 earbuds via Bluetooth without clicking through any agreements. But if you want to use the Headphones Connect app on Android or iOS, which is necessary for EQ customization and adjusting settings, you’re agreeing to:

You can also opt into letting Sony collect data from your usage of the Headphones Connect app, which the company says is for the purpose of improving its products and services.

Together, you get three optional agreements.

But voice call quality isn’t a strength for Sony’s entry-level buds, and the experience can be rough in noisy environments. If you’re chatting with someone from a quiet room, they’ll do the job. But my colleagues on The Verge reviews team cringed and laughed — unable to make out a word I said — when I attempted using them on our weekly Zoom meeting at my crowded local coffee shop. AirPods or Galaxy Buds 2, these are not. I don’t expect groundbreaking clarity for $100, but Sony should be aiming higher here.

Even with poor call quality, as a complete package, the WF-C500s cover the other fundamentals without any glaring tradeoffs or flaws. You can find earbuds that pack in more features for the money, but these Sony’s are dependable, easy to use, last for long listening sessions, and have a sound that punches beyond their price. They’re also more compact and stylish than the oddball WF-XB700s that preceded them while maintaining a great in-ear fit. If all you care about is getting a basic set of earbuds that work consistently and sound good in the process, you can save a heaping of cash and go with Sony’s basic buds. Sometimes less is more — unless you want noise cancellation or other features that demand a higher price. It’s fair to have some pause and consider what you’re giving up, but if you can snag the C500s on sale (at press time they’re as low as $68), they’re far from the worst impulse buy you’ll ever make.