Sony Glass Sound Speaker review: it’s not what it looks like

A mood-setting novelty speaker that doesn’t slouch on sound

Every so often, you get a reminder that Weird Sony is still alive and well. The company might be releasing best-in-class wireless earbuds, gorgeous OLED TVs, and premium soundbars, but it also still dabbles in unusual gadgets that stand no chance of appealing to a mass audience.

It’s fair to say that the $350 LSPX-S3 Glass Sound Speaker is exactly that kind of product. A combined portable Bluetooth speaker and candlestick-like table lamp, the LSPX-S3 is by no means designed for the everyday consumer. It’s not supposed to be your rugged, take-anywhere speaker. It’s a statement piece that could add ambiance to a romantic dinner, a bedside table, or a meal outside on a summer evening. Sony sees enough in this concept to have kept at it for three generations now.

Our review of Sony LSPX-S3 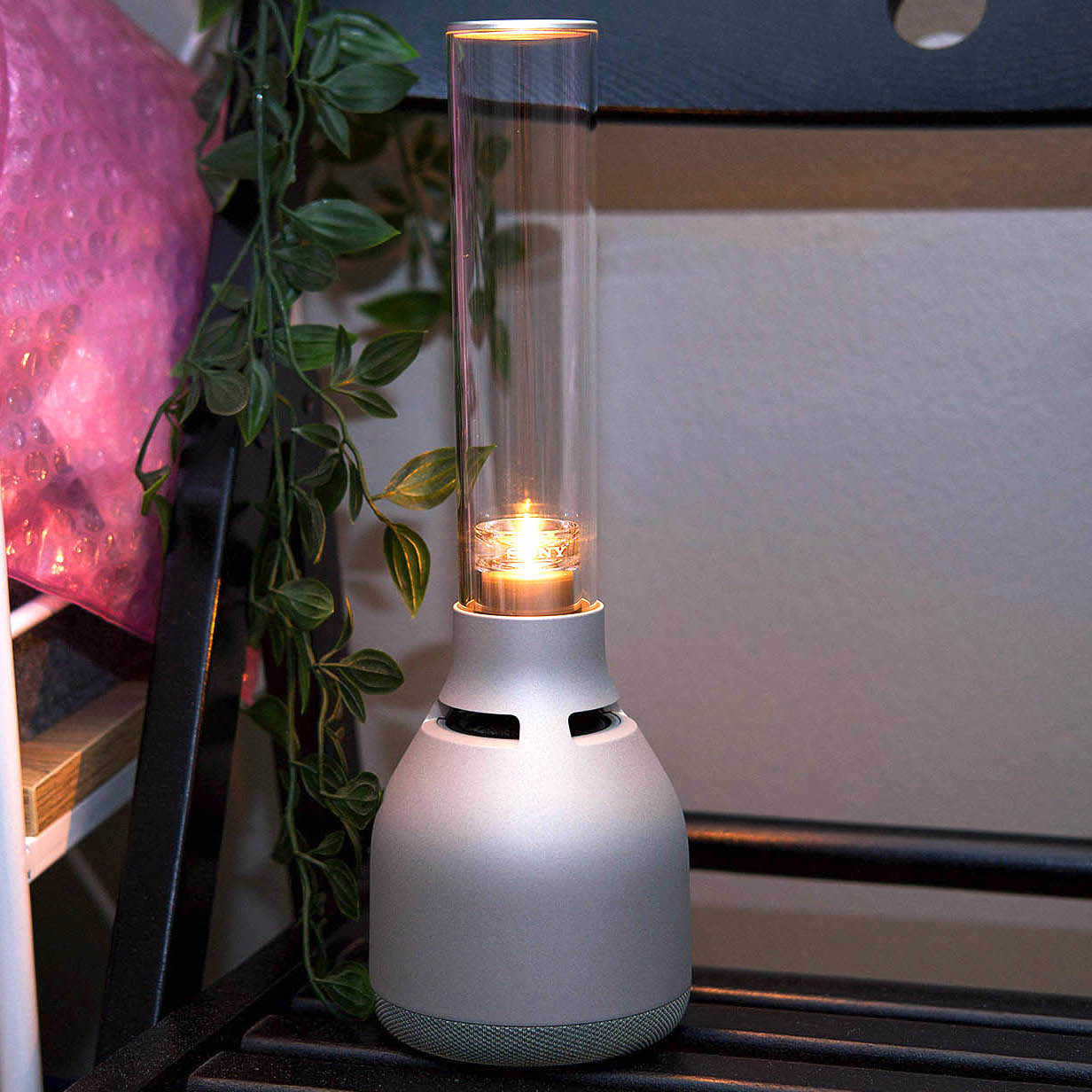 The LSPX-S3 stands slightly over 11 inches tall and is heavier than it looks at 2.5 pounds, with most of that weight residing in the very sturdy-feeling silver metal base. The heft is reassuring in that there’s little risk of the device tipping over accidentally. You could say the Glass Sound Speaker gives off futuristic oil lamp vibes, maybe, but most people I’ve shown it to have immediately concluded that it most closely resembles a bong. It’s certainly a conversation starter, but any potential appeal will come down to your own taste. To me, this looks like a speaker that belongs in a lake cabin or an art studio. It might feel a little out of place in some contexts.

Around back, near the bottom of the base, you’ll find a USB-C port for charging the battery and buttons for power, answering a phone call, and controlling the volume. Sony includes a short USB-C to USB-A cable in the box but no power adapter. Under the speaker are additional buttons for Bluetooth pairing and setting a sleep timer. On Android, the LSPX-S3 supports Fast Pair for easy setup. Perhaps most surprising is that Sony also includes its higher-quality LDAC codec among the speaker’s features, allowing you to play music at higher bitrates from services like Amazon Music, Apple Music, Tidal, Qobuz, and others that offer lossless audio. LDAC might seem like overkill for a speaker of this relatively small size, but I’m glad to see Sony extending it to more products — especially considering the price premium of this one.

The glass tube isn’t there purely for aesthetics. According to Sony, three actuators in the speaker are attached to the end of the glass and vibrate the entire glass tweeter when audio is playing “to spread sound in every direction.” And if you’re holding the LSPX-S3 in your hands, it really can sometimes seem like the sound is originating from the tube rather than the base beneath it. But I can’t overlook that there’s an inherent fragility to this design that isn’t present with other portable speakers made from more durable materials.

You can adjust the brightness of the LED but not the color temperature; it’s meant to always mimic the warmth of candlelight. The first mode lets you choose a fixed, consistent brightness by sliding your finger along a touch sensor on the back of the speaker. (There are 32 levels of brightness in all.) Switching over to candlelight mode makes the LED gently dim and illuminate like the flickering of a candle. You can also have the light pulse in sync with whatever music is being played, though this effect is more subtle than you might imagine.

It might be portable, but this isn’t a speaker you want to drop

The LSPX-S3 plays the role of a candle well enough that its flickering would have you think it was the real thing if it was off to the side of a table during dinner. I found it pleasing, but you’d hope it could pull off that trick for the price Sony’s asking. Even at its highest brightness setting, you should only expect ambient lighting from the Glass Sound Speaker; it’s not some high-intensity household lamp.

So it does the job as a candle replacement, but how does it rank as a speaker? Better than I expected before I turned it on, honestly. Sound is distributed evenly in all directions, and the LSPX-S3 has enough power to fill small rooms with tunes. Where this speaker really shines is in its upper register. Acoustic guitars, other string instruments, and brass all come through with a fantastic, crisp clarity — and the same holds true for vocals. That’s where the glass tweeter really makes a difference. There’s no muddiness whatsoever to the sound.

That said, the speaker is limited by its size and the space constraints that Sony faced when filling it with driver components. The soundstage isn’t all that wide, and this means that some genres (acoustic, classical, jazz, etc.) are better suited to get the most out of this speaker than others like rock, pop, electronic, or hip hop. Having just seen them in Brooklyn a few weeks ago, I’ve been on a Hold Steady kick, and the LSPX-S3 doesn’t have quite enough presence to make their records shine. The keyboard and other instrumentation can get drowned out in the cramped mix output. Bass isn’t going to rattle surfaces, but Sony does include a bass boost toggle in its mobile app if you want to crank that part of the EQ as much as possible. Sony’s glass speaker has more clarity to it than many Bluetooth speakers, but bigger units can definitely outperform it on the boom factor.

You’ll get up to eight hours of battery life from the speaker on a charge, which seems perfectly sufficient for its indoor or backyard use cases. This isn’t the kind of product you’ll be taking on the road, so it doesn’t exactly need to match the 15-hour battery of a UE Boom.

For whatever good traits it has, the LSPX-S3 is unfortunately missing a lot. There are volume buttons but inexplicably no play / pause or track controls. (The buttons are also located on the back, which is nice for looks but more of a hassle for usability.) This speaker lacks any voice control “smarts.” It only does playback over Bluetooth and not Wi-Fi, leaving out features like Apple’s AirPlay 2, Google Cast, or Spotify Connect. You can group two glass speakers together as a stereo pair, but I can’t in good conscience recommend that anyone burn $700 on that proposition: you can do tons better for the money by sticking with more traditional speakers.

You can use Sony’s Glass Sound Speaker over Bluetooth without clicking through any agreements. But if you want to enable bass boost, you’ll need Sony’s Music Center app for Android or iOS. By using that, you’re agreeing to:

You can also opt into letting Sony collect data from your usage of the app, which the company says is for the purpose of improving its products and services.

In total, you get three optional agreements.

But that brings us back to this being a Weird Sony product that isn’t aimed at someone shopping for a “normal” Bluetooth speaker. Sony itself sells plenty of those for less money, as do brands like Ultimate Ears, JBL, Bose, and countless others. The LSPX-S3 Glass Sound Speaker is one of a kind, and its candlelight-mimicking capabilities make it the best execution of this concept so far. That doesn’t mean I’d buy it, but if you’re itching to put this thing in your dining room or in a getaway cabin, there’s nothing wrong with getting lavish and weird sometimes.