Chrome OS tablets are getting fancier but not better

HP and Lenovo are aiming higher with their latest tablet Chromebooks

Share All sharing options for: Chrome OS tablets are getting fancier but not better

If you go looking for a new Chromebook, you’ll find a lot of traditional clamshell laptop designs and some convertible models with 360-degree hinges. You may also find a couple tablet-first options, with thinner, lighter designs and detachable keyboards.

These tablet models run Google’s Chrome OS software but mimic the hardware of Microsoft’s Surface Pro or Apple’s iPad. They often come with a keyboard and case that includes a built-in kickstand. Most support stylus input (using the USI standard, common across many modern Chromebooks); some even come with one in the box.

Like a lot of other Chromebooks, many Chrome OS tablets are inexpensive, such as last year’s excellent Lenovo Chromebook Duet. But this year, there are two Chrome OS tablets that aim a little higher, with nicer features, better specs, and correspondingly higher price tags. HP’s Chromebook x2 11 features a modern, all-metal design, high-res 3:2 screen, and $599 price tag (though it’s frequently on sale for significantly less than that). Lenovo’s Chromebook Duet 5 has a larger, OLED display, slightly better specs, and equally portable design and sells for $499. (One mustn’t forget the ill-fated Pixel Slate that was so bad Google itself stopped making tablets entirely, but for the sake of this piece let’s forget about it.) These tablets aren’t trying to compete with Apple’s base iPad — they’re aiming for the iPad Air or iPad Pro shopper and maybe even someone who’s considering a Surface Pro.

I’ve been testing both of them to determine if either of them are compelling alternatives to an iPad or Surface or if you should just stick with a traditional clamshell Chromebook instead.

Our review of HP Chromebook x2 11 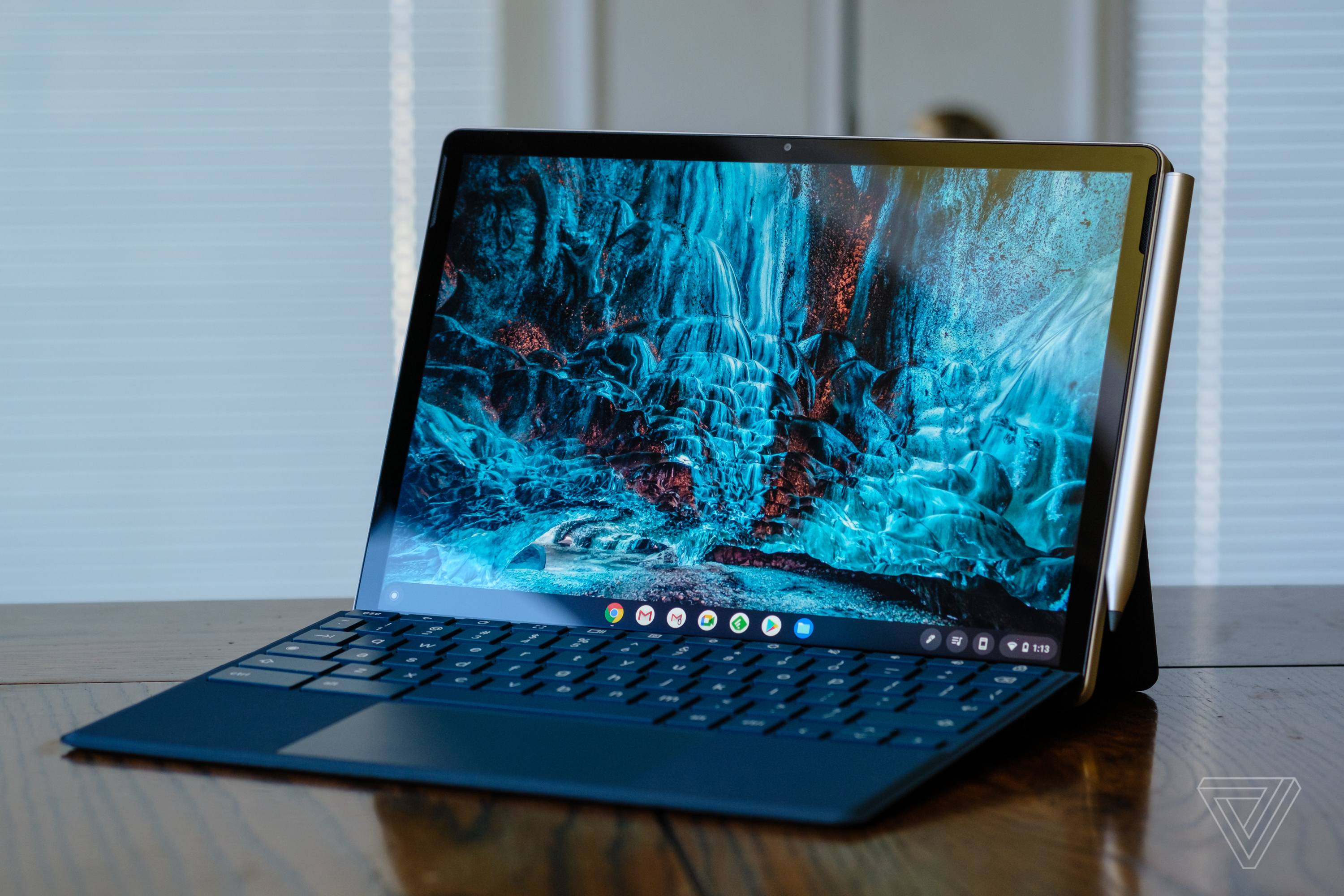 Our review of Lenovo Chromebook Duet 5 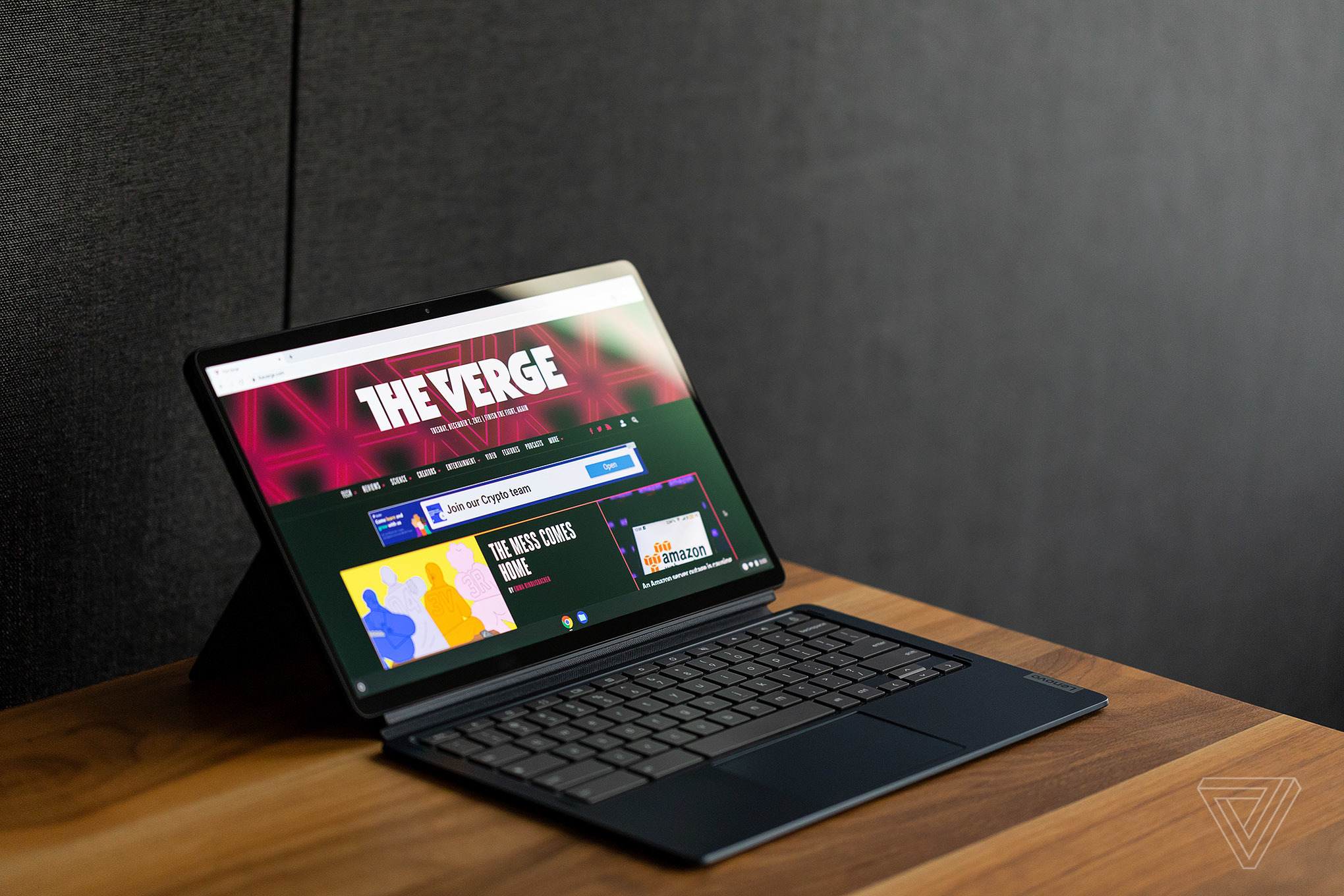 The HP and Lenovo share a lot of design traits. They are thinner and lighter than the typical Chromebook, and both have magnetic detachable keyboards and back covers that double as kickstands. (Neither back cover provides much in the way of protection — I managed to crack the screen of the HP when it accidentally slid off my desk, while the keyboard cover on the Lenovo slides around a bit when it’s closed.) Both include two USB-C ports for charging and peripherals (on either side of the Lenovo, both on the left for the HP), and both lack 3.5mm headphone jacks. Even their case and keyboard accessories are both available in a shade of dark blue.

The HP has an 11-inch, 2160 x 1440 pixel 3:2 LCD touchscreen. The Lenovo has a lower-res but larger 13-inch, 1920 x 1080 OLED touchscreen in the more rectangular 16:9 aspect ratio. Neither have the fast-refresh rate screens of Apple or Samsung’s highest-end tablets, but they both compare well enough to other tablets in their price range. Though I much prefer the HP’s aspect ratio for tablet use, it’s hard to deny the appeal of the Lenovo’s screen, which, like most OLED panels, is punchier, brighter, and generally just nicer to look at, especially for watching video. The contrast levels of the Duet 5’s screen are much better, the colors are more appealing, and things like video and movie watching are just more enjoyable on the Lenovo over the HP.

The HP has two front-facing speakers (similar to Microsoft’s Surface Pro), while the Lenovo adopts iPad-style side-mounted speakers. Both are serviceable, but neither sound all that great compared to an iPad Air, with thin, sometimes distorted sound. I preferred to use headphones (wireless, of course, thanks to the lack of headphone jacks) with both, save for the occasional impromptu video call or short YouTube video.

Inside, the similarities continue. Both of these tablets have Qualcomm ARM processors — the Snapdragon 7c Gen 1 in the HP and the 7c Gen 2 in the Lenovo — paired with 8GB of RAM. Though the differences between the two generations of the 7c chip are quite minor, the Lenovo is noticeably snappier and more performant than the HP. I’m not sure if it’s down to the difference in resolution (the HP does have more pixels to push) or just general optimization, but the Lenovo stuttered and lagged far less than the HP in almost everything I used it for. Neither felt as smooth and fluid as a modern iPad, and traditional mid-range Chromebooks with Intel processors, like our current fave, the Acer Chromebook Spin 713, will run laps around both of these tablets. Still, both tablets were able to handle my typical workload of multiple virtual desks, lots of browser tabs, chatting in Slack, watching YouTube videos, and taking Zoom calls without much issue.

Both the HP and Lenovo provide battery life that’s closer to what you might expect from an iPad than a traditional laptop. Even when used for work, which consisted of constantly browsing many websites, chatting in Slack, taking Zoom calls, watching YouTube videos, and more, both tablets were able to last beyond a standard day, reaching between 10 and 12 hours between charges. The Lenovo was able to edge out the HP by just a hair, but both have better than average battery life when used as laptops. One note, though: if you leave them unattended for a few days, they will likely have dead batteries when you pick them up again.

The best Chromebook for 2021

I am prefacing this section with the statement that Chrome OS is not a very good tablet operating system. Though it works quite well for desktop (or, more accurately, laptop) work, Chrome OS is nowhere near as refined or optimized for tablet use as iPadOS or even Android. Animations and interactions are awkward and stuttery, navigation can be confusing, and it’s very clear that the tablet mode was shoe-horned on to an interface that was designed to be navigated primarily with a mouse and keyboard.

While you can install Android apps on both of these tablets, a lot of popular apps aren’t available (such as Microsoft’s entire Office suite) or don’t work particularly well (Slack, Kindle). Many apps are also poorly optimized for larger screens (a problem shared with Android-native tablets) with poor touch response and small tap targets. Then there are other strange app limitations: for example, Netflix only supports 480p streaming through its app on a Chromebook. These limitations and hiccups are more acceptable on a tablet that’s less than $300; they’re much less so when you’re spending half a grand or more. I’d much rather use an iPad for tablet-focused tasks over either of these devices.

That said, the HP does work better than the Lenovo for hand-held tablet use. Its smaller size and more manageable aspect ratio are much easier to hold in portrait mode for reading, whether you’re perusing an article, email, or Kindle book. It feels more like an iPad than the Lenovo, likely because it’s shaped much more like one.

The HP also has a fingerprint scanner, which makes it much easier to just pick up and log in compared to the Lenovo, where you’re required to tap out a password or PIN code to unlock it. It’s baffling that biometric authentication is still an exception to the rule with Chrome OS devices, especially ones that cost as much as these do. (The Duet 5 does support linking an Android phone and logging in through that device’s biometrics, but I was unable to get it to work with my Samsung phone, and requiring a specific phone to have biometric login is ridiculous. Just build in it.)

Both tablets support USI styli, but only the HP comes with one in the box. The stylus conveniently snaps to the side of the tablet and charges there, much like an iPad Air and its Pencil. Though the stylus works fine for occasionally jotting down notes and doodling, it’s far from as fluid or precise as Apple’s. And if you’re hoping to use it with a variety of third-party apps, your options are limited (for example, it’s barely functional with Microsoft’s web-based version of OneNote).

But when you want to use these tablets as laptops, with their attached keyboards and the Chrome OS desktop interface, the Lenovo pulls ahead easily. Thanks to its larger size, the keyboard is much more comfortable to type on than HP’s. On the other hand, neither design worked very well on my lap, but the HP’s keyboard was particularly frustrating there: it flexed very easily, causing errant trackpad clicks whenever I rested my palms on it.

Conversely, the Lenovo’s keyboard was a joy to type on, with excellent spacing, nice travel, and satisfying feedback. It’s the one I chose when it came time to type up this article, and I’d absolutely select it if I had to use a Chromebook for remote schooling. It still works best when it’s on a flat surface, like a desk or table, and while it’d be great to have backlighting (the HP keyboard also lacks a backlight), in general, I really like this keyboard.

The trackpads on both models can be classified as “fine.” They are large enough to use multi-finger gestures, and they generally have good tracking and palm rejection. But neither will blow you away.

The Lenovo’s larger screen also makes working on it in laptop mode easier. Though its 16:9 aspect ratio is cramped vertically, it’s easier to compare two documents or web pages side by side compared to the HP’s overall smaller display.

The Lenovo’s noticeably better performance also makes working on it in laptop mode much easier. I can load web pages faster, switch between apps and virtual desktops quicker, and generally go about my day with less interference than when I’m using the HP.

When it comes down to it, the Lenovo Chromebook Duet 5 is easily the tablet I’d choose between these two models. It’s got a nicer-looking screen, a lower price tag, a more comfortable keyboard, and better performance.

In fact, I’d go as far as saying you shouldn’t buy the HP at all at its regular price of $600. If you see it heavily discounted — this fall, it’s dropped to as low as $350 — that’s a different conversation, but at its regular price, it’s a very poor value. The Duet 5, however, feels like it’s priced more accurately: $500 for a very portable device with an OLED screen that can be used for work or school and occasionally for entertainment seems like a decent enough deal to me.

But before you jump on either of these devices, I’d strongly consider if a tablet is the right Chrome OS device to buy at all. For around the same price or even less, you can get a clamshell or 2-in-1 Chromebook that may be a little thicker and heavier but works a lot better and can even be used as a tablet in a pinch.