These earbuds are onto something, but the execution isn’t there yet

I know what I want from a sleep gadget. I want something that’s going to help me drift off to slumberland, mask my husband’s snoring, wake me up on time, and tell me how well I slept. So far, most sleep tech I’ve tested falls into two categories: health trackers meant to track the quality of your sleep and audio-based devices meant to help you fall (and stay) asleep. I’ve yet to find a single device that merges these two categories well. So I was cautiously optimistic about finding the $249.99 Kokoon Nightbuds — a pair of earbuds that promises to do all this, with some added perks like adaptive audio and the ability to choose your own content.

In a nutshell, the Nightbuds are what you’d get if you crossed the Calm app with the Bose Sleepbuds II and the Oura Ring — a chimera of existing sleep tech and all I’ve ever wanted. However, these are headphones, and after years of testing a hodgepodge of sleep devices, wearable sleep gadgets struggle to get the right mix of comfort and battery life. This includes wrist-based trackers, but earbuds have their own challenges. Without a slim profile, you end up with uncomfortable inner ear pressure, distracting noises from friction, and buds randomly falling out mid-sleep. As for battery life, what good is noise-masking if it craps out when my dog decides to fight the cat during her 3AM patrol of the bedroom? I can’t tell you how many mornings I’ve woken up groggy, searching under the bed for a missing AirPod Pro with zero percent battery.

Our review of Kokoon Nightbuds 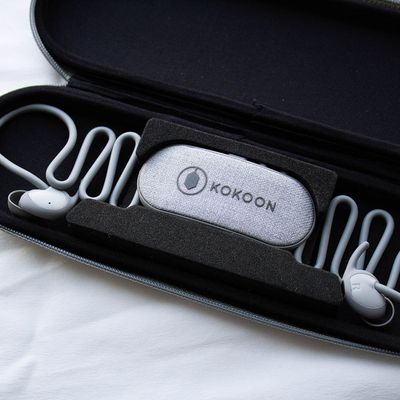 The Nightbuds surprised me on the comfort front. The buds themselves are thin at 5.4mm and fit snugly in your ear. It also comes with a variety of ear tip sizes, and I didn’t have trouble finding a size that fit me best. The neckband design raises some questions, though: would I have to detangle the squiggly wires from my hair? Would the control box feel odd against my neck? I was pleasantly surprised that neither was an issue. That said, there’s an adjustment period. The first night I found the Kokoon at the foot of the bed under the blankets, probably because I ripped them off while sleeping because they felt weird. After a few nights, I didn’t have that issue anymore.

Battery life was less impressive. The Kokoon is rated for a minimum of 10 hours per charge. In practice, it lasted me about two nights. The Bose Sleepbuds II have a similar battery life, but the case doubles as a charger, so you don’t have to plug anything in for at least 4–5 days. A similar case would’ve been nice here.

Content can make or break audio-based sleep tech. It’s a big reason why apps like Calm and Headspace are so popular. This is where the Kokoon Nightbuds both shine and disappoint. The MyKokoon app’s library is thin, and what programs I did listen to also weren’t outstanding. They get the job done, but I’ve seen better versions across a ton of apps, other sleep gadgets, and YouTube.

The audio content is divided into four categories: Going to Sleep, Feeling Anxious, Disrupted Sleep, and Brighter Mornings. Brighter Mornings is meant to get you jazzed when you wake up, but there are only two options, both under three minutes. I listened to both before I even finished brushing my teeth and washing my face, and I’m not gonna listen to the same sessions every day. There’s a better selection in the other categories, but too many overlap. It wasn’t helpful that a session in the sleep section asked me to find and focus on an object in the room when I was lying in the dark with my eyes closed.

That session was probably meant for daytime use, but the Nightbuds aren’t great daytime headphones. You can use them as normal earbuds — it even has a mic for calls. However, it wasn’t worth it. You have to charge more frequently, and the volume controls are inconveniently located on the back of your neck. As for sound quality, it’ll do in a pinch, but this isn’t what I’d reach for if I wanted to sound crystal clear on calls or really appreciate my music. Plus, I’d feel less comfortable using this in an office setting or out and about.

Ultimately, the lack of content isn’t the worst because the Nightbuds let you play your own audio. I can open the Calm app and play one of their Sleep Stories while also playing a soundscape I like from the MyKokoon app. I can even listen to my own playlists! This was one of my biggest frustrations with the Bose Sleepbuds II. While the Bose also has a flat profile and a better library of sleep sounds, they don’t actually pair with your phone for audio, so meditations or audiobooks are out of the question. All the sounds are preloaded, meaning you’re limited to whatever’s in the Bose Sleep app.

Ultimately, the lack of content isn’t the worst because the Nightbuds let you play your own audio

But my favorite feature is the Nightbuds fade out your audio after it detects you’ve fallen asleep. This is a feature tons of sleep apps have, but what sets it apart is that once you’re snoozing, the MyKokoon app will shift over to one of three options for colored noise (pink, white, and brown, to be specific). In-ear noise masking is more effective than regular white noise machines, and if you want to go a step further, you can program the device to wake you up, too. In practice, it’s more convenient than cobbling together multiple devices to do the same thing. But while the audio fade worked for me, the alarm wasn’t useful. In all my testing, not once did these buds successfully wake me up when they were supposed to.

This brings me to the buds’ most disappointing feature: sleep tracking. Several nights of sleep weren’t actually tracked or failed to sync in the app. Kokoon CEO Tim Antos told The Verge in an email that the company is aware of these issues and plans to push a fix in the coming weeks. However, the data from nights that did get tracked weren’t helpful, either. That’s a bummer since this does have an optical heart rate sensor in the right earbud. Theoretically, that should get you more precise heart rate tracking, as the ear is one of the best locations for optical sensors. But, the app doesn’t make use of the fact it tracks heart rate or heart rate variability, a popular recovery and stress metric, outside of sleep stages.

Take my most recent results. The MyKokoon app says I got 90 percent sleep efficiency and shows me a pie chart of my sleep stages. That matches the Oura Ring, but the ring also gives me extra context that my readiness is low since I went hard during a run at a later time than usual. I got the same advice from the Garmin Fenix 7S, which also rated my sleep as “restless” and “fair.” The latter two are much more helpful for planning my day.

There’s another “Insights” tab that looks at your sleep over time, but again, the data is oversimplified, and I can’t actually see my history beyond two weeks. This would be fine if you’re just looking for a bird’s eye view of your sleep patterns, but it’s too barebones if I want to see how my long-term habits impact my sleep.

I could overlook the Nightbuds’ flaws if it weren’t for the price. At $249.99, the Kokoon Nightbuds are too expensive for the overall experience to be this mixed. The Bose Sleepbuds II are equally as pricey and don’t do as much — but at least they deliver a polished product and do their main schtick extremely well.

I so wanted this Voltron of a device to deliver on all its promises. However, I ended up with a device with a great concept and middling execution at a price I don’t want to pay. Perhaps a future version of the Nightbuds will smooth out all the kinks, and I’ll get that mythical do-it-all sleep gadget. But, for now, the hunt continues.

To use the Kokoon Nightbuds, you’ll need to pair them with your smartphone. That means agreeing to its terms of use, privacy policy, and any other permissions you may grant.

By using the Kokoon Nightbuds, you’re agreeing to these mandatory policies:

Final Tally: Whatever your phone requires, two mandatory Kokoon policies and Bluetooth access. There are also two optional access requests and the terms and policies associated with other apps you may use to play content.